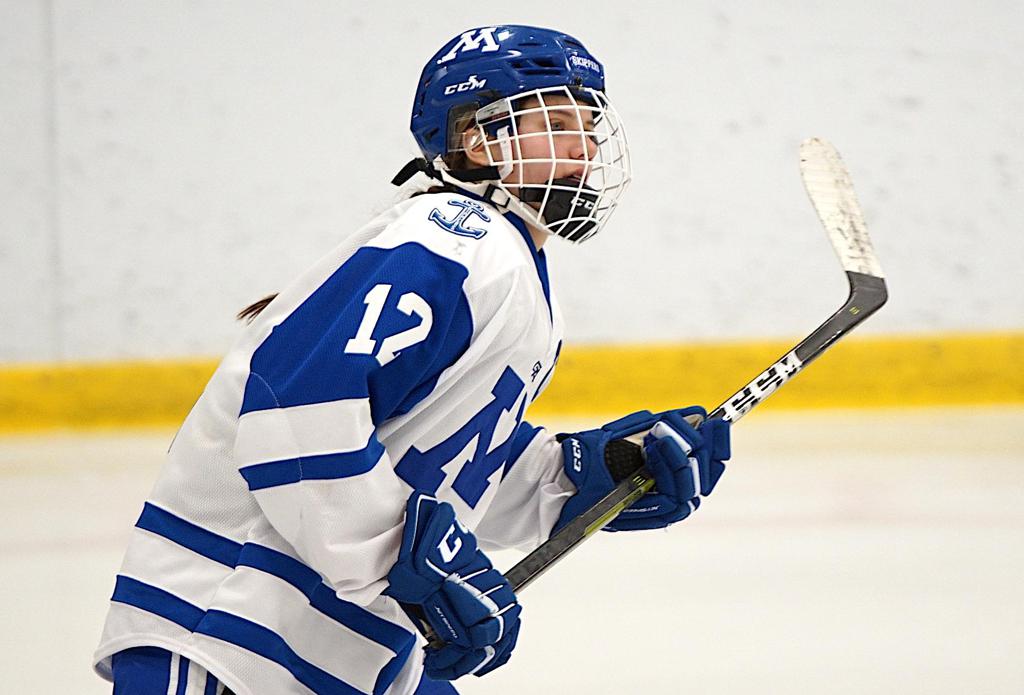 Minnetonka's Lacey Martin ranks among the state leaders in goals with 10 in four games.

The season-opening win over Edina slates the Huskies as the top team in Class 2A, having rattled off a pair of wins since the triumph over the Hornets. Minnesota verbal commit Peyton Hemp and Minnesota State commit Jamie Nelson lead the Huskies with seven total points each through three games.

Technically, Edina was ranked far-ahead of the Skippers in the preseason ratings, but the strength of the schedule the Skippers have blasted through powers Minnetonka to No. 2. The Skippers have outscored their opponents 32-4 over four games, en route to their 4-0 record, including wins over two teams that advanced to their respective section championship games and last year’s Class 1A state runner-up Warroad.

The Hornets dropped their first game 1-0 to top-ranked Andover but rebounded with a 7-0 win over Cretin-Derham Hall. The three-time defending Class 2A state champions have as much talent as any team in the state and will move up and down the top-five all season.

The Rangers snuck past Section 7 rival Elk River/Zimmerman 4-2 in their first game of the season. Ally Goehner is in mid-season form for the Rangers, stopping 24 of 26 shots and a penalty shot in the win. Troubling for both teams in the game was the number of penalties, with the Rangers giving the Elks seven tries with a player-advantage and the Elks handing the Rangers eight power-plays. Forest Lake converted on three of their eight power-play attempts.

After hovering near the top-10 in the preseason, the Eagles have rocketed out of the games with wins over perennial top-10 teams in Brainerd/Little Falls and Hill-Murray. The team’s tie came in game one of the season, drawing 3-3 with Maple Grove.

Blake’s hot start to the year came to a sobering halt on Saturday as Brainerd/Little Falls thumped the Bears 5-1 to snap a three-game winning streak. The Warriors tallied three goals on five shots in the third period to pull away from the Bears.

After suffering a 4-3 overtime loss to No. 5 Eden Prairie, the Warriors bounced back with a 5-1 win over Blake, cementing the team’s place among the state’s best. Gabbie Smith has been the most productive player so far, recording five goals and six points in three games.

A one-goal loss to No. 6 Blake is the only blemish on the Trojans’ record, with two wins before the loss and one after with a 4-2 win over Chaska-Chanhassen on Saturday. The first period has been the Achilles heel for the Trojan thus far, being outscored 6-2 but the opposition in the opening frame.

A single loss wouldn’t usually drop a team with North Wright County’s talent this far, but a loss by five goals does so in this case. The Riverhawks pulled off an overtime win in game one against unranked Anoka/Spring Lake Park before falling 6-1 to Maple Grove on Saturday.

The Crimson started with a 3-3 tie with No. 5 Eden Prairie and then picked up wins over Elk River/Zimmerman and No. 9 North Wright County. Lauren Stenslie and Stella Retrum pace the Crimson in scoring with eight and seven points, respectively. 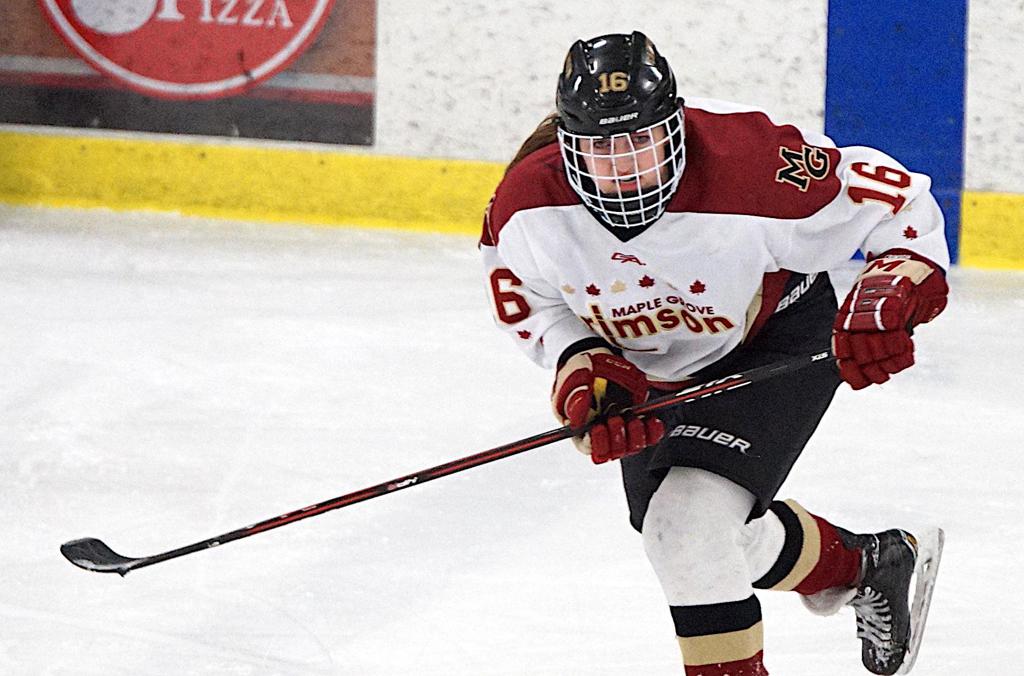 Allowing nine goals and moving up in the rankings? In Warroad’s case, yes. Below the surface stats, the Warriors outplayed Minnetonka in some areas, creating more scoring chances and taking more quality shots in Saturday’s 9-4 loss to the Skippers. The fact that Warroad’s lone loss came against highly-rated Minnetonka pushes the Warriors ahead of Breck, which fell to unranked, Class 2A foe Benilde-St. Margaret’s.

The Mustangs shook off a 6-3 loss to Benilde-St. Margaret’s with two wins over Duluth Marshall and Proctor-Hermantown. Olivia Mobley and Ava Lindsay, committed to Quinnipiac and Minnesota, respectively, are the Mustangs’ leading scorers. Mobley has eight goals and 13 points, while Lindsay has posted two goals and 10 points.

While the Eagles haven’t faced Murders’ Row to start the season, but the Eagles have beaten who they’ve needed to beat, and done so in convincing fashion. The Eagles are averaging 7.25 goals-per-game this season, thanks in large part to the play of Sarah Dravis and Emma Schmitz. Dravis is tied for the state-lead with 10 goals, while Schmitz has five goals and nine points on the season.

Tuesday’s matchup against South St. Paul will be crucial for the Whitehawks, as the Packers represent a quality Class 1A team Mound Westonka could prove their mettle. A 6-3 loss to Northfield halted a three-game win streak for the Whitehawks.

Taking No. 2-1A Breck to overtime salvaged the first four games of the season for the Mirage, which has picked up just one win in four tries this season. Two of those losses have been by one goal, while the other loss has been by two. On the plus side, the Mirage’s power play has been clicking through four games, converting at a clip of 35.7%. 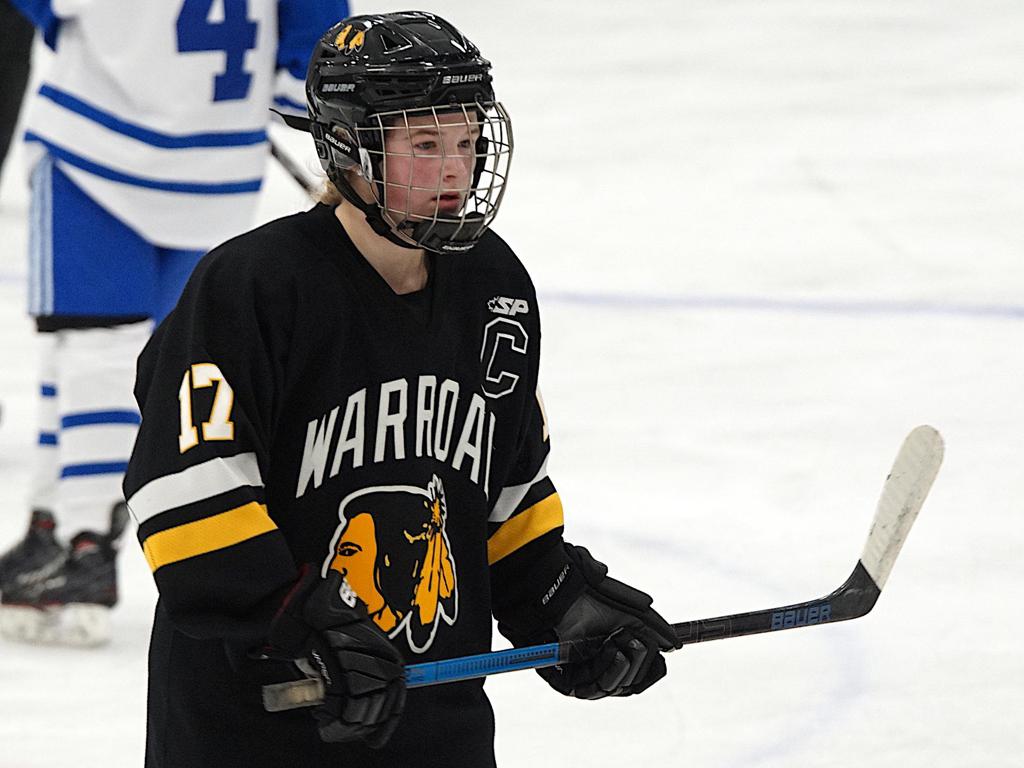 Geno Hendrickson, No. 1-A Warroad.