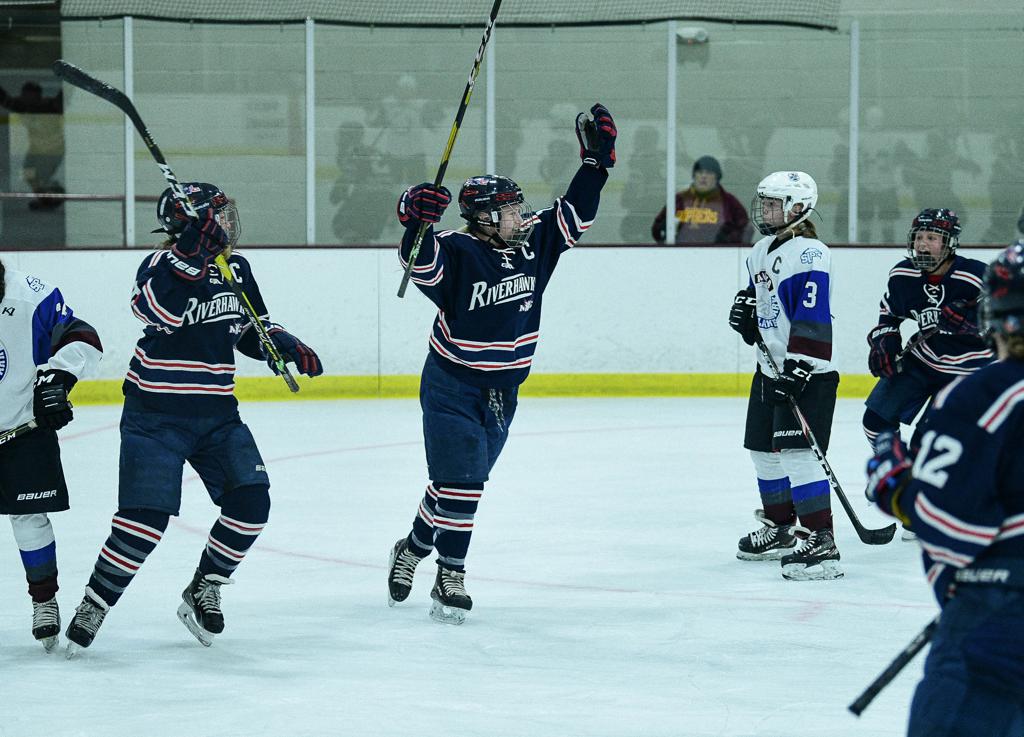 The Huskies remain at No. 1 this week for a good reason after handing the formerly second-ranked Minnetonka Skippers 3-1 on Saturday. Andover has not allowed more than three goals in a game this season, and the top line of Peyton Hemp, Jamie Nelson, and Gabby Krause has combined for 35 total points in five games.

Ally Goehner continued her shutout run in the Rangers’ most recent game, a signature 3-0 win over No. 8-2A Brainerd/Little Falls. Goehner has played every minute so far for Forest Lake, stopping 75 of 77 shots faced in four games.

A loss doesn’t drop the Skippers very far, especially since it came against top-ranked Andover and only by two goals. The Skippers have four crucial games coming up, facing Brainerd/Little Falls, Benilde-St. Margaret’s, Edina, and North Wright County consecutively.

The Bears tied Hill-Murray 2-2 and defeated No. 6 Eden Prairie 3-2 over the weekend to leapfrog Section 6-2A foe Edina thanks to the strength of their weekend opponents. Senior forward and Cornell commit Lily Delianedis is making an early case for the title of Ms. Hockey frontrunner, tied for fourth in the state with 17 total points against a quality schedule.

Since the season-opening loss to Andover, the Hornets have not allowed, albeit blanking the likes of Cretin-Derham Hall, Duluth, and Proctor-Hermantown, who have a combined 5-11 record. The Hornets have two more matchups at Braemar Ice Arena to conclude a seven-game stretch without being the visitor before taking to the “road” against Lake Conference rival Minnetonka on Dec. 7.

The Eagles suffered their first loss of the season in a defeat at the hands of No. 4-2A Blake, surrendering a 2-1 lead in the third period for a final score of 3-2 in favor of the Bears. On a positive note, the Eagles’ power-play unit has converted on 6 of 19 chances for a sparkling 31.6 conversion percentage.

Farmington was the latest victim for the undefeated Crimson, as Maple Grove rolled to a 4-1 win over a Tigers team with a record that does not reflect its level of talent. Junior goaltender Brooke Cassibo has been excellent for the Crimson in her first year as the starter, going 5-0-1 with a goals-against-average of 1.14 and a .952 save percentage.

The 3-0 loss to No. 2-2A Forest Lake hurts, but the Warriors’ strength of schedule keeps them in the top-10. The defending Class 2A state runner-up must improve on the power play if they want to make the journey to St. Paul in late February, as the Warriors have converted on just one of 26 chances with the player-advantage.

The Trojans crumpled in the third period against Benilde-St. Margaret’s, allowing three goals before escaping 5-4 in overtime on Gretchen Branton’s fourth goal of the game. Branton has nine goals through five games for the Trojans, good for fifth in the state.

Beating Moorhead 8-1 doesn’t heal all wounds from the Riverhawks’ 6-1 loss to Maple Grove earlier in the season, but it certainly helps. The Riverhawks’ schedule in early December will provide a more accurate lens to view the team with, with matchups against Roseau, Eden Prairie, and Minnetonka on the docket. 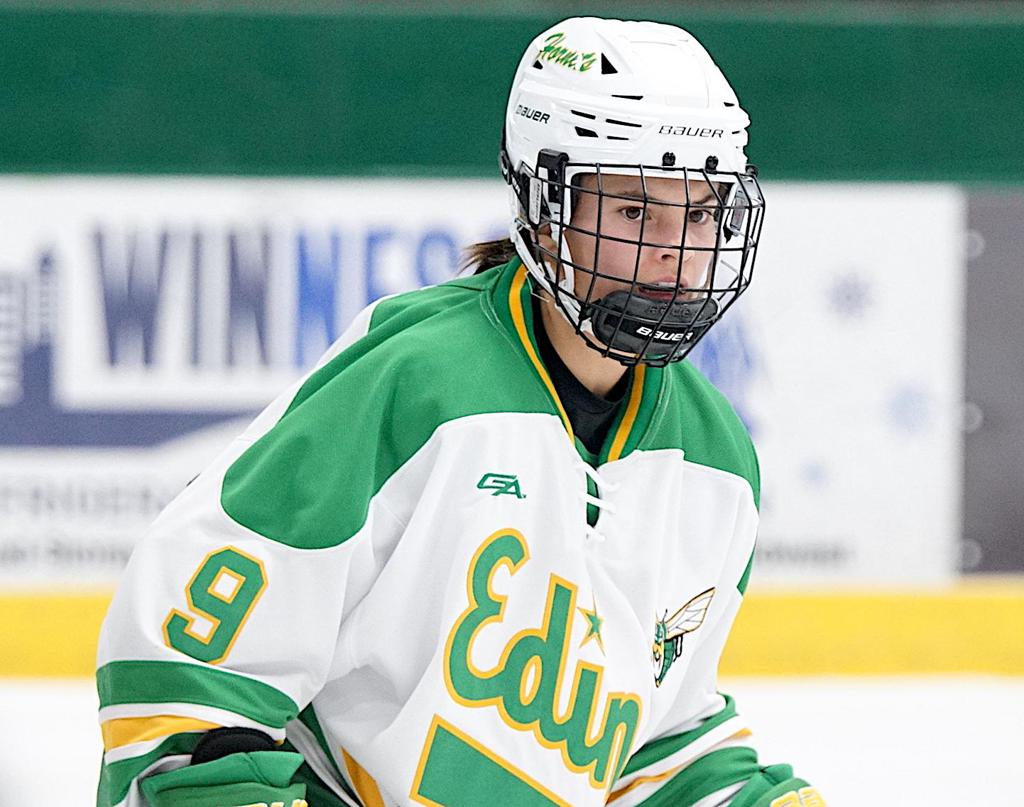 Edina's Katie Davis leads the No. 5 Hornets with seven total points this season.

So much for a letdown.

The Mustangs have rattled off four straight wins since losing to Benilde-St. Margaret’s, including triumphs over Hill-Murray and No. 5-1 Rochester Lourdes. Forward Olivia Mobley is currently tied for second in the state in scoring with 13 goals and 19 total points.

While the Warriors are coming off a 3-3 tie with unranked Chaska-Chanhassen, the premier Class 1A program of the northland outshot the Stormhawks 49-15 and dominated play before allowing two goals in the third period to lose a 3-1 lead. The Warriors face Bemidji on the road before beginning a seven-game homestand that will last until Dec. 17.

The fact that a loss after a loss bodes well for a team rankings-wise should tell you all you need to know about the difficulty of slotting teams for Class 1A. The Eagles fell to unranked Mahtomedi 4-2 but followed the loss with a 6-5 loss to top-ranked Breck, showing well with the return of leading scorer Sarah Dravis after being without her for the loss to the Zephyrs.

The week’s best Class 1A matchup was postponed, so now the Whitehawks will face South St. Paul in the final game of the regular season. In the meantime, Mound Westonka edged Holy Angels 3-1 in its only game since the last batch of rankings. The Whitehawks have allowed zero goals in the third period this season. 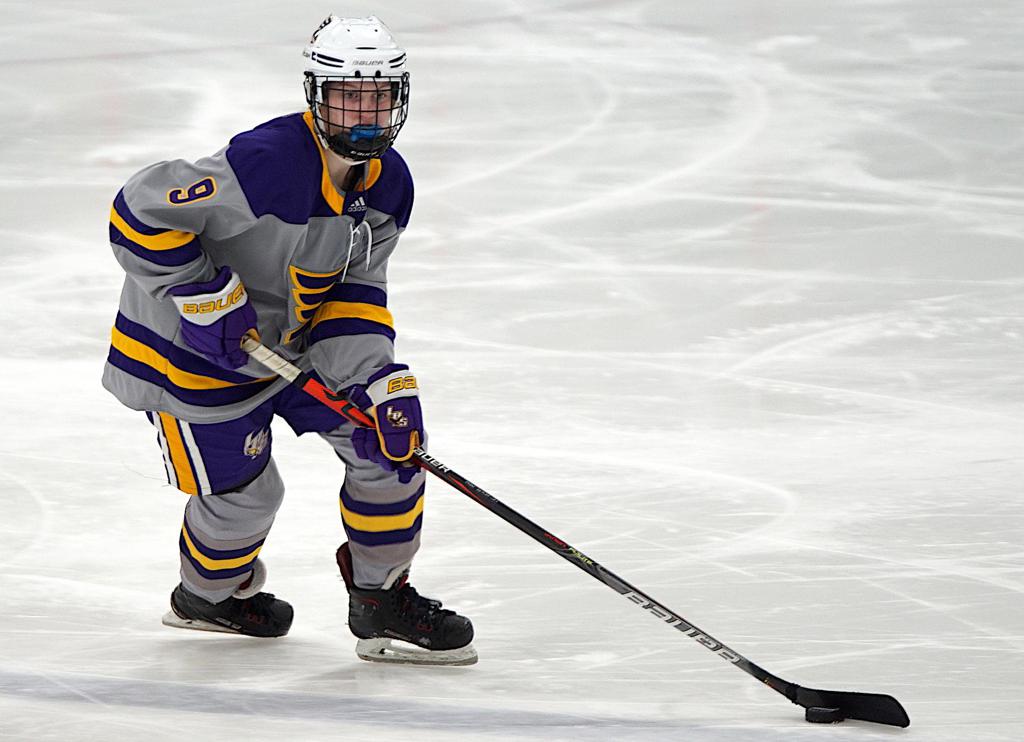 Sawyer Fleming and the Rochester Lourdes Eagles come into this week's Class 1A rankings at No. 3.