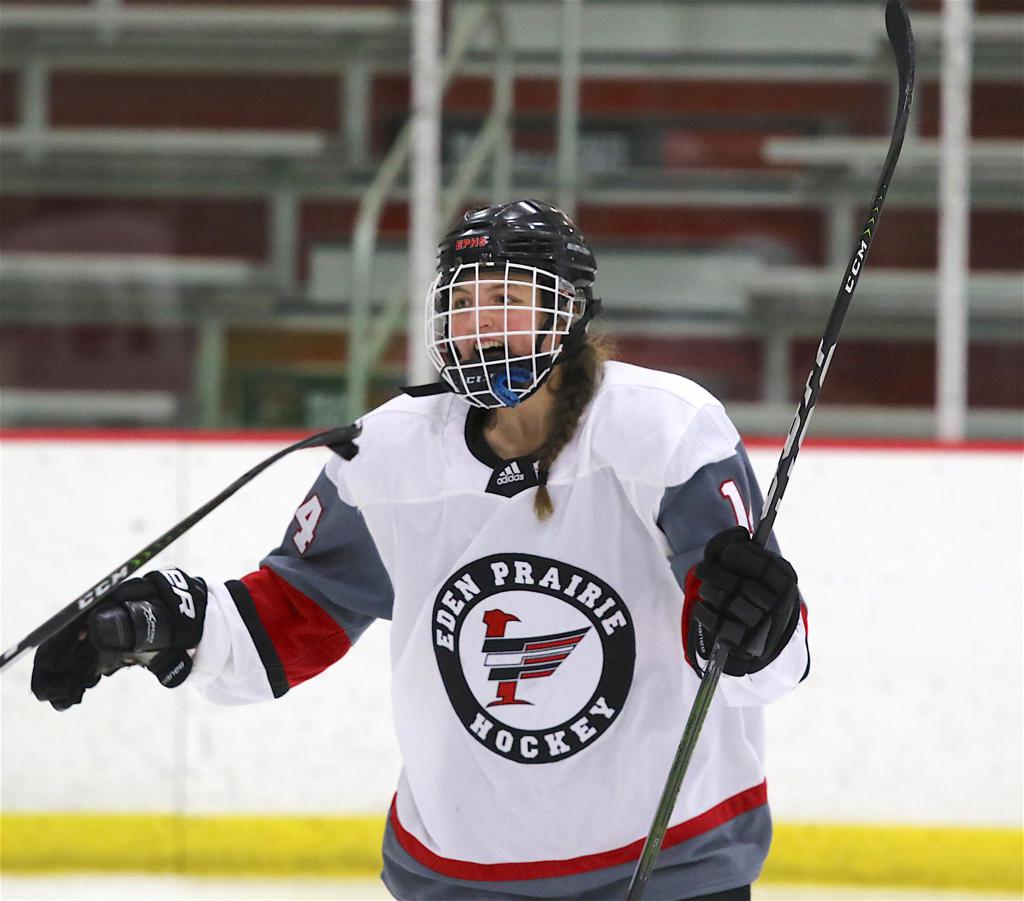 Eden Prairie sits at #5 this week in Class AA

With previously top-ranked Andover falling to Breck on Saturday, Edina takes over at the top spot. The Hornets won all four of their games over the holiday stretch, sweeping the Walser Invitational with quality wins over Stillwater, Maple Grove, and Breck.

The fourth win came against Blake on Saturday night. Offensive dynamo Katie Davis back from winning a gold medal with Team USA at the Under-18 Women’s World Championships, so Edina has all its weapons back in its arsenal.

With just the one loss on its resume, Andover only drops a single slot, considering that the loss in question came against the top-ranked team in Class 1A in Breck. The Huskies did take home the top prize in the Gold Division of the Herb Brooks Holiday Classic, winning all three games and scoring five times in each contest. Like Edina’s Davis, Andover’s Peyton Hemp has returned from Bratislava.

The Skippers skated in five games since the last batch of rankings, going 4-0-1 in that span with four consecutive wins and then a tie on Saturday against Lake Conference foe Wayzata. That run is more impressive when you consider the fact that both Maggie Nicholson and Rory Guilday were playing for Team USA since Christmas, returning in time for only last night’s contest.

Each game seems to be a race to four for the Skippers, as the team has scored four goals in seven of its last 10 victories.

Having Rachel Golnitz return from Team USA certainly helps, but time to rest and heal has paid dividends for the Forest Lake. The Rangers thumped Suburban East Conference rival Roseville in their first game since Dec. 21 by a score of 10-1 on Saturday, paced by Brooke Remington’s five assists.

Outside of a two-game swing to the Duluth area, the Rangers will play seven of their final eight games inside the Suburban East Conference.

The Eagles won four of five over the holidays to ease the painful memories of an 0-3 stretch in mid-December. Minnesota State commit Sydney Langseth has been on another level of the team’s past five games, recording seven goals and 16 points. Minnetonka spoiled the Eagles’ run through their home tournament, the Mid-Winter Meltdown, edging Eden Prairie 4-3 in the finals.

After a holiday split of 2-2, the Crimson finished fourth during the Walser Invitational and find themselves ranked sixth again. Both losses suffered by the Crimson were by scores of 2-1 to Edina and North Wright County, respectively, giving the Crimson and 2-4 record in its last six games.

The holidays were not kind to Blake, as the Bears dropped three games, including two to teams that were unranked at the time in Rogers and Holy Family Catholic. Fortunately for the Bears, Audrey Wethington has returned with a gold medal, and the season settles back into its usual rhythm post-holidays.

The Rams took three of four over the last two weeks, claiming third-place hardware at the Mid-Winter Meltdown with a win over Cretin-Derham Hall. Winners of six of their last seven games, the Rams do not travel south for the rest of the regular season. Kayla Santl has eclipsed the 40-point mark for the season with 22 goals and 18 assists.

After a 5-1 loss to No. 2-2A Andover to start the Herb Brooks Holiday Classic, Holy Family Catholic picked up the signature win(s) the program has been seeking. The Fire defeated Blake and Hill-Murray to capture the consolation title, and giving the team 10 wins in its last 11 games. Eight players have totaled 10 or more points this season for the fire.

It’s been a season of extremes for Hill-Murray, as the Pioneers have yet to score more than two goals in a loss and have won more than half of their games by scoring four or more goals. Over the holidays, the Pioneers dropped two contests, to Proctor-Hermantown and Holy Family Catholic, but remain in the top-10 for now. 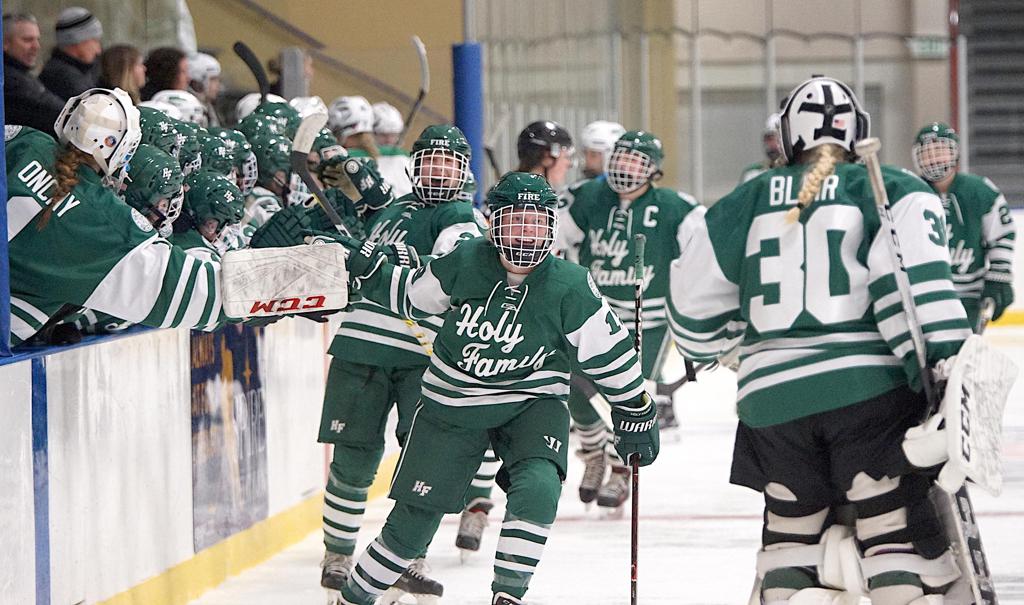 Holy Family Catholic earned a pair of wins over perennial powers Blake and Hill-Murray over the holiday stretch.

The Mustangs took down previous No. 1-2A Andover on Saturday, further cementing their place at the top of the Class 1A rankings.

The Warriors are 3-0 since the last rankings, outscoring their opponents 25-3 in that span. Proving to be one of the deepest teams in the state during the second half of the season, Warroad has 12 players with 10 or more points through 17 games.

Thanks to a win over No. 10-2A Hill-Murray, the Mirage make their way into the rankings for Class 1A. Proctor-Hermantown has won six of its last eight games and seems to have found its groove as we enter the final weeks of the regular season.

Since starting the season 1-2, the Lumberjacks have won 12 straight games and picked up a pair of victories in the last two weeks over Champlin Park/Coon Rapids and Hayward (WI). The trio of Taylor Nelson, Kiana Bender, and Dea DeLeon has been mentioned before but has to be again, having combined to score 66% of the team’s goals this year. 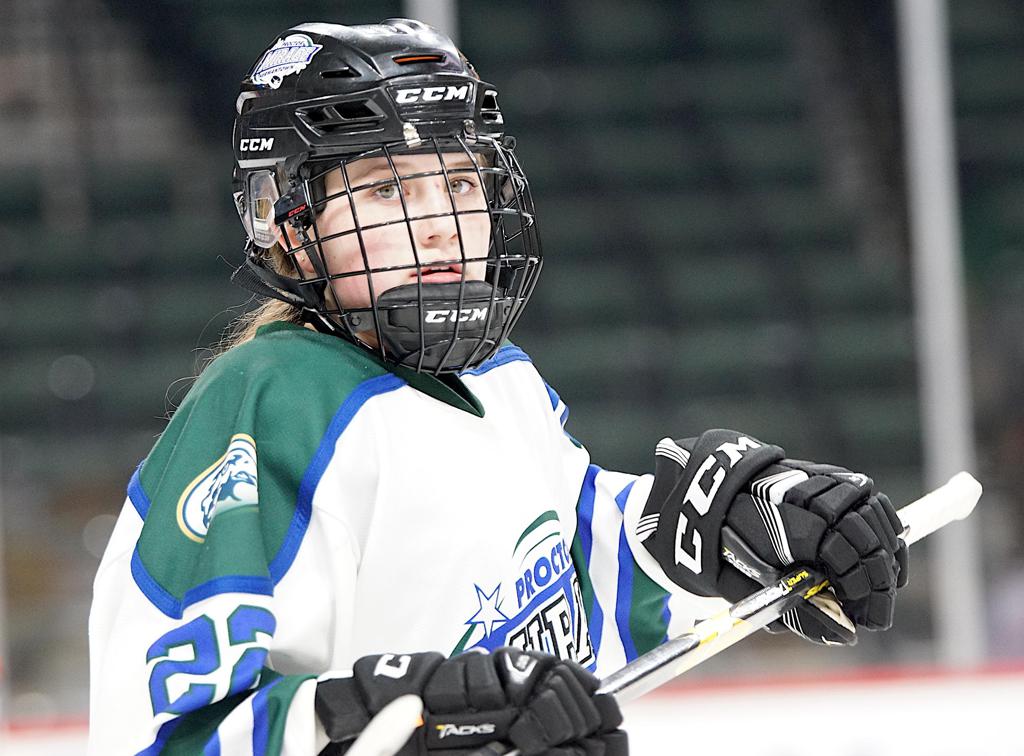