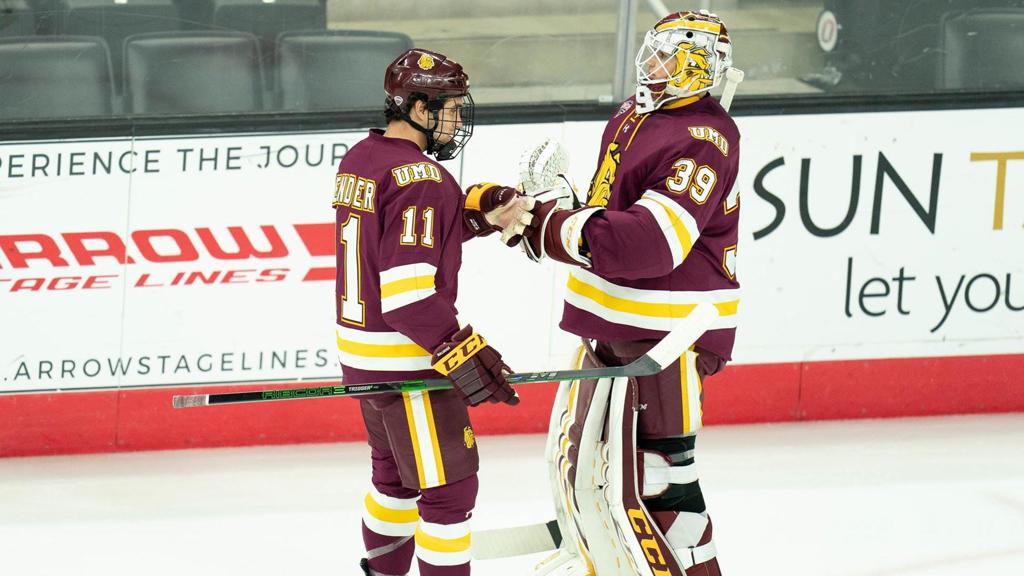 Minnesota Duluth kicked off NCHC pod play Tuesday night with a 5-3 win over Omaha, scoring four times in the third period, including twice on the power play, to pull away for the victory.

"Our power play did a pretty good job, but certainly improvements to be made," Minnesota Duluth Head Coach Scott Sandelin said after the game, also offering mild praise for his penalty-killing unit.

Omaha (0-1, 0-1) took a 2-1 lead into the third period thanks to a goal and assist from senior forward Martin Sundberg. After senior forward Koby Bender put Minnesota Duluth up 1-0 within the first two minutes of the opening period, Sundberg assisted sophomore forward Nolan Sullivan for an even-strength goal, then notched his own tally on a power play less than 10 minutes later.

Sophomore forward Jack Randl pulled Omaha within one with a goal late in the third, slamming home a puck batted toward him by Tyler Weiss. The Bulldogs, ranked No. 3 in the country in the USCHO preseason poll, took a penalty during Omaha's scoring possession, prompting the Mavericks to pull goaltender Isaiah Saville for a six-on-four advantage with 1:08 to play in regulation.

However, the extra attacker would prove futile as Bulldog defenseman Hunter Lellig launched a shot from Minnesota Duluth's end that found Omaha's twine, extending the Bulldog lead to 5-3, essentially ending the game.

"I thought they all did a good job," Sandelin said of his underclassmen, adding that he and his coaching staff expect some understandable growing pains along the way. "They're going to go through those experiences. They're going to make mistakes, and we've got to keep teaching and throwing them into those situations and letting them grow," Sandelin said.

In addition to Omaha's Sundberg, Minnesota Duluth's Koby Bender, Jackson Cates, and Nick Swaney all recorded a goal and an assist in the win. In his first action for the Bulldogs, sophomore goaltender Ryan Fanti stopped 26 of 29 shots, while Saville ended the game with 22 saves on 26 shots.

Fanti's performance may calm some nerves around the program, as Tuesday's game was the first in a long time without Hunter Shepard between the pipes.

"It's a good confidence-builder for him to come in and get a win," Sandelin said of Fanti. "I thought he played solidly and hopefully it's a good building block for him."