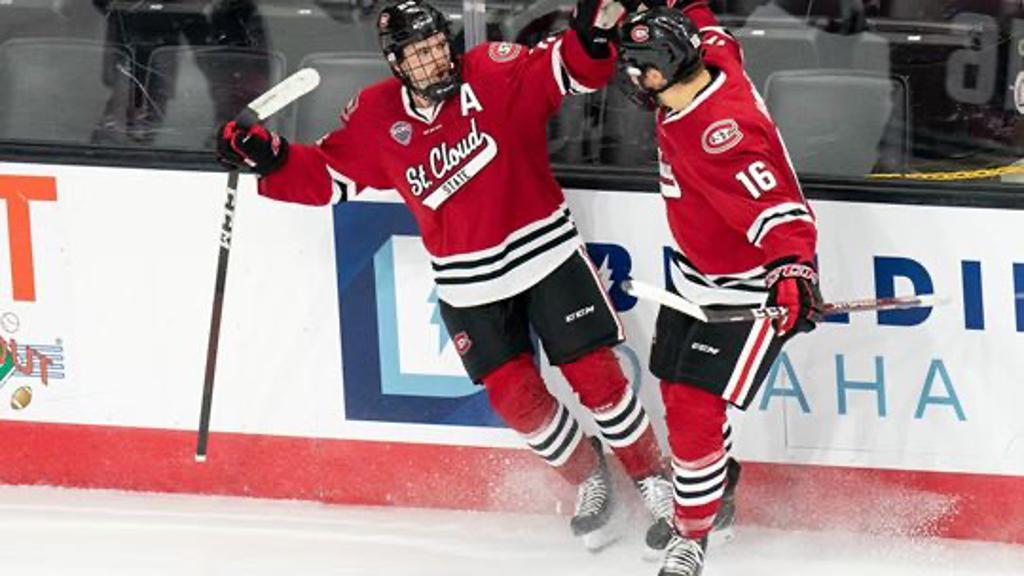 “I really liked Hammer’s line tonight,” Huskies Head Coach Brett Larson said on Midco TV’s postgame Home of Economy Coaches Corner. “I thought they did a lot to generate some offense for us.”

Huskies junior defenseman Nick Perbix earned credit for the game-winning goal, taking a shot that bounced high into the air before being accidentally knocked into the Western Michigan net by Bronco forward Josh Passolt.

Prior to Perbix’s game-winner, the junior forward Kupka tied the game for the Huskies (1-0, 1-0), scoring his first collegiate goal on an assist from junior defenseman Spencer Meier. Kupka’s goal helped tilt the ice in favor of the Huskies during the second half of the third period.

“That line just got better and better as the night went on,” Larson said of his (on paper) fourth unit. “I thought they really jelled well and created a lot of offense as they went along,” Larson continued. “We’re still looking for combinations early in the season, but I like that one.”

No. 17 Western Michigan (0-1, 0-1) had taken a 3-2 lead into the third period thanks to goals by sophomore defenseman Scooter Brickey and sophomore forward Jason Polin, and the Broncos seemed to hold an edge over St. Cloud State late in the second and early in the third.

Larson praised the play of his goaltender, senior David Hrenak, for maintaining his composure.

“They had a little push early in the third,” Larson said of the Broncos. “I thought they kept coming with a lot of pressure and put us on our heels early. David made some saves when we needed it.”

Hrenak finished the game with 21 saves for the Huskies.

Junior forward Micah Miller and senior forward Kevin Fitzgerald scored the first two goals of the game for the Huskies, both at even strength.

Western Michigan will face Omaha on Thursday at 7:35 PM, while St. Cloud State’s next contest will be against No. 4 Denver on Saturday at 8:05 PM.