The Iron Seven Take Over Cleveland

Six skaters and one goalie from Minnesota took on some of the best girls high school players in the country - and nearly won it all. 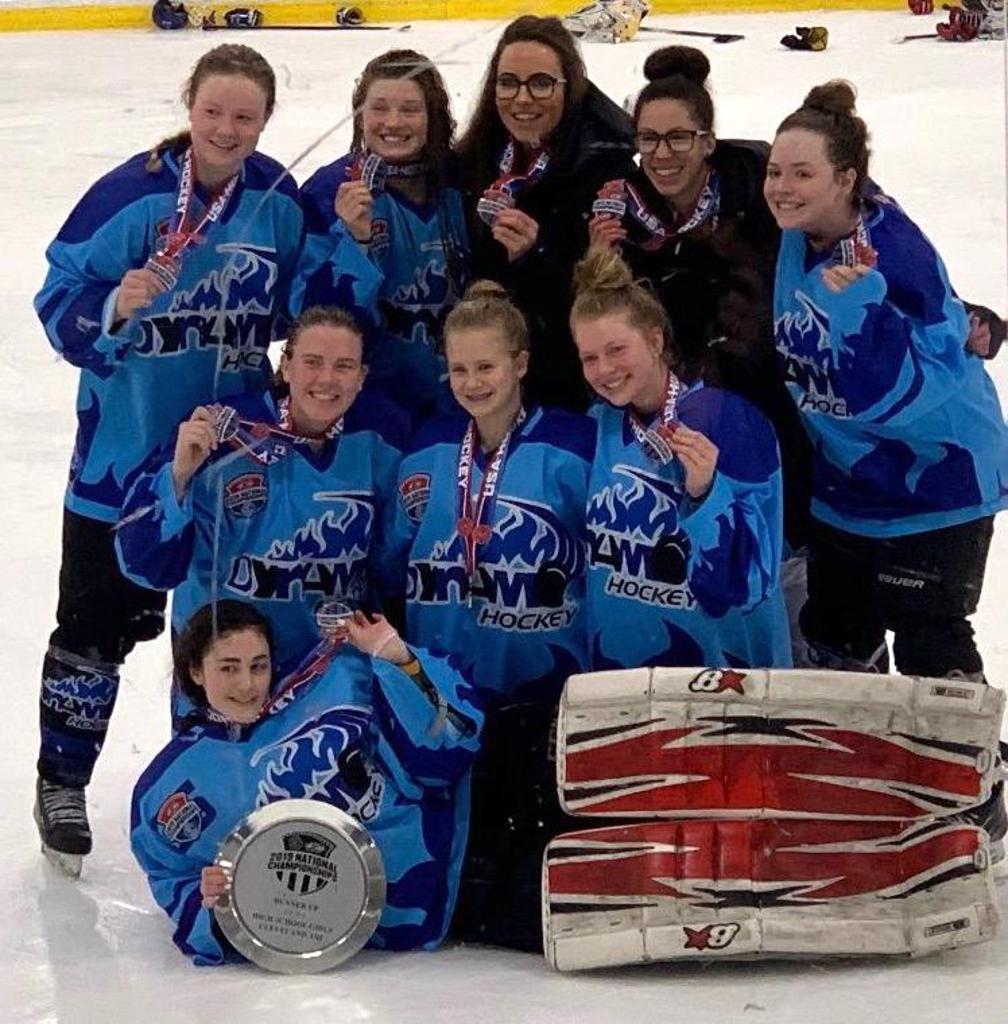 Minnesota Dynamo Black poses with its silver trophy after going 4-1 at the national tournament. Photo courtesy of MN Dynamo Black.

Miller sat uncomfortably at Gate E12, waiting for or a flight bound for Cleveland, twiddling a dry-erase marker in her fingers and sharing muted conversation with assistant coach Kara Cole.

“I travel with my whiteboard, so we were sitting at the gate just drawing stuff up,” Miller said over the phone on Tuesday afternoon, now slightly more than two days removed from a marathon hockey weekend in the city with a flammable river.

There were no grandiose plans of complicated offensive schemes for Miller’s second trip to the USA Hockey Girls High School National Championships on that Wednesday morning. There was no talk of how the goaltender rotation would shake out, our how to stagger the defensive pairs for special teams situations.

“It’s almost like we did a volleyball rotation, so you’re working around that, and then I explained to the players about the defensive zone as a basketball (example),” Miller said. “Playing a zone defense like you would in a basketball game.”

Position rotations? Passive defensive play even without someone in the penalty box? These concepts did little to ease Miller’s anxiety.

“I didn’t fell settled down until the second that puck dropped in our first game on Thursday,” Miller admitted. “Because then I knew (that) we’re here, we’ve got the team we have, everybody’s jerseys showed up. That atmosphere was a little bit stressful, but it was worth it.”

With Miller’s worries alleviated, her attention turned to the ice, where her five skaters and a single goaltender began what would turn out to be a five-game odyssey.

Read that again. Five skaters with one alternate, and one netminder. For a national tournament.

An unfortunate combination of spring breaks and class trips handicapped the Minnesota representatives in Cleveland, with approximately 11 skaters and a second goaltender being unable to make the trip.

“We knew right away this was the situation we were going to be in,” Miller said, outlining the summer tryout and fall game schedule that Minnesota Dynamo Black follows, and how it meshes with the schedule release for the national tournaments and the already-set spring breaks for respective schools.

“It was definitely something that taught me more about hockey than what I (previously) knew,” defender Lauren Rokala said, adding that her trip to Cleveland included playing as much forward and it did defense. “Going into it and having my coaches tell me that I’m going to be playing forward, I was kind of nervous and had no idea what to expect from myself.” 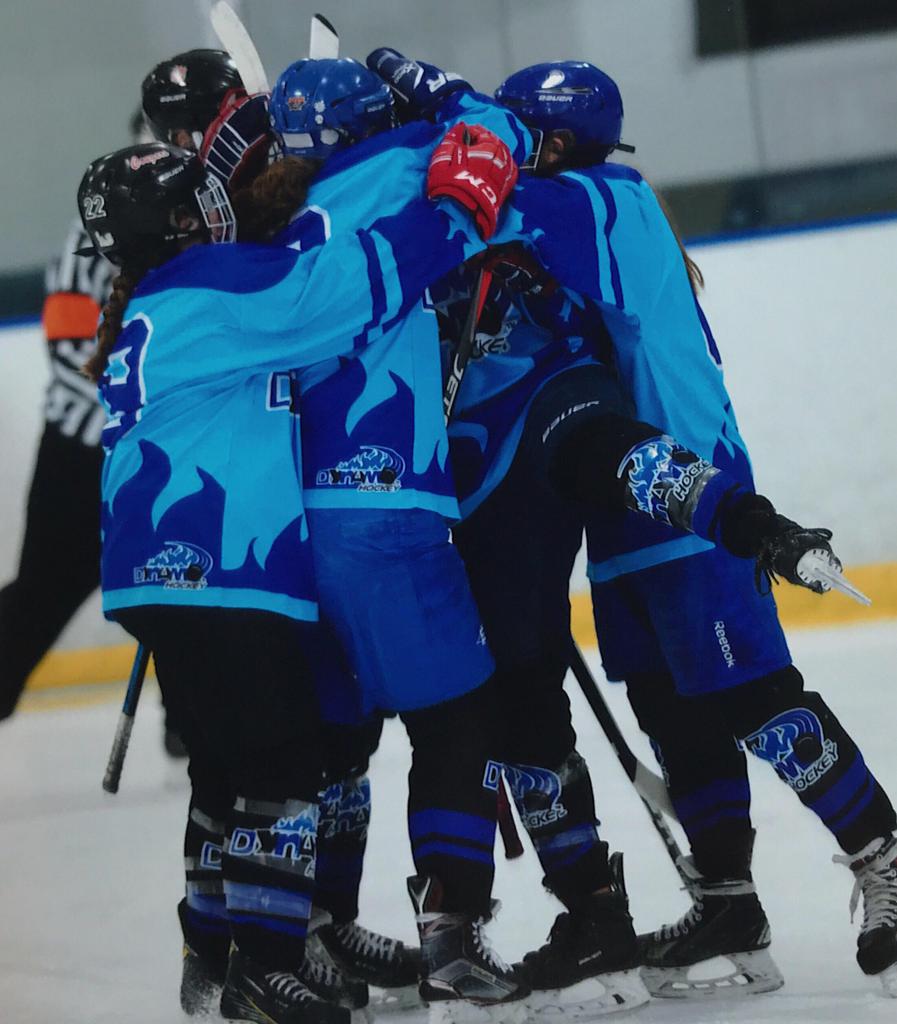 That sentiment of unknown expectations wasn’t exclusive to Rokala, but the group of players and parents that made the trip damned the torpedoes and went full speed ahead with their skeleton crew, which quickly became the darling of the national tournament and earned the nickname “The Iron Seven.”

“Everybody was on our side,” Miller said. “It was a really fun atmosphere for the players because people were coming to watch them play (as opposed) to just watching a hockey game.”

Those curious supporters who wanted to see the team that actually showed up with six skaters and a goalie were treated to a display of pure guts, as the Minnesota girls won their first four games, downing teams from Anchorage (twice), Colorado, Montana, and Texas.

“Knowing that yeah, we’re gonna have six (skaters) we’re obviously going to be at a disadvantage here, but we’re all Minnesota girls, and we can all do something,” Rokala said. The senior who skated for North Wright County during the high school season recorded six points during the five games in Cleveland and will continue her playing career at Nichols College in Massachusetts next year.

Centennial senior Mackenna Stoterau played every minute of the weekend for Minnesota Dynamo Black, and her competitive nature did not allow her to heed a coach’s plea for a less active style of play.

“Mackenna Stoterau is definitely a kid that takes on any challenge,” Miller said. “She’s one of those kids who just doesn’t know how to turn it off, either,” Miller continued with a laugh. “She was coming out of her net; she was making (acrobatic) saves, she was passing the puck up the ice for our breakouts. She just didn’t miss a beat at all.”

Unlike some of her teammates, playing every minute of every game is nothing new for Stoterau.

“Growing up when I was in youth hockey, most of the time I was on the ‘B’ team, so I was usually the only goalie,” Stoterau said, adding that her frenetic energy between the pipes is for both her teammates’ and her own benefit.

“If I can help (the skaters) stay a little bit calmer, or help them by getting pucks and setting up plays, I feel like that directly effects how many shots I will be getting or seeing. I see (my play) as an investment.” 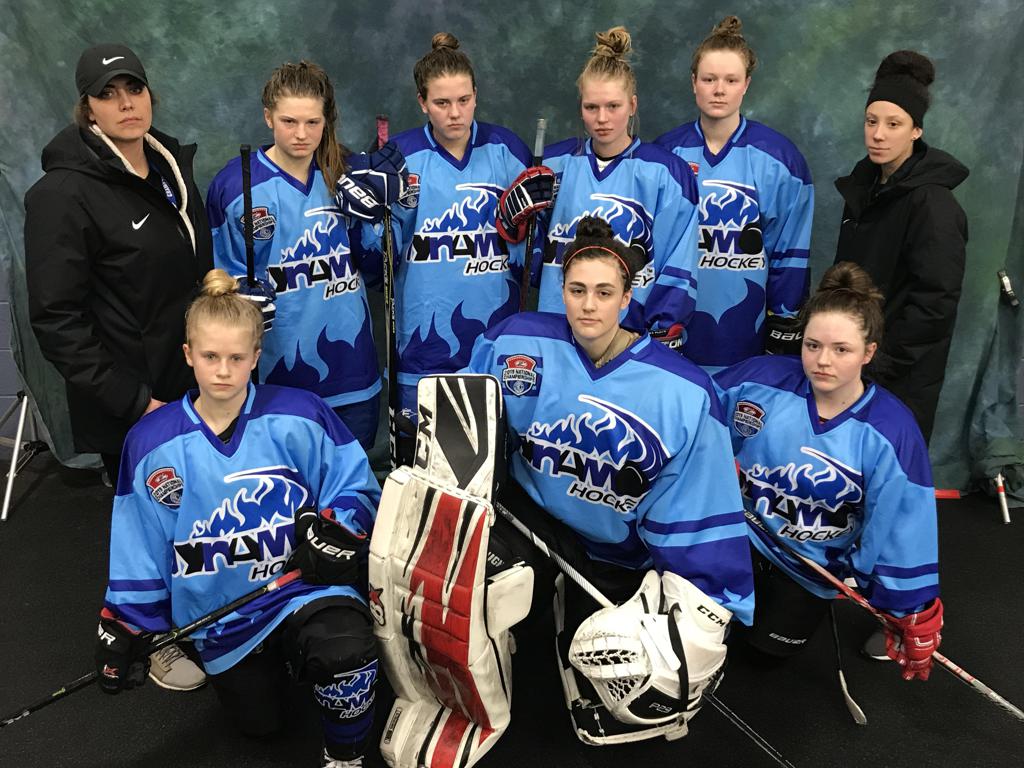 With a 4-0 record, Minnesota advanced to the national finals for a chance to repeat as champions before running into the buzzsaw Team Texas and its half-dozen players committed to Division I programs. The Minnesotans had edged Team Texas 3-2 on Saturday morning but eventually ran out of gas in their fifth game of the weekend against a team that featured as many Division I commits as Minnesota had on its entire bench.

The score was 3-0 in the first five minutes of the game, as Team Texas eased to a 10-0 victory and the national crown. But nobody wants a Team Texas sweater.

There wasn’t a member of the tournament staff, any of the athletic trainers or a single rink employee who wasn’t rooting for Minnesota, Miller said, and someone went so far as to ask for a team jersey. The teams representing Alaska and Montana joined the chorus of support, packing the bleachers for the final game and cheering for Minnesota.

“There was a time in our defensive zone, and we had a face-off, and there were three other teams in the stands watching us, and it was so cool to see them,” Rokala said. “After the game, the Anchorage girls lined our hallway and gave us a tunnel going back to our locker room.”

“It was pretty amazing to see those other girls give us the encouragement that we needed,” Stoterau added. “Everybody kind of knew that we were just trying to play our hearts out.”

Regardless of the final score, Minnesota came out on top, Rokala said.

“We won that game. That’s what we were all saying,” Rokala said conclusively.

“With all the (fan support) and all the effort we put into it, there’s no way any other team could have done this.”