The Panthers scored four straight goals to erase a 2-0 deficit to beat Holy Family Catholic, while the Bears held on for a 3-2 win over St. Thomas Academy. 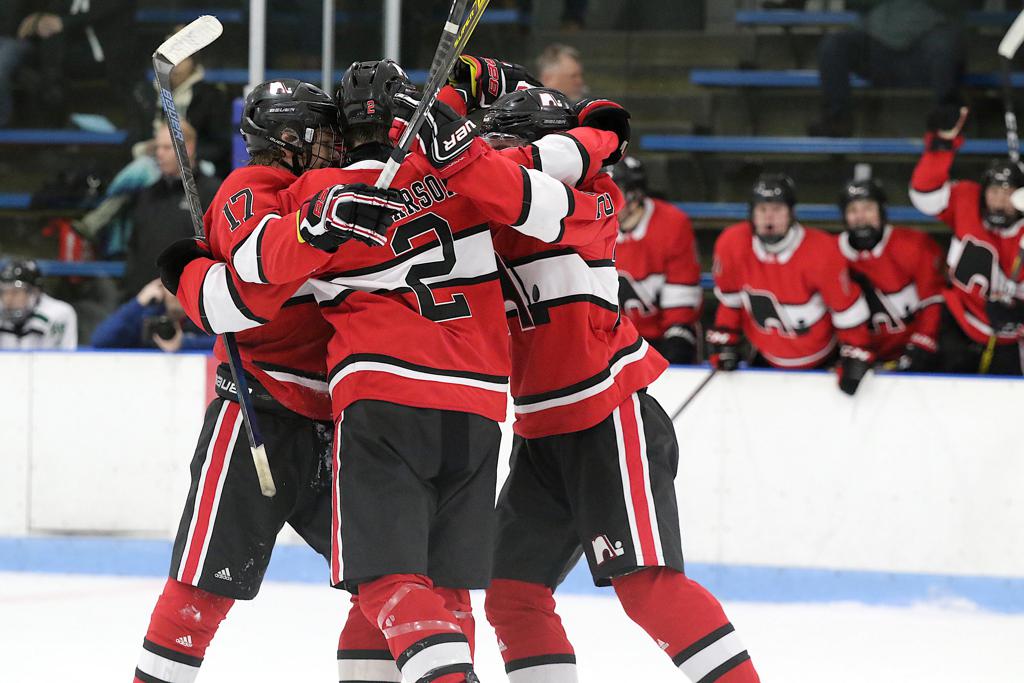 Two-thirds of Saturday’s game may have infuriated the Lakeville North coaching staff, but after a tongue-lashing from Jake Taylor, the Panthers escaped Holy Family Catholic with a 4-2 win on Saturday afternoon.

“I just told them (that) for what we’re trying to do with our hockey team, and what our identity is, to come out in those first two periods and have a horrible work ethic is unacceptable,” Taylor said.

“I said (that) the only way we honor what we did yesterday is we come out today with an even better effort, and obviously those first two periods were the opposite of what we were looking for.”

The slow start came on the heels of a solid 5-2 win over Chaska on Friday night, during which the Panthers did pretty much everything they didn’t in the first two periods on Saturday.

Nick Strand and Lucas Jorgenson each scored once for Holy Family Catholic in the first and second periods, giving the Fire (1-1) a 2-0 lead entering the third. Despite the edge, the Fire encountered a snarling Panther squad in the third, visibly motivated after Taylor’s challenge to live up to yesterday’s performance.

But Taylor can’t put on the pads and play, so he relies on upperclassmen like Ben Monson turn his admonitions into actions.

“He blocks shots. He’s physical. He logs a ton of ice and never complains,” Taylor said. “He’s a team-first kind of guy, and that’s why we lean on him.” 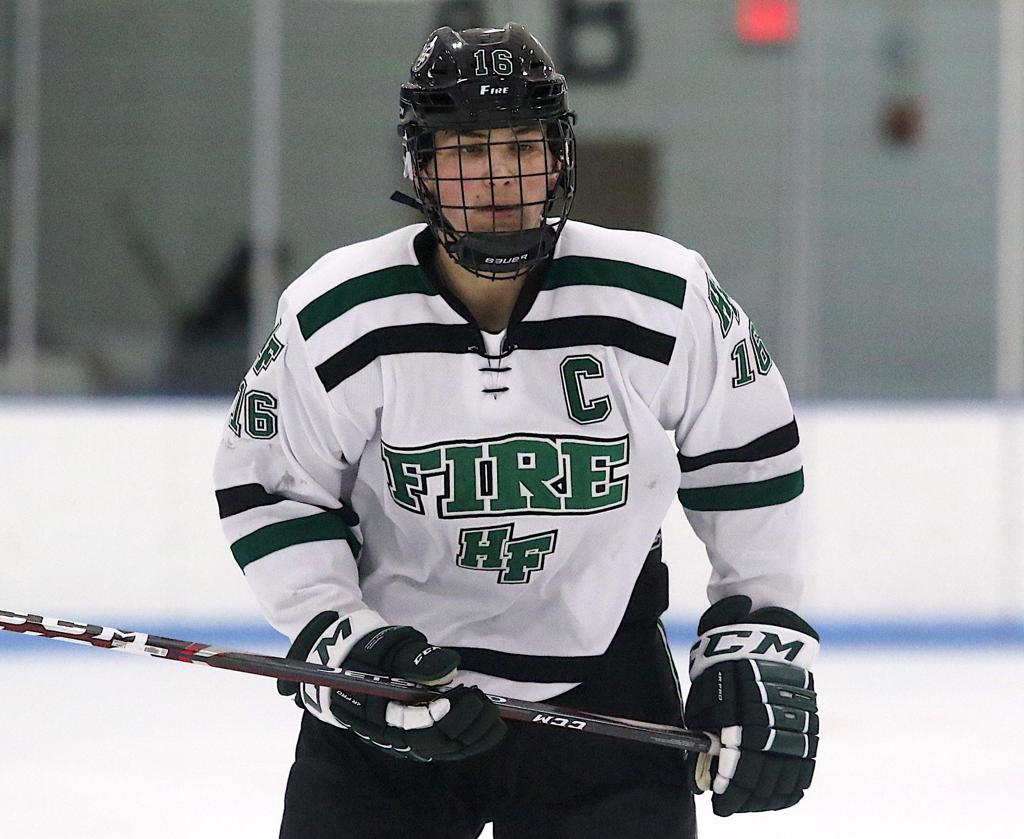 A varsity starter since his freshman season, Monson hit everything in sight during Saturday’s third period, and his intensity spilled over to his teammates.

Mario Gasparini and Keaton Kranz scored less than three minutes apart to tie the game for the Panthers, with Kranz burying a shot in the slot. With 4:31 to play in the game, Cole Pearson launched a shot from the point that eluded Holy Family Catholic’s Dylan Halliwil to put the Panthers up 3-2. Monson capped the comeback with an empty-net goal from his own end, an exclamation point on a four-point weekend for the junior.

“Just hard work, listening to the coaches,” Monson said of how he’s evolved as a player since starting next to current Bowling Green defenseman Garrett Daly on the Panther blue line. “Doing my job and not trying to do more than I (should) do.”

Monson comes from a long line of standout Lakeville North defenseman, with the program sending roughly half-a-dozen Division I defenders in the last five years. Taylor attributes the trend to the team’s commitment to basic defensive play.

“It’s probably a product of a little bit of luck for us as we so happen to have these guys coming through,” Taylor said. “But we pay a lot of attention to defensive-minded hockey and the fundamentals of being a good defenseman.” 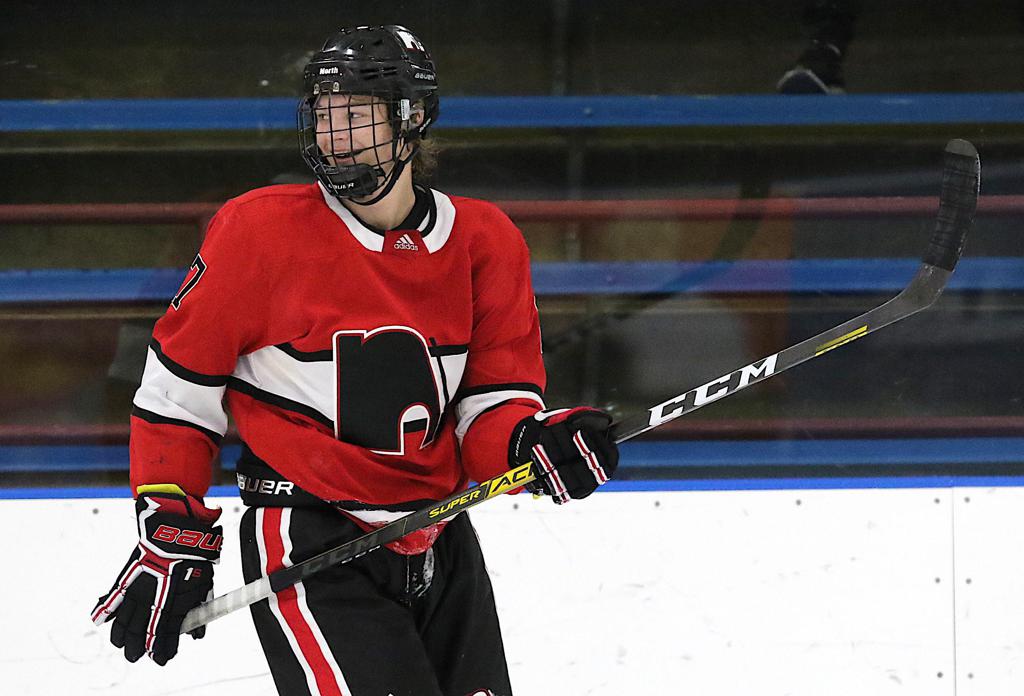 Lakeville North's Ben Monson cracks a smile after scoring an empty-net goal to cement the Panthers' win over the Fire.

As a handful of Blake hockey players milled about the area just outside locker rooms A and B at Bloomington Ice Garden, they warned that freshman Jonah Spaeth probably wouldn’t smile if he were interviewed.

He wasn’t talkative, they said. Taciturn. But after a few minutes, out trudged Spaeth, bag, and sticks in hand, fresh off his first varsity win, a pleased grin spread across his face.

Spaeth had gotten the call to start on Saturday night three hours before puck drop, filling in for Blake’s established starter Aksel Reid, who had come down with an illness.

“Since I’m normally the backup goalie, getting the chance to play and actually winning, it was a great time,” Spaeth said.

Spaeth stopped 26 of 28 shots in a whale of a game, helping the Bears hold off a late St. Thomas Academy charge to emerge victorious by a score of 3-2.

“It’s fun to see that,” Blake interim Head Coach Rob McClanahan said of Spaeth’s performance. “The guys played hard for him, but Jonah made the saves he had to make tonight,” McClanahan continued. “It gives us a lot of confidence going forward.” 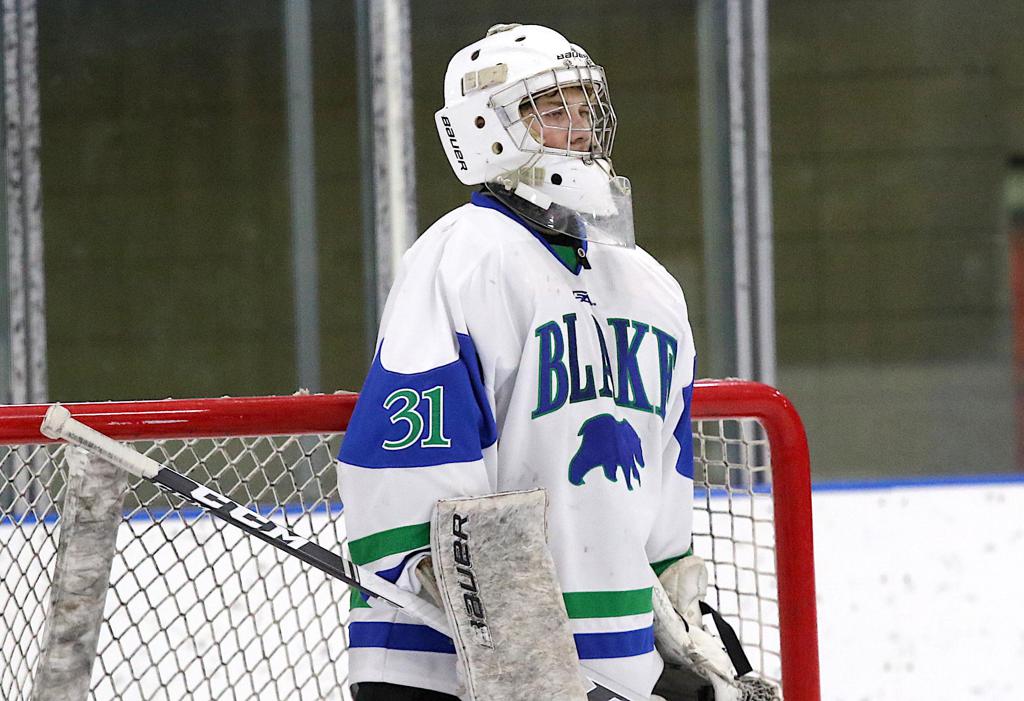 Jonah Spaeth stopped 26 of 28 shots to earn the win in relief for Blake on Saturday night.

In a near repeat of Friday night’s comeback win, the Cadets (1-2) dug themselves a deficit, surrendering goals to Joe Miller in the first and Jack Sabre in the second before Riley O’Brien scored to make it 2-1 entering the third period.

Gavin Best extended the Blake lead to 3-1 with 2:04 remaining, but the Cardiac Catholics pulled within one on a Jackson Hallum goal with 1:24 to play in regulation.

As he had been all game, Spaeth was up to the task in rejecting the Cadet attack for the last eighty-four seconds, turning away a few last-gasp chances to secure yet another close win for the Bears (3-1), ranked No. 8 in the latest YHH Class 2A ratings.

Blake has won its last three games since opening the season with a 6-3 loss to No. 3-2A Andover, beating the same Andover team, Chaska, and now St. Thomas Academy. All three wins have been by a margin of two goals or one goal.

“We haven’t had the blowout yet,” McClanahan said wistfully, adding that he’d love to see his team burn out the scoreboard some time. “We’re still working towards that.” 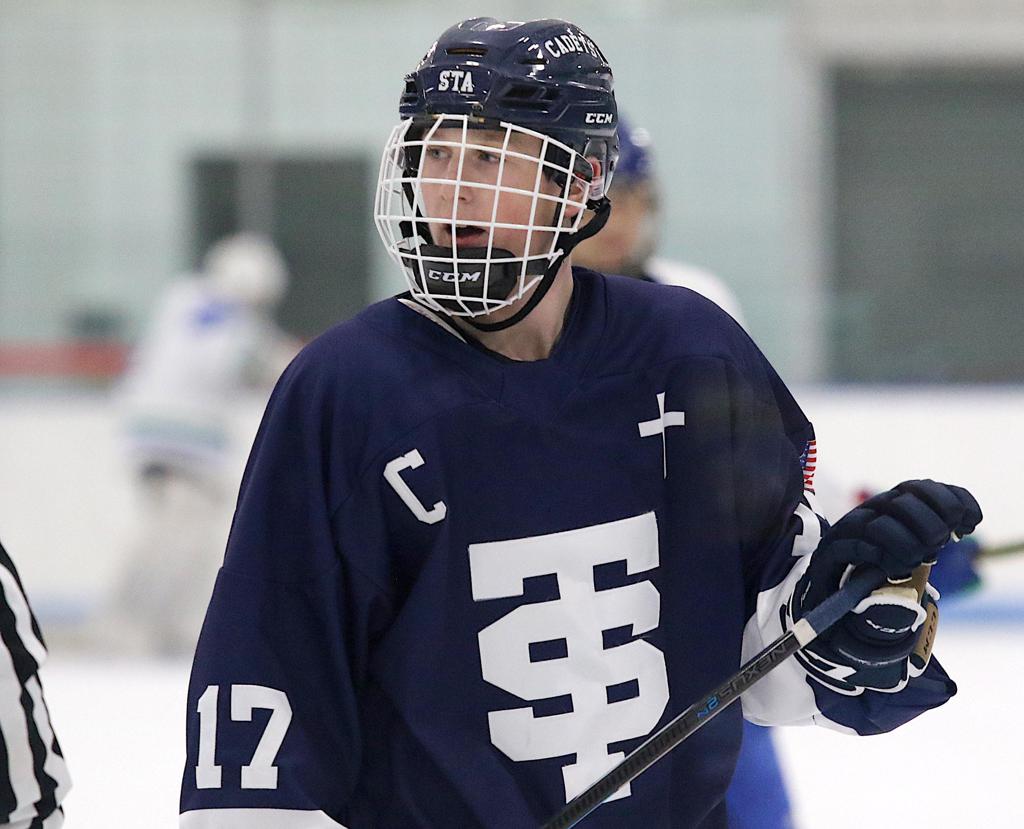