The Cougars downed the Eagles 5-2 in a Northwest Suburban Conference matchup with Class 2A, Section 5 implications. 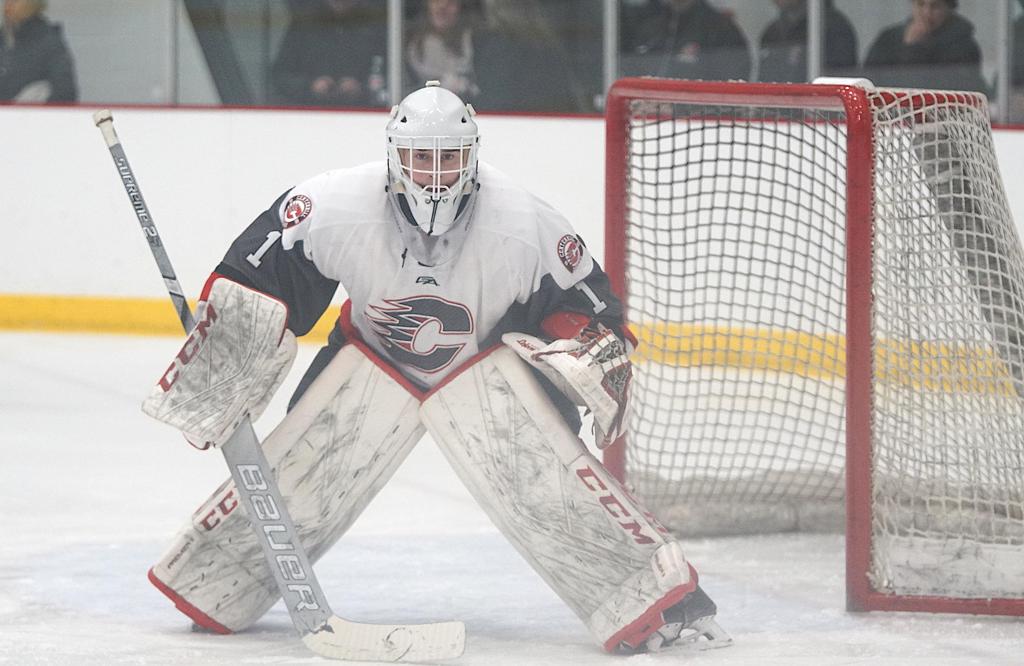 Centennial goaltender Leo Troje stopped 29 of 31 shots to hold off a late charge by Totino-Grace and secure a 5-2 win for Centennial.

So what goes through the Centennial sophomore’s mind when he corrals a puck and sees nothing but ice in front of him?

“Skate as fast as I can,” Carls said after his Cougars dispatched Northwest Suburban Conference and Class 2A, Section 5 rival Totino-Grace 5-2 on Thursday night. “Make sure I’m free,” Carls continued. “Once I get free, look for a spot to shoot.”

Shooting is something Carls has done a lot of this season for Centennial (12-11, 7-4), and his method has been successful to the tune of 18 goals this season after notching a goal and assist in the Cougars’ win over the Eagles.

“We often talk about how good he’s going to be in two years,” Centennial coach Ritch Menne said of Carls, referring to the fact that the Cougars’ leading scorer is only a sophomore.

One of the keys to Carls’s offensive prowess is his first three steps, which are among the quickest in the state. The burst Carls generates from a dead-stop is phenomenal.

“I think he’s just a great athlete,” Menne said. “He’ll do a backflip in the locker room after wins.”

“One summer, one of my friend’s buddies could do it, and I said ‘That looks cool,’” Carls said with a chuckle of his dabbling in prop-less gymnastics, adding that one of the secrets to his lower-body strength is a focus on low-weight, high-rep squats twice per week. 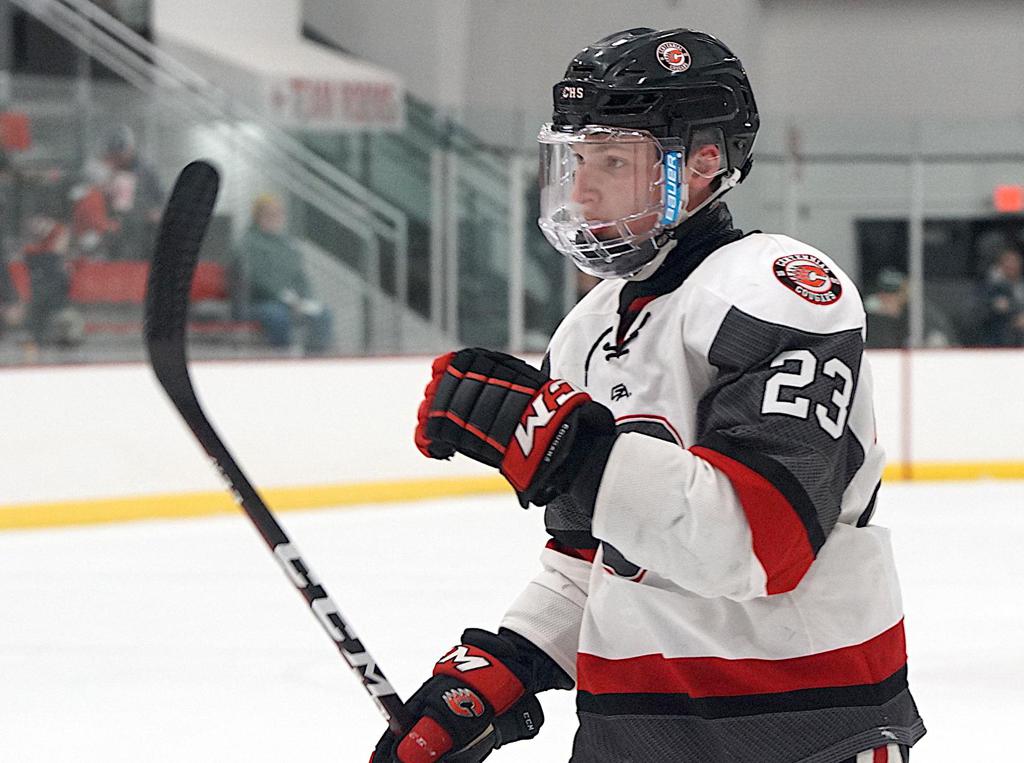 A.J. Carls scored a goal and added an assist in Centennial's 5-2 win over Totino-Grace on Thursday night.

The Cougars would need all of Carls’s flexibility and more in the win over the Eagles (7-14-1, 5-4-1) after surrendering a 4-0 lead and allowing Totino-Grace to score twice in the third period to make the score 4-2 with time for more.

“We took some stupid penalties,” Menne said. “They have a terrific power play. We just can’t give them that many opportunities.”

After taking advantage of some fortuitous bounces off the glass as the recently renovated Centennial Ice Arena, including a goal that Totino-Grace goaltender Wes Johnson knocked in inadvertently, the Cougars took a 4-0 lead into the third period. The Eagles got power-play tallies goals from Luke Delzer and Austin Burnevik to close the gap to two midway through the final frame.

Fortunately for the hosts, Sam Munson scored on a clean wrist-shot for the final score of 5-2. In addition to Munson and Carls, Owen VanTassel, Mason Wistrcill, and Max Marshall notched goals for Centennial.

The win is the Cougars’ fourth in their last five games, while Totino-Grace is 1-6 in their previous seven contests. 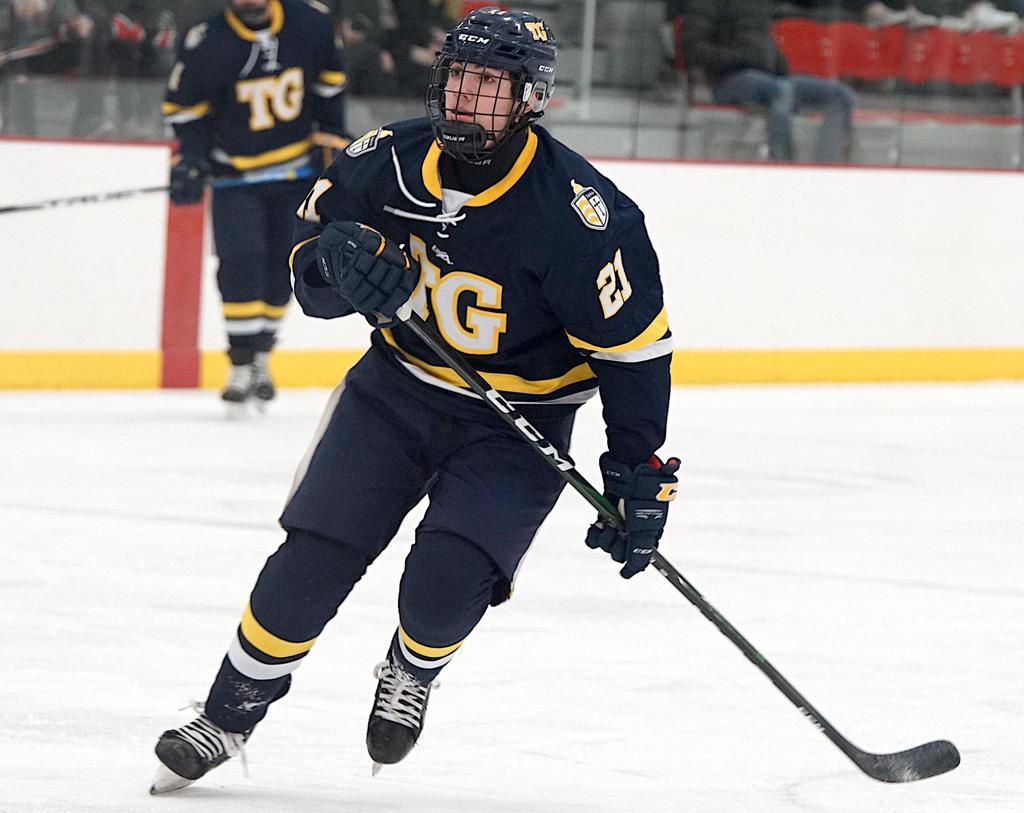 Austin Burnevik scored one of Totino-Grace's two goals in Thursday's loss to Centennial.