Breaking down how each Division I program based in Minnesota fared over college hockey's opening "weekend." 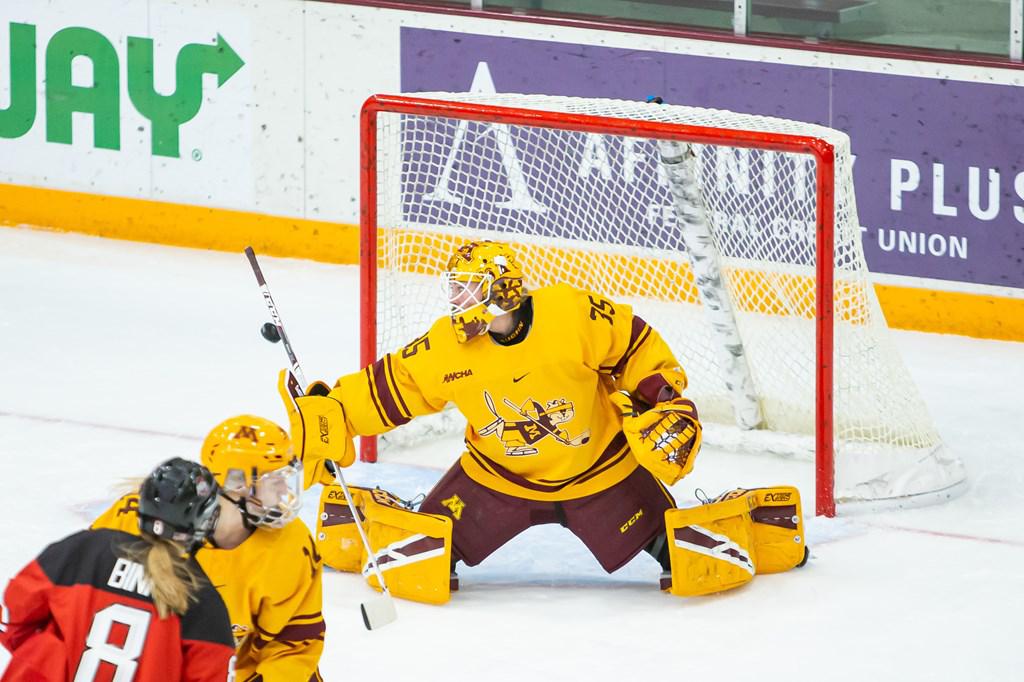 Minnesota goaltender Lauren Bench was outstanding during the weekend' split with Ohio State, earning a 36-save shutout in game one and stopping 69 of 71 shots over the two games. Kelly Jo Hagenson/University of Minnesota Athletics

Minnesota State, ranked No. 6 in the USCHO Men's Division I poll, opened the season with a 5-0 win over No. 19 Bemidji State, powered by two goals from Reggie Lutz and three helpers from Jake Jaremko, a throwback for fans who remember the duo lighting up the scoreboards as high school stars for Elk River. Andy Carroll, Jake Livingstone, and Julian Napravnik also scored in the win for the Mavericks (1-0), while 2020 All-American Dryden McKay made 21 saves to earn the shutout.

The second game of the two-game series between the teams, originally scheduled for Monday afternoon, has been postponed due to positive COVID-19 testing results from the Minnesota State side.

Minnesota has rattled off three wins to start the 2020-2021 campaign, sweeping Penn State with victories of 4-1 and 3-2 on Thursday and Friday before downing Ohio State on Monday night 4-1.

Golden Gophers Jonny Sorenson, Scott Reedy, Cullen Munson, and Sampo Ranta each scored once in the first win over the Nittany Lions, with PSU’s Kevin Wall scoring the lone goal of the loss. Minnesota's Matt Staudacher picked up two assists in the win.

Goals by Reedy, Sammy Walker, and Brannon McManus gave the No. 8 Golden Gophers (3-0) a 3-1 win over Penn State late in the third period of game two, but Wall’s second goal of the series pulled the Nittany Lions within one at 3-2. Minnesota goaltender Jack LaFontaine and the defense held firm and escaped with the win, with LaFontaine stopping 34 of 36 shots. Impressively, the Golden Gophers did not allow a power-play goal over the two contests, forcing the No. 15 Nittany Lions (0-3) to go 0-6 with the man-advantage.

Despite the quick turnaround, Minnesota picked up its third win in as many days against No. 10 Ohio State, as Brock Faber, Sammy Walker, Bryce Brodzinski, and Ben Meyers each scored once. Faber’s goal was the first of his collegiate career. In addition to helping ice the game with a shorthanded, empty-net goal, Meyers won 15 of 18 face-offs against his Buckeye counterparts. Gustaf Westlund scored the only goal for Ohio State (0-1). 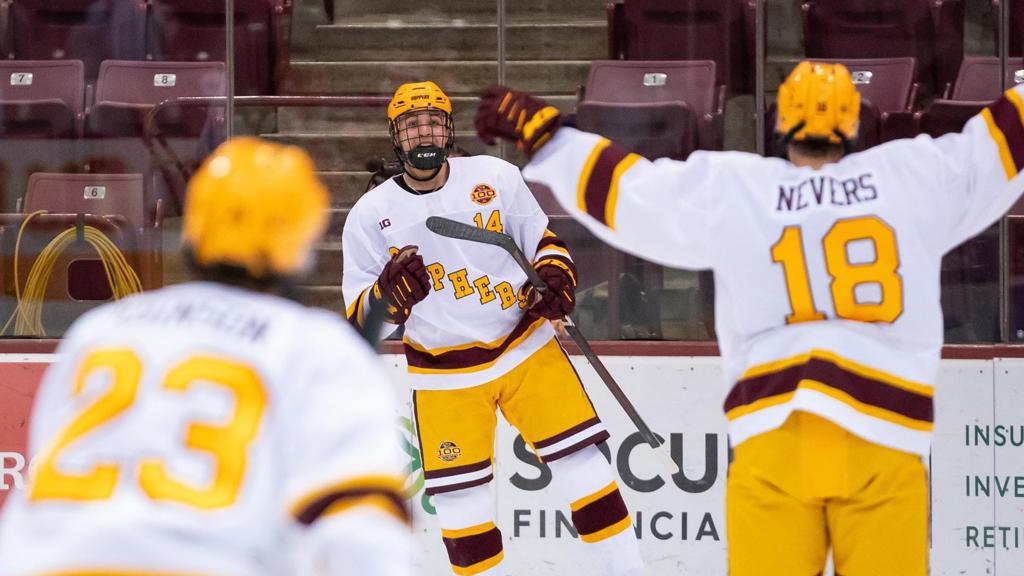 No. 6 Minnesota-Duluth lived up to its lofty slot with a convincing sweep of Minnesota State to open the 2020-2021 season.

The Bulldogs blanked the Mavericks 5-0 in game one, with five Bulldogs tallying goals. UMD's Ashton Bell kicked off her season with a goal and two assists to lead all skaters with three total points, and goaltender Emma Soderberg earned the shutout with 22 saves. Taylor Anderson, Naomi Rogge, and Anna Klein notched single goals for the Bulldogs (2-0), while Gabbie Hughes finished with two assists.

Minnesota State held a 3-2 lead in the second game midway through the second period, but Minnesota-Duluth swiped the momentum with a goal 14 seconds after the Mavericks took the lead and then scored the go-ahead goal late in the second frame. The Bulldogs would add three more scores in the third period for a 7-3 final. Kylie Hanley, Anna Klein, and Anneke Linser all scored twice in game two, with Linser adding a pair of assists.

Kelsey King, Kennedy Bobychuk, and Madson Oelkers scored once each in the Mavericks' loss (0-2), and Taylor Wemple assisted on two of the three goals. The Mavericks went 0-6 on the power play across the two games.

The University of Minnesota split with Big 10 rival No. 4 Ohio State to start the season, taking the first game 4-0 before falling just short in game two by a score of 2-1.

Grace Zumwinkle scored two goals and added an assist in the first game of the series, with both tallies assisted by Madeline Wethington. Josey Dunne and Taylor Wente scored one goal each, and Lauren Bench turned in a spectacular 36-save performance for the shutout.

All of game two's scoring occurred in the first period, with Zumwinkle netting her third goal of the weekend to spot the third-ranked Golden Gophers (1-1) a 1-0 lead early, and advantage erased by Ohio State's Liz Schepers. Buckeye forward Tatum Skaggs scored what would end up being the game-winning goal with 9:19 to play in the opening period. Ohio State's Andrea Braendli made 25 saves to pick up the win, while the loss didn't dim the performance of Minnesota's Bench. Bench stopped 33 of 35 shots in the second game. 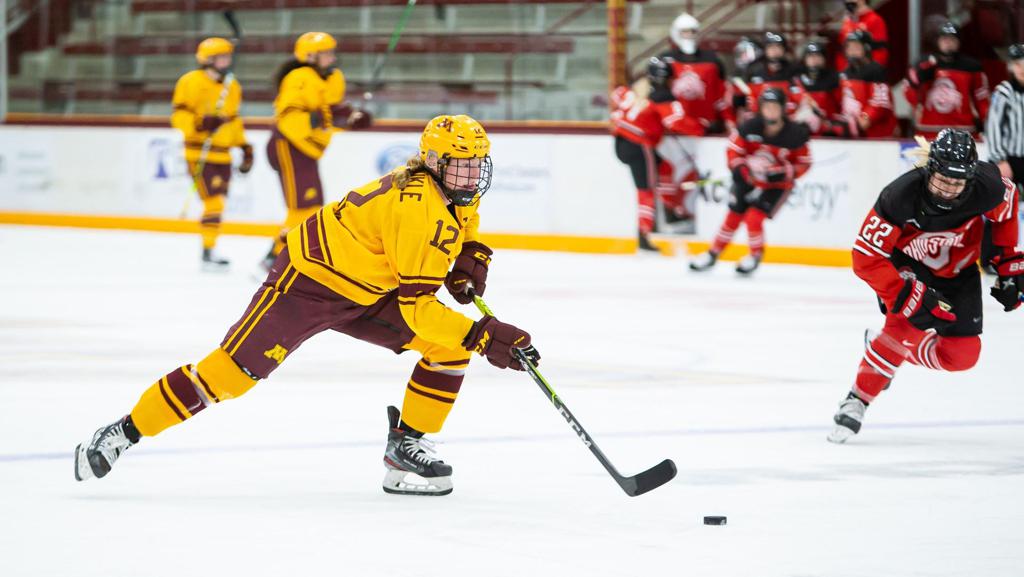