From a Stillwater native who skated for the Nashville Jr. Predators last season, to a goaltender from the tiny town of Sherburn, there's a lot to like about this year's crop of Minnesota invitees.

Each year, talented hockey players are invited to Plymouth, Michigan, a western suburb of Detroit that at last count had just over 9,000 residents. A portion of those residents includes the USA Hockey National Team Development Program players and staff, which fields two teams each season at the Under-17 and Under-18 levels.

Like the players invited to the tryout, scouts and player personnel staff from all levels of professional hockey pack the USA Hockey Arena on Plymouth's Beck Road, eager to see what the next crop of American talent has to offer.

This season, 11 Minnesota natives were invited to show their stuff in Michigan, with the state of hockey leading the way in total invitees, followed by New York with seven and Illinois and Massachusetts with five.

The players are split into two teams, Team Kane and Team Matthews. They will compete throughout the week in drills and scrimmages, in addition to physical strength and conditioning testing, with guidance provided by the USA Hockey NTDP staff. The camp will last from May 9-13, and all scrimmages will be broadcast on HockeyTV.com.

The NTDP has seen its brand rise over the past few seasons, thanks primarily to its success in the NHL Draft. Last year, six NTDP players were selected in the first two rounds of the draft, including Maple Grove product Brock Faber, who was picked by the Kings.

In 2019, the NTDP had a stunning eight players selected in the first round and saw 17 players taken by the conclusion of the draft. That year, NTDP product Jack Hughes went No. 1 overall to the New Jersey Devils. 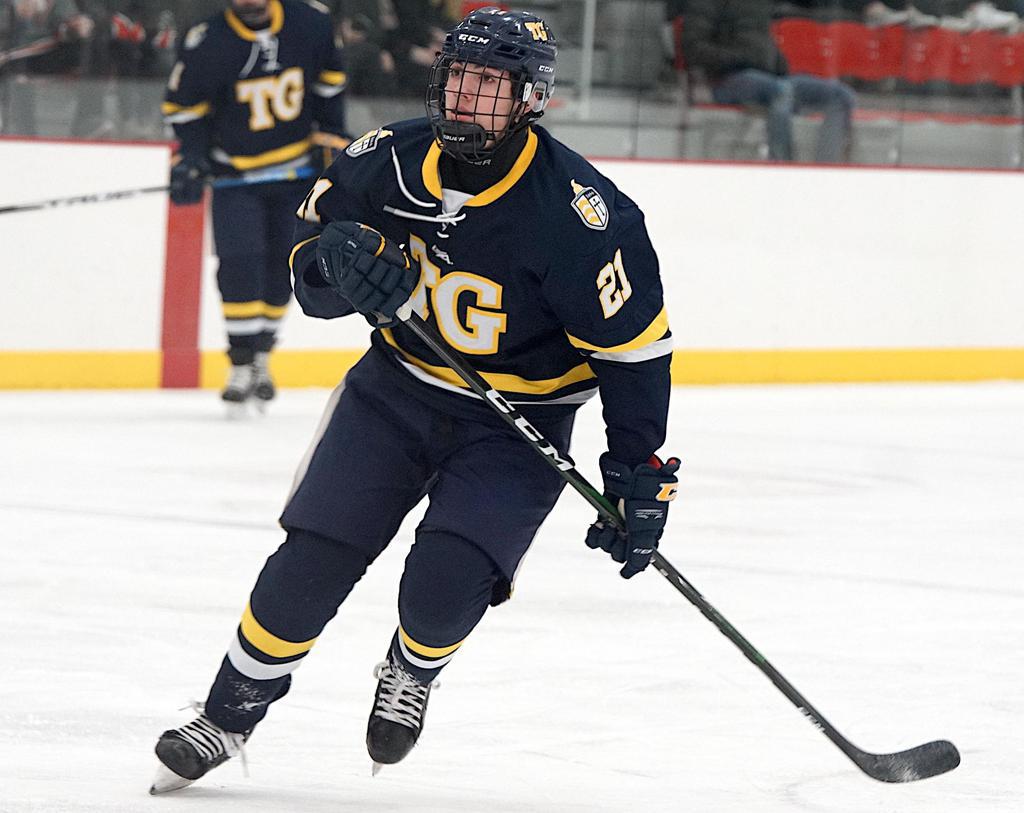 A general unknown to the Minnesota hockey community, Briere was born in Stillwater, but has bounced around the Tier I scene in Canada and the United States in recent years. Briere spent the 2019-2020 season with the Mississauga Senators, based in Ontario, and in 2020-2021 totaled 27 goals and 46 points in 62 games for the Nashville Jr. Predators.

Burnevik played his youth hockey for Blaine before moving on to Totino-Grace for high school. A skilled forward with a nose for the net and a knack for scoring goals, Burnevik led the Eagles in scoring as a sophomore last season with 19 goals and 41 points. He tallied 15 goals and 28 points as a freshman during the 2019-2020 season.

A product of Elk River, Davis recorded four goals and 12 points in his first season on the varsity on both the blue line and at forward for the Elks. In his last season of bantam hockey, Davis racked up 27 goals and 59 points in 49 games. Davis has typically played defense to this point in his career, but his soft hands and skill with the puck could pay dividends at forward. 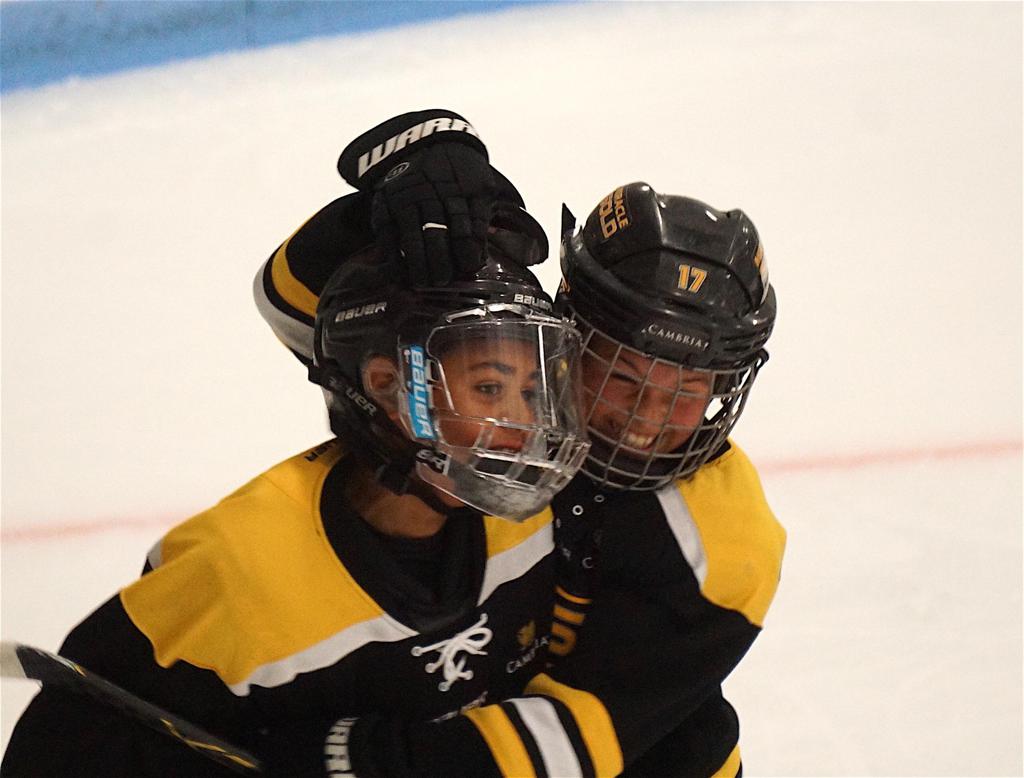 Carter Davis (left) spent the majority of his spring and summer hockey time with the Miracle Gold program.

The defensive lynchpin on the latest crop of Hermantown Hawks to storm through the youth ranks, Hanson has matured into a savvy and smooth-skating defenseman that can handle primary duties on both the penalty kill and power play. Hanson tallied nine goals and 29 points in his first season of high school hockey for the Hawks and has long been thought of as one of the top 2005-born defenders in the country.

The son of former Richfield High School star and longtime NHLer Darby Hendrickson, Beckett makes his way to Plymouth after suiting up for the Minnetonka varsity as a freshman. Hendrickson notched four goals and 15 points while helping the Skippers to the Class AA, Section 2 finals last season before falling to eventual state champion Eden Prairie in overtime.

Hendrickson led the Bantam Elite League in scoring and was named the league's Most Valuable Player in 2020 after totaling 17 goals and 33 points.

A second Totino-Grace Eagle to heed the call of the NTDP this year, Moore is a crafty forward with good hands, excellent ice vision, and executes well in tight spaces. A product of the Mounds View-Irondale youth program, Moore made the jump to high school hockey as a freshman during the 2019-2020 season, tallying seven goals and 36 points. Moore logged 17 goals and 38 points during his sophomore season for Torino-Grace. 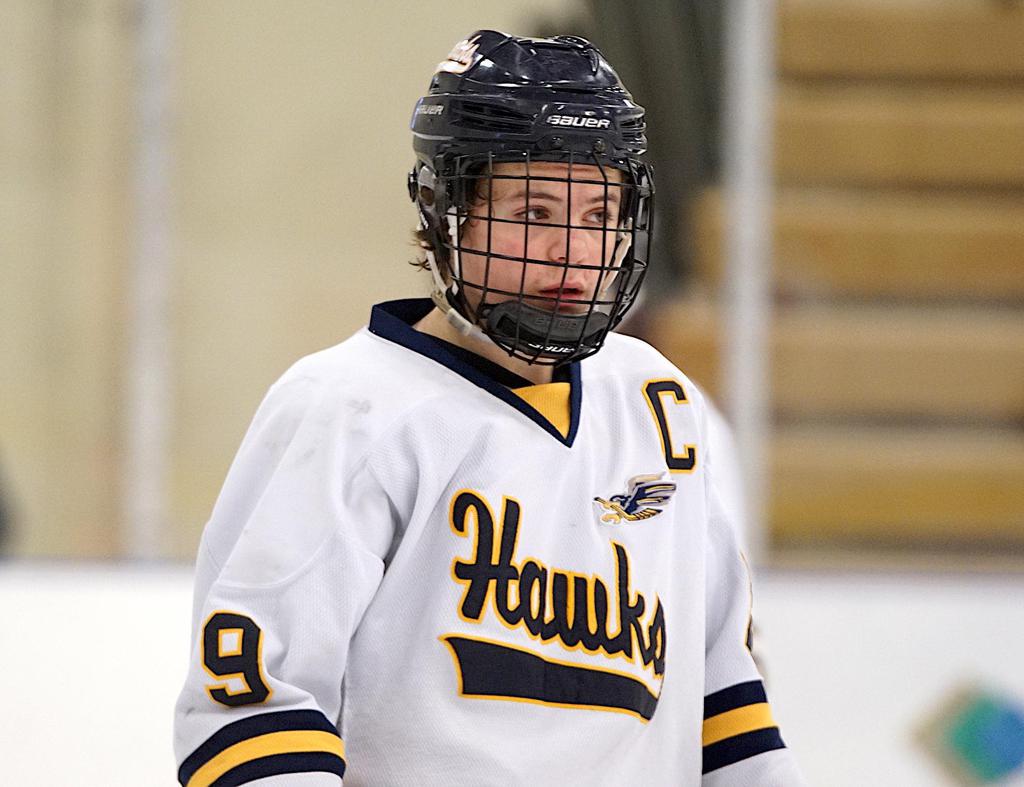 Musser joined the Victory Honda 15-Only Tier I team last season after finishing with a .901 save percentage with Fairmont High School in his lone season of high school hockey, earning that number while facing 1,046 shots in 21 games played in 2019-2020 with the Cardinals. In 2019, Musser led the Bantam Elite League Major Division with a save percentage of .910. One of six goaltenders invited to this year's tryout, Musser's competitiveness and technical ability in the crease should impress evaluators.

Reed is a mobile defender that can step up the physical play when needed and has adjusted well to various levels of play. A native of Dayton, Reed spent the bulk of his youth career with the Champlin Park program before joining the Sioux Falls Power for the last two seasons. Reed came back to Minnesota for high school, seeing action in 14 varsity games at Benilde-St. Margaret's, where he recorded four assists.

Reed's father, Jace, spent two seasons at the University of North Dakota and was a fifth-round draft pick of the New York Islanders in the 1989 NHL Entry Draft.

A Chaska Chanhassen Stormhawk by way of Grande Prairie, Alberta, Sawchyn has been "on the radar" since his days with the Onoway Eagles youth organization. Sawchyn skated for Team Alberta at the 2015 Brick Invitational, then had two productive outings with the West Coast Selects during World Selects Invitational tournaments in 2017 and 2018.

Sawchyn has spent the past two seasons at Shattuck-St. Mary's, totaling 46 goals and 143 points with the 14U and 16U teams. A well-rounded player, Sawchyn is relentless on the forecheck and devastating low in the offensive zone. 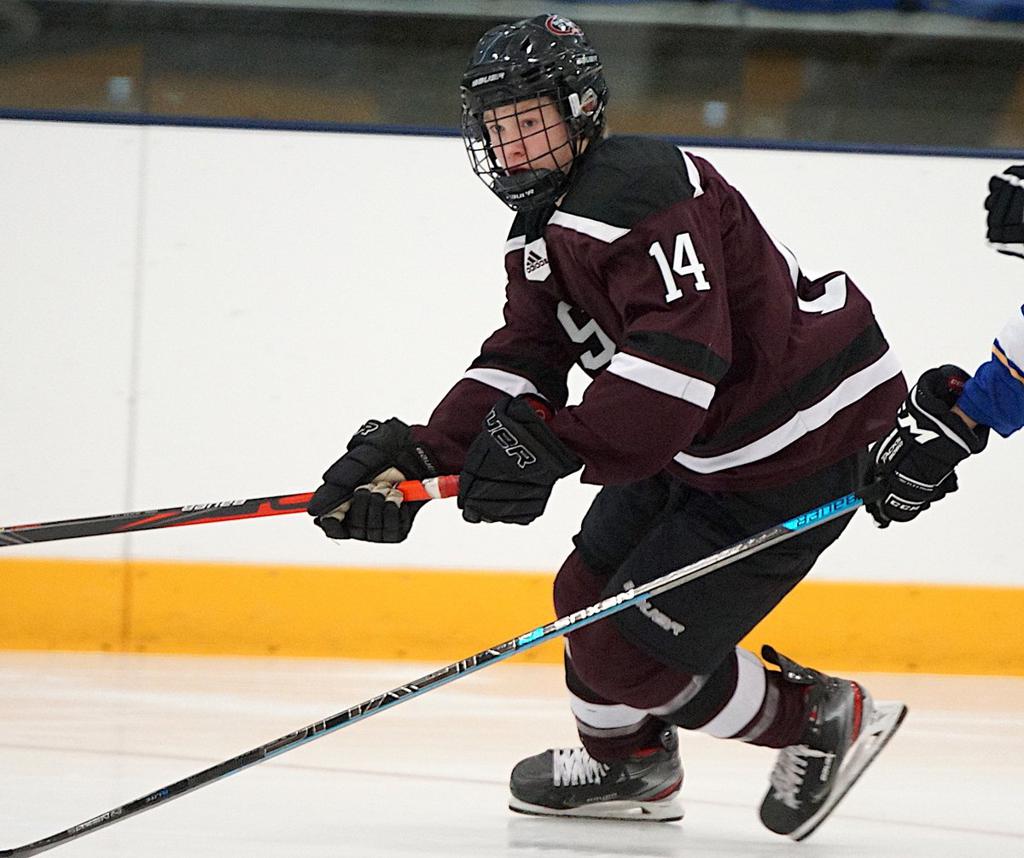 Shattuck-St. Mary's 16U forward Gracyn Sawchyn has impressed at every level of his young career.

There may be players at this weekend's tryout that are bigger, faster, and stronger than Shaugabay. On the other hand, there won't be a player as creative with the puck, or with space, as the Warroad native.

Shaugabay helped the Warriors back to the Class A State Tournament after a 10-year drought during the 2019-2020 season, splashing onto the high school scene with a 30-goal, 72-point freshman season. After losing running mate Grant Slukynsky to graduation, Shaugabay shouldered more of the scoring load for the Warriors in 2020-2021, finishing with 24 goals and 54 points in the shortened season.

Exceptional when it comes to anticipation on offense, Shaugabay has added new levels to his defensive games over the last two seasons, becoming a threat at the top of the defensive zone to poke, steal, and swipe pucks from opposing defensemen.

Whitelaw could be the next Rosemount native to move on to the NTDP after former youth hockey linemate and recent University of Wisconsin verbal commit Charlie Stramel made the jump last season.

A rink rat that plays a heady game, Whitelaw transitioned to Shattuck-St. Mary's after playing for the Rosemount youth organization, and recorded 14 goals and 28 points in his first year with the Sabres. Whitelaw's numbers jumped to 31 goals and 85 points in his second season with SSM's 14U squad, and he had nine goals and 26 points for the Sabres' USHS Prep team that went 28-4-2 this season. 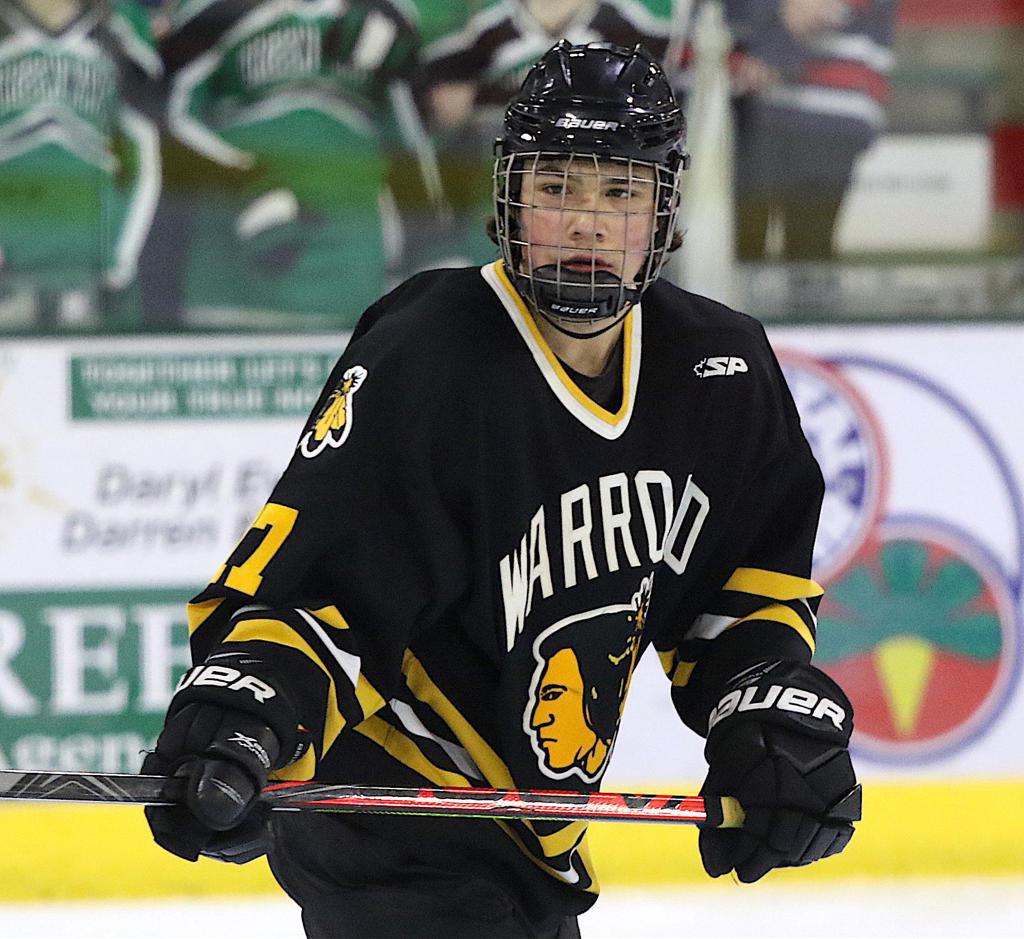 Warroad's Jayson Shaugabay has totaled 54 goals and 126 points in two seasons with the Warrior varsity.