"As you move up in the hockey world, nothing's going to be given anymore"

From his beginning as a talented but raw puck-rusher, Joey Pierce has morphed into a defender with an all-around game suited for the modern NHL.

More than anything, Joey Pierce is grateful.

He’s grateful for the on-ice education he received from the Hermantown hockey program.

He’s grateful to have managed to play around 50 games during the 2020-2021 calendar year, and he’s quick to point out that many players didn’t come close to that number.

And he’s grateful for a small break between his offseason program and the NHL Draft.

I reach Pierce on the banks of the Atlantic Ocean.

“I’m on the coast of Maine right now, on vacation,” Pierce said, his cell phone reception remarkably better than mine even though he’s watching the waves crash, and I’m pacing around the Club Room at 3M Arena at Mariucci.

“Our extended family has a cottage on the beach out here, so we try to get out here once or twice a summer.”

Cottage instead of cabin? Pierce already sounds like a surefire NHLer. 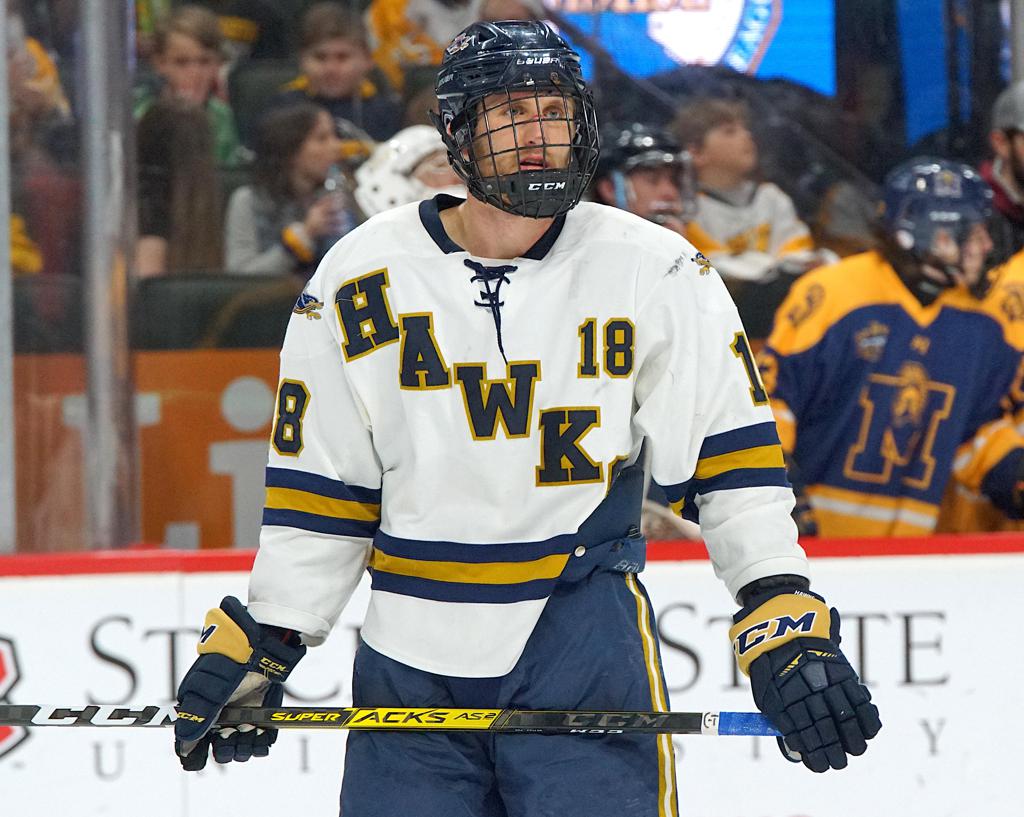 Joey Pierce made two trips to the Class A State Tournament as a Hermantown skater.

The NHL seems to agree, as the league’s Central Scouting has Pierce ranked No. 118 among North American skaters and the No. 47 defenseman.

“They see me as versatile because they’ve seen me play in all situations,” Pierce said of the feedback he’s gotten from NHL scouts and evaluators. “I played forward my sophomore year in high school. It taught me a lot about the game and gave me a different perspective.”

While Pierce appreciates his at times frustrating and uncomfortable experience at a new position, his production also gave fans and scouts alike an eyeful of his versatility. Pierce tallied 18 goals and 40 points in his lone season up front for the Hawks.

The previous season, Pierce also had an out-of-sorts adventure.

After spending his eighth-grade season playing a full varsity slate for Ely, a scenic hamlet located just south of the Canadian border, Pierce made the decision to attend Hermantown, a Class A power that was coming off back-to-back state championships at the time of Pierce’s transfer.

Tradition dictates that every Hermantown ninth-grader, no matter how talented, play for the town’s youth association before advancing to the high school team.

After posting a Bantam AA record of 35-16-4 and spending a year at forward, Pierce moved back to the Hermantown blue line to stay, racking up 16 goals and 55 points during the 2019-2020 season and adding 21 points in his senior campaign. Pierce credits the Hawks’ coaching staff for helping maximize his high school potential as a puck-moving defender.

“You know these coaches know what they’re doing because the results speak for themselves,” Pierce said. “We saw how many players they moved on (to college and pro levels), and that was huge in making that decision (to transfer).”

“In Ely, I was able to skate all winter and had a lot of opportunities to do that, but we never really played great competition,” Pierce said candidly. “In games, I would create bad habits, which would show in the summers and in times when I played (against) better competition.”

“There’d be times when I would rely on myself and not the whole team, and nothing good ever comes out of that. (Hermantown coaches) definitely got on me about that, but they coached around it, too,” Pierce added.

“When I finally figured it out, I started to get a lot more calls from colleges.” 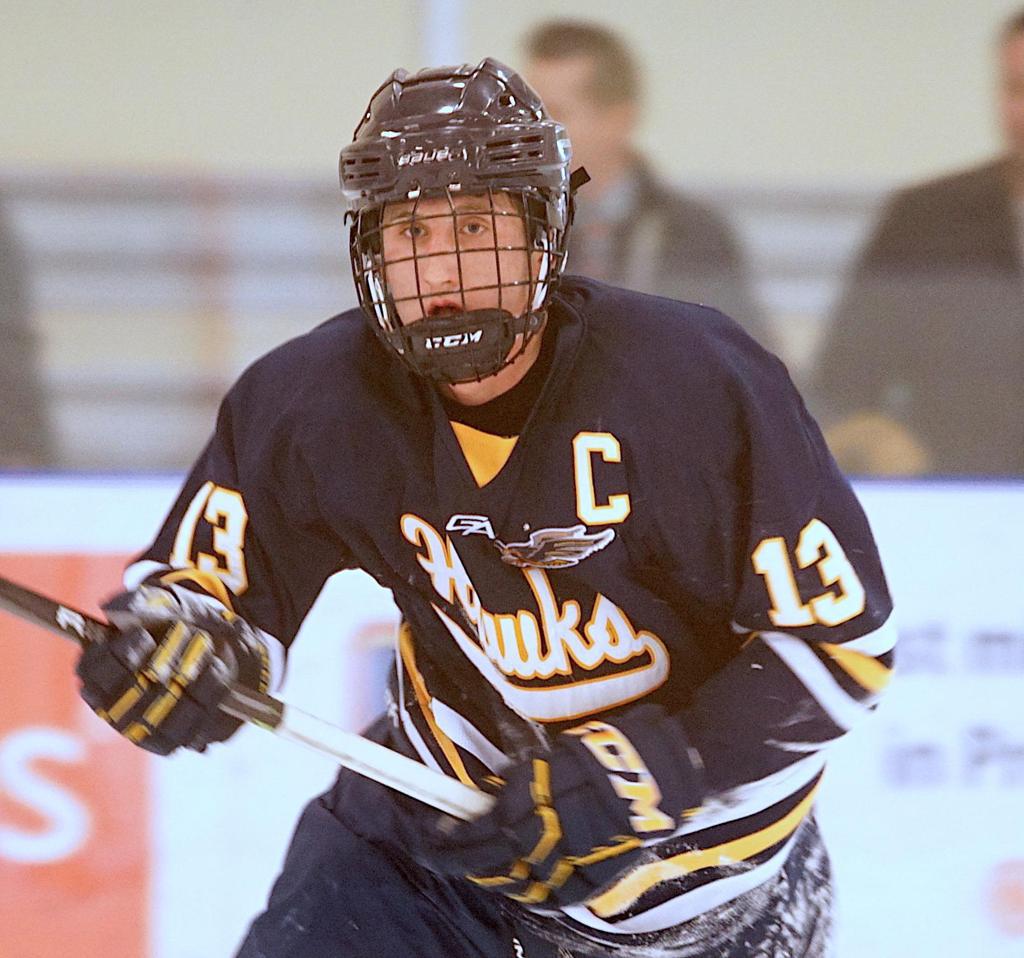 Pierce's Hermantown career began with a season of Bantams as a ninth-grader, then a year of playing forward as a sophomore.

The defensive standouts that have come out of the Hermantown system include former second-round pick Dylan Samberg, now in the Winnipeg Jets’ system, and Neal Pionk, who signed with the New York Rangers as a college free agent after two productive seasons with the Minnesota Duluth Bulldogs.

Samberg and Pionk were two of the older players that were a part of Pierce’s summer workouts over the last few months, and the trio was joined by former Duluth East defender and 2010 first-round pick of the Los Angeles Kings Derek Forbort.

“In the summers and offseason, being able to skate with some of the guys that have moved on is another special thing about Hermantown,” Pierce said. “All the alumni come back and skate, and they’re happy to have me and other high school players come out and skate with them as well.”

After his final high school season and handful of games with the NAHL’s Minnesota Wilderness, Pierce found himself on the ice with Samberg, Pionk, and Forbort four to five times a week during the spring, working almost exclusively on defensive positioning and tactics.

The trio of professionals wasn’t always easy on Pierce.

“We’d play games at the end (of the session), and they’d get on me, which I appreciated, if I was making bad passes, or not in the right spot,” Pierce said with a chuckle. “That’s the only way I’m going to get better, so I tried to get everything I could out of that opportunity.”

Off the ice, Pierce has been spending the bulk of his time in the weight room, packing extra muscle on his 6-foot, 196-pound frame.

“I didn’t skate for all of June because I had an ankle injury from the high school season that just lingered,” Pierce said, adding that the ankle injury wasn’t considered serious. “I wanted that to heal, so I spent all of June in the weight room, and I feel stronger than I’ve ever been.” 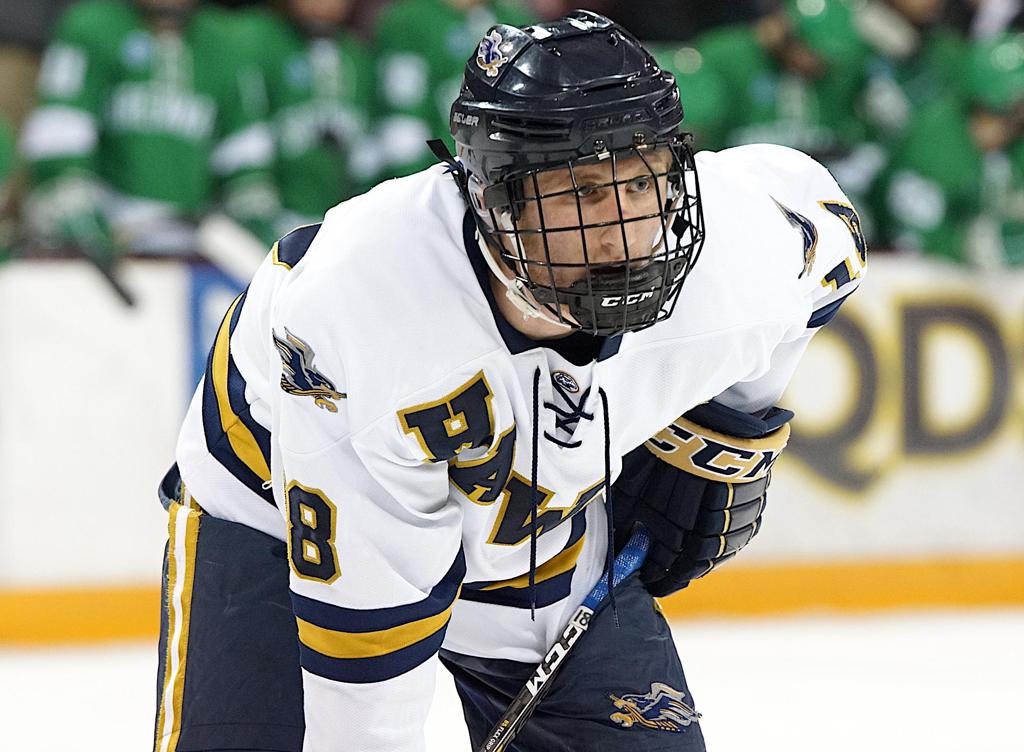 Pierce totaled 43 goals and 116 points in three seasons with the Hermantown varsity.

Following the workout plans of the USHL’s Lincoln Stars (who own his junior rights and, as of right now, who he’ll play for in the 2021-2022 season) and his future college program, Minnesota Duluth, has made him more powerful physically.

All that’s left for Pierce is to do what he’s always done - make the most of his next opportunity.

“As you move up in the hockey world, nothing’s going to be given anymore. I think it’s going to make me work that much harder to earn a job.” 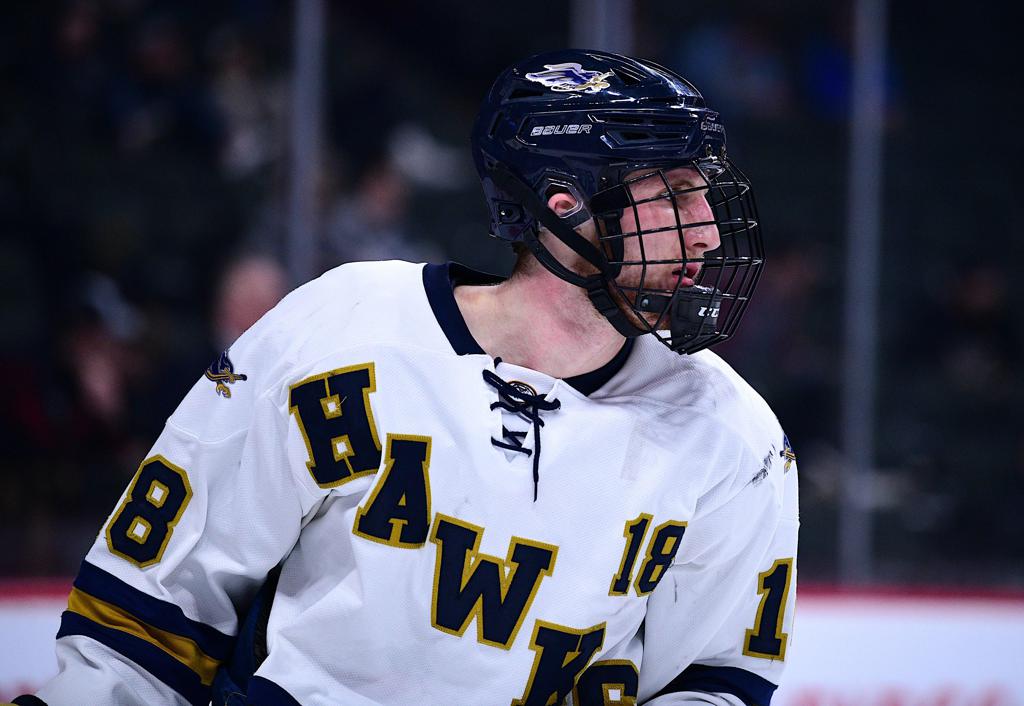 Pierce says he will spend the 2021-2022 season in the USHL with Lincoln, then transition to the blue line at Minnesota Duluth.