Duluth East enters unfamiliar territory after legendary head coach Mike Randolph stepped away from the program, and the Hounds now find themselves with one of their own behind the bench. 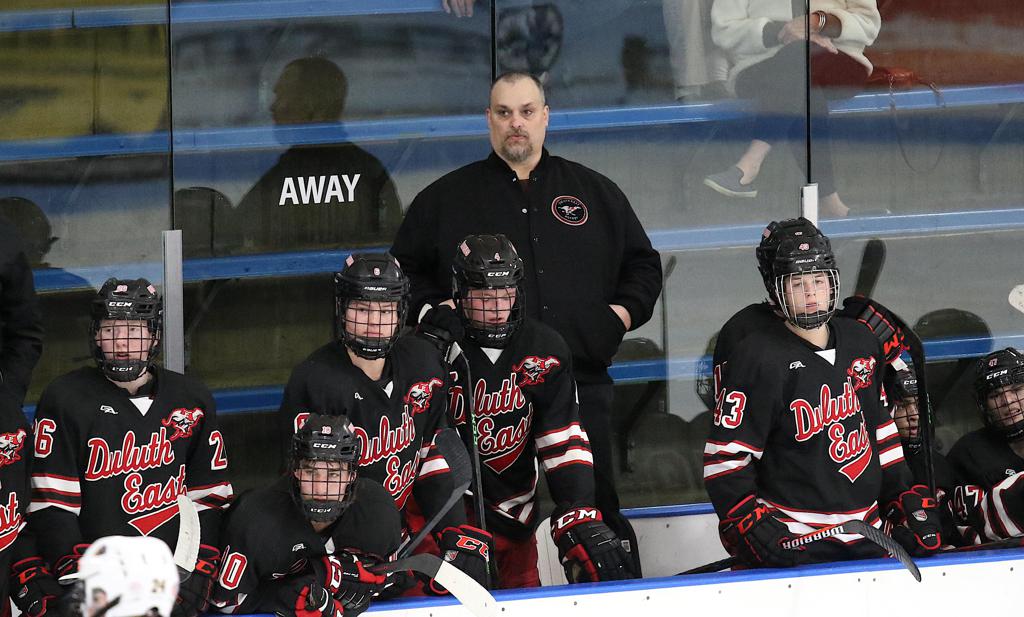 Steve Pitoscia, center, takes over the Duluth East program after a tumultuous summer. 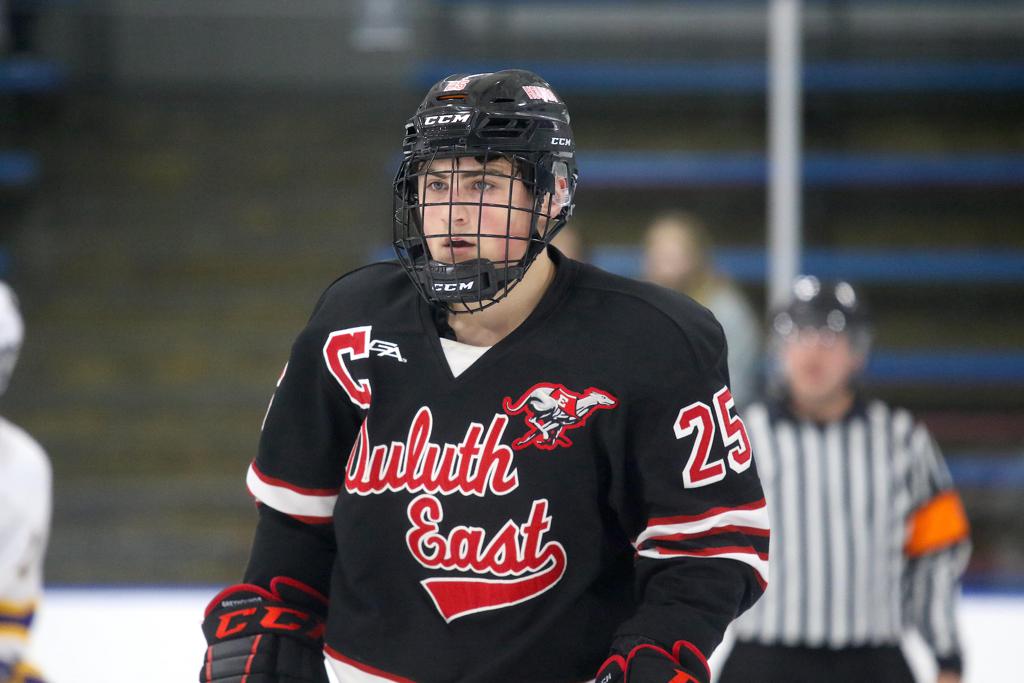 Junior defenseman Grant Winkler returns to the blue line as a captain this season for Duluth East.

On January 12, 2011, Brady Hoke was introduced as the University of Michigan's 19th head football coach in the program's history.

During his introductory press conference, Hoke was asked by a reporter from Toledo if Michigan, the country's all-time winningest Division I college football program, was still considered an "elite" job.

Hoke responded with the following display of eloquence: "This is Michigan, for God's sakes."

Unlike Hoke, Pitoscia's response was measured and kept in perspective scope.

"Well, I think it's a coaching job at a AA school in Minnesota, so it's a pretty good job," Pitoscia replied with a chuckle during a November interview.

The Hounds are reeling after the summer resignation of legendary coach Mike Randolph, one of the winningest coaches in Minnesota high school hockey history, and the team's bench boss for over three decades.

After leading Duluth East to state championships in 1995 and 1998, plus six runner-up finishes, Randolph vacated the head coaching position over the summer. In his well-attended press conference, he cited over-involved parents and lack of administrative support as his primary reasons for stepping aside.

A public divorce from the man who built the program into the pride of the port city, a coach who won 658 games in a hockey-mad market, cast a pall over the north shore's summertime, and Pitoscia says that the program is ready to place its focus elsewhere.

"I think everybody's just kind of moving forward," Pitoscia said. "Everybody that I know respects the heck out of what Mike has done, and what he built here. I sure know that a lot of what I know as a coach and what I know about hockey, period, the foundation of my hockey life comes from Mike Randolph."

You see, that's the other similarity between Duluth East hockey and Michigan football - having a Duluth East man in charge, a Hounds version of the fabled "Michigan Man," comforts alumni and attaches the incoming staff to the program's history.

"The benefit here is (that) I do understand the history, and the pride, and the tradition that comes with being a Greyhound." 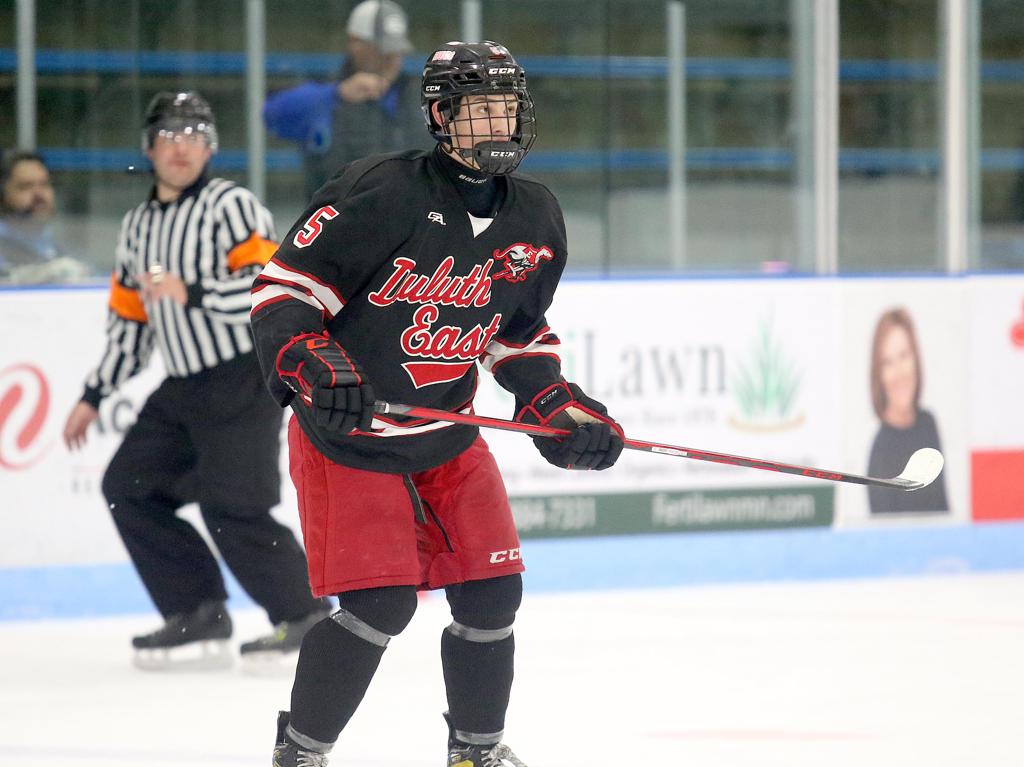 Cole Christian is Duluth East's returning scoring leader from last season, in which he recorded 17 points.

Pitoscia knows all that and more about the Duluth East program, coaching the Greyhounds' Bantam A (and later Bantam AA) program for 16 seasons before moving on to a coaching position with the Omaha Hockey Club.

Throw in four seasons as the coach of the Cloquet Bantam A's, and Pitoscia brings nearly a quarter-century of coaching experience to the East bench.

In those years, Pitoscia has learned to connect with players across multiple eras, and said that while players have certainly changed since the mid-1990s, he has done his best to adapt with them.

"The thing I learned over twenty-five years of doing this, is that the 'do this because I said so' mentality for kids, that's not how their lives are anymore," Pitoscia said. "Everything from what they're taught in school to their expectations is to think critically and use (their) brains," Pitoscia continued.

"I think it's important for them, from a learning perspective, to understand the why's. I think that understanding leads to more success down the line."

Down the line is the long game for the Hounds, as the team finished last season on a 0-5-1 skid and lost leading scorer Kaden Nelson and starting goaltender Dane Callaway to transfer.

However, Pitoscia is bullish on the leadership qualities of this year's seniors and the talent of the overall roster, mentioning no less than six individual players who could make an impact this season.

"I think our seniors are some pretty tough, resilient kids," Pitoscia said. Lars Berg leading the charge coming back, and Tyler Smith back on the blue line. (They're) a couple of high-character kids that are excited to lead this program through the transition, and I think they're some wonderful kids to do so."

With just three underclassmen on the roster, the Hounds have as much experience and veteran leadership as any team in Section 7. A new coach could inspire the players to circle the wagons and block out the noise surrounding the program.

If goaltending stabilizes under junior Zander Ziemski or senior Fletcher Dirkers and a handful of talented juniors and sophomores emerge as standouts, the Hounds could prove to be a tough out in the postseason.

If Pitoscia and his staff can achieve the ultimate coaching goal, a total team buy-in, the unsatisfied rumbles around the lake they call gichi-gami may subside.

But for now, Pitoscia will simply be grateful to be home, guiding a program he so clearly loves.

"The last couple of years, my (primary) job has actually been hockey," Pitoscia said. "So to come take a high school job, you've got to really love it."

"There was a sense of duty that called me home to do it for sure." 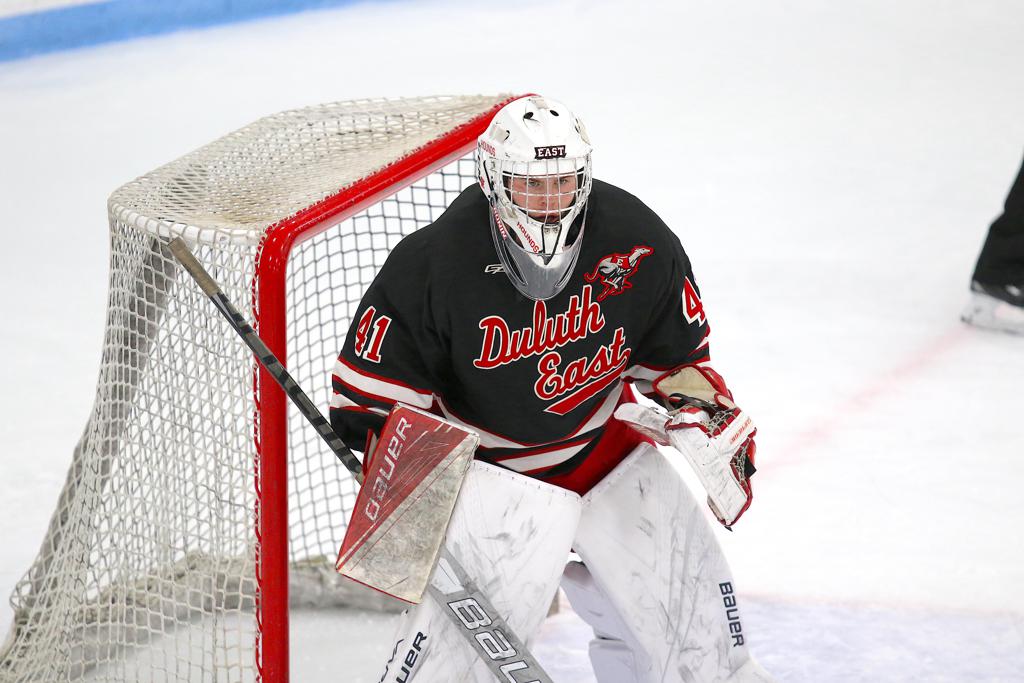