The final four teams will meet in Blaine to decide this year's NAHL champion.

For nearly five decades, the Robertson Cup has represented the ultimate goal for NAHL teams. The cup is a silver beacon of hope for each franchise during the preseason and then a dream slowly coming into focus during the dog days of the hockey calendar. Finally, for four teams, the Robertson Cup feels almost in reach as those squads venture to Minnesota for a chance to hoist it in the air.

For the last four years, the Robertson Cup has been awarded on the ice to the NAHL champion at Blaine's Fogerty Ice Arena. Fogerty provides an intimate atmosphere for what is sure to be another round of rowdy games this year.

Continue reading for a brief rundown of this year's participating teams.

The St. Cloud Norsemen (47-17-4) enter this year's Robertson Cup playoffs on a three-game winning streak, defeating Central Division rival Aberdeen in four games in the divisional round. The last two victories for the Norsemen over the Wings came by identical 3-2 scores.

Forward Ryan O'Neill led the Norsemen in scoring during the regular season with 30 goals and 80 points and has continued his production during the playoffs. O'Neill leads St. Cloud in both assists (9) and total points (11) during the postseason. Following O'Neill in the scoring are Max Strand with three goals and eight points and defenseman Broten Sabo with four goals and seven points. Strand is building on a successful high school season with Roseau, during which he was named Minnesota's 2022 Mr. Hockey.

Goaltender Thomas Bolo has posted a record of 6-1-2 during the postseason, with a goals-against-average of 1.85 and a .929 save percentage.

Meeting the Norsemen in the first round will be the Anchorage Wolverines (39-20-4), who bounced back after a 7-2 loss to the Minnesota Magicians in the Midwest Division final series with a 4-3 double-overtime victory and a 5-1 win in the decisive game four.
Colton Friesen and Cameron Morris lead the Wolverines with seven points each, with Hunter Bischoff and Talon Sigurdson just behind with five points apiece. Sigurdson, a native of Sartell, Minn., led the Wolverines in regular-season scoring with 30 goals and 59 points.

Between the pipes, goaltender Raythan Robbins enters the weekend with the best save percentage among Robertson Cup goaltenders at .946. 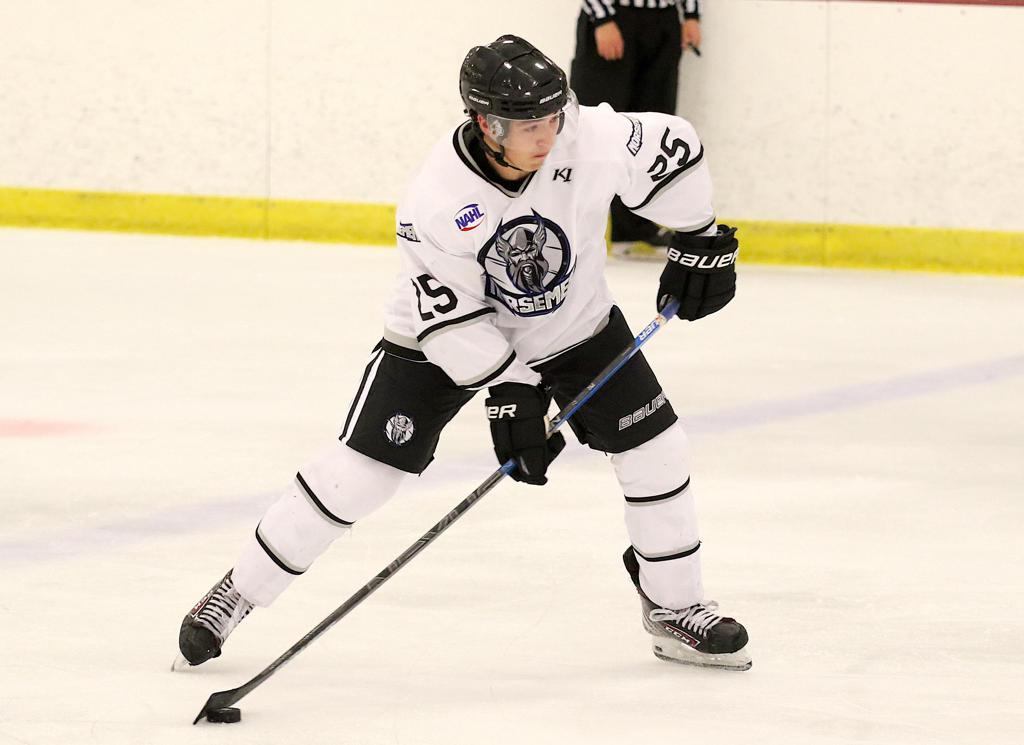 Evan Murr has six points for the St. Cloud Norsemen during this year's postseason.

In a series pitting two "New" states, the New Jersey Titans will face the New Mexico Ice Wolves for a shot at St. Cloud/Anchorage winner.

The Titans are tied with St. Cloud for most wins coming into this weekend with 47. Like the Norsemen, the Titans dropped the opening game of their divisional series against Jamestown before rattling off three consecutive wins, including a triple-overtime goal by Stephen Willey to clinch the series in game four.

According to the sheer numbers, the Titans may wield the field's deepest and most balanced offense. Nick Ring, Ryan Coughlin, Chris Carroll, and David Posma have all recorded nine points during the postseason.

Making their first Robertson Cup appearance will be the New Mexico Ice Wolves, who have to be the sentimental favorite based on their inexperience in the final four and the method of how they reached Blaine.

In a thrilling five-game series, the Ice Wolves upset the No. 1 seed in the South Division, the Lone Star Brahmas. Lone Star took the first two games before New Mexico scrapped its way to three consecutive wins, including back-to-back one-goal victories in games four and five.

The duo of Dillan Bentley and Sully Scholle has powered the Ice Wolves to this point during the playoffs, with Bentley tallying four goals and 14 points and Scholle posting six goals and 12 points. Scholle's point totals are even more impressive when you consider that he leads all Robertson Cup skaters in playoff penalty minutes with 28.

Goaltender Beni Halasz has notched two shutouts during the postseason.