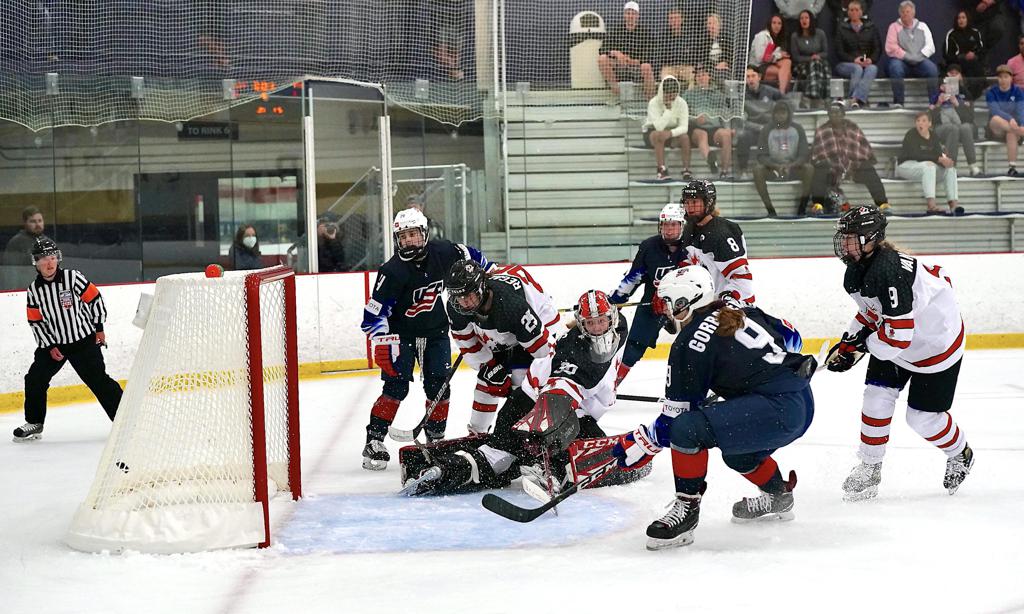 Kelly Gorbatenko (9) scores for Team USA during a 3-1 scrimmage win over Team Canada in Blaine, Minn. 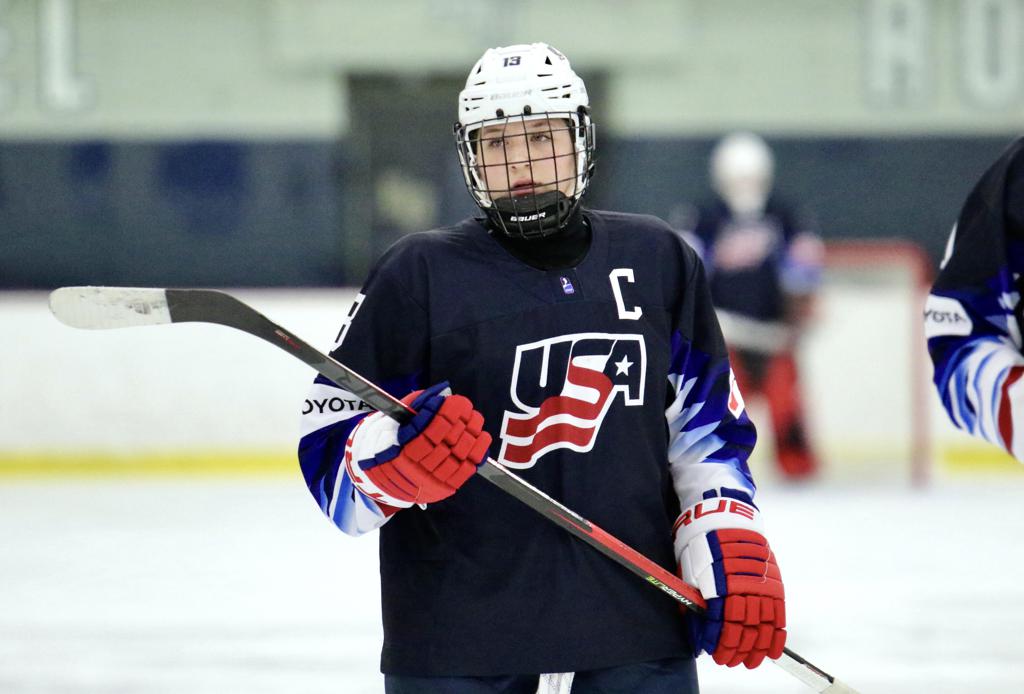 Chisago Lakes standout Dani Burgen is in her second stint with Team USA, and is one of two players (along with Kirsten Simms) to have played for Team USA during its run to the gold medal in 2020.

Since 2008, the top U18 female players in the world have gathered for a week of games and glory, skating in venues from Stockholm to St. Catharines.

After taking an unscheduled hiatus due to the varying international COVID-19 rules and regulations, the IIHF U18 Women's World Championships is back with a full field.

The eight teams will be placed into two groups, with the top four seeds making up Group A and the other squads in Group B. After the Preliminary Round, all four Group A teams and the top two teams from Group B will advance to the Playoff Round. The remaining teams from Group B will play a best-of-three series to determine relegation.

Group A and Group B assignments are below. 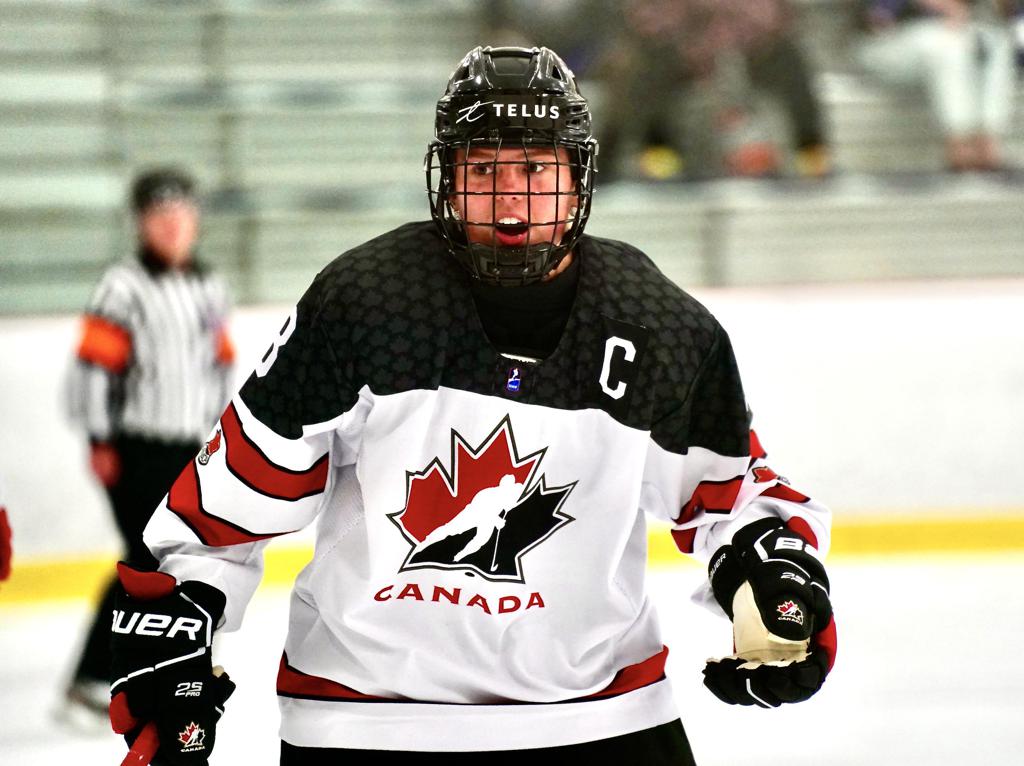 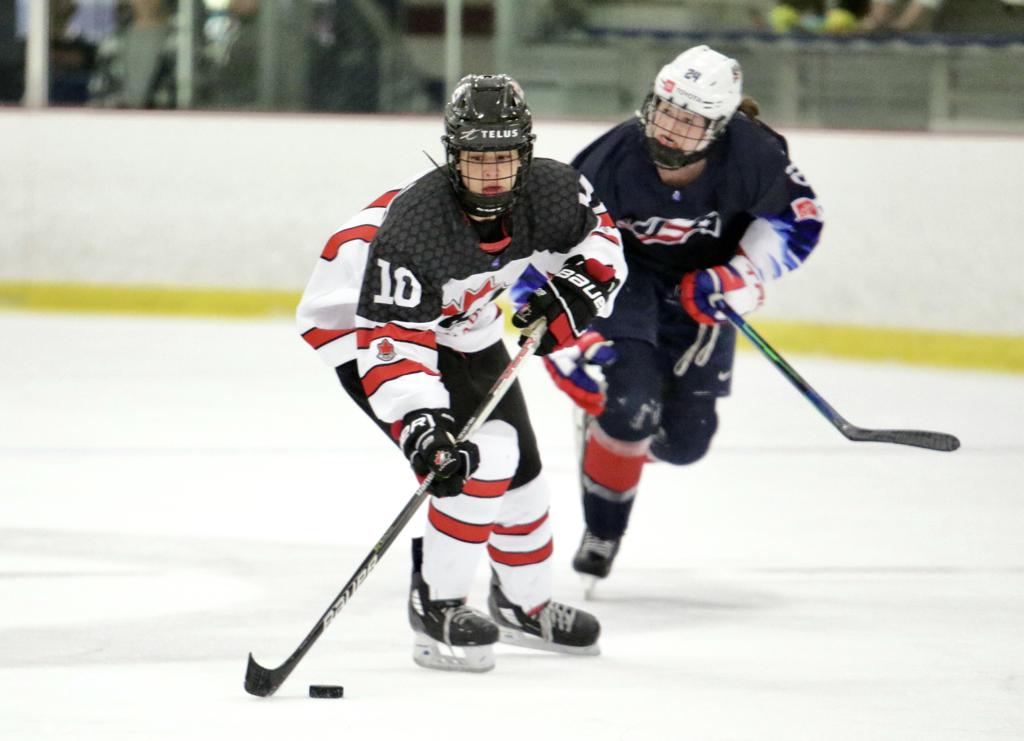 Jade Iginla, daughter of Hockey Hall of Fame Jerome Iginla, is a key forward for Canada.

With 13 gold medals between the countries, it's hard not to consider the North American powers, the United States and Canada, as the favorites going into Madison.

To date, the U.S. has won eight of the 13 tournaments and finished runner-up five times, all against Canada. Each country has had its own run of three straight gold medals, with the Canadians winning top honors from 2012 to 2014 and the Americans capturing gold four consecutive years from 2015 to 2018.

In 2018, Sweden became the only European team to make an appearance in the gold medal game, falling to Team USA 9-3. Sweden has won five bronze medals since 2008.

This year, Team USA and Team Canada met in a pre-tournament exhibition match, drawing a sizable crowd to the Super Rink in Blaine, Minn., despite being played on a Tuesday afternoon. The Americans took the 3-1 "win" in that game, getting goals from Minnesotans Emma Peschel and Ava Lindsay, plus one from Barrington, Ill. native and Wisconsin commit Kelly Gorbatenko. 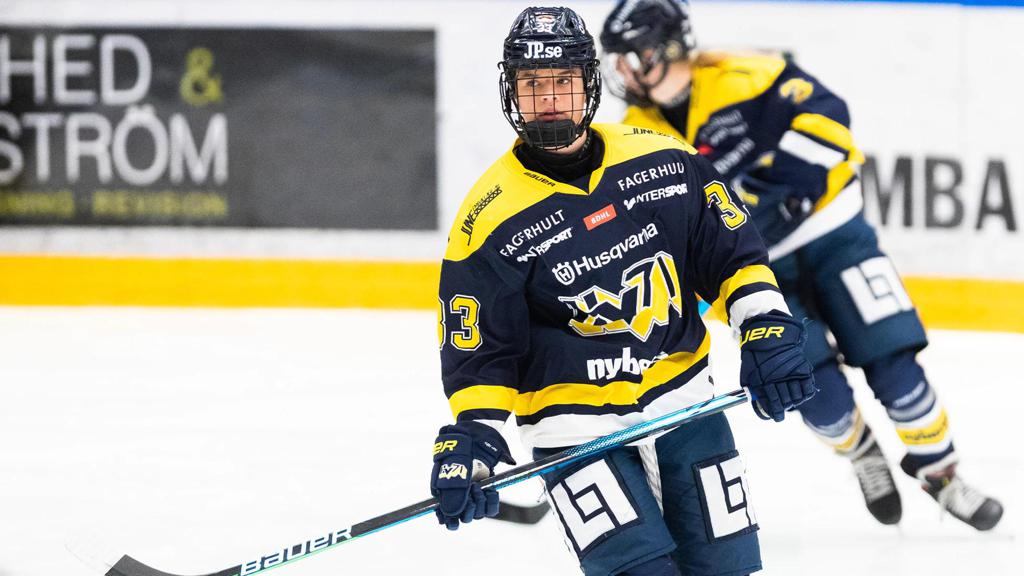 Defender Mira Jungaker will be one to keep an eye on for Sweden this week. Photo: Axel Boberg/Bildbyran

Eight Minnesota products in the red, white, and blue 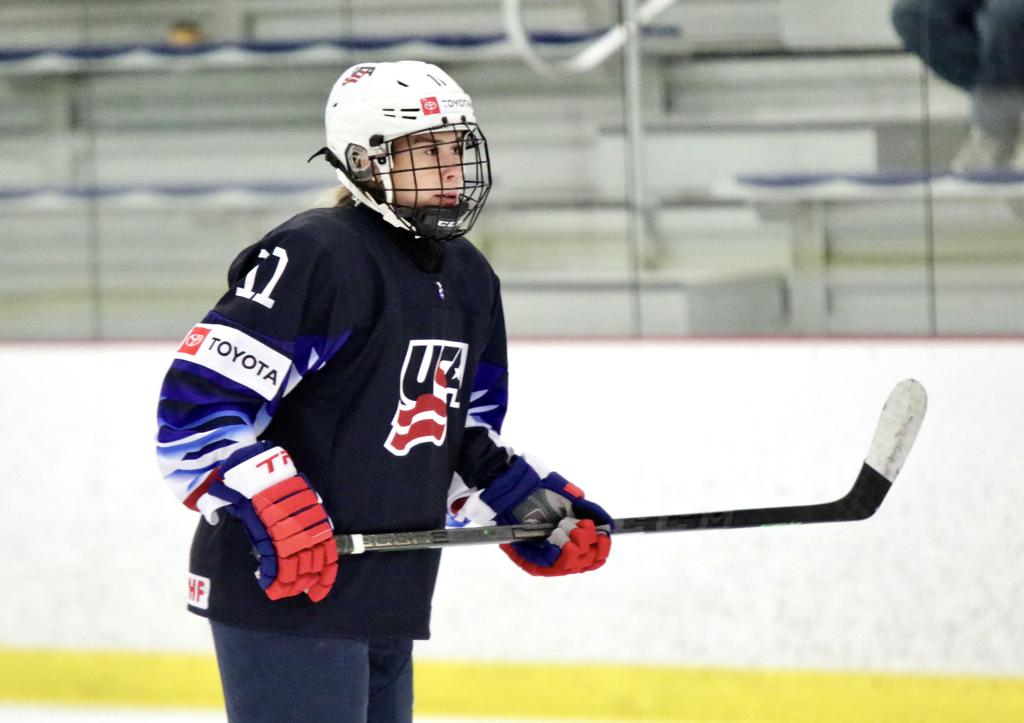 Josie St. Martin is one of two 2006-born players on this year's Team USA roster.

The State of Hockey will be well represented this week in Madison, with eight players who skated for Minnesota high school programs last season on the Team USA roster.

Chisago Lakes standout Dani Burgen will captain the team and is one of two players that participated during Team USA's run to the gold medal in 2020. The other player who played for that 2020 team is Kirsten Simms, who will serve as an assistant captain.

Other forwards on the roster include Lakeville South's Claire Enright, Minnetonka's Ava Lindsay, and Stillwater's Josie St. Martin. Enright and Lindsay lined up with Burgen during the Canada scrimmage. St. Martin is one of two 2006-born players on the team, along with Shattuck-St. Mary's forward, Maggie Scannell. 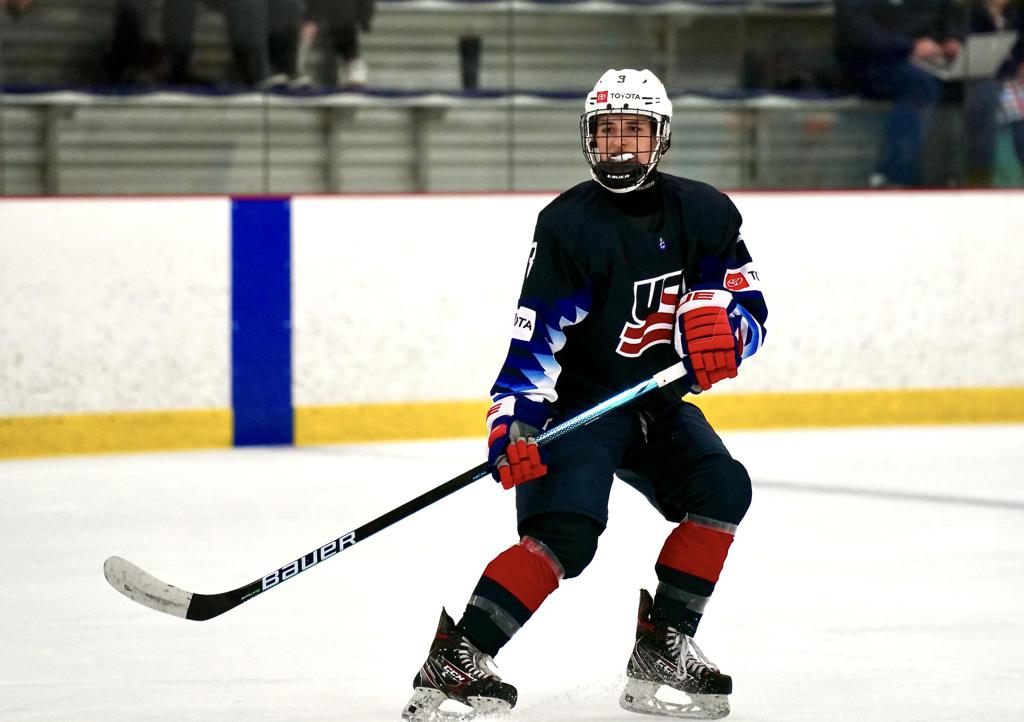 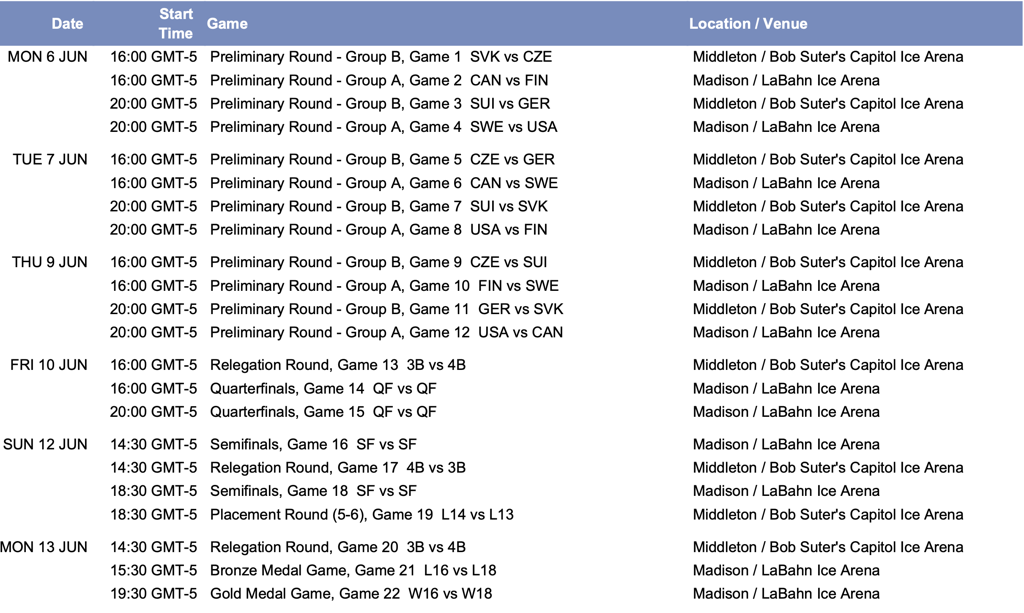