Dispatches from the West (Edmonton Mall)

Five observations from the first day of the 2012-birth year Brick Invitational.

Youth hockey has had a gaping hole in its summer calendar for the past two summers.

For 2020 and 2021, the famed Brick Invitational was canceled due to COVID-19 concerns, rules, regulations, what have you.

For the 2011 birth year, their tournament was rescheduled to the week of June 29 through July 1. Played out, the Connecticut Jr. Rangers emerged as back-to-back Brick champs after a dramatic overtime win over the Western Selects. The win makes the Jr. Rangers the only U.S. squad to win consecutive championships at The Brick.

While the NHL's Battle of Alberta between the Edmonton Oilers and Calgary Flames draws top billing during the winter, the opening game of The Brick's 2012 birth year tournament featured a pair of heavyweights from the land they call "yours to discover."

With a 7:30 AM puck drop, the Toronto Bulldogs edged Toronto Pro Hockey 2-1 in front of a West Edmonton Mall crowd still waiting for its double-double orders as the Zamboni took the ice between the second and third periods.

Nate Deagazio and Lucas Sieradzki each scored for the Bulldogs, while Joshua Hackett netted the lone goal for Pro Hockey. 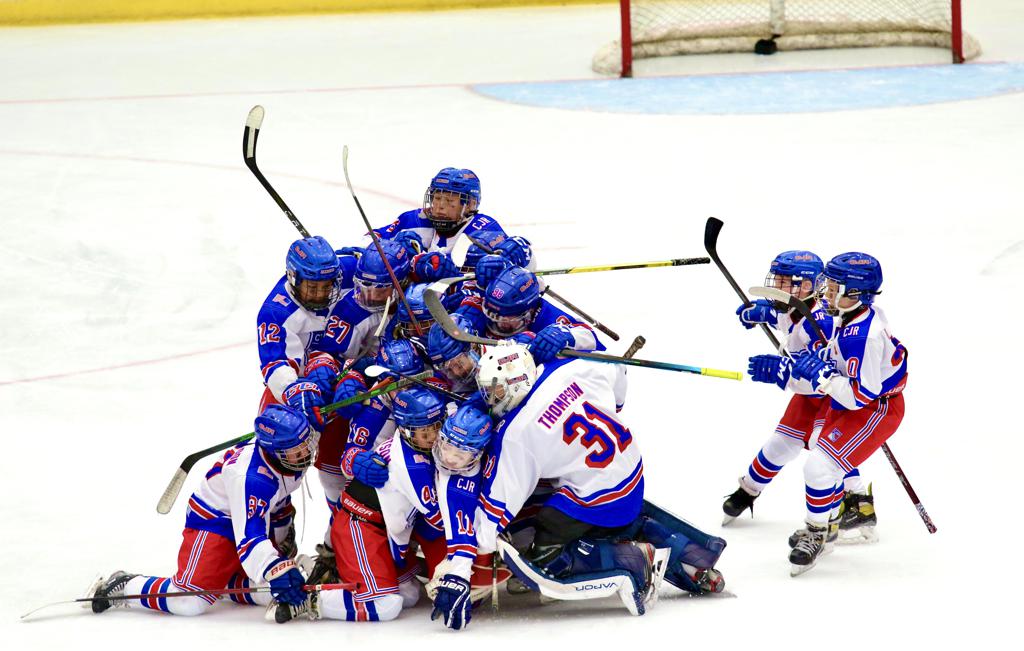 The Connecticut Jr. Rangers celebrate after Jack Brayman scored in double-overtime in Monday's win over the Saskatchewan Jr. Pats.

If you skipped the opening paragraph, shame on you. You would have known how the 2011 Connecticut Jr. Rangers won The Brick's rescheduled tournament in extra innings over the Western Selects.

After Andrew Hargadon scored in the second period for the Jr. Rangers and Saskatchewan's Tyvan Anderson tallied the equalizer three minutes later, the scoring ceased through periods three and four. In the two-on-two, double-overtime period, CJR's Jack Brayman polished off the Jr. Pats to send CJR into Tuesday's games with a 1-0 record.

Monday afternoon's tilt between Team Brick Alberta and the BC Jr. Canucks will go down in YHH's memory as one of the loudest, most raucous crowds we've ever seen inside the West Edmonton Mall.

No instrument was off-limits. The sides included horns, cowbells, drums, and whatever else could be made loud by banging upon. Both sides represented their provinces with passion and enthusiasm and were rewarded with a nailbiter. While Team Brick Alberta emerged with the hard-fought 2-1 win, the Albertans and Jr. Canuckleheads set a new standard for crowd noise. 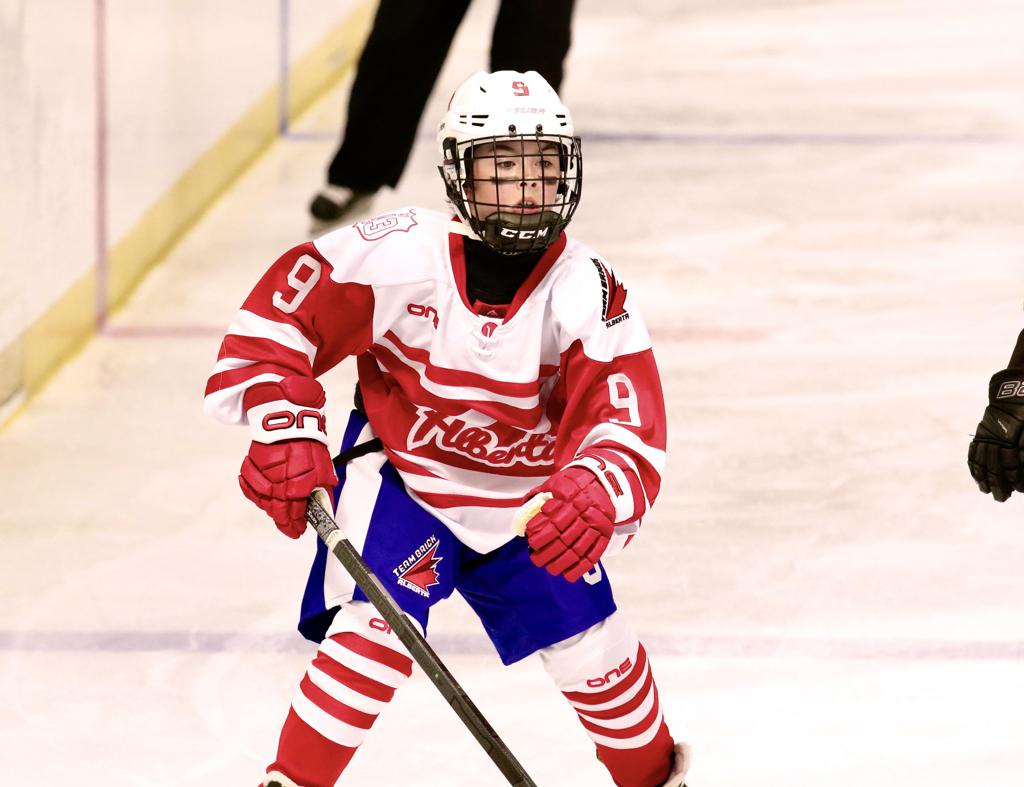 Myer Hipkins notched one of two goals scored by Team Brick Alberta in Monday's win over the BC Jr. Canucks.

Team Minnesota scored the first four goals on its morning game against Detroit and connected on all three power-play chances. The double-digit performance showed off the team's offensive potential, but Team Minnesota also took five penalties. Detroit scored two of its three goals with the man-advantage.

Game two against budding rival, Manitoba Jr. Ice, saw Team Minnesota click on all cylinders. Two goals in the second period and two more in the third led to the 4-0 final, which avenged a 5-4 loss to the same Manitoba squad in the North American Hockey Classic finals this past spring.

Statistically, Cade Christensen and Jack Allgood are tied atop the scorer's board with four points apiece. 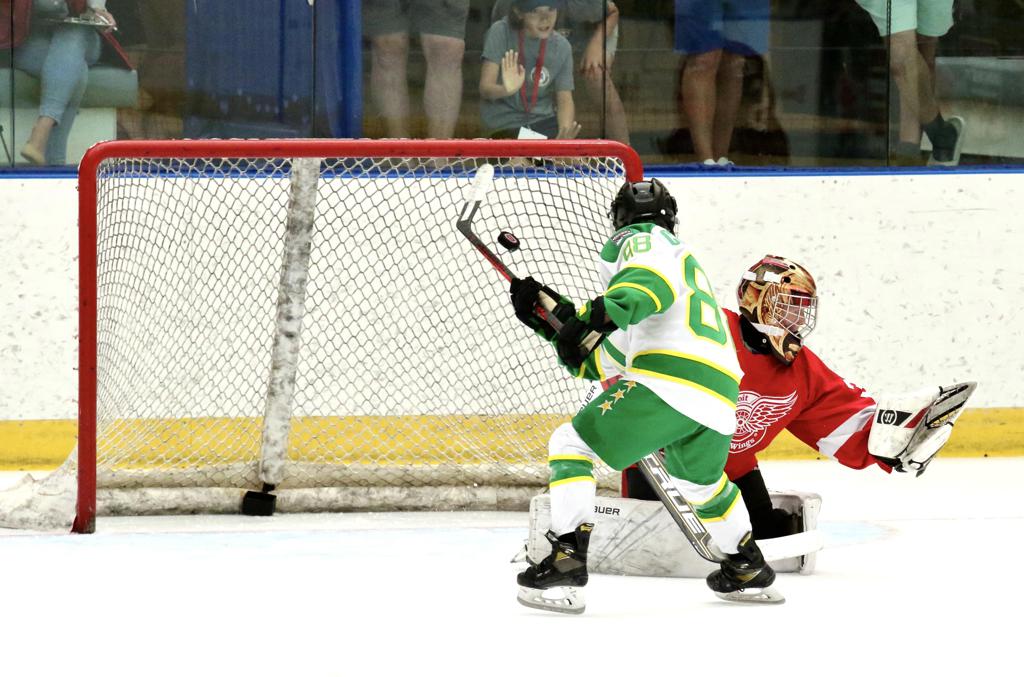 Team Minnesota's Cade Christensen scores during Monday's 10-3 win over the Detroit Jr. Red Wings. Christensen is tied with Jack Allgood for the team lead in scoring with four total points.