Starting off the large group of incoming freshmen is Cal Thomas, who will join a very talented and upper-class-laden defensive group. Hailing from the northwest suburb of Maple Grove, Thomas had three successful prep hockey seasons with the Crimson before moving on to play in the USHL last season. In high school, Thomas recorded 68 points (17G, 51A) in 81 total games, resulting in a point-per-game average of 0.84. In his three-year high school career,

Thomas was fortunate enough to reach the state tournament twice, reaching the consolation championship as a junior and the semifinals as a senior. The Crimson lost in overtime of the 2021 Class AA State Tournament final to Eden Prairie in the most exciting game of the event.

Last season in the USHL, Thomas started with the Sioux Falls Stampede before being traded mid-season to the Chicago Steel, tallying a total of 25 points (4G, 21A) and 59 penalty minutes in 64 games played. The Arizona Coyotes selected Thomas in the 2021 NHL draft with pick No. 171 of the sixth round.

Next up is a highly skilled power forward, Connor Kurth, who will come to campus after spending two full seasons with the Dubuque Fighting Saints of the USHL.

In his two seasons playing junior hockey, Kurth tallied 126 total points (52G, 74A) with a plus/minus of 29 in 118 games played. His 81 points in last year’s regular season (a point-per-game average of 1.31) placed him second on the Fighting Saints and fifth in the entire league in scoring. After this wildly successful season, Kurth was selected to the All-USHL Second Team while also earning USA Hockey’s 2022 Dave Tyler Player of the Year Award. The Dave Tyler POTY Award recognizes the most outstanding American-born player in junior hockey each year.

A native of Elk River, Kurth decided to go the Tier I hockey route, playing two seasons with Gentry Academy’s Galaxy Tier I teams before joining the USHL in what would’ve been his senior year of high school. In his last two seasons of Tier I play, Kurth recorded 99 points (45G, 54A) in North American Prospects Hockey League play.

After not being selected in his first year of NHL draft eligibility, Kurth was picked No. 192 overall by the Tampa Bay Lightning in this year’s draft. 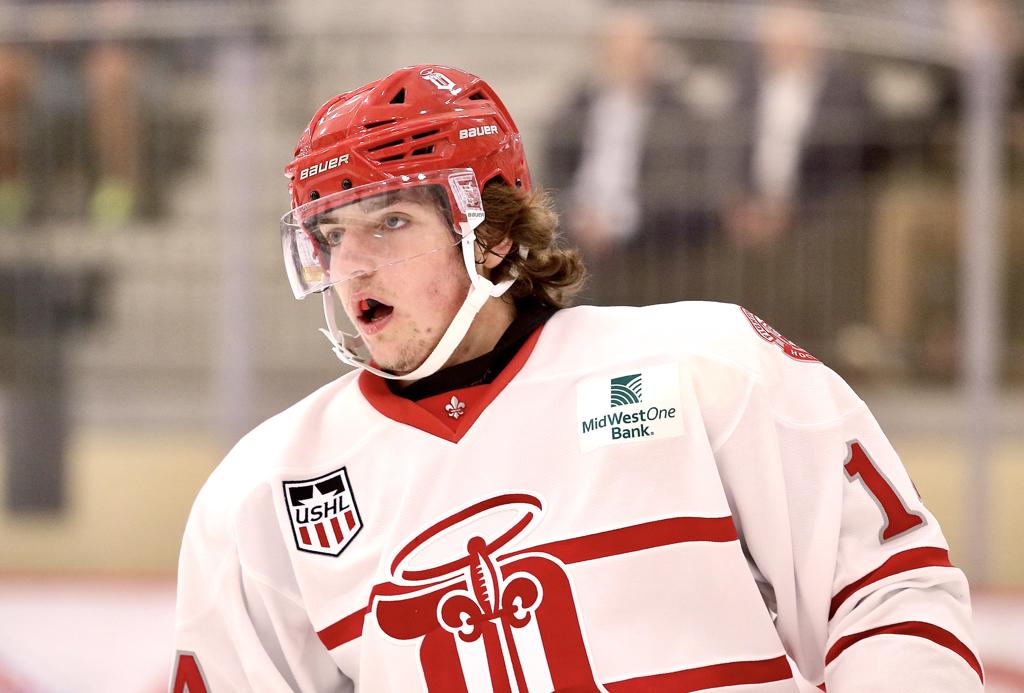 Elk River native Connor Kurth was selected in the sixth round of this summer's NHL Draft by the Tampa Bay Lightning.

A native of Mound, forward Garrett Pinoniemi will suit up for the Gophers after three seasons in the USHL, all with the Sioux Falls Stampede. In his junior hockey career, Pinoniemi dressed in 120 total games, recording 75 total points (24G, 51A) and 75 penalty minutes. From a stats perspective, Pinoniemi had his strongest season with the Stampede in 2020-21, where he tallied 37 points in 50 games, placing him second on the team in points scored that year.

Prior to the USHL, Pinoniemi played three seasons of prep hockey, starting with Delano High School as a freshman before transferring to Holy Family Catholic for his sophomore and junior years. As a freshman at Delano during the 2016-17 season, Pinoniemi played alongside recent Gopher captain and Hobey Baker finalist Ben Meyers, with the Tigers putting up a 26-4-1 record and claiming the consolation championship of the state tournament that season. His prep career ended with 139 points (53G, 86A) in 86 games, for a point-per-game average of 1.62. 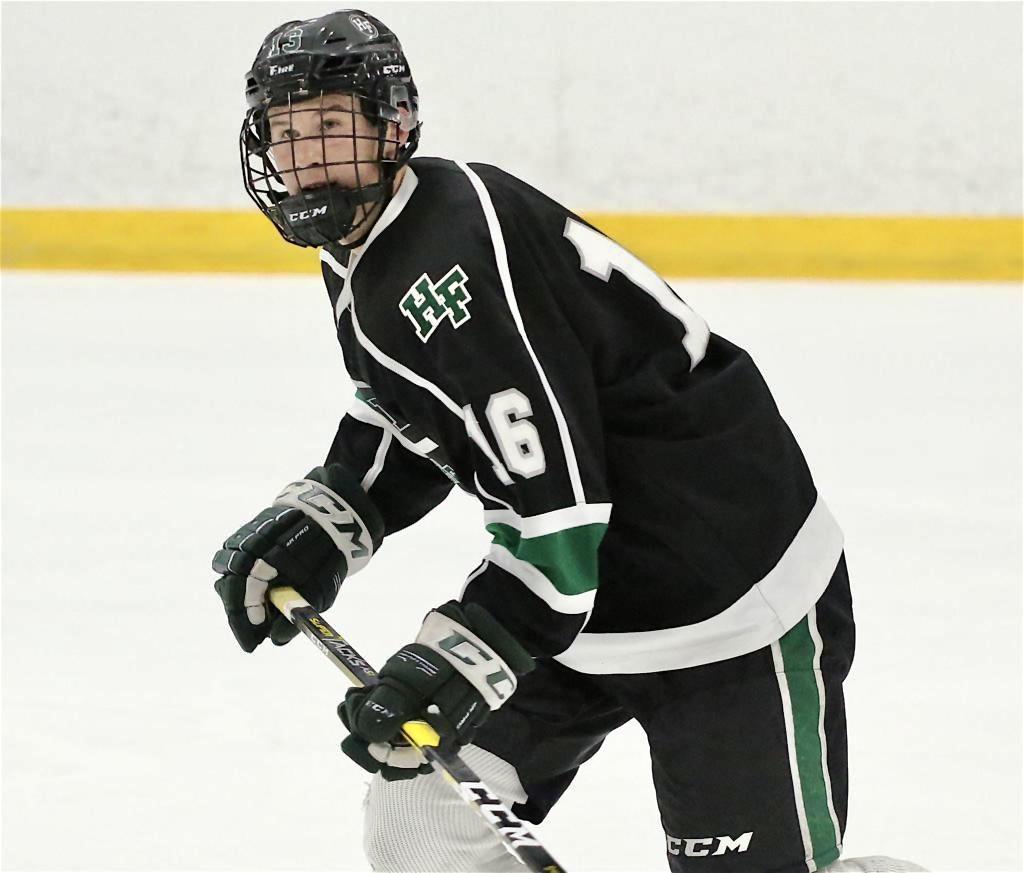 Our ensuing freshman, Brody Lamb, hails from the small town of Byron, MN, located just west of Rochester. A forward and efficient playmaker, Lamb made a name for himself first in the Dodge County youth system, winning Youth Hockey Hub's 2017 Wiz Wyatt Award and later playing Class A high school hockey for the Dodge County Wildcats.

In his junior year, Lamb was selected as team captain and helped lead the team to the school's first-ever state tournament appearance, with the Wildcats finishing runner-up to Gentry Academy. Lamb put up gaudy numbers in his two seasons of high school hockey, finishing with 159 points (101G, 58A) in 48 games played for a point-per-game average of 3.31.

After deciding to forego his last season of Minnesota prep hockey, Lamb joined the Green Bay Gamblers of the USHL, who selected him with the forty-ninth pick of the 2019 USHL Futures Draft. Last season with the Gamblers, Lamb tallied 41 points (19G, 22A) in 62 games, landing him tied for fourth on the team in points. Lamb was selected in the 2021 NHL Draft by the New York Rangers with pick No. 104 of the fourth round. 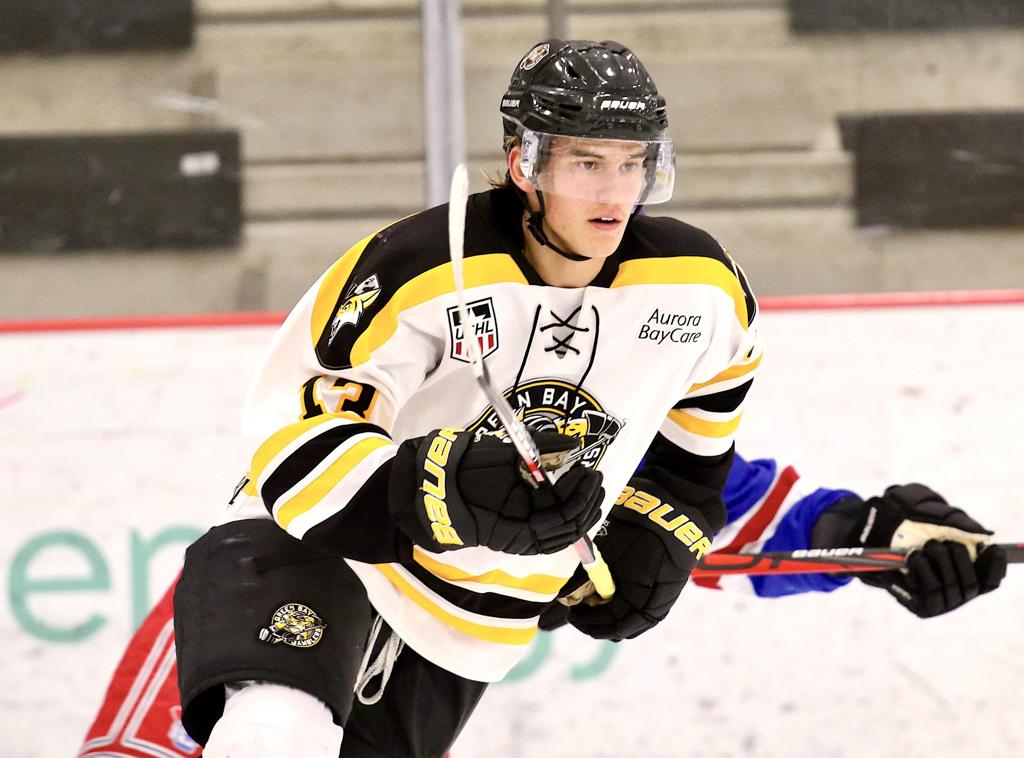 Next up, we have the two Mittelstadt brothers, John and Luke, who decided to follow in their older brother Casey's footsteps and play college hockey for the Gophers, with both making their verbal commitments on the same day back in June 2018.

We will start with middle brother and forward, John, who played three seasons at Eden Prairie High School, with a three-year career total of 121 points (41G, 80A) in 88 games. As a senior and team captain in the 2019-20 season, John had his most prolific season, tallying 58 points (20G, 38A) in 31 games en route to a second consecutive runner-up finish at the state tournament.

Post high school, John moved on to the USHL, playing two seasons with the Green Bay Gamblers, who selected him in the 2017 USHL Entry Draft. This marks the second time that John went on to play for the same team as older brother Casey, with Casey appearing in twenty-four games with the Gamblers post his high school season in 2016-17. In his two USHL seasons, John suited up in 109 games and tallied 44 points (19G, 25A) with 54 penalty minutes.

Rounding out the Mittelstadt trio is Luke, a do-it-all defenseman who joins the Gophers after an immensely successful season with the Lincoln Capitols of the USHL, who selected Luke with the second overall pick in the 2019 USHL Futures Draft. That high selection paid off for the Capitols last season, with Luke leading the team in points scored with 64 (24G, 40A) while helping the team reach their first-ever playoff berth and first-ever Clark Cup Finals. That points tally placed Luke third overall for defensemen in the league while earning him four USHL Defenseman of the Week awards and culminating with an All-USHL First Team selection.

Like both older brothers, Luke played three prep seasons with Eden Prairie High School, where he recorded 102 points (19G, 83A) in 86 games played and was selected to be the team's captain his senior year. However, unlike both older brothers, Luke was the only brother to secure a state tournament championship, winning the title in 2021 over Lakeville South and earning him endless bragging rights. Off this wildly successful senior season, Luke was selected as a Mr. Hockey Finalist. Casey won the prestigious award in 2017. 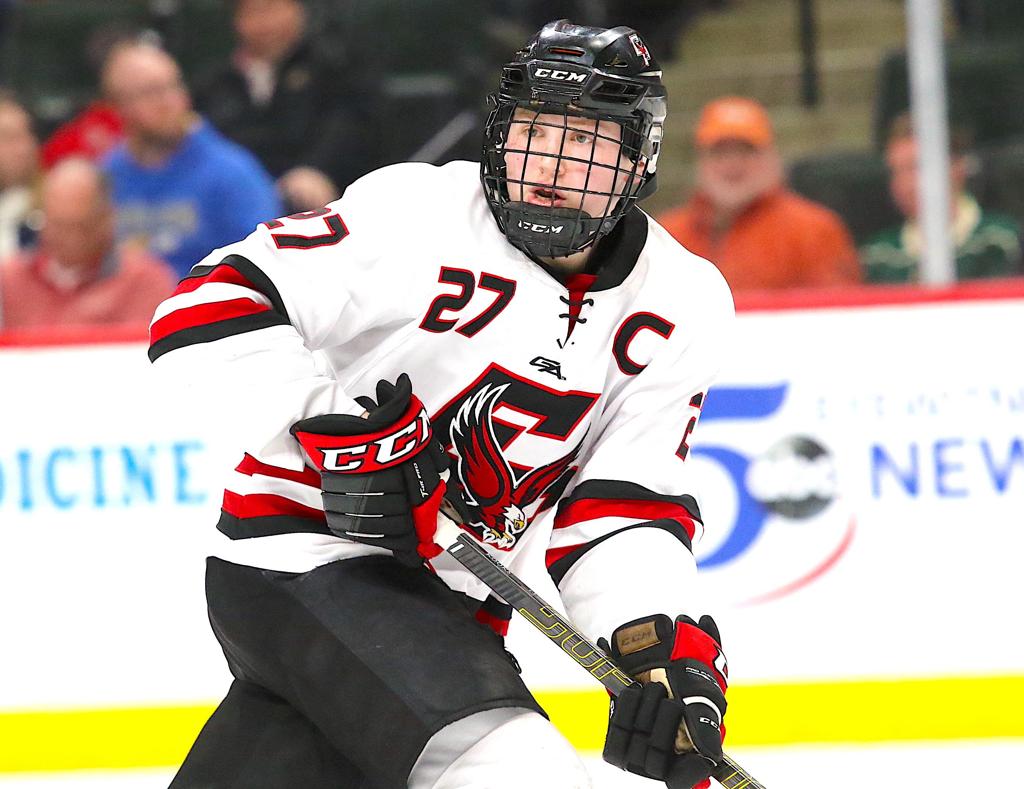 Luke Mittelstadt, the youngest of the hockey-playing trio of Mittelstadt brothers, brings skill and sense to the Golden Gopher blueline.

Our ensuing freshman is forward Charlie Strobel, a native of Stillwater who most recently played with the Trail Smoke Eaters of the British Columbia Hockey League (BCHL) after previously suiting up in a handful of games with the Muskegon Lumberjacks of the USHL. With the Smoke Eaters last season, Strobel predominantly found himself on the left wing of the team’s second line, posting 25 total points (10G, 15A) in 52 games played.

Before the BCHL, Strobel spent the 2020-21 season with the Waterloo Black Hawks, tallying five points and fifteen penalty minutes in 19 games. Strobel played high school hockey with the Hill-Murray Pioneers, with his three-year career coming to the perfect conclusion with the 2020 Class AA State Tournament title. As the team’s senior captain and leader, Strobel notched at least one goal per game in the state tournament while totaling 14 points (8G, 6A) in six playoff games and 54 regular-season points (27G, 27A), ending his senior season with a point-per-game average of 1.84.

Following his state tournament win, it took Strobel only a few short days to announce his verbal commitment to play for the Gophers, an announcement that surprised some with his dad and uncle both playing hockey for the Wisconsin Badgers. It is safe to say that he made the right decision.

Our first goalie in this “Incomers” series is Zach Wiese, who graduated from Owatonna High School in 2020 after playing three seasons with the Huskies. In that three-year span, Wiese played in 54 games, ending with a goals-against average of 2.54, a save percentage of 0.911, and a record of 31-20-3.

After high school, Wiese has played for the Rochester Grizzlies in the North American 3 Hockey League (NA3HL) for the last two seasons. Wiese posted excellent numbers in those two seasons, ending with a GAA of 1.80, SV% of 0.944, and eight shutouts in 51 games played. This strong play in goal helped the Grizzlies win their first-ever championship in 2021-22 and resulted in Wiese being named the NA3HL Goalie of the Year and placed on the All-NA3HL First Team.

Wiese will look to replicate the college career of No. 1 goaltender, Justen Close, moving up in the ranks from third on the depth chart to the team’s starting goaltender. 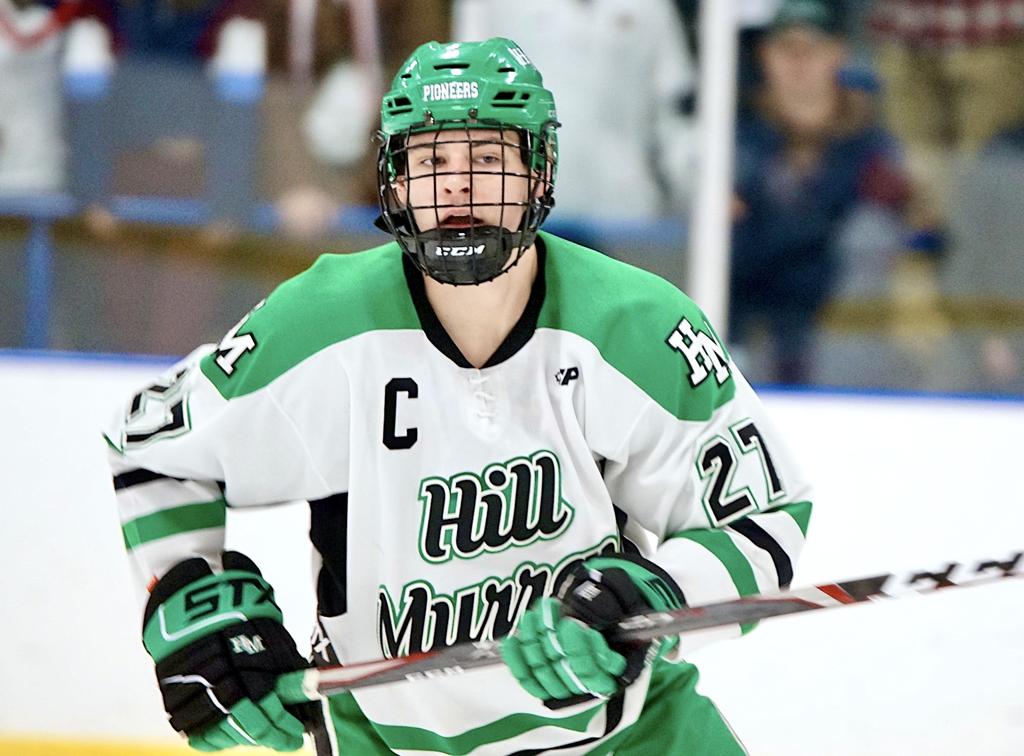 A native of Mahtomedi, defenseman Ryan Chesley, is our first “Incomer” to join the Division I ranks after playing for the U.S. National Team Development Program. In his first season with the NTDP, Chesley played 37 games with the Under-17 team, tallying 34 points (11G, 23A) in 37 games, before being promoted to the U18 team, which is no small feat for an underager. After his promotion, Chesley played in 71 total games with the U18 team, posting 31 points (13G, 18A) and a plus/minus of plus-43.

Before the NTDP, Chesley attended Shattuck St. Mary’s and, over three seasons of prep hockey, notched 82 points (23G, 59A) in 123 games.

After being placed No. 18 on Central Scouting’s Final North American Skater ranking for the 2022 NHL Draft, Chesley was selected early in the second round by the Washington Capitals, with the thirty-seventh overall pick.

With Chesley’s strength, all-around skillset, and strong two-way play, he’ll look to step right in and have an immediate impact on the Gopher’s blue line.

Our tenth and final “Incomer” to the Minnesota Gophers is forward Jimmy Snuggerud, a Chaska native and recent teammate of Ryan Chesley’s with the National Team Development Program. Before joining the NTDP, Snuggerud played one season of high school hockey, where he led the Chaska in points as a freshman, tallying 41 total points (20G, 21A) in 26 games for a point-per-game average of 1.6.

Snuggerud had a solid first season with the U17 team, posting 32 points (15G, 17A) in 45 games, before having a breakout second season with the U18 team, where he posted 63 points (24G, 39A) in 59 games, placing him tied for sixth on the team in points. Snuggerud consistently found himself on the team’s top line alongside center and fellow freshman Logan Cooley, a chemistry Coach Motzko may look to reignite this season.

With a No. 11 ranking on the Central Scouting’s Final North American Skater list for the 2022 NHL Draft, Snuggerud had his name called at pick No. 23 of the first round by the St. Louis Blues. 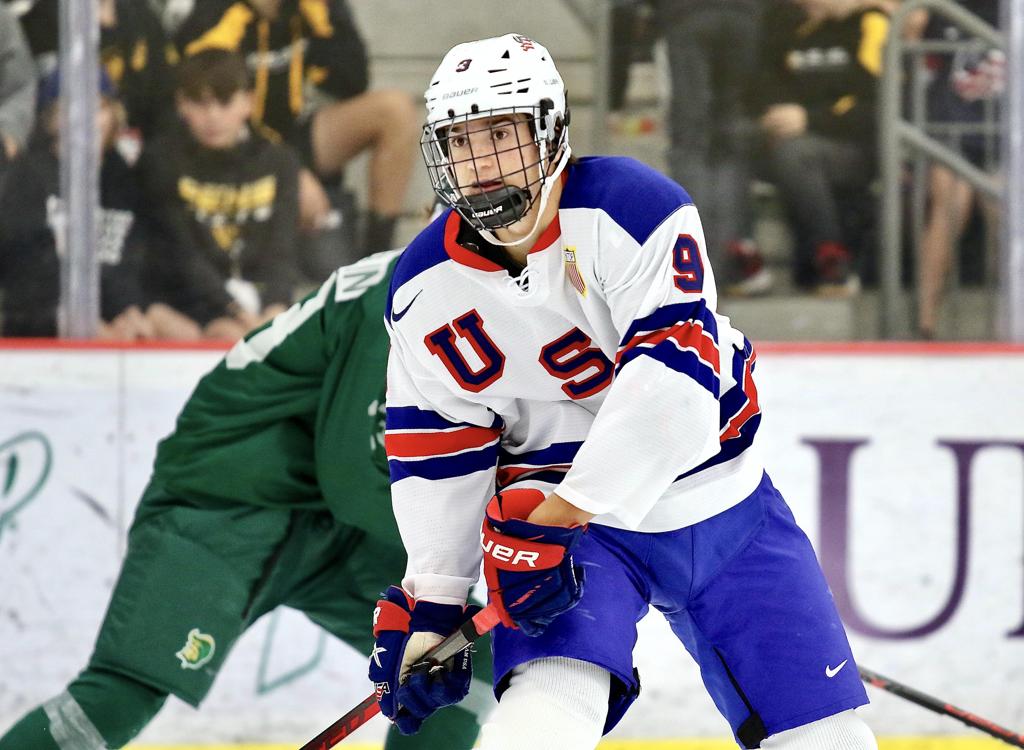 Jimmy Snuggerud will wear No. 81 for the Golden Gophers this season. His father, Dave, wore No. 18 when he donned the maroon-and-gold in the mid-1980s.