We will start our trio of incoming Bulldogs with Jack Smith, a forward from St. Cloud who most recently played for the Sioux Falls Stampede of the USHL after previously playing high school hockey for St. Cloud Cathedral.

Last season, Smith dealt with injuries that resulted in him dressing in only 10 games for a two-season total of 57 games played, with 16 points (9G, 7A) and 66 penalty minutes tallied in his USHL play. In all three seasons of Class A high school hockey with the Crusaders, Smith consistently played an integral role in the team’s success, finishing each season near the top of the team’s stats leaderboard with dominant postseason play. In that span, Smith totaled 176 points (80G, 96A) in 76 total games for a point-per-game average of 2.32.

Reaching the state tournament in his last two high school seasons, Smith helped the Crusaders win their first-ever state title in the 2018-19 season and then capped off his senior year with the third-place trophy. In those final 12 postseason games alone, Smith averaged 3 PPG with 18 goals and 18 assists, the most on the team.

Smith was selected in the 2020 NHL draft by the Montreal Canadiens with pick No. 102 of the fourth round. 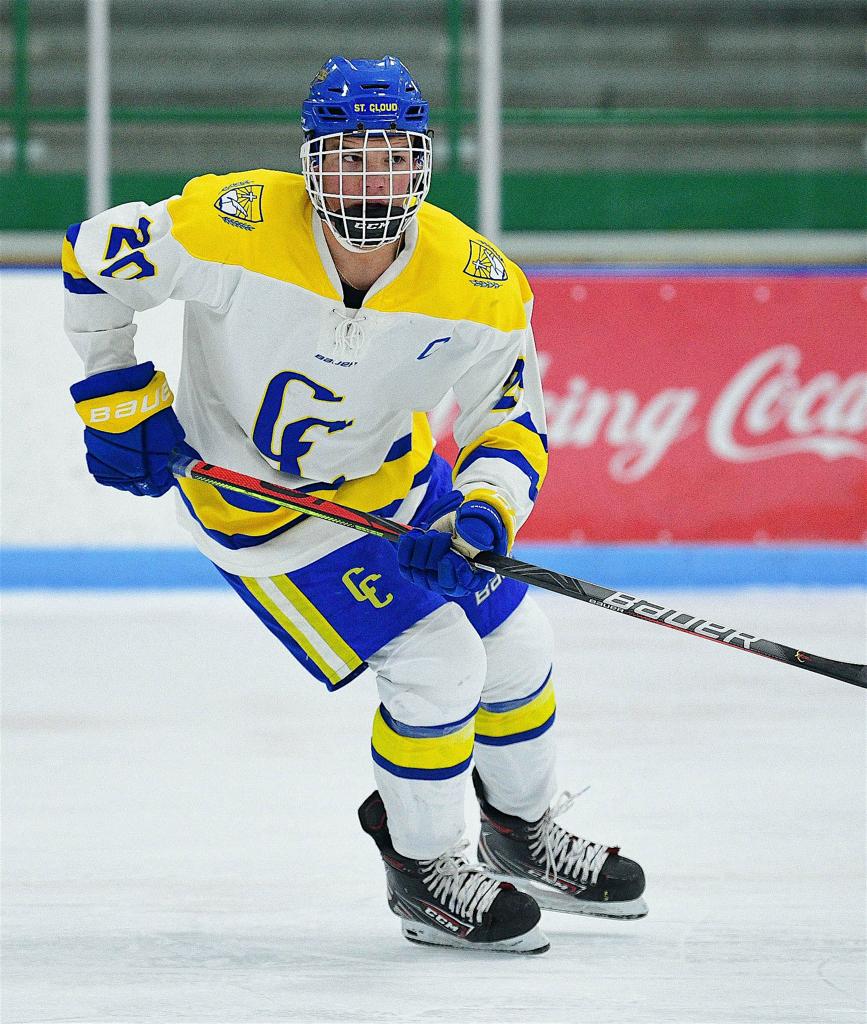 Next up is defenseman Joey Pierce, who continues the traditional pathway of Hermantown Hawks players moving on to play Division 1 hockey at the University of Minnesota Duluth.

Originally a native of Ely, Pierce and his family moved to Hermantown after Pierce finished eighth grade, a season in which he played varsity hockey for the Timberwolves and finished second on the team in total points, tallying 14 goals and 20 assists.

After a year of bantam hockey with Hermantown, Pierce went on to have three outstanding varsity seasons with the Hawks, showcasing his versatility by playing forward as a sophomore before moving back to his natural position as a junior and senior. As a sophomore, Pierce consistently found himself on the same line as current teammate and Mr. Hockey winner, Blake Biondi, finishing the season with 40 points (18G, 22A). Pierce ended his three-year high school career with the Hawks with a total of 116 points scored (43G, 73A) for a point-per-game average of 1.57.

Pierce joined the Minnesota Wilderness of the NAHL once his high school senior season ended, suiting up in 24 games before moving on to the USHL this past season, where he played for the Lincoln Stars. With the Stars, Pierce put up 15 points (2G, 13A) and 73 penalty minutes in 64 games played.

After losing an overtime thriller in the state championship game as a junior and not being able to dress due to COVID-19 protocols as a senior, Pierce will look to exorcise his Xcel Energy Center demons come this March at the NCHC Frozen Faceoff. 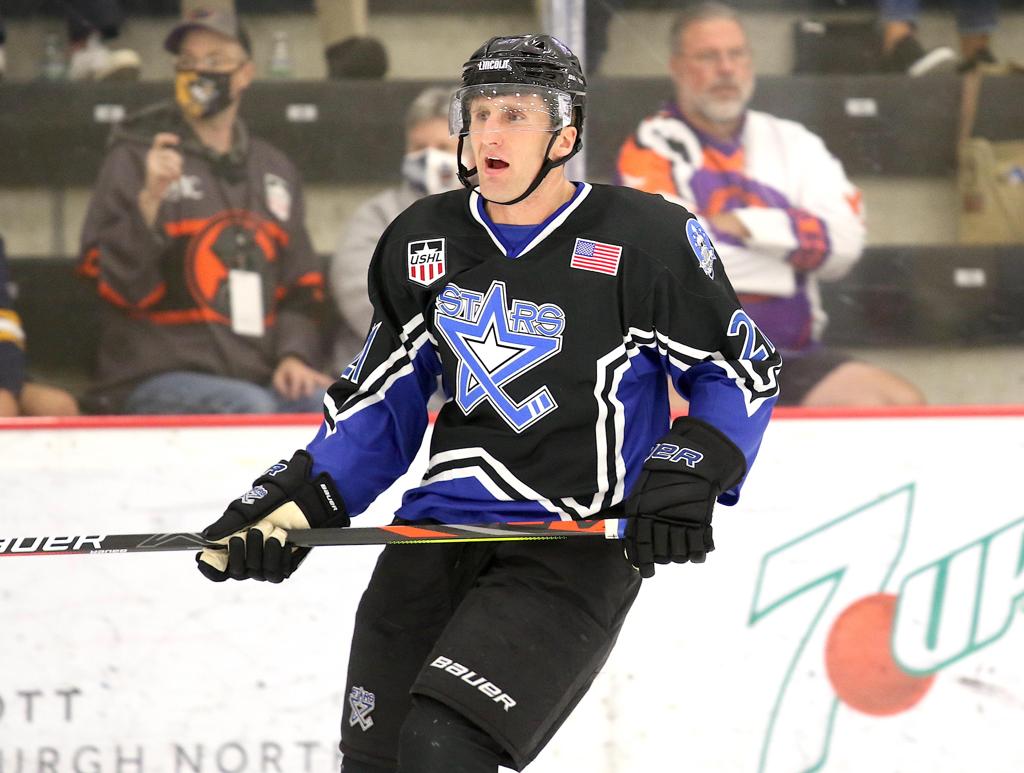 In his three years of Class AA varsity play, Johnson suited up in 72 games and tallied 91 total points (33G, 58A) for a point-per-game average of 1.26. As a senior during the 2019-20 season, Johnson led his team with 48 regular season points (17G, 31A), placing him tied for 20th in the state for all AA players that year. After high school, Johnson played one season in the NAHL with the Lone Star Brahmas before becoming Joey Pierce’s teammate with the Lincoln Stars last season.

In his one season playing hockey in Texas with the Brahmas, Johnson appeared in 41 games and recorded 33 points (15G, 18A), finishing fourth on the team in points as a rookie. Making the jump to the USHL, Johnson was a middle-six forward for the Stars last season, predominantly playing on the right wing.

In 64 USHL games played, Johnson recorded 34 points (15G, 19A), putting him in eighth place on the team. After continuing to elevate his play throughout the USHL season, Johnson was a late commit to the UMD Bulldogs, announcing his commitment and signing his National Letter of Intent just this past April 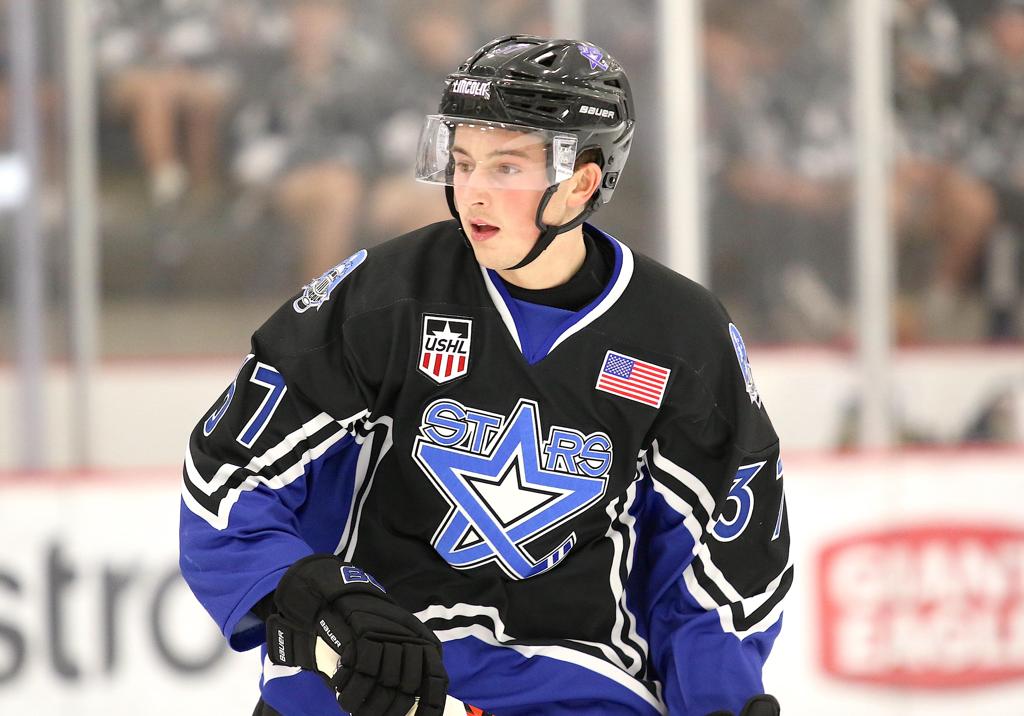 Luke Johnson skated in 64 USHL games before arriving on campus at Minnesota Duluth.