Game one saw no scoring in the first period, with Notre Dame's goalie, Ryan Bischel, saving a Jimmy Snuggerud penalty shot. In the second, the Gophers jumped out to a 1-0 lead thanks to a beautiful set-up from Jaxon Nelson to Mason Nevers. Later in the period with Notre Dame on the power play, Matthew Knies found himself on a breakaway where he scored shorthanded.

Up 2-0 in the third, Jimmy Snuggerud was able to make up for his missed opportunity earlier in the game, scoring back-to-back goals with the primary assists on both goals going to Matthew Knies. Notre Dame's Justin Janicke, a Maple Grove native, spoiled the Gophers shutout late in the game, leading to a 4-1 final. Justen Close saved 23 of 24 shots for the Gophers, earning his fifth win of the season.

The first period of Saturday's game was an uneventful one, with no goals scored. Halfway through the second period, Jaxon Nelson collected a Bryce Brodzinski pass in the slot and scored to make it 1-0. A few minutes later, the Gophers doubled their lead on the power play, with Matthew Knies finishing the puck after it squeaked through goaltender Ryan Bischel. That score held until late in the third when Logan Cooley added an empty net goal to make it 3-0, and this time, the Gophers helped Justen Close hold on to his second shutout of the season.

The Gophers will again be at home this week, as they square off against Penn State for a two-game series, with games on Thursday and Friday at 7:00 PM CT. 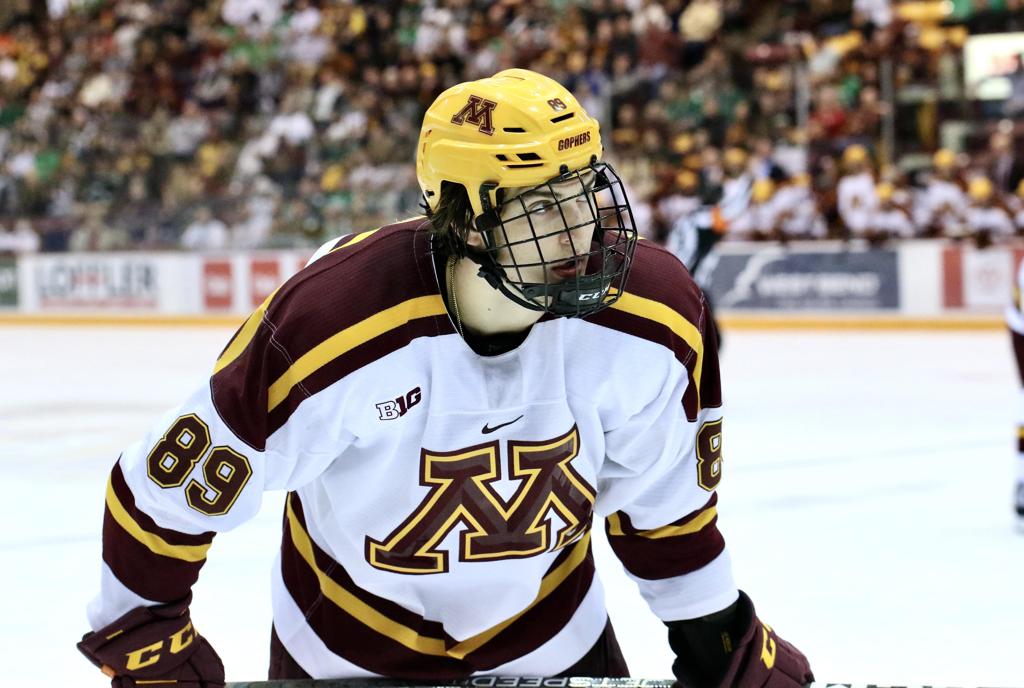 The one intrastate matchup that took place over the weekend was between two CCHA teams; the No. 6 ranked Mankato State Mavericks (5-3) and the University of St. Thomas Tommies (2-6).

Game one at the St. Thomas Ice Arena in Mendota Heights saw the Mavericks jump out to a two-goal lead less than halfway through the first, with goals by Brendan Furry and Christian Fitzgerald. However, back-to-back goals by Benilde-St. Margaret's grad, Cooper Gay, a shorthanded goal in the first and even-strength goal in the second, tied the game at 2-2.

With the score still knotted up at two to start the third, the Mavericks came out flying and did not look back, knocking five goals past Tommie goaltender, Aaron Trotter, to come out with a 7-2 win. Alex Tracy secured the win in goal for the Mavericks, giving him a 4-1 record so far this season.

Night two in Mankato saw the Tommies jump out to an early 1-0 lead through a Jake Braccini wrist shot before the Mavericks scored three unanswered goals, with all three goals scored by David Silye for the natural hat trick. Those three tallies added to the two the night prior place Silye at the top of the team's goals (8) and points (11) leaderboard. As the first period came to a raucous close, UST's Luke Manning scored with less than two minutes remaining to make it 3-2.

After a scoreless second, Lucas Sowder of Mankato scored his first goal of the season to make it 4-2 only a minute into the third. The Tommies continued to fight and made it 4-3 via a Luc Laylin goal with roughly eight minutes remaining, but that would be their final tally, with the Mavericks holding on for the win and series sweep. Mankato will be off next weekend before hosting Northern Michigan the following weekend, Nov. 18-19, with St. Thomas traveling to Bowling Green next weekend to take on the Falcons. 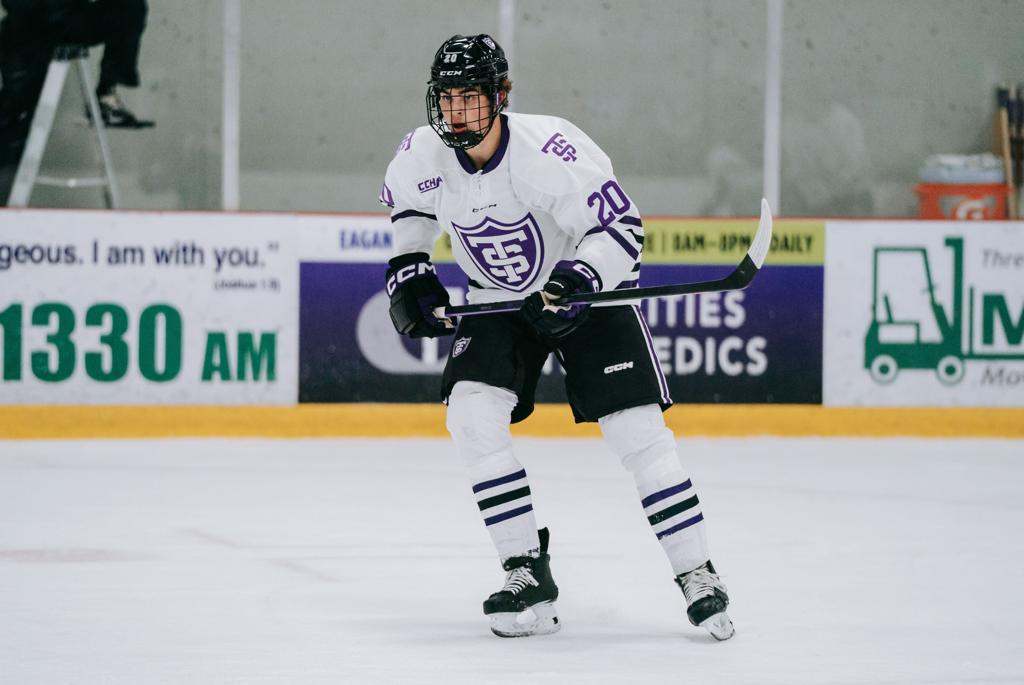 Ranked No. 20 in the USCHO poll heading into the weekend, the Bemidji State Beavers (3-2-1) hosted the Ferris State Bulldogs (3-4-1) for a two-game series.

Friday night saw the Bulldogs score first at the 15:45 minute mark of the first period on the power play, but the Beavers answered almost immediately, with Ross Armour scoring to tie the game at one. A few minutes into the second, freshman Kirklan Irey scored off a rebound to tally his first collegiate goal and put the Beavers up 2-1. The Bulldogs then added another power-play goal, with Austin McCarthy scoring in close to make it 2-2.

That ended up being the final goal scored in regulation and overtime, with Ferris State earning the extra point in the CCHA standings by winning the shootout. Ferris State goaltender, Logan Stein, had a great game in goal, saving 39 of 41 shots faced for a .951 save percentage.

Unlike the night before, game two saw the Beavers score first, with Alexander Lundman rifling the puck home from the slot. The game was a low-scoring affair, and that 1-0 lead held until the early minutes of the third period, where the Bulldogs tied the game at 1-1 through a Bradley Marek goal. Ending regulation still knotted up at one, the Beavers were not going to let the points slip away for the second night in a row, with Ross Armour scoring thirty seconds into OT to earn the win.

That win earned the Beavers three total CCHA points on the weekend, with next weekend involving more inner conference play, with a trip to Northern Michigan.

The No. 4 ranked St. Cloud State Huskies (7-1) made the trip to Denver, CO, for a two-game tilt against the No. 2 ranked Denver University Pioneers (6-2).

The first period saw scoring from both teams, with Jami Krannila putting the Huskies up 1-0 before Mike Benning answered late in the period. In the second, Justin Lee utilized a screen in front to sneak one in and put the Pioneers up 2-1. Halfway through the third period current Huskies points leader Grant Cruikshank, drill home a Dylan Anhorn feed to retie the score. Late in regulation, Massimo Rizzo put the Pioneers back in front, marking his sixteenth point in only nine games played this season. But the Huskies responded, with Zach Okabe scoring less than a minute later with their goalie pulled, tying the game at 3-3.

In the 3-on-3 overtime, Grant Cruikshank dropped the puck to Veeti Miettinen, who fired it home for a Huskies victory. That win improves the St. Cloud State one-goal games record to 4-0 and 7-1 when scoring the first goal this season.

The rematch Saturday night saw the Pioneers come out firing, with back-to-back early goals, scoring first through Edina native Casey Dornbach and then next from Jack Devine. Still up 2-0 in the second period, the Huskies pulled one back, with Jami Krannila scoring on the power play off a Jack Peart feed.

In the third, the Pioneers built on their lead, making it 3-1 on the power play through a goal from fifth-year defenseman Kyle Mayhew. The Huskies then made it 3-2 at the 9:10 minute mark, with Grant Cruikshank scoring to continue his excellent run of form. On consecutive nights, St. Cloud could not score with an extra attacker after pulling the goaltender and fell to the Pioneers 3-2.

Now 8-2, the Huskies will return home and face off against Western Michigan this coming weekend for a two-game series.

After their 4-4 start to the season, the University of Minnesota-Duluth Bulldogs dropped down to No. 19 in the rankings before their two-game battle against Colorado College (3-5) in Colorado Springs last weekend.

Friday night's game did not go as planned for the Bulldogs, with the Tigers scoring four straight goals in the first period. Colorado College saw goals scored by Hunter McKown, two from Stanley Cooley, and the fourth goal by Noah Laba. The second period saw more of the same as the prior period, with Noah Laba scoring again to make it 5-0. That goal for freshman Laba makes him co-leader for total points scored on the Tigers, with 10 in 10 games played. There was no scoring in the third period, resulting in a 5-0 victory and 34-save shutout for freshman goaltender Kaiden Mbereko, his first collegiate shutout and second win in goal.

In game two, the Tigers got on the board first, with Bryan Yoon scoring a power-play goal at the 7:51 minute mark of the first period. With the score still sitting at 1-0 in the second, the Bulldogs scored their first goal of the series, with Ben Steeves scoring on the power play off a feed from Owen Gallatin. That 1-1 score held until late in the third period when the Bulldogs took the 2-1 lead off an Owen Gallatin goal with less than two minutes remaining. Blake Biondi added an empty net goal to seal the win and secure the series split. Senior Matthew Thiessen earned the win in net for the Bulldogs, saving 18 of 19 shots faced.

This coming weekend, the Bulldogs will return home to take on the University of Nebraska-Omaha Mavericks. 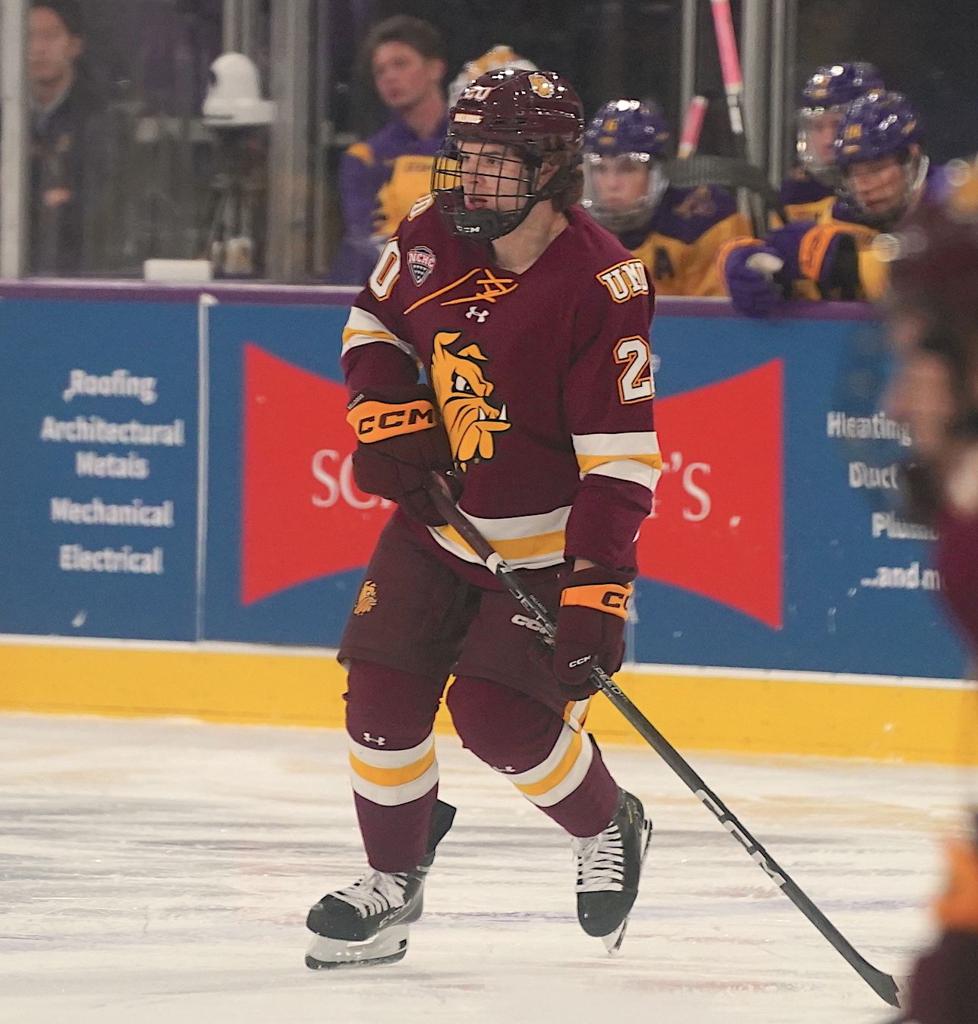 In Saturday's win over Colorado College, Minnesota Duluth's Owen Gallatin assisted on the game-tying goal, then notched the eventual game-winner.