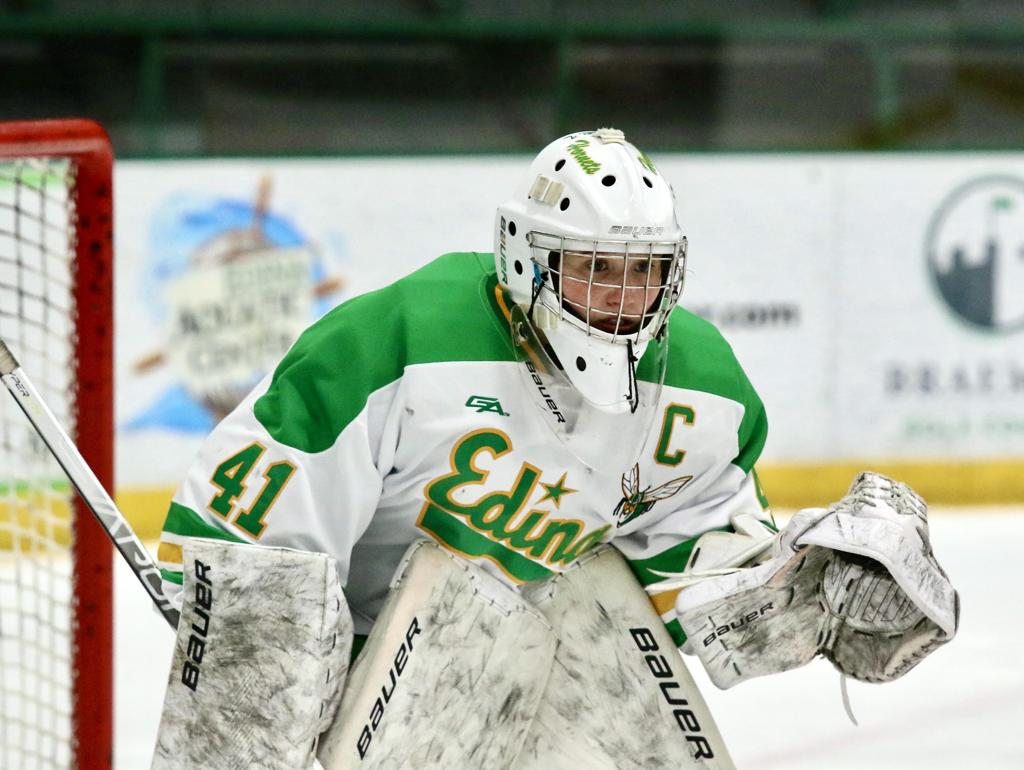 Uma Corniea stopped 80 of 82 shots for Edina last week, helping the Hornets move up to No. 2 in Class 2A.

Boy howdy, is that win over Andover carrying the Stars right now.

Gentry topped Moose Lake Area and Hastings by a combined score of 17-0, and reading further into the box scores (nonexistent for the Hastings contest) doesn’t offer any real idea of who this Stars team is or what their ceiling could be.

For now, the win over then-No. 1 Andover (and some help from the teams below them) pushes them to the top.

Before the nine Minnesotans left their respective high schools for the IIHF Under-18 Women’s World Championships, I decided to judge teams based on how they fared, not on how many players they may or may not have had on hand.

In any case, the Hornets peeled off three straight wins last week, beating Lake Conference opponents North Wright County and Eden Prairie before the win over the Skippers.

Goaltender Uma Corniea stopped 80 of 82 shots in the trio of victories.

If we factor in that Andover was missing defender Cailin Mumm from the Huskies’ loss to the Pioneers, then we also have to consider that Hill-Murray was missing its captain, best defender, and a possible Ms. Hockey finalist Ellah Hause.

Even without Hause, the Pioneers topped No. 2-1A Simley 3-2 in overtime, then handed previous No. 2-2A Andover its second loss of the season.

Grace Zhan has been the difference so far, so even if you’re tired of seeing her mentioned in these rankings, get over it. The Dartmouth commit stopped 31 of 32 shots in the win over Andover.

A 10-2 win over Wayzata was followed by the aforementioned loss to Edina, but the Skippers can take heart in the return of four skaters and a goaltender from Team USA.

Eden Prairie and Champlin Park/Coon Rapids are on the docket for this week, as the Skippers face the Eagles Tuesday and the Bluebirds Saturday.

Like Minnetonka, Andover takes its leave from the top three and slides in at No. 5-2A this week.

Surprising? Sure. Cause for panic and intense questioning of life as we know it? Nope.

Losing to Hill-Murray 2-1 gives the Huskies three losses by a single goal this season, and a record of 3-2 in one-goal contests.

Wins over Delano/Rockford and Wayzata don’t exactly rattle the chain, but a 5-1 victory over consistent top-six squad Maple Grove was a statement win for the Fire.

Sophomore Josie Linn and senior Sacred Heart commit Grayson Limke combined for eight goals and 14 points in last week’s wins, as the Fire topped the Tigers, Trojans, and Crimson by a combined score of 20-2.

Before we pile on the Crimson for allowing five goals in a game (something it hadn’t done since Jan. 28, 2022, against Andover), let’s consider the facts.

Maple Grove has four losses on the season. Three of those four losses have been by a single goal against Edina, Minnetonka, and Andover. Those three squads haven’t dipped out of the top five all season.

We’ll call the loss to the Fire a byproduct of a strong schedule and let Maple Grove get on with its Northwest Suburban Conference slate.

Of course, Mounds View/Irondale and Park of Cottage Grove aren’t murderers’ row, but the Ponies can’t be held accountable for the overall strength of the rest of the Suburban East Conference.

The Ponies will get Josie St. Martin back from her European tour this week. Despite missing three games, St. Martin still paces the team in goals, assists, and points.

The Spuds rattled off three wins last week, and allowed just one goal in each of those wins against Alexandria, Sartell/Sauk Rapids, and North Wright County.

East Grand Forks, Roseau, and Warroad are lined up for this week, and with Andover and a second date with Warroad on the horizon, 20 wins may be too much to ask from the Spuds.

The Red Knights continued their tour of the Class 1A top-five, tying Orono before defeating Holy Angels and Eden Prairie.

According to the MN Girls’ Hockey Hub, Mia Rooney has apparently taken over as the starting goaltender for the Red Knights. Rooney has played the last five games for BSM, posting a record of 4-0-1, but only faced 68 shots in that stretch. 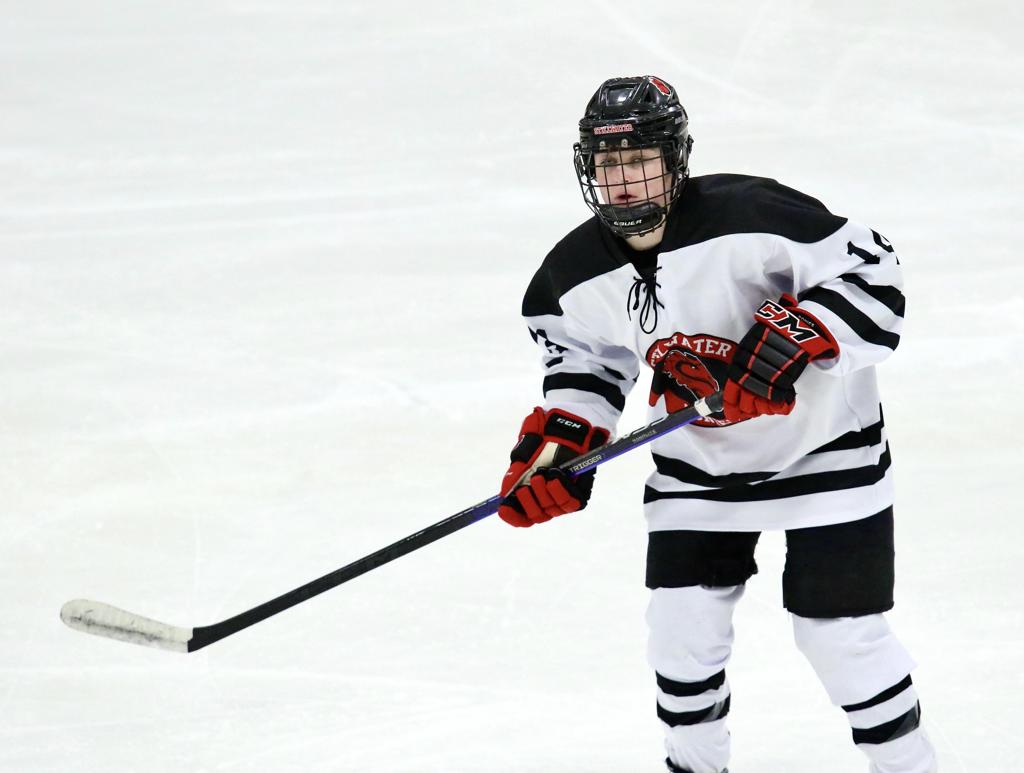 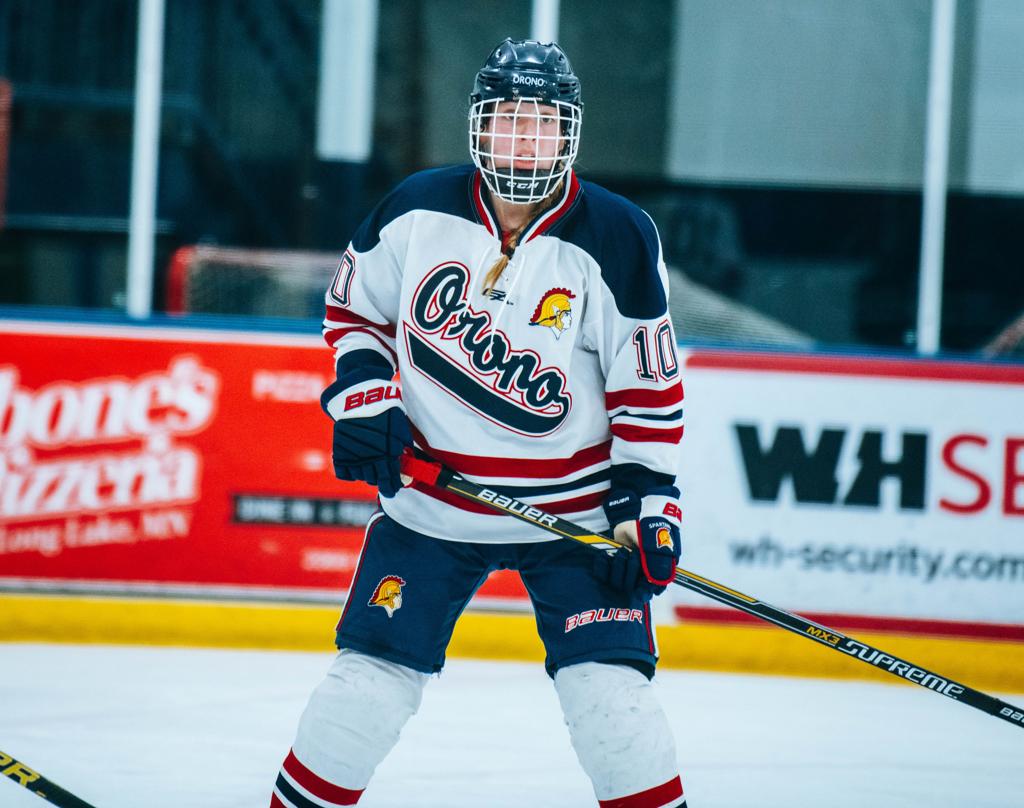 Zoe Lopez was the lone goal-scorer in Orono's 1-0 win over Chaska/Chanhassen last week.

Three games, three wins, and the Warriors should be given an award for longest drive to the shortest game. The Warroad bus made its way 480 miles south for a tilt with perennial Class 1A State Tournament participant Luverne, scored five times in the first period, then played the entire third frame in running time in the 10-0 victory.

Ranking Simley at No. 4 over Holy Angels and Proctor/Hermantown makes me feel like a small child who throws rocks at a window just to see what would happen if I hit it.

The Spartans bump up thanks in part to an overtime loss against No. 3-2A Hill-Murray, proving that the Spartans are one of the most dangerous teams in the state.

Simley's 91 goals this season rank fourth among all teams.

A cancellation against Hibbing/Chisholm was the only way Proctor/Hermantown could be kept from picking up three wins last week, with the Mirage topping Chisago Lakes 3-1 and Breck 4-0.

The Mirage will take on No. 1-2A Gentry Academy on Tuesday and No. 2-2A Edina on Thursday this week.

Wins over New Prague and Minneapolis can't take the sting out of a loss to No. 10-2A Benilde-St. Margaret's, a game that saw the Stars give up two goals in the second period and two more in the third after taking a 1-0 lead in the opening stanza.

Only one heavyweight remains on the Stars' schedule, with a game against No. 3-2A Hill-Murray on deck for Jan. 31.

The Spartans ran into an electric fence last week in a 1-0 win over Chaska/Chanhassen, as Stormhawk goaltender Madeleine Margraf stopped 50 of 51 shots. Zoe Lopez scored what turned out to be the game-winner for the Spartans, her fifth game-winner of the season.

As for Margraf, why an electric fence and not a brick wall? Because you can't see an electric fence, and Margraf has flown very far under the radar for the Stormhawks this season. Upon further review, Margraf has faced the seventh-most shots on goal this season (637), and the second-highest save percentage among goalies who have faced at least 600 shots (.915).

Orono has gone 4-0-2 in its last six games, and only has Blake on the schedule this week, a Saturday afternoon tilt. 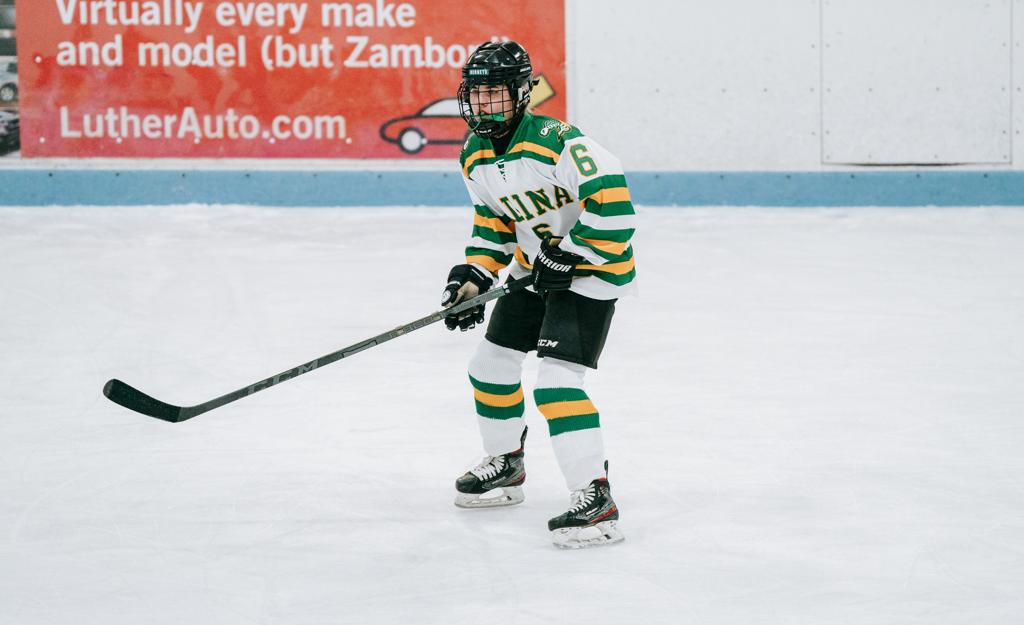 A huge weekend for Stillwater Red. The Ponies win the Duluth Icebreakers in convincing fashion. They beat three top-10 teams (Edina, AV/BV/EV and OMG) to shoot up the rankings from #5 to #1.

The rest of the top-10 had a rough week/weekend. Several teams with two losses on the week. Ponies move way up, most everyone stays the same. 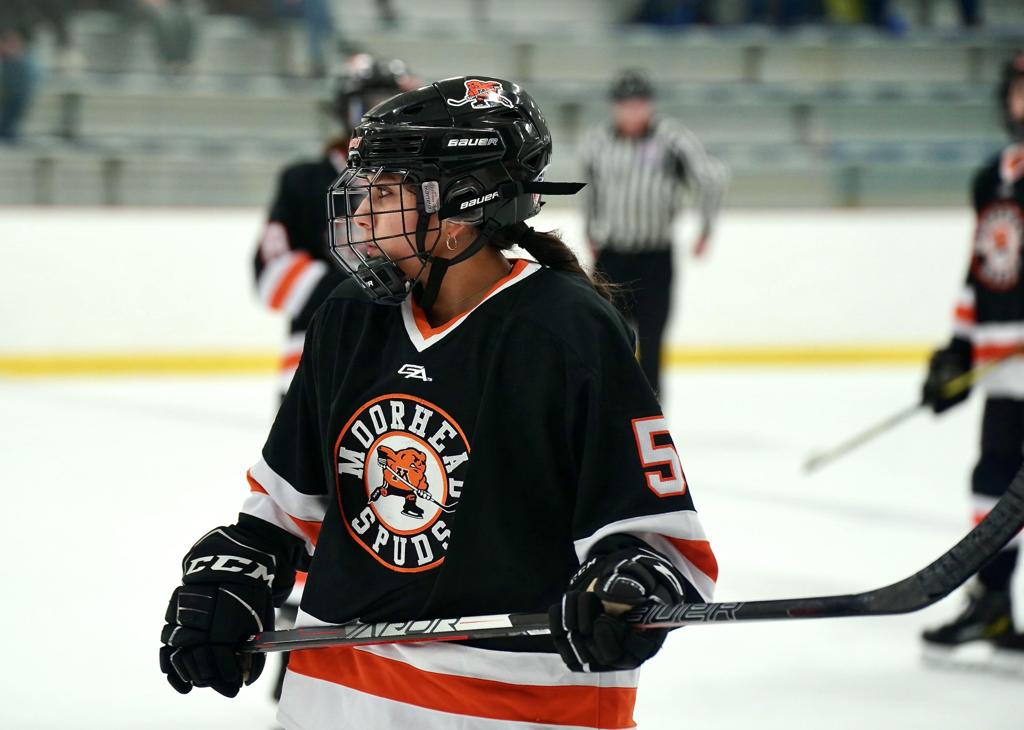 There is only one change this week in U15B, as not many games were played. North Wright County, the previous No. 10, was defeated by Coon Rapids-Champlin Park, moving the Bluebirds into the top-10.

The Bluebirds are unbeaten in four of their last five games, with the lone loss coming against Buffalo on Jan. 13. 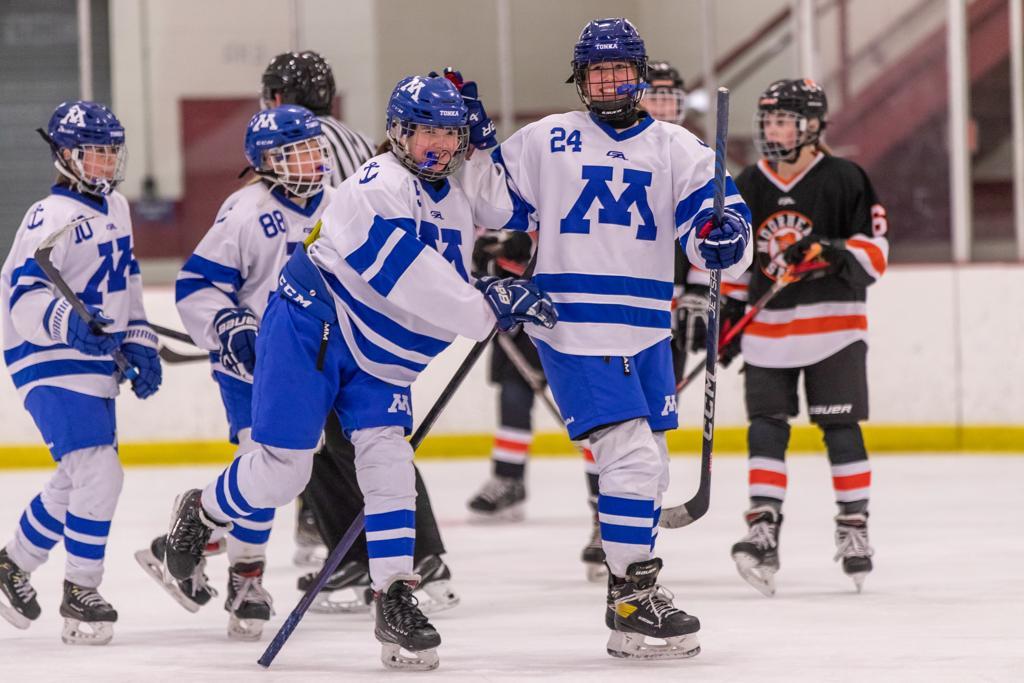 Tonka had a lot to smile about last weekend in Duluth

Big weekend in Duluth for the top two teams in the state. Minnetonka gets the win over #1 Woodbury in a shootout to take the Duluth Icebreakers.  Skippers now hold down the top spot in the state.

The rest of the top-10 had very good week...very little movement. 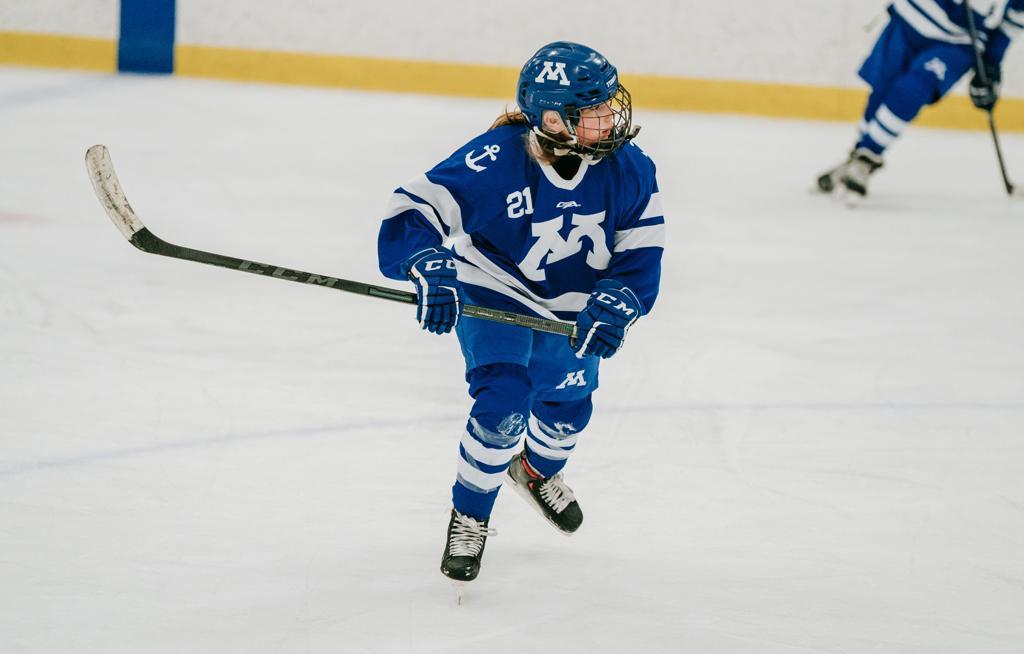 Fergus Falls is up to No. 2 this week, and the Otters are a dominant team, outscoring their opponents 218-51 thus far.

Woodbury Black had a huge week as the Predators defeated No. 3 Wayzata Blue last week. The Predators took home top honors in the St. Luke's Icebreaker Invitational, thumping Hopkins 7-0 in the 12B championship game.

Minnesota River swept the previous No. 5 River Lakes this week, and the Bulldogs are now ranked No. 7. Rock Ridge has jumped to No. 8 in the rankings this week, with a huge victory over previous No. 7 Two Harbors/Silver Bay. 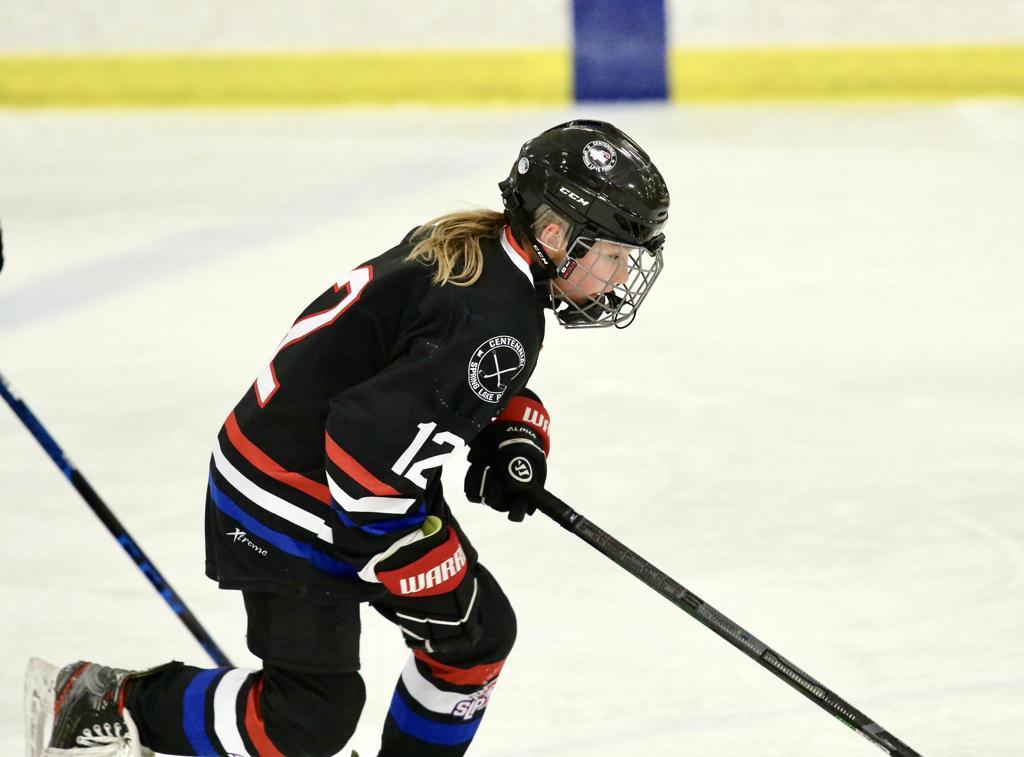 A lot of movement this week in 10A. Anoka-Rogers is holding on to #1 by a thread. Roseville-MAHT wins the prestigious Duluth St. Luke's last weekend with four impressive wins.

Tonka jumps into the top-10 - District 6 has a slew of good teams to match up with District 10 deep talent pool. 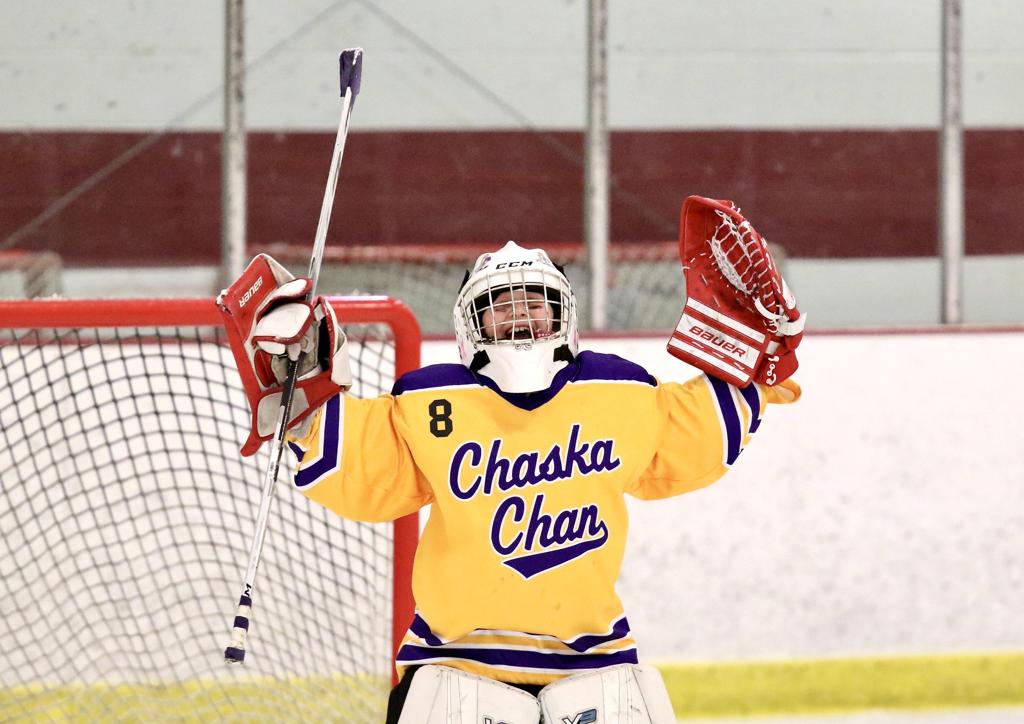 Hopkins/Park is the new No. 1 team in U10B, the Royals are undefeated and have only given up 10 goals in 16 games played.

Elk River drops a couple of games this week, but a good result for them was beating previous No. 2, Roseville/Mahtomedi Silver 4-3 in OT.

Chaska/Chanhassen rockets up the rankings this week to No. 4, winning the St. Luke's Icebreaker in Duluth. The Stormhawks didn't allow a goal in the tourney, beating Icebreakers Red 10-0, Stillwater 1-0, and Edina Green 3-0.

Shakopee and Centennial/Spring Lake Park Black are both new in the rankings this week at No. 9 and No. 10, respectively.