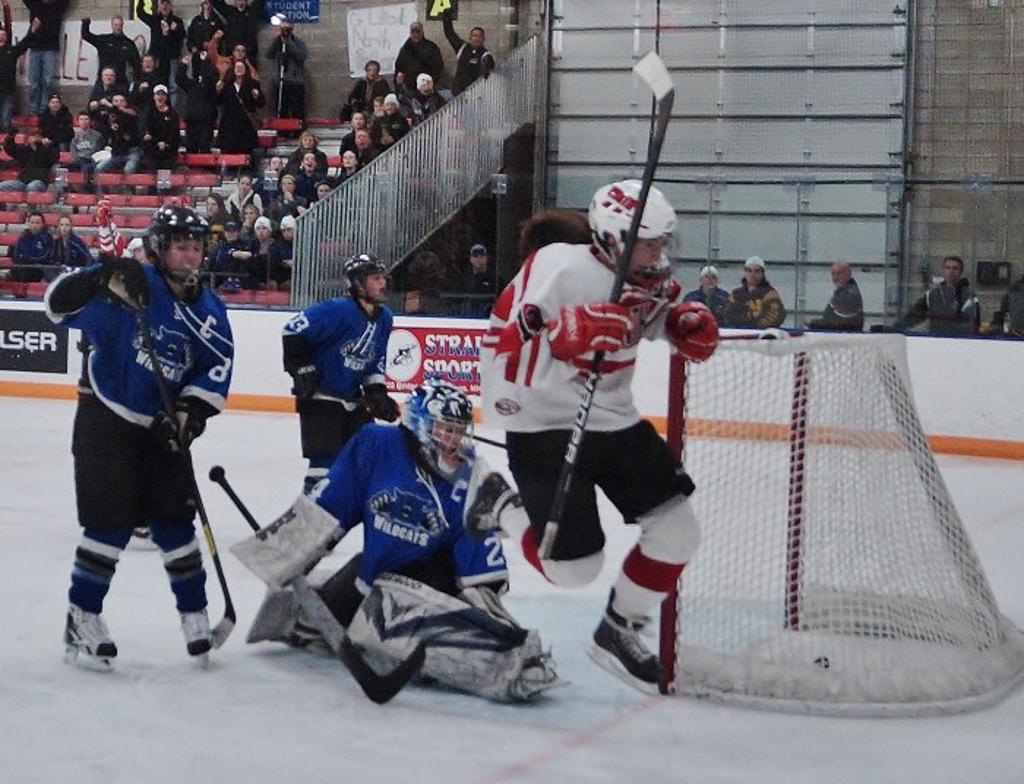 Thursday night in Owatonna, the #1 seeded 1AA Lakeville North Panthers beat the #3 seeded Dodge County Wildcats 3-2 in an intense game played at the Four Seasons Arena in front of ribald Dodge County fans. The Wildcat followers filled their side of the arena and with the help of the Lakeville North band, drew the North fans into cheer frenzy for both teams as the game entered the third period.

The Dodge County team came out of the locker room and played the first period with great defense and poise.  They simply kept the high powered Panthers off stride and to the outside of the defensive area and moved the puck quickly out of their zone.  Each North attempt to attack was turned aside.

The Wildcat’s first period rushes most slashing attempts at scoring usually with the wing trying to create something once inside the North blue line.  It resulted in shots on goal (Dodge County outshot North 10-4 in the first period), but not good shots.  The game was an “up and down the ice game” with little organized offensive by either team.

With 12 minutes left in the opening period, North drew a checking penalty.  Dodge County never got their power play going.  Their difficulty stemmed from the Panther defense down low in the slot or crease area.  The Panther defense just bodied the Wildcat forwards off the play.  That would eventually cost the Wildcats the game.

The Panthers killed the checking penalty and two minutes later, killed an interference penalty helped by Dodge County drawing their first penalty.  Neither team could score on the power play.

With three minutes left in the period, Dodge County’s passing game kicked in.  They had a nice three pass play that covered three quarters of the ice and ended with a great close in shot, but North’s senior goalie Cassie Alexander made the big save.

A minute later, the Wildcats’ passing led to a breakaway and a hooking penalty on the Panthers.  This time, Dodge kept the pressure on the Lakeville net.  Thirty seconds into the power play they scored.  The Wildcat’s Emily Gunderson put Dodge’s third rebound shot into the upper right side of the Panthers’ net from the top of the crease.  Wildcats led 1-0.  Darby Dodds got the assist.  It was a power play goal.

The first period ended with the Wildcats leading 1-0.

The second period opened with Dodge County on the attack.  The Wildcats’ pressure eventually led to a Panther interference penalty.  Again, the Panthers easily killed Dodge County’s power play, holding the Wildcats outside the Panther zone by playing a box in neutral ice.  The Wildcats could not break out of the neutral ice into the Panther zone by passing.  When they dumped the puck into a corner, Lakeville defenders would skate it down and send the puck back into the Wildcats’ zone.

A second Lakeville North penalty for slashing at the 10 minute mark led to Dodge’s second goal.  On the power play, the Dodge forwards turned the puck trying to be cleared out of a Lakeville corner.  The puck ended up on the stick of a Wildcat in the right slot who put a hard shot on the Lakeville goalie.  Alexander could not control the rebound.  The puck hopped left to the weak open side of the net to Emily Gunderson.  She got enough stick on the goal to send it sliding by Alexander as Alexis Joyce dove trying to bat the puck out of the crease.  The Wildcats led 2-0 with the game half over.

The Panthers came back on the ensuing face off with their top line.  They attacked the Dodge defense and caught them relaxed.  The Panthers’ Taylor Flaherty skated the puck down the center of the Dodge County zone and scored unassisted to cut the Wildcat lead to 2-1.  In forty seconds, Flaherty had turned the game around.

The Wildcats were back on the defensive.  Flaherty’s goal was the only full strength goal scored Thursday night.

The game slowed for the remainder of the period.  The Dodge County defense was beginning to tire.

Lakeville North was beginning to get the edge in the Wildcat’s zone.  Dodge defenders were starting to dump the puck.  The play became ragged caused by numerous game stoppages.

Still, the Wildcats took a 2-1 lead into the third period.

The Dodge defense was doing their job.

Then the Wildcats tired.

Dodge County started to dump the puck or to accept the tie-ups in their zone rather than fighting through them.  It led to a Wildcat penalty at the 9 minute mark.

One minute into the power play, Lakeville North’s wing got open on the right side and fed a great pass to a breaking Megan Skelly.  Skelly, reaching with her stick got the shot off over the outstretched leg of the Wildcats’ goalie to put the puck into the net.  Realizing she had scored the tying goal, Skelly leaped wildly in celebration.

It was a great play.  Maddie McGlade and Alexis Joyce got the assists.

At the 7 minute mark, the Wildcats got their chance to win the game.  A North interfence penalty created a Wildcat power play.  Forty seconds later, a North hooking penalty created a 5 on 3 power play.  Through the three minute power play, the Wildcats never got organized.  They had some rushes that resulted in shot on goal, but Alexander stood her ground.  She played with remarkable calm in the middle of the shouting fans and tense drama.

Lakeville killed the penalties and with 3 minutes to go in the third period, they got the power play on a Wildcat interference penalty.  This time, the Panthers did it right.  They set up in the Dodge County zone, moved the puck well and scored.  Heidi Winiecki scored the game winner, Ashley Kloncz got the assist.

Lakeville North won 3-2.  The top four teams in the state tourney will be seeded after this weekend.  Minnetonka, Mounds View, Benilde-St. Margaret’s, and Eden Prairie have been ranked ahead of the #5 ranked Panthers most of the year.  Tonka and BSM play the Section 6AA championship tonight at Parade.  Tonka is favored.  Eden Prairie also plays in the Section 2AA finals against Edina tonight at Bloomington.  Mounds View plays Irondale at Roseville in the Section 5AA finals.

North is likely to end up with the #4 seed to the state tourney and play the #5 seed which is likely to be the winner of section 4AA, Hill-Murray or Roseville.  That game is also played tonight at Hill-Murray.

Dodge County ends their season, but it was a good one for the Wildcats.  They had the fans on their side for the game last night and lose only two players through graduation.  Dodge County is not going away.  They will be back next year.

RT @usahockey: "One of the greatest rivalries in all of sports." 🇺🇸 vs. 🇨🇦 tonight at 7:30 p.m. ET on @NHLNetwork! #MyWhyTour game previe…