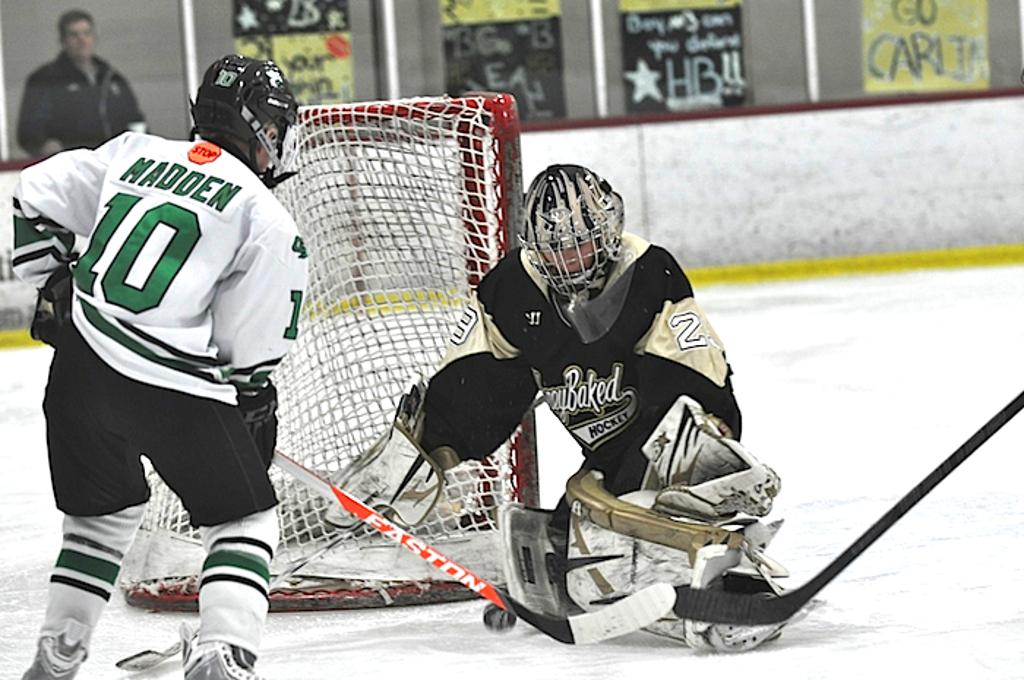 As their trip to Michigan draws to a close the experiment of taking a community based team to play a few games against Tier 1 AAA teams has been a success.  As predicted the games were close and well played on both sides. Both sides were very impressed with the play and the kids had a blast (again one of the story lines that gets forgotten).

Day 1: The boys got a chance to visit the University of Michigan and got a tour of the U of M’s hockey facility and practice at Yost Arena, home of the Wolverines. Ex-Wolverine John Madden got a chance to his son Tyler’s friends where he played “cawledge” hockey. After their skate they headed to Detroit to play their first game against HoneyBaked in Hazel Park, MI.

Game 1: Arguably their toughest test was going to be versus HoneyBaked.  The #2 rated team in America coming off a big win over the Chicago Mission the week prior, HoneyBaked was going to be an even match for the Hornets.
For Edina fans the first 10 minutes looked like every Edina game. The Hornets attacked the Hams with everything they had but Zach Borgiel was equal to the test stopping everything in site. HonyeBaked coach Trevor Edwards said later, “our goalie kept us in the game in the first period…he’s on our team for a reason.” Halfway through the first Max Ellis from Plymouth, MI got the Hams on the board on after an Edina turnover on a pretty pass from Colin Shea from Oxford, MI. It was 1-0 after 1. Shots were 7-4 in favor of Edina.

In the second period Edina got things even when Jerome Newhouse created a short handed breakaway and scored to make it 1-1 at the nine minute mark. Still on the power play, HoneyBaked scored on a pretty pass from Noah Carlin from Marine Point, MI to Brady Smith who unleashed a bomb past the Edina goalie to make it 2-1. Later in the second, HoneyBaked got the all important “next goal” on the power play when Noah McNutt from Port Huron, MI scored on a scrum in front of the net.  Matt Kessel from Bloomfield Hills, MI was credited with the assist to make it 3-1 at the end of two. Edina led in shots 24-12 over the “puck possessing” Hams.

Early in the third, little man Liam Malmquist pulled Edina within one when he got a loose puck and beat the goalie top shelf on the short side. As the clock wore down later into the third period, Edina began to press. Holding the zone down by one began to become a priority for the Hornets. This pressing gave the opportunistic Hams a chance to counter punch their way into a three on one break and they pumped in a beautiful goal when Andrew Remer from Lake Orion, MI finished off a tic tac toe passing exchange from Max Ellis and Brady Smith to make it 4-2. Final shots were Edina 35, HoneyBaked 18.

After the game, YHH caught up with HoneyBaked Coach Trevor Edwards where he had several glowing remarks about the Edina team. He told YHH that, “Edina had great core skating skills, they had no weaknesses…the game came down to who converted on their opportunities.  Tonight it was us, but I think this game could have gone either way.” The highlight for Edwards was not the game itself. For Edwards it was the opportunity for the boys to sit down together afterward and share some pizza and to get to know one another. “After the game was a cool experience for our boys.  A chance for them to meet these boys from Minnesota was great.  I’m sure that these kids will face one another many more times in USA Hockey events and AAA hockey in the Spring.”

Day 2: The Hornets next game was played versus Little Caesars at the Suburban Ice Rink in Farmington Hills, MI. The way Suburban was described reminded me of the Highland Rink in St. Paul, except no bleachers.  Older rink with an enclosed viewing area behind one of the goals.

Little Caesars got the scoring started at the 10 minute mark when the counter punching Pizzas got an odd man rush and Ryan Lautenbach scored on assists from Joey Larson and Antonio Venuto. Edina’s Jack Jensen scored a few minutes later on the power play when he knocked home a rebound off of a Ben Brinkman shot from the point. Late in the period Edina speedster Stephen Doll got onto the score sheet with a rebound goal with assists by Jerome Newhouse and Bjorn Swanson to make it 2-1 in favor of Edina after one. Shots were in Edina’s favor 8 to 5.

The second period was played at a slower pace than the first.  Minimal scoring chances for either side and very few penalties called on either team for most of the stanza.  If you left the rink at the four minute mark you pretty much missed the game. At 4:43 Lewis Crosby scored on the power play off of a nice pass from Richie Holetz who secured a rebound of a Peter Tabor blast from the point. Eighteen seconds later Jensen scored again after taking the puck wide and beating the goalie in the five hole to make it 4-1 in favor of Edina. Seconds later after another scrum in front of the Little Caesars net, Edina big man Jack Lagerstrom fired a laser past the LC goalie to make it 5-1 Hornets. At the end of two it was 5-1 and the shots were 18-16 in favor of the Cake Eaters.

Seconds into the third Lautenbach got into the act again getting his second lamplighter of the day on a second chance rebound with assists going to Blake Couley and Aiden Gallacher. Minutes later Edina’s Doll got the puck in the left slot and fired one of his patented top shelf shots past the LC goalie to give Edina a commanding 6-2 lead. Edina held on to the lead and won 6-2, barely outshooting the scrappy Little Caesars team 25-24.

Game 2:  On Saturday afternoon, Edina took on Compurware at the Compuware Arena in Plymouth, MI.  The home of the Plymouth Whalers of the Ontario Hockey League. Without great detail of the game here is a brief recap.  Edina won 4-3 in Overtime.  Edina got out to a 2-0 lead after 1 and 3-1 lead after 2. As the game wore on Compuware began to play more confident and even out the pace of the game. Compuware evened the score in the third with six minutes to play to send it to overtime. In the overtime, Tyler Madden got the game winner on a nifty backhand toe drag to give them an impressive two and one record for the weekend. Other Edina goals scored by Ben Brinkman, Richie Holetz (below left), and Jack Lagerstrom.

Commentary: Since our site announced this trip a few weeks back there has been ample discussion about this trip.  It has been a lightning rod of discussion that has opened up several meaningful discussions about the merits of Association Hockey and Tier 1 AAA hockey. The remainder of this post will briefly touch on a few of the hot topics that arose.

Age: A common hot button is that Edina was older than the ’00 Tier 1 teams because of the ’99 birth year kids.  When in reality the teams were both about the same age, same size and same ability (as is proof of the outcomes).  If the age was a major factor, neither of the three AAA teams would have been dumb enough to take on a game where they would be out matched. Not to mention, the games were played without checking eliminating any advantage the Edina kids with all of their seniority would have gained.

Excuses: My writing of this article has been criticized for building in excuses for the Edina team even before the first puck was dropped.  Here are the facts: Clayton Phillips the Edina leading scorer did not play. If I left this fact out of my story, it’s incomplete reporting.  I said that fatigue may be a factor late in the LC and into the Compuware game.  After playing and coaching hockey for 30 years at some point I figured out that if one team plays 3 games and the other plays one, the fatigue in the one team will eventually begin to show. Again, more incomplete reporting if I leave out the facts.

Minnesota/Edina Biased: My article was Minnesota biased.  My viewers and advertisers are primarily Minnesotans (although if you read our site, covering teams from all over the US is a priority…just ask our friends in Colorado and now Detroit). I grew up in Southwest Minneapolis.  My high school was 3 blocks from the Edina border and less than 2 miles from Edina High School. If anyone believes I have a personal bias in favor of Edina, they don’t know me.

Purpose: The purpose of this article was to showcase two very successful models of hockey that produce hundreds of Division 1 and NHL players each year: Minnesota and Michigan and how they play hockey.  After several discussions with many people about this trip and both models I have a different appreciation for the way things are done in both states.  The trip combined with our coverage has opened up several doors that appeared to be closed:
-Why not Tier 1 AAA in Minnesota?

-Can Tier 1 AAA teams come to Minnesota in the winter and take on our top AA teams, and how will they fare?

-Is cheering for an Edina team bad for your health (I had a bad rash by Saturday afternoon)?

-Is the Minnesota model too soft? Do we call body contact at Squirts and PeeWees too tight? Do we teach body contact, at all?

-Will another Minnesota team try this in the future (next year Edina AA will be strong, the year after it could be Rosemount, the year after it could OMG)?
Special thanks to all of the coaches, parents and team managers from Detroit and Edina for providing YHH the necessary information to make this coverage possible.  I really enjoyed getting to meet you guys over the phone and learn more about the way the kids in Michigan play a great game.