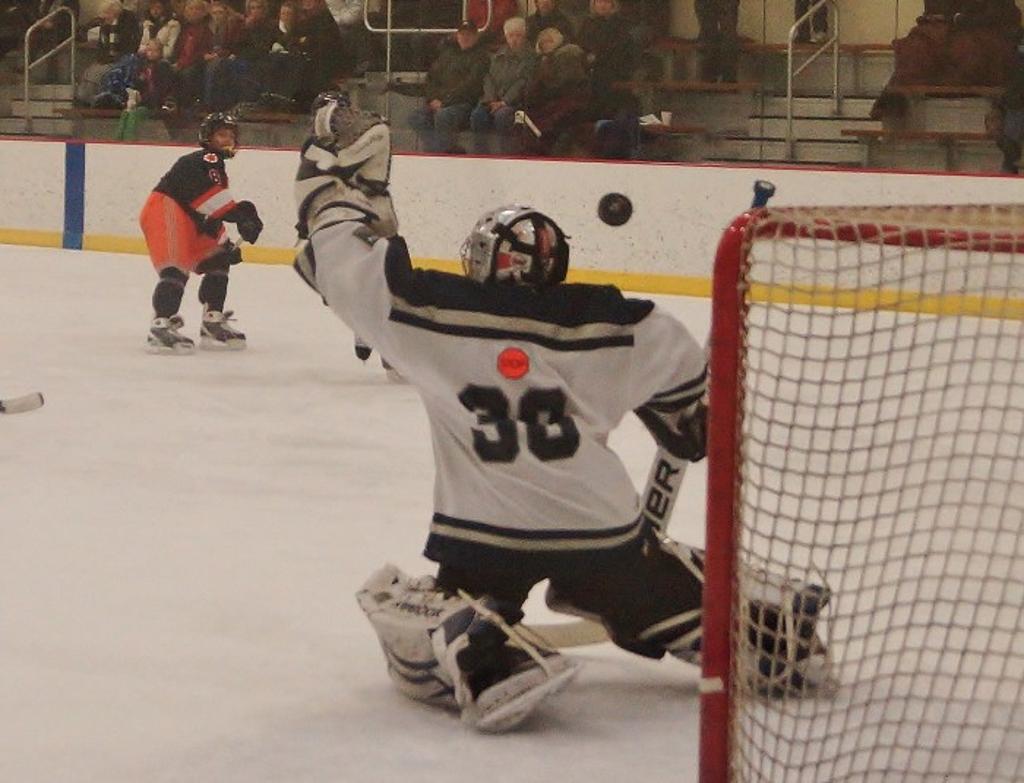 White Bear Lake’s Cullen Guzzo watches his shot go into the net in the Bears 3-1 win over Champlin Park at the Moose Goheen.

Tartan is the highest NOW ranked team in the D2 peewee A playoffs.  The #10 ranked Titans has played well since the Bloomington Midwest Regional tourney over the Christmas Holidays two months ago.  The Titan took third at Bloomington beating Wayzata A 5-4.  Since losing to North St. Paul 5-2 and Mounds View 4-1, Tartan has lost only once, to Cloquet AA 3-1 at Cloquet’s Barn Burner Tourney, in their last 16 games.  Two of the Titan’s wins in those 16 games were over Mahtomedi.  They beat the Zephyrs 1-0 and 4-1.

Mahtomedi is a tough defensive team.  The Zephyrs showed that when the held the #1 ranked Edina A team’s offense off the scoreboard in losing 2-1 to Hopkins in their Thanksgiving Day tourney.  In January, they have held their eight D2 opponents to average of two goals a game.  Tough defensive makes the Zephyrs a tough team going into the playoffs.  Still, the Titans win.

North St. Paul is a dangerous team in that they have played well, beating Tartan 5-2 and Mahtomedi 3-0 as well as Highland.  They lost to Roseville 6-1 (yhh article), tied Prior Lake A, and lost to Stillwater 5-1 in late January.  The Polars have some solid forwards, but the defense seems to play hit or miss; having a good game and then faltering.  That patterned continued in February.  The Polars beat Prior Lake A 5-2 and then tied Red Wing 3-3 two days later.  The “up” Polars “show up”.  They beat the Caps.

Tartan beats North St. Paul for the championship and the #1 seed; Mahtomedi eliminates Highland.  In a repeat of last year’s D2 play-in game, Mahtomedi and North St. Paul play for the #2 seed.  This time the Polars win.

The D2 playoffs began this weekend at the St. Croix arena.  The first game will be played Friday night and will match the #4 seeded Mounds View and the #5 seeded Forest Lake teams.  Mounds View is always a tough team.  The Mustangs won their pool at the St. Cloud Center Ice Classic in mid-January beating Stevens Point Wisconsin 3-2, losing to D8 Hastings 4-2 and beating Thief River Falls 8-2.  In the championship semifinals the Mustangs lost big to St. Cloud 11-4 and lost third place to D6 Shakopee 4-1.

Forest Lake AA continues to struggle.  They have not won in January or February.  The Rangers have a good defense and have kept the games close.  They have two ties in the past six weeks, both with Mounds View, 1-1 and 1-1.  The last tie game was played last week.  Mounds View wins.  Forest Lake waits to play in Monday’s loser bracket game.

In a Saturday evening game, the #1 seeded Stillwater plays Mounds View.   Stillwater ran into a tough Blaine AA team at Roseau’s Dick Johnson Tourney at the end of January.  The 5-2 loss to the Bengals ended their hopes of getting to the championship round.  The beat Roseau 11-3 and tied Chaska 5-5 in their other two pool games.  Sunday, Minnetonka AA gave the Ponies a bad sendoff beating Stillwater 10-2 on getaway day.  Since then, Stillwater won four D2 games to take the D2 regular season championship.  Outside of D2, the Ponies struggle.  Mounds View beat Stillwater 3-2 and tied Stillwater 2-2 early in the season.  Mounds View wins.

The NOW ranked #13 White Bear Lake team made the championship round of their Moose Goheen tourney played at the end of January.  The Bears beat Champlin Park AA 3-1, Woodbury AA 6-4, and tied Prior Lake AA 2-2 to win their pool.  They lost to Centennial 6-3 in the semifinal round and beat Prior Lake AA 5-2 for third place.  After a great tourney, the Bears were tied by Tartan 1-1 in a critical D2 game that cost the Bears the championship.

Roseville always gets tough at D2 playoff time.  It happens every year and the Raiders are showing signs of it happening again.  They beat Edina A 5-4, Woodbury AA 3-1, and Highland 5-4 in January but have lost to Sibley A 6-3, Centennial AA 3-2 and Chaska/Chanhassen AA 6-1.  Roseville is a tough team to beat if their forwards are playing “on”.  But in February, their defense has spun four shutouts in their last six regular season games.  White Bear Lake relies one the forwards who have great individual scoring skills.  The Roseville new found defense should stop the Bear forward rushes.  The Raiders beat the Bears.

Stillwater and White Bear Lake battle Sunday in a loser goes home game.  The Bears edge the Ponies and move on to play Forest Lake.  The winner of that game will play the loser of the championship game for the remaining two D2 seeds.  The Bears beat Forest Lake.

RT @OriolesBantamA: Successful game vs @SBantamAA. Eli Charney gets the shutout between the pipes giving the orioles a boost of confidence…

RT @ARikkola: Cottage Grove Bantam B1 Boys played a scary good game! Great finish for the first tournament of the year at the CG Pumpkin Ba…