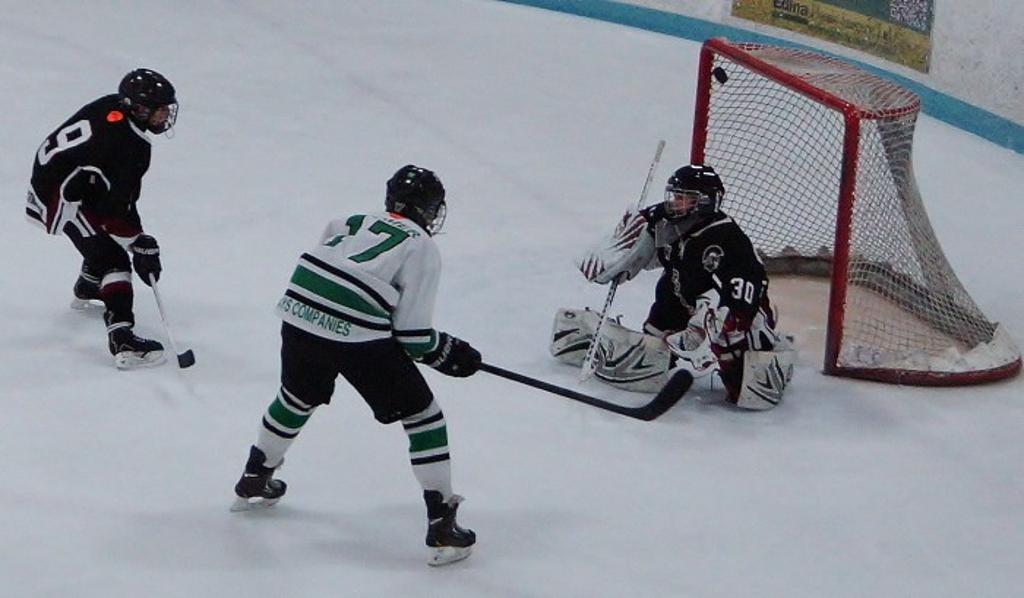 Edina A forward Andy Kromer follows his shot to the net looking for the rebound. Kromer fired his hard shot from the top of the faceoff circle and nearly caught up to the rebound in the Hornets 6-0 D6 win over New Prague A.

Edina A is unbeaten in the D6 peewee A league with a 16-0 record.  The Hornets locked up the title and the #1 seed, but after that there was a scramble to take second place with three teams, Minnetonka A, Chaska Aand Prior Lake A all tied.  Sorting out the tie, Minnetonka A ended in second place and got the #2 seed in the D6 playoffs.

The Skippers and the Hornets need to win only once in the playoffs to get a regional seed.

Prior Lake ended up with the third seed and Chaska the fourth seed in the D6 peewee A playoffs scheduled to open play this Saturday at Chaska.

The first playoff game will match #8 seeded Waconia and #9 seeded Kennedy.  Both teams have struggled as the regular season has ended.  Waconia looked flat when they lost to Minnetonka A 5-0 in a D6 game three weeks ago.  Since then they tied Kennedy 5-5 and pushed Shakopee A and Prior Lake A before losing each game by one goal last weekend.  Kennedy had a good game in losing to Chaska A 6-5 at the end of January, but has struggled in February losing three D6 games to New Prague 5-1, Shakopee 8-1 and Minnetonka A 7-1.  Waconia beats the Eagles to advance.  Kennedy’s season ends.

Sunday first game matches Waconia  and #5 seeded Shakopee.  NOW ranked #11 Shakopee has made a move playing well as the season is ending.  The Sabres took third place at St. Cloud’s Center Ice Classic beating Mounds View AA 4-1.  They lost to Woodbury AA 5-3 in the semifinals.  The Sabres took second place in Faribault’s tourney beating Champions Hockey (Iowa) 8-3 and Burnsville AA 4-3.  The Sabres lost to Hopkins 6-4 in the championship game.  Shakopee has been on a hot streak in February going 6-0-1.  They tied Chaska A 4-4.  Shakopee wins.

The second game Sunday matches New Prague A and Eden Prairie A.  The Trojans beat the Red twice in D6 play, 6-3 and 3-2 last week.  The Trojans beat Eagan 2-0, lost to Shakopee 7-3 and lost to Edina A 6-0.  They looked good against Edina but drew too many penalties (the refs did a poor job-but that is a subject for another day).  The Red started the season sluggishly, but have improved.  They have tied Minnetonka A and Shakopee in the past month.  The Trojans win.

Monday’s games should match Chaska A and Shakopee A in the first game and Prior Lake/Savage A and New Prague A in the second game.  These two games are the critical ones to win in the D6 peewee A tourney.  The losers go home, the winners become one of the four remaining teams chasing three regional seeds.

Chaska beat Shakopee in early December 7-4.  The two teams tied 4-4 February 1.  Chaska’s defense has struggled as the season ended while Shakopee’s offense has gone into high gear.  The Sabres win.  Prior Lake A have tied twice in D6, 2-2 in November and 3-3 in the first week of February.  New Prague wins in a battle of neighboring rivals.

Edina A, seeded #1 and NOW ranked #1 in the state, plays their first playoff game on Wednesday, February 20.  They should play Shakopee.  The Hornets beat Shakopee in early November 7-2 and beat them again 5-1 in early December.  Edina wins.  New Prague beats Minnetonka A in the second semifinal game.  The Trojans are playing well as the season ends, Minnetonka A has struggled.

The D6 championship game would then match Edina A and New Prague.  The Trojans beat the Hornets at the New Ulm tourney in January, but this time.  Edina wins and gets the #1 seed.  New Prague gets the #2 seed.  Shakopee beats Minnetonka A to take the #3 seed.

Edina AA takes the #1 seed.  The Hornets finished the D6 regular season going 12-0.  Eden Pairie AA takes second place and the #2 seed.  By winning those seeds, Edina and Eden Prairie are guaranteed a seed to the regional tourney based on D6’s updated peewee AA tournament format.

Prior Lake AA surprised everybody and finished third by going 2-0-2 in their last four games.  The Lakers get the #3 seed.  Chaska hung on to edge Minnetonka and Jefferson for the #4 seed.  Minnetonka has the tie breaker with Jefferson and gets the #5 seed.  Jefferson gets the #6 seed and Burnsville the #7 seed.

Jefferson and Burnsville open the D6 playoffs this Saturday at Chaska.  The Jags should win, they beat the Blaze last Sunday 7-1.  Burnsville goes home.  There are now 6 AA teams competing for four regional seeds.

The gauntlet is gone in the peewee AA playoffs this year.  The gauntlet has been a D6 playoff feature that would have been out of place in this year’s D6 playoffs.  With seven teams and four regional seeds up for grabs, the single elimination game yields a six-team format AA tourney.  But it is single elimination and the current format shows no resolution on how the #4 seed is determined.

The assumption here is that the four semifinal teams will all get a regional seed.  That makes Jefferson’s next game against #3 seeded Prior Lake a key game.  The Jags lost to Prior Lake 5-1 in early November and tied the Lakers 1-1 three weeks ago.

The defending state champions and #13 ranked Lakers have played 17 games since the first of the year.  Playing more games at the end of the year has been a Prior Lake trait.  They have gone 7-4-6 in that time playing mostly NOW top ranked teams.

Jefferson has 10 games since the first of the year against similar competition and has compiled a 3-4-3 record.  In a tough game, the Lakers win.

The #4 seeded Chaska team plays the #5 seeded Minnetonka.  Both teams have hit the February “funk”.  The Skippers have fallen in the NOW rankings going 7-7-1 since the first of the year.  Chaska has gone 8-7-3 since the first of the year.  A combination of flu and strep throat has been making the rounds in the past six weeks.  Chaska has been playing well the past two weeks beating Orono A 10-5, Eastview AA 4-3, and Lakeville North AA 4-3.  The Hawks should be “sans” illnesses when they play the Skippers Sunday.  Chaska wins.

In the semifinal games a week from today, unbeaten (in Minnesota) and NOW ranked #1 Edina starts tourney play.  Their first game should be against Chaska.  The Hornets have returned from a trip East after playing three tough AAA teams going 2-1.  They played #2 ranked Lakeville South Tuesday beating the Cougars in an elongated game at Minnesota Made (separate post).  The Hornets have beat Chaska 8-1, 11-1, and 9-0 this season.  Tuesday they beat #2 ranked Lakeville South 8-3.  The Hornets should win again.

The second semifinal game Sunday, matches Eden Prairie and Prior Lake.  The second place Eagles have yet to win a game in February.  They tied the Lakers 5-5 a week ago and then pushed Edina AA in losing 4-3.  The Lakers pull an upset.

In the championship game, Edina beats Prior Lake.  In the third place game, the Eagles continue to slide.  Chaska wins.  Edina AA takes the #1 seed to the East Regional, Prior Lake the #2 seed and Chaska the #3 seed.  Eden Prairie gets the #4 seed to the South Regional.

GHS Edina vs. Holy Family in pics (The Fam) https://t.co/wEaZa0Gjo2

GHS Postgame Skate Edina cruises past Holy Family 4-0 in a battle of two top-5 teams. Game summary and some tho… https://t.co/yaNSyT2HWr