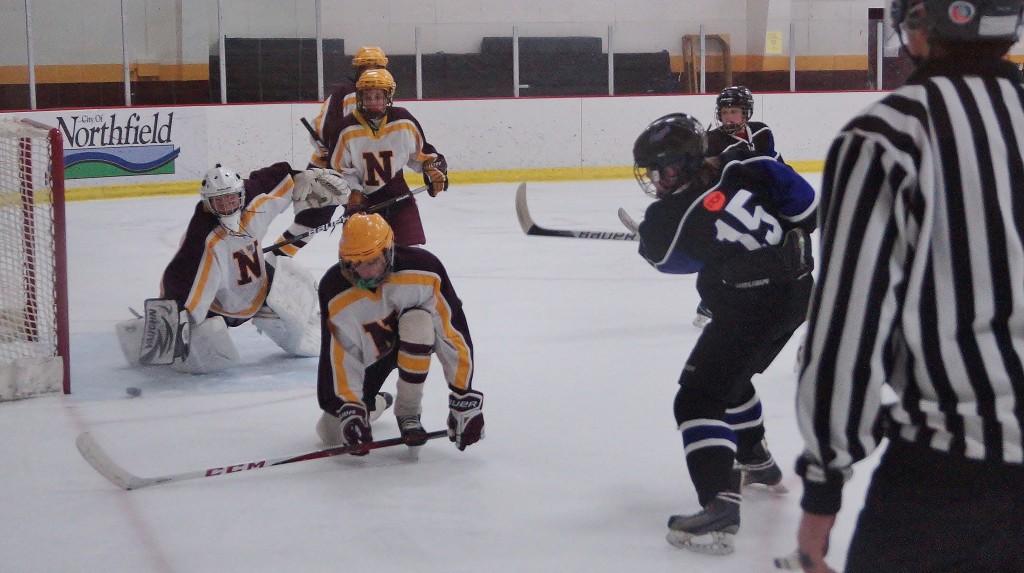 Mankato and Owatonna are the aligators in D9 peewee A league this year.  Before last night’s game with Northfield, Mankato was in fourth place in D9 with a 11-1 record and 10 more games to play before the season ends February 9th.  Owatonna was in third place with a 13-0-1 record (Rochester Black tied them 2-2 January 2nd).  Both teams should rise like aligators to the top of the standings in the next few weeks.

To get there, Mankato has four tough road games this week, Northfield, Owatonna, Waseca and Winona.  That is 600 miles total in the four days.  If you went to Roseau for the peewee A tourney this week from the cities you would have put 700 miles on the car.

The Mavericks won their first game of the four game weekend swing last night.  They beat Northfield 5-1.  The Raiders were in second place, but going into last night’s game had played 5 more league games than the Mavericks and held only a two game lead.  A Raider win would have forced Mankato to go 4-1 in the extra games to catch the Raiders.

Instead, the Raider loss last night ended their hopes of a D9 regular season title and the #1 seed to the D9 Peewee A playoffs.

This year D9 has decided on an 8-team playoff tourney to be held at Red Wing February 14-17th.  The tourney format will be likely Minnesota Hockey’s recommended format for an 8-team, three seed, playoff.  But these formats do not always fit well with available ice, so anything can happen.  As of today, the tourney seeding is all important.  Both Northfield and Mankato wanted the highest seed possible to have the easiest path to the seed.

The first 15 minute period was a choppy affair; both teams were slow and out of sync with their play.  Both teams have played better.

Northfield drew a tripping penalty in the first minute of play.  Mankato never got their power play organized enough to gain control of the puck in the Northfield zone.  The Raiders easily killed the penalty.

It took 8 minutes of play before the teams started to play hockey.  In the first 8 minutes, both teams moved the puck slow around the rink without purpose except for an occasional one or two player rush on the net.

At the 7 minute mark the game pace picked up.  Northfield started to hit the forwards in center ice in the neutral zone on the break out.  It resulted in the forwards trying to break through two or more Mankato defenders.  The Raider forwards would almost succeed, but never quite succeed enough to generate a real threat on the Mankato net.

The Raider forward were clearing the defense too low in the zone to effectively attack the Mankato goal.

Mankato started to drop their puck carriers low in their zone on the breakout.   The Maverick puck carriers would use their own players on rushes up ice cutting off them to move through the Raider defenders.  Most of their attempts to beat the Raider defense resulted in being taken off the puck in the Northfield zone.

With 5 minutes left in the first period, Northfield drew their second penalty of the period for slashing.  Mankato managed to gain control down low around the Raider net.  In a quick melee of players and shots, the puck was cleared to right to the Mavericks’ Ethan Swenson.  Swenson’s shot beat a Raider defender and the goalie, finding a narrow angled path into the net.  The Mavericks led 1-0.  Ben Stephenson and Kam Krueger got the assists.

The first period ended with Mavericks leading 1-0.  Both teams suffered from lack of passing in key situations.  Often the puck carrier would try and force the play and ignore the open better play off the pass.

After playing an up tempo game at the end of the first period, the first five minutes of the second period reverted to the slow play of the first period opening minutes.  The Mavericks scored at the 12 minute mark when a melee in front of the Northfield resulted in the Mavericks Krueger scoring.  This time, Swenson got the assist.  Mankato led 2-0.

At the 10 minute mark of the second period, the game pace picked up for a minute.  Both teams started playing with purpose only to slow down a minute later.  As the second period wound down, Mankato began to assert itself more and more.  Northfield tried to counter by upping their efforts on the center ice breakout.

The Raiders center break out play was almost working for the whole game; the problem is that it worked only a few times.  When it did succeed, it resulted in solo rushes on the goalie Jackson Peterson, but only from the top of the slot to the net.  Peterson made the stops every time.

Two minutes into the third period, Mankato scored again.  This time, the Mavericks Garrett Rabenhorst got the goal.  Stephenson got the assist.  Mankato led 3-0.

The Raiders breakouts were still not quite succeeding.  The Raider defense was starting to cut the corner on their own net and fire the puck up the slot trying to hit the center forward, but the Mavericks were adjusting and the play was starting to break down.

With five minutes left to go in the third period, the Mavericks drew a tripping penalty.  Northfield set up on the power play in the Mavericks’ zone only to give up the puck at the blue line to the Mavericks’ Jake Anderson.  Anderson “soloed” the length of the ice to score shorthanded and put the game out of Northfield’s reach.  Mankato led 4-0.

A minute later, the Mavericks scored a power play goal.  This time, Ethan Swenson scored from the blue line to give the Mavericks a 5-0 lead.  Anderson got the assist.

Frustrated at never being able to beat the Mankato defense by breaking through the center ice; Northfield finally scored by breaking through the center ice.  In the last minute of play, the Raider’s Devon Jirik beat the Mankato defenders with a burst of speed.  He barely kept the puck in front of him as he cleared the Maverick defense in the slot.  Jirik drove the puck on a high bounce toward the Maverick goalie crashing into the goalie with a Maverick defender crashing behind him.  All three ended up in the crease and the puck ended up in the net.

The Raiders finally scored.  Jirik got the unassisted goal.  Mankato won the game 5-1.

After last night, Red Wing is in first, Northfield in second, Owatonna rising in third, a tough Rochester Black team in fourth, and Mankato rising in fifth.  All these teams, except Northfield, will scramble in the last four weeks of regular season to get to or keep #1.  And they all have the chance to do so.

Northfield needs to win their last two league games to get to 50 points in the D9 standings.  That would give the Raiders a 4th or 5th place finish, but a single loss could drop them to 6th.

Mankato plays Owatonna tonight (Friday) on their second road trip in their four day “swing”.  The winner of that game could end up being the D9 champion and the #1 seed.

With an average of 6 league games left to play this year, 8 teams are at or above the 30 point mark in the standings.  Four teams are below the 30 point mark, St. Peter/LeSeure, Austin, Dodge County, and Winona.  Dodge County and Winona (1-13-2 and 0-13-3 repectively) cannot reach 30 points.  St. Peter/LeSeure and Austin can.  At this point, D9 has not mentioned the possibility of any play-in games.  If there are no play-in games, the four teams below the 30 point mark will likely see their season end February 9th.

A happy heavenly birthday to my bother Tom today. Tom was the pep band director at Hill-Murray HS - he loved mixing… https://t.co/hmlzANI0EC