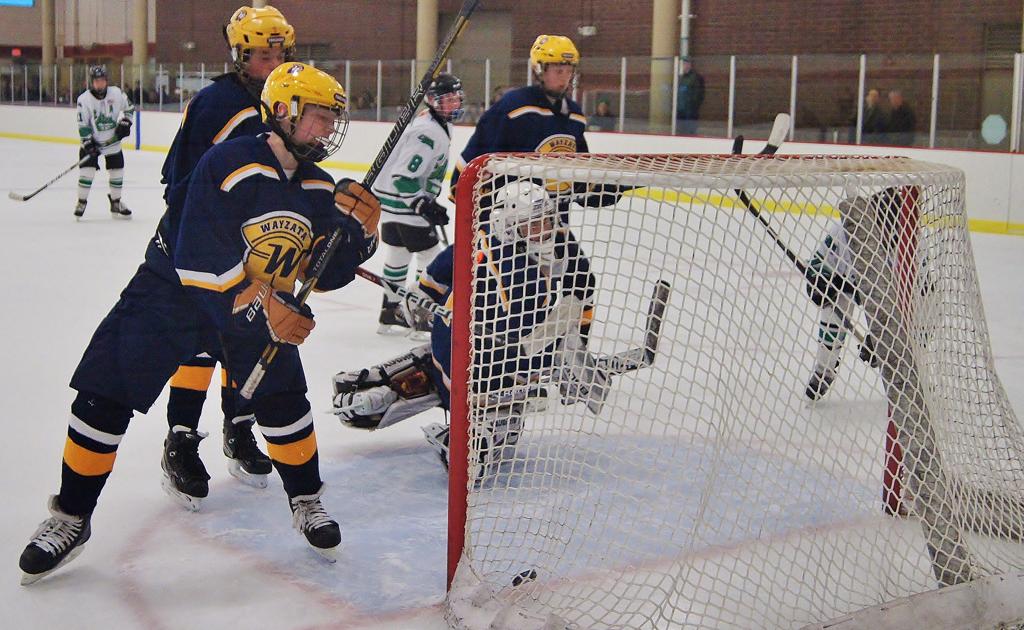 The 36th annual Spirit of Duluth Tournament will be played this weekend. The tournament is really three tourneys, a 16 team peewee A tournament, a 16 team bantam AA tournament, and a Junior Gold Tourney. This preview covers the peewee AA tourney. The Spirit is noted for playing games in multiple arenas throughout Duluth. That is true this year. Based on current schedules for this year’s tourney, Edina peewees will play in the Sill arena on Friday, DECC and Seitz on Saturday, and if they make it to the championship game, Seitz on Sunday morning and Sill on Sunday afternoon. If they lose, they could end up playing in Fryberger and Mars. The Hornets should win.

Centennial is the only team in this pool that can possibly match the Hornets play. The Cougars lost to Edina AA 8-1 three weeks ago, but tied Eden Prairie AA, beaten Stillwater AA, and beat St. Cloud 8-0.

The Thunder Bay Elks have not had many games and will have a tough time handling either Centennial or Edina. Cloquet is in the same “boat”. The Lumberjacks’ season is just getting going. They have beaten District 11 rivals Denfeld A 7-1, Superior Wisconsin 4-3, and Hermantown AA 6-3; but lost Sunday to Grand Rapids 7-0.

The Saturday 11:00 game between Edina and Centennial will decide the pool. Edina should win the Blue Pool, Centennial takes second. The YHH rankings should be accurate for this pool.

The White Pool has two top teams and two struggling teams. Wayzata AA and Prior Lake AA should dominate; Forest Lake and Hermantown should struggle. Wayzata AA sort of an enigma. They have beaten some tough teams, but seem to come up short against teams they should beat or at least play tougher. At some point this season, things should click and when they do, the Trojans will be tough on all teams. They come into this tourney after making the championship round at Eden Prairie. To get there, they beat Grand Rapids AA 5-3, lost to White Bear Lake AA 4-2, and beat Chaska AA 4-2. After taking a bad beat from Edina 9-0, Wayzata AA lost a tough game to Eden Prairie 2-1 in the third place game. Since then, the Trojans have beaten D3 rival Crow River 3-2 and #10 ranked St. Michael/Albertville 3-0.

This pool sets up just like the White Pool. The pool winner should be determined by the Saturday evening game between Wayzata AA and Prior Lake AA. It will be blue and gold versus blue and gold and the jerseys with the W on it will win.

That result would match the YHH rankings, Wayzata takes first and Prior Lake takes second.

The Eden Prairie Eagles lost two early season games to Eastview AA 4-2 and to Wayzata AA 7-1. Since then Eden Prairie has been on a roll, winning 8 of their last 9 games. Their only loss was to Minnetonka 4-0 in the semifinals of the Eagle’s tourney. Elk River opened with a couple of big losses to Lakeville South AA 7-4 and to Wayzata AA 9-2. Then the Elks pushed Edina AA in mid-November game before losing 5-4. Since then the Elks have won 10 of their last 12 games, but their two losses were sort of surprises (Stillwater 6-4 and Centennial 5-3).

Superior Wisconsin plays in District 11 along with Denfeld. Superior is listed as a AA team in the YHH rankings and are currently ranked in the middle of the Peewee AA rankings. Superior has beaten District 2 Tartan twice this year (5-4 and 2-1); but have lost three times to Duluth East (5-4, 6-2, and 4-1). Most surprising is their lost to Eveleth two weeks ago 6-3. That creates a question that is unanswerable today; is Eveleth “up” this year or is Superior “down”?

Denfeld has struggled this year, but have two good wins. The Hunters beat Superior 2-0 and Proctor 3-0. Proctor had a good tourney at Orono over the weekend. The Rails have surprised people with their passing game and controlled defense.

In those past, hotly contested, pool championship games; Elk River has always found a way to beat the Eagles and though this will be the first meeting of the year, the nod goes to Elk River. The intangibles matter and the YHH rankings fail in this pool.

The Red Pool is the last pool discussed for a good reason, all four teams in this pool are ranked and Duluth East, potentially the weakest team, is ranked #3. The rest are ranked #11, #13, and #14 (OMG AA, Minnetonka AA, and White Bear Lake AA).

After coming within a goal of knocking Edina AA out of the Eden Prairie tourney (the Crimson lost 3-2), OMG AA went on rampage, beating Stillwater AA 11-3, Elk River AA 4-2, Chaska AA 6-3, Lakeville North AA 4-0, and Hopkins AA 10-1. Rolling along untill this past Sunday, the Crimson stumbled. They lost to Andover AA 2-1. Andover AA is a good team and could be the surprise of this season, but OMG AA losing did not make sense at this point.

Minnetonka AA also has the hot hand going into this tourney. They have been play well, but a last week 6-3 loss to Chaska AA hurts. The Skippers are a dangerous team as is White Bear Lake.

The #3 ranked Duluth East is the real question and “are they real is the question”? The Greyhounds split with Moorhead AA two weekends ago, losing 5-4 and winning 10-5. They also split with Chaska AA, losing 7-5 and winning 8-2.

This is a tough pool and the YHH rankings confirm that. The pool analysis has to be broken down to predict the winner.

Duluth East and Minnetonka open the tourney 11:00 Friday at the DECC. Tonka has been caught by surprise in past tourneys, playing the first game. But not this year; the Skippers beat Duluth East. White Bear Lake and OMG play the next game at the DECC. OMG wins a tough game over the Bears.

East and White Bear Lake tangle in the first game Saturday morning, the Bears win eliminating East. The Skippers beat OMG in the second game, throwing White Bear Lake and OMG into a potential three way tie with Minnetonka for the pool championship if the Bears can beat the Skippers in the evening.

OMG has to contend with Duluth East in the Saturday evening game and they lose, leaving the winner of the White Bear Lake/Minnetonka the pool champion. If they could tie, both would advance. That does not happen. The Skippers win. Duluth East, via tie breakers, advances to the consolation round. For this pool, the YHH rankings don’t work.

The semifinal round played 7:00 AM Sunday morning matches Edina and Wayzata and for the third time this year Wayzata takes a beating. In the other semifinal, Elk River beats Minnetonka setting an Elks versus Hornets championship game. The championship game will be tougher than expected, but Edina wins. The Hornets, by the luck of the draw, play four opponents that they should beat easily. Their first tough game will be Elk River in the championship, unless Wayzata finally shows up.

Tyler McCracken scores for North Dakota! Bringing the score 4-3 to against the Sharks in the 2nd half of the BEL Qu… https://t.co/pKnqHjG1Tq