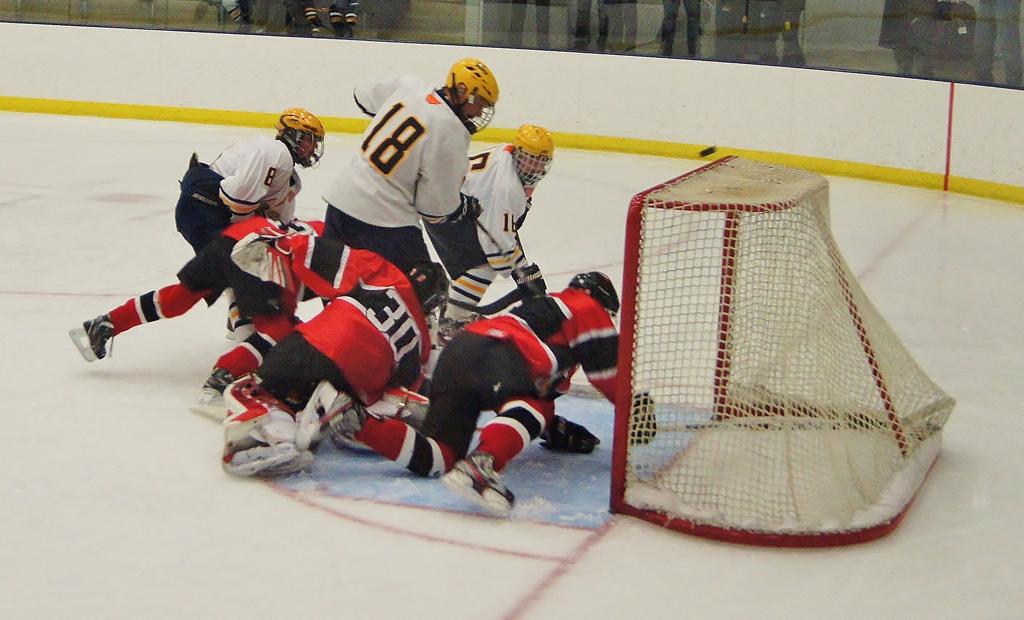 Last night at the Dakota Ice Arena in Prior Lake, two of the top Bantam AA teams in the state, Eden Prairie Black AA and Prior Lake Navy AA, clashed in a District 6 game.

The game comes two days after both teams having busy Thanksgiving weekends. Both teams played in Eden Prairie’s First Test of the Best Thanksgiving Tourney, but they did not play each other.

Prior Lake made it to the consolation championship on Sunday. They beat Eagan AA 3-2, Rogers AA 8-1, and tied Wayzata AA 3-3 in pool play, but lost the pool championship to Wayzata AA on a tie breaker (goal differential).

The game was played in Rink 1 at Dakota. It is a large capacity arena with great sight lines for thousands of people, but a youth game gets lost in its vastness. Between last week’s tournament games and turkey, everyone at the game seemed tired. The two teams and fans and parents had just spent an emotional Thanksgiving watching their teams compete.

The game started with a “ho, hum”. Both teams came out flat. The parents were flat. Even the refs seemed still full the holiday bird. It was like the Saturday after Thanksgiving dinner, the third time turkey was served. The excitement of the Eden Prairie tourney was over and this game seemed like leftovers. Everybody had had their fill.

The game matched two unbeaten D6 teams, somehow it didn’t matter. In the vastness of Rink 1, the game was quietly skated for the first two periods.

The first minutes of the first period both teams played tentative. Eden Prairie was the first to get a shot off. The puck clanked loudly off the pipe. It probably jarred some of the fans out of their melatonin sleep.

Halfway through the first period, Eden Prairie was getting some pressure on the Laker’s net, but couldn’t score. The Lakers were dumping the puck and attacking with a single forward low behind the Eagles’ goal with the wings looking to pinch the breakout along the boards. The Eagles were breaking out easily and getting some good scoring opportunities.

Neither team was having any success. Eden Prairie drew two penalties in the first period. The first they killed. Their second penalty of the first period came at the 7 minute mark. They killed the penalty, but as the penalty ended, couldn’t break the Lakers attack.

Prior Lake kept the pressure on in the Eagle’s zone. Thirty seconds after the Eagles returned to full strength, Prior Lake’s Matt Denman put the puck in the net off a rebound to give the Laker’s a 1-0 lead. Scott Reedy (a YHH top 50 pick last year) got the assist.

The Eagles pressured the Lakers for the remaining four minutes of the first period, but couldn’t score. The period ended 1-0 with Prior Lake leading.

The workman like game continued into the second period. The Lakers applied the early pressure and then drew an interference penalty when the Eagles broke out on a two on one rush.

The Eagles first power play of the game was none existent. They failed to get a shot on goal and Prior Lake easily killed the penalty.

At the 10 minute mark, the Lakers drew their second penalty. This time Eden Prairies’ power play pressured the Lakers in their zone, but still couldn’t score. Kyle Nelson, the Lakers goalie from last year’s peewee A champs and a YHH top 50 pick, played steady in the nets to keep the Eagles off the scoreboard.

At the 7 minute mark, the Eagles drew a penalty and it resulted in a Laker power play goal. Prior Lake set up in the Eagles zone and moved the puck to Jack Harris at the center blue line. Harris, instead of trying to power the through the Eagle bodies packed in front of the net, lofted the shot slightly. The puck cleared the bodies and ended up high in the right side of the net. The Lakers led 2-0. Denman and Curtis Hansen got the assists.

The Eagles cut the lead to 2-1 three minutes later. On the power play, the Eagles established control of the puck in the Lakers’ zone and attacked from the right side. Nelson stopped the first three shots (all within the slot area) but couldn’t control the rebounds. The Eagles’ Hugh Truempi scored from the slot on the fourth shot. Casey Mittelstatd and Nolan Sullivan (both last year’s YHH top 50 picks) got the assists.

After the Eagles scored, the game heated up. The puck movement picked up and both teams started to skate and move the puck. The period ended with Prior Lake leading 2-1. The ice was cleaned between the second and third periods.

The Eagles drew a tripping penalty in the first minute of the third period and killed it. Then game became more physical. It didn’t slow the Lakers.

The Prior Lake forwards were starting to dominate the Eagle defense in the neutral zone. Led by Matt Denman, the Lakers were successful in breaking through the defense at the Eagle blue line and pressuring the Eagle’s net.

After Eagles barely killed off a penalty at the 5 minute mark, the Lakers drew an interference penalty. Still trailing by only one goal and on the power play with less than 5 minutes left in the game, Eden Prairie looked ready to tie the score; but they were surprised by the pressure the Lakers established in the Eden Prairie zone early in the power play.

With the Lakers holding the zone, it took the Laker’s Connor Clemons thirty penalty seconds to score the game breaking shorthanded goal. Chase Gackle got the assist. The Lakers led 3-1. Prior Lake killed the remainder of the penalty.

Full strength and with the Eagles defense men trying to hold the puck in the Laker zone, Denman and Kevin Fellows broke out on a 2 on 1 rush. Fellows setup the lone Eagle defender drawing the defender towards him and flipped a pass to Denman who buried the puck to end the scoring 4-1.

Eden Prairie has a tough team. They will not give up many goals in a game, but their offense was slow trying to move the puck through the neutral zone and often dumped the puck.

Prior Lake’s three lines played well and all three lines will pressure any team. The Laker defense has improved and they have solid goal tending.

Both teams are young and both will improve, but last night on Rink 1, the Lakers impressed. The Lakers will contend in D6 this year. These two teams will play each other February 6th next year. That will be an interesting game to watch and it won’t be right after any holiday.