Wisconsin won their three games at the Showcase to take first place in the UMHSEL.  League leading MAP lost their three Showcase games to fall to a tie for third place.  Shattuck-St Mary’s Prep team, defending U18 Tier I national champs, struggled in their opening week of play at the Showcase losing their first two games and TCF Bank had only a minor flaw tying Luther’s 2-2 in their three Showcase games.  Things went as predicted in Week 3.  Week 4 opened with games played Tuesday and Wednesday this week.  Tuesday, the Bankers beat Mpls/St. Paul Magazine 5-3 and Shattuck came back from the poor opening with a vengeance handing MAP their fourth straight league loss 6-2 Wednesday.

Shattuck-St. Mary’s Prep team opened their season playing three UMHSEL games at the Showcase and struggled winning one of three games. The Sabres have size has size this year and they used their size effectively Wednesday late in the second period to break open a tie game with MAP to take a 4-2 lead and even their league record at 2-2.  The Preps are a younger team this year with 10 of the 20 players sophomores or juniors.

Shattuck’ Prep team normally rosters 20 players and usually a third of those players return the following year.  Most of the 12 or so players lost every year are replaced via Shattuck’s U16 team and AAA Midget team.  Not this year.  Only four players returned from last year’s team, forwards Ryan Norman and Colt Conrad, and defensemen Jordan Klehr and Collin Saccoman; and a number of top players left the U16 team.  That left the Sabre's Preps with 16 slots to fill and a hole at the goal tending position.  With most of last year's defense men also graduating or leaving the program, the Shattuck defense had to be re-built.  There was some question if any of the four players would return; most had opportunities to play elsewhere

The Sabre Preps added three new players.  Tyler Jutting, an outstanding sophomore defenseman for Mankato West last season, joins the Sabres along with forward Miroslav Mucha/Bytca, Slavia and goalie Frederic Foulem/Dieppe, NB.  Foulem is a senior this year and has committed to Harvard for the 2016-2017 season.  He has not been drafted by either the NAHL or USHL.

Shattuck's Jacob Paganelli scores on this Sabre breakaway to put Shattuck up 2-1 at the end of the first period. 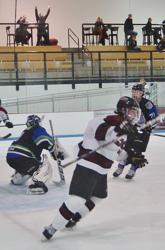 Love this picture. Jacob Paganelli (#9) has just scored and either his father or an exuberant Sabre fan celebrates with the big V in the background.

The Sabres opened their season losing to Mpls/St. Paul magazine 4-3 and to the TCF Bankers 7-4 in their first two games.  Shattuck beat Muscle Milk 4-1 in their third weekend game.  In their lost to the MSPers, the Sabre's fell behind 4-1 at the end of the second period when Mpls/St. Paul's defense Hank Sorenson scored and assisted on two goals to break the game open.  Shattuck came back behind the play of Joachim Weberg and Vincent de Mey to cut the score to 4-3.

Against the TCF Bankers, the Sabres held the lead for the first two periods before the Poehlings (with Derik Hammer), Casey Mittlestadt, and Peter Tufto took over in the third period to put the game away 7-4.  Ryan Norman, Colt Conrad, Pierce Crawford, and Vincent de Mey scored for the Sabres.  The Sabres were outshot 41-11 in the game.  Foulem was in the net for their 4-1 win over Muscle Milk.  He was in the net for the loss to Mpls St. Paul.  Ryan Norman got the hat trick against the MMs.  Norman scored four goals at the Showcase and is tied with Conrad for lead in Sabres scoring.

For Wednesday game with MAP, forwards Mucha and Mackie were scratches.  The Shattuck bench had to juggle lines during the game.  Drew Speckman started in the Sabres net.

Both teams came out skating hard and both teams had early successes.  The MAP defense played aggressive especially pinching at the Shattuck blue line to hold the play in the Shattuck zone.  Eventually the Sabres solved the MAP defense and created numerous 2-on-1 and 3-on-1 rushes.  Those rushes generated most of the Sabre scoring.

Halfway through the opening period, Shattuck scored the first goal of the game.  The Sabres’ Grant Mismash picked up a loose puck on the right side of the MAP goal and tried a wraparound shot.  Kuehmichel blocked the shot in the lower left corner sending the puck bouncing left.  Mismash retrieved the puck and attacked Kuehmichel immediately with a shot that Kuehmichel blocked with his upper body sending the puck vertical between Mismash and himself.  Mismash calmly let the puck fall while holding his position less than a foot in front of Kuehmichel and batted the puck into the net to give the Sabres a 1-0 lead.  It was a great play.  Jacob Paganelli/Verona NJ got the assist.  Three minutes later, Map scored their first goal of the game on a 2-on-1 rush with Jaremko scoring his ninth goal of the season to tie the game 1-1.  Marc Sullivan/Eden Prairie got the assist. 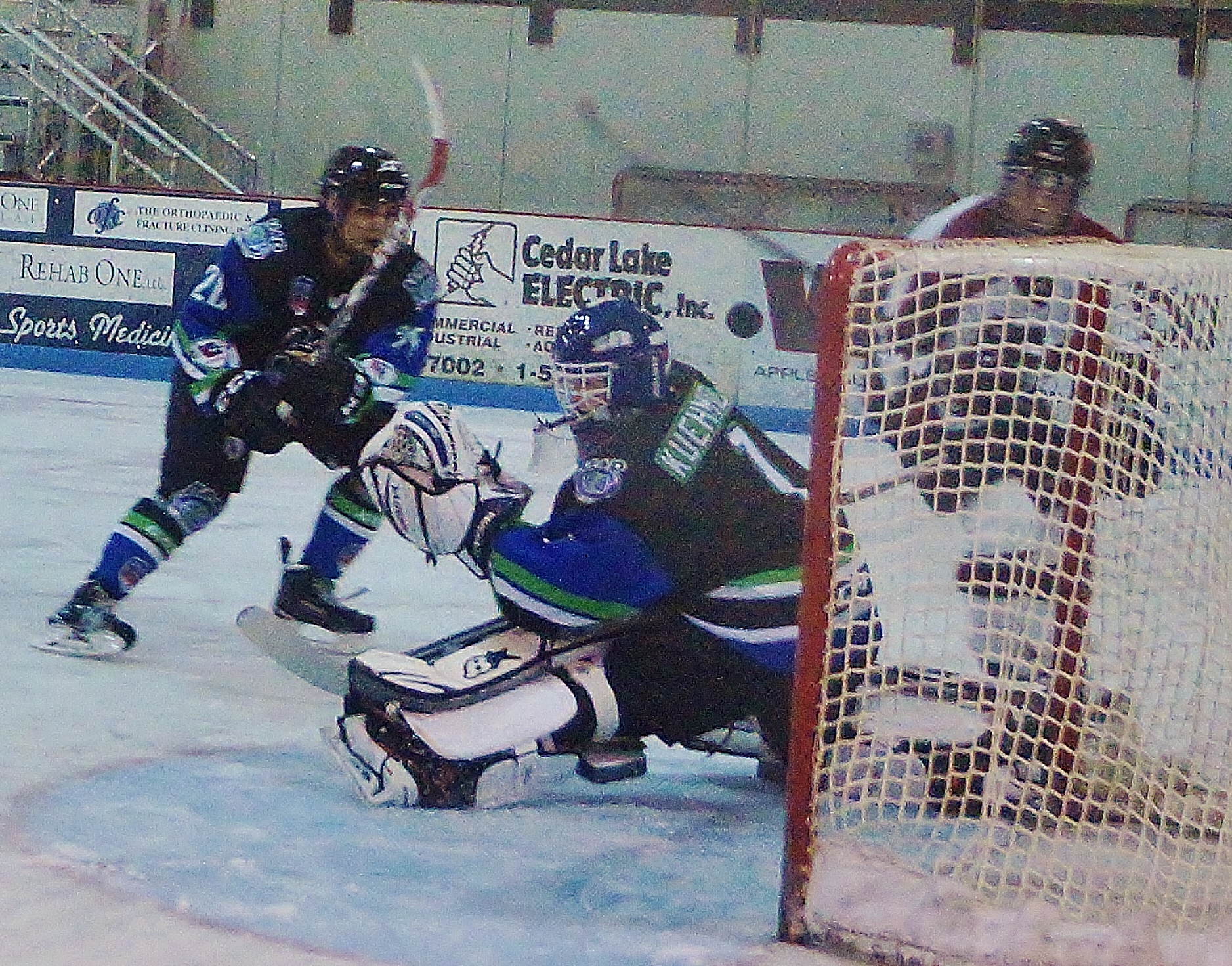 MAP still dominated the play over the next five minutes keeping the puck low in the Sabre’s zone, but could not beat Speckman.  With 5 minutes left in the opening period, Shattuck beat the MAP defense in the neutral zone.  Paganelli ended up with a clear breakaway coming down the slot and beat Kuehmichel with a high shot to put Shattuck up 2-1.  It would be the first many breakaway shots that Kuehmichel would see in Wednesday’s game.  The first period ended with Shattuck leading 2-1.

The second period opened with a MAP score.  Three minutes into the period, Jaremko pushed a 10 foot pass to Enebak as the pair crossed the blue line.  The Shattuck defense had been drawn toward Jaremko and the pass opened a lane coming off the left boards.  Enebak beat Speckman on a hard shot to tie the game 2-2.  Jaremko and Lutz got the assists.

Then the game started to get physical with the Sabres having the size advantage.  They used it to create rushes on the MAP goal.  And it worked.  The Sabres’ Colt Conrad scored off a rush to put Shattuck up 3-2 five minutes into the second period.  Jordan Klehr and Joachim Weberg got the assists.  At that point, the game still hung in balance.  The Sabres were coming on strong, but the MAP defense was surviving, but they needed to survive the second period without another Sabre goal.  They didn’t.

With four minutes left in the period, the Sabres’ Scott Reedy and Liam Schioler broke free coming down the slot.  Reedy had the puck and the MAP defense was not there to pressure them.  Reedy slowed in the right slot and faked a pass to Schioler at the edge of the left crease getting the MAP goalie to move left.  Reedy then put the puck into the open right side to put Shattuck up 4-2.  That was the game.  The second period ended with the Sabres leading 4-2.  Vincent de Mey and Ryan Norman got the assists.  Reedy's move looked simple, but it was a clever move because he had the sense to slow and let Schioler get to the top of the crease.  The goalie had no choice.  If he didn't cover the weak side, Reedy would have gone there.

MAP came out in the third period re-grouped, and played hard pressuring the Shattuck goal but could not beat Speckman.  The Sabres scored twice more on breakaways.  Vincent de Mey scored the fifth goal with Connor Ford and Josh Maniscalo getting the assist; Weberg scored the final goal to end the game 6-2.  Conrad assisted on Weberg’s goal.  It was an entertaining game and as all Shattuck games are, there was no charge. 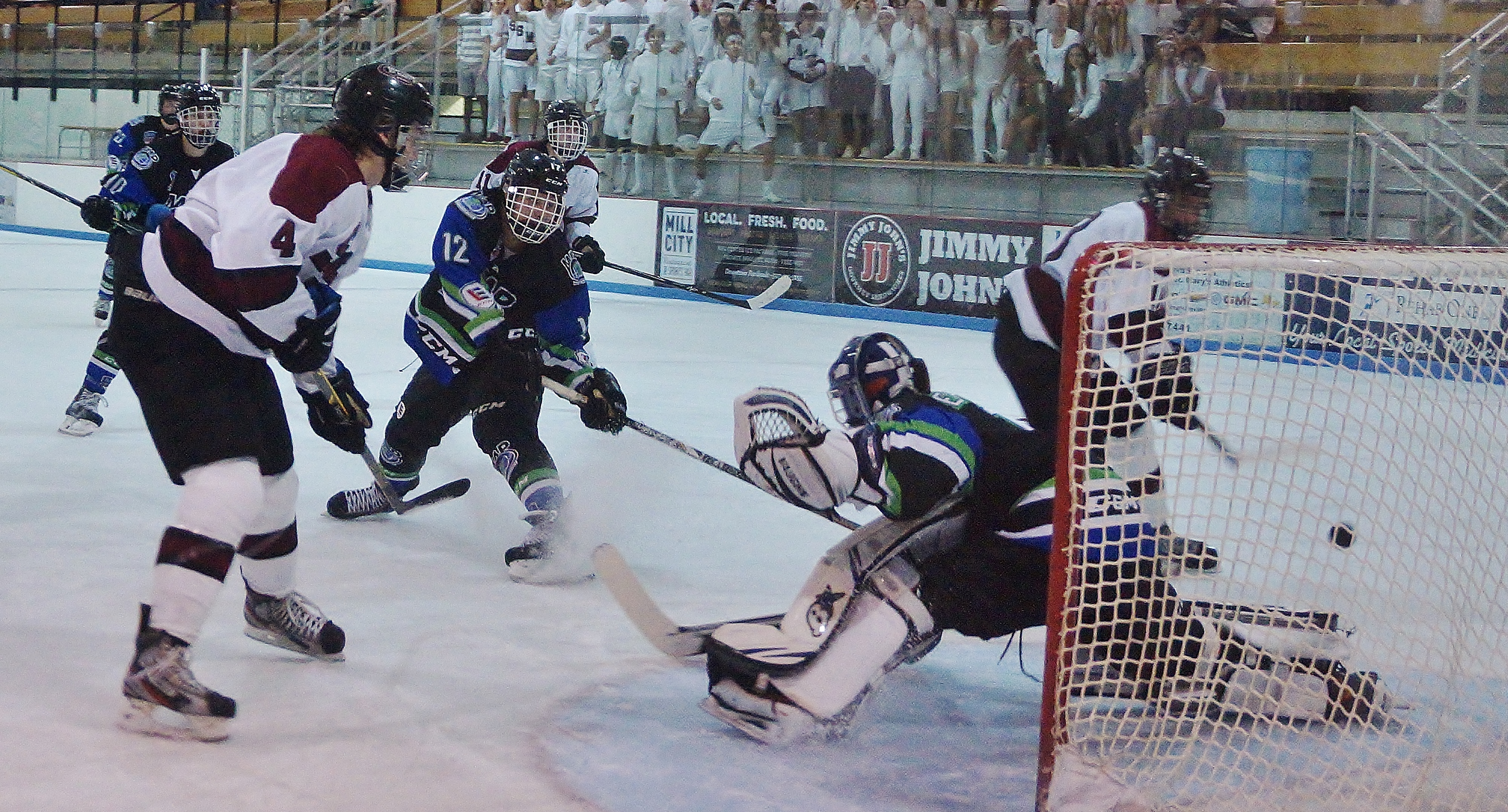 Shattuck's Scott Reedy scores to put the Preps up 4-2 against the MAP team in Wednesday's game. Reedy used Liam Schioler (#4) as a foil to open up the MAP net.

Team Wisconsin took first place in the UMHSEL league after week three by sweeping all three Showcase games to post 14 points for the year based on 7-2-0 league record.  TCF Bank beat Mpls/St. Paul Magazine 5-3 Tuesday in their first week four game to temporarily regain first place.  The Bankers have 16 points going into weekend play based on 7-1-2 record.

Shattuck draws Team Wisconsin and Starkey on the weekend.  The Team Wisconsin game (played at New Hope Saturday, September 27 at noon) is the game to see this weekend.  It could be a preview of the U18 Tier I national championship game next March.  Frederic Foulem will likely start for Shattuck against the Badgers; if he plays well Shattuck will make a run at the UMHSEL title this year despite playing six less games.  Team Wisconsin needs to beat Shattuck to keep their lead in the league.  After playing  Shattuck in what should be an intense physical game, Team Wisconsin takes the ice four hours later to play a dangerous Luther's team.

TCF Bank has already won one week four game and will be favored in their weekend games against Luther’s and Muscle Milk. 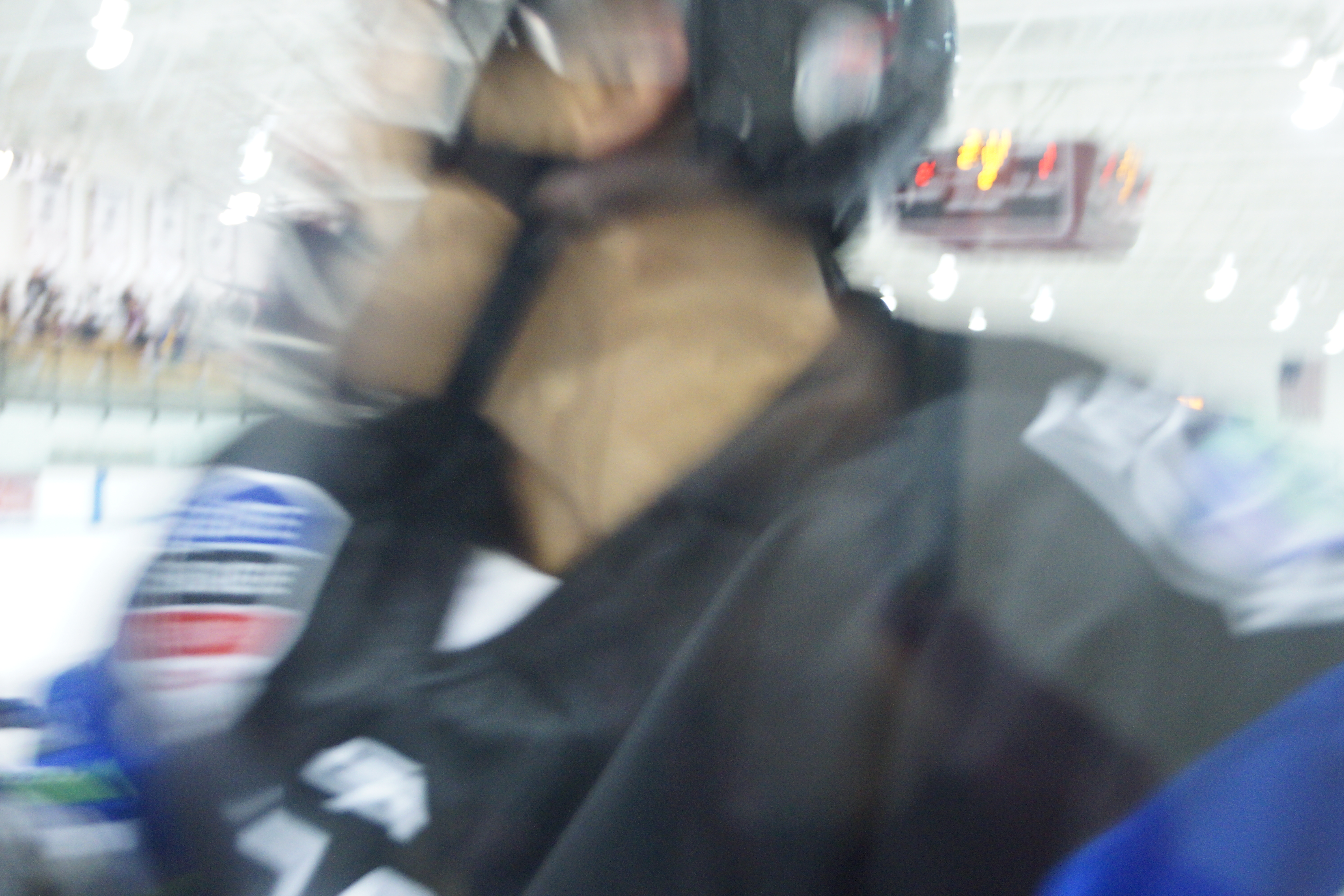 Henry Enebak/Lakeville North takes a hard hit that rattled the glass in the first period of MAP's game with Shattuck. This picture was taken just as Enebak was hit causing everything to move.