Recruits can now make official visits on or after Sept. 1 of their junior year, and athletic departments are not allowed to participate in unofficial visits prior to that date. 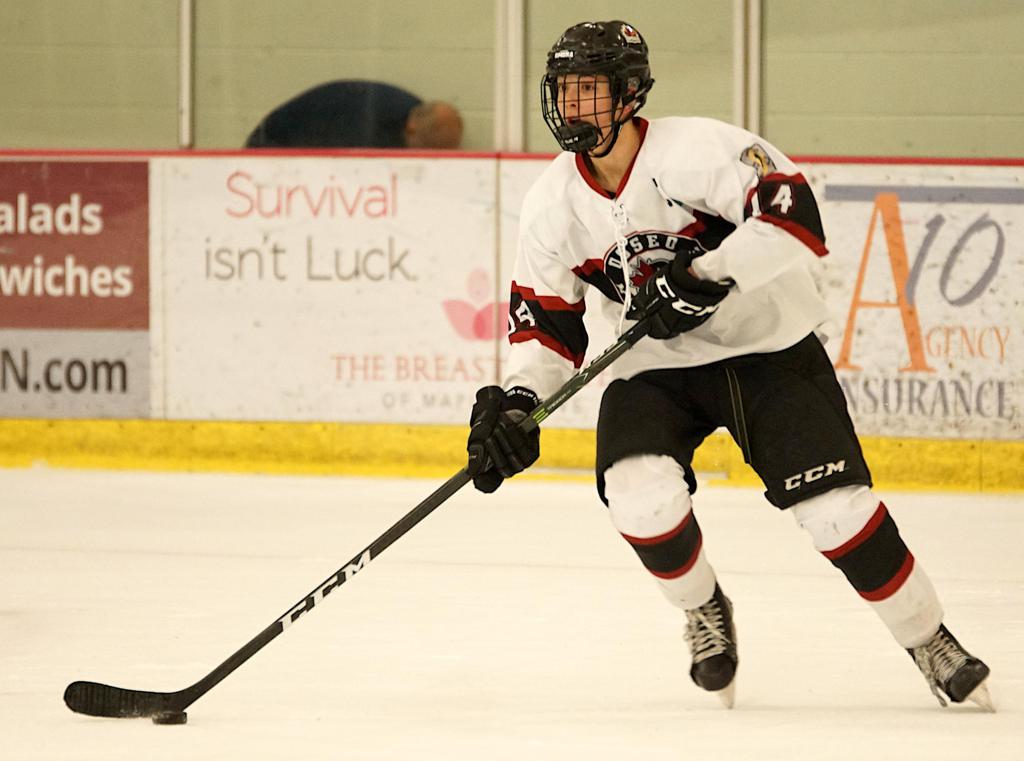 Athletic Depts. Out As Part of Unofficial Visits

In April, the NCAA took its first steps to curbing early commitments for hockey players.

Weeks later, the WHL and USHL staged their Bantam and Phase I drafts, selecting a total of 24 players combined that do not meet the new recruiting requirements for Division I ice hockey programs.

Additionally, recruits can now make official visits to a college or university on or after Sept. 1 of their junior year, as opposed to the first day of classes of the recruit’s senior year.

The Student-Athlete Advisory Committee laid the groundwork for the changes in partnership with the Student-Athlete Experience Committee, relying on feedback and testimonials from student-athletes, coaches, athletic directors, and compliance administrators, according to the NCAA’s initial article about the changes.

Although the recruiting changes directly and indelibly alter the Division I ice hockey landscape, the roster of the Student-Athlete Advisory Committee features a staggering zero participants in men’s or women’s ice hockey. 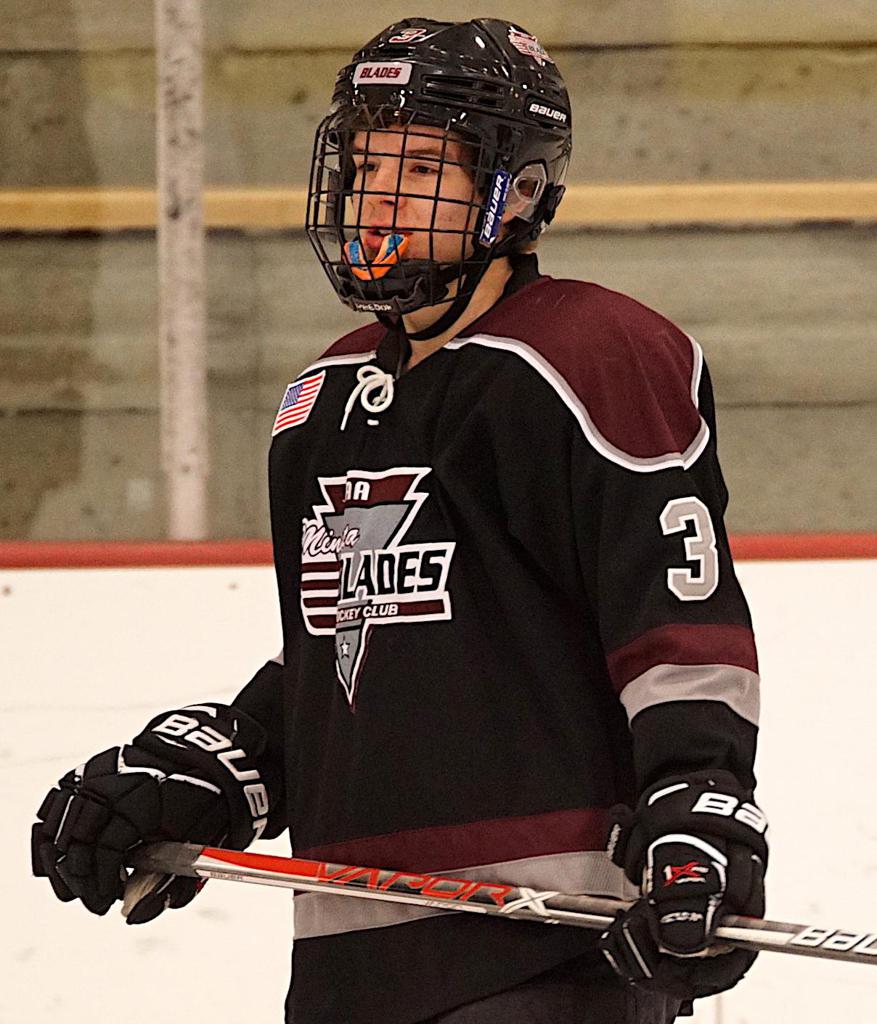 Owen Gallatin committed to Minnesota-Duluth during his freshman season at White Bear Lake.

“I think everyone is trying to slow down the process a bit,” newly minted St. Cloud State head coach Brett Larson said of the changes. “It’s hard to tell what the impact will be.”

Larson added that eliminating athletic involvement during the unofficial visits could hamper a school’s influence. “It was always nice to be able to get kids on your campus to get a feel for the school and program,” Larson said.

Football and basketball, the two highest-grossing NCAA sports, follow their own regulations.

Players to have already been in contact with a program before Sept. 1 of their junior year may continue to do so because initial contact was made before the rules went into effect. 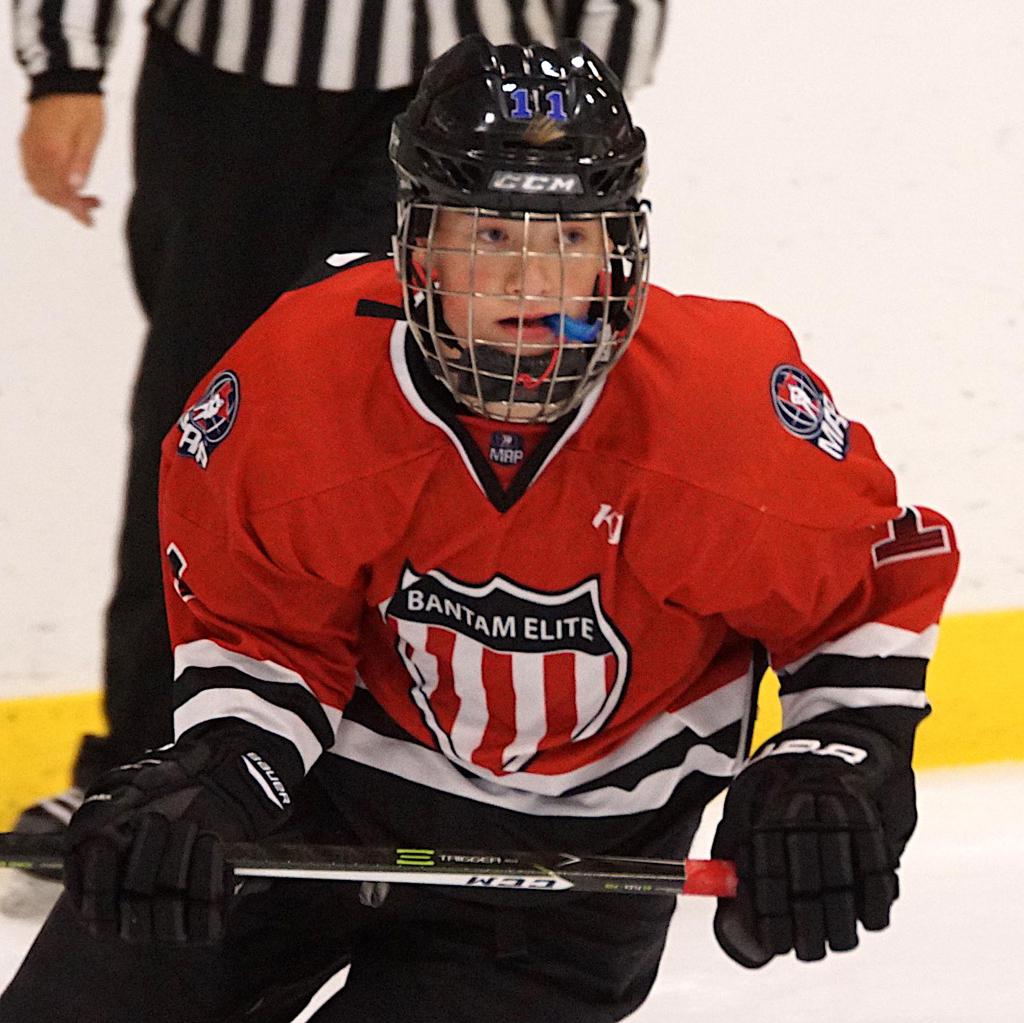 Minnesota commit Chaz Lucius is one of the most high-profile early commits in the country.

The Art Of Interpretation

As with any NCAA legislation, there will be a portion of the college hockey population that will find ways around the new rules and regulations.

Programs can tout that they have had contact with a player before the rules went into effect, players with connected parents can bump into members of the program at any rink, programs may even have influence in which Student Ambassador leads an under-aged player's unofficial visit. If NCAA history has taught us anything, from UCLA's Sam Gilbert to SMU's Sherwood Blount, it's that rogue boosters and alumni operate in their own stratosphere when it comes to indirect (or direct) recruiting.

By eliminating the athletic department's involvement in early unofficial visits (which no matter your feeling on early commitments is at least a straight line from family/player to coaches/administrators), the NCAA has opened the door for more involvement from "family advisors" and third-party operators. When the line of communication between schools and recruits is littered with added language, there is considerably more room for interpretation.

The driving force behind early commitments to Division I hockey programs is two-fold;

One, early recruiting is becoming commonplace across the collegiate sports universe.

Two, NCAA ice hockey must battle Canadian Major Junior leagues for players, a tug-of-war for talent that hinders virtually no other NCAA sport (other than European basketball on a microscopic scale). With the WHL, OHL, QMJHL in the market for players, college programs are forced to establish a tangible relationship with a player and his or her family early on in the recruiting process.

This legislation is a godsend for the NCAA. It can claim to be cracking down on "unsavory" early recruiting while blissfully pretending to be navigating the murky waters of the bottomless money-pits of Division I football and basketball.

The new regulations handicap a sport the NCAA does not have a comparatively vested financial interest in, and were implemented by a committee that had no representation from college hockey players.

What could possibly go wrong? 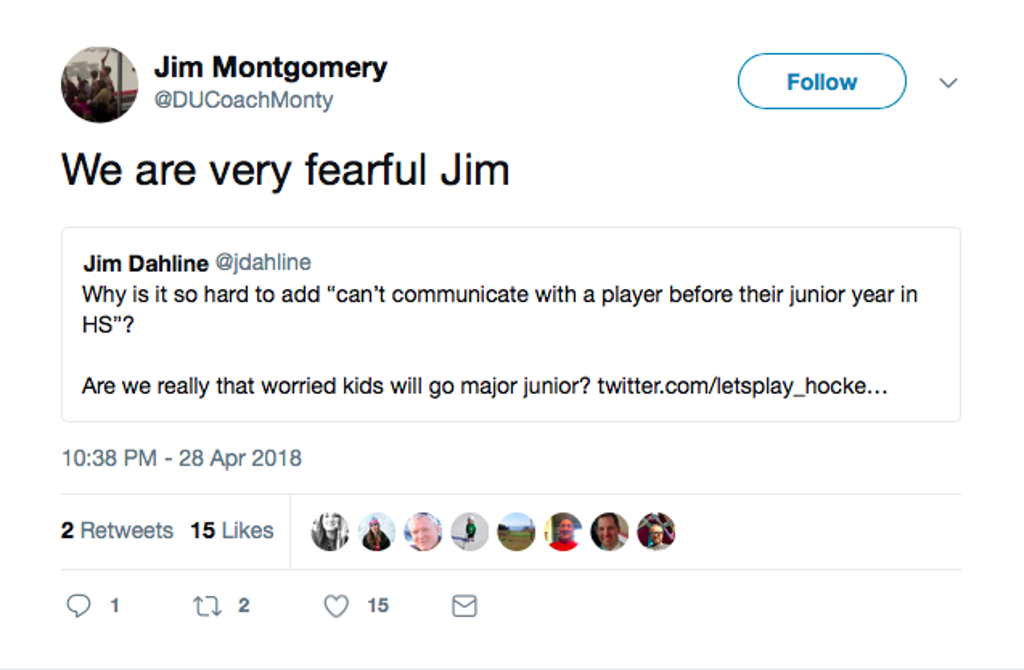 A screenshot of a Tweet by former Denver head coach Jim Montgomery highlights the uneasy feelings of college coaches toward Canadian junior leagues.