It's Not (Just) The Breakout

The Complicated Science of Zone Escape

Losing is emotionally painful. It is that way because, when we lose, we fail to achieve our goals. We invested effort into those goals, and those efforts failed to pay off. How do we cope with situations like that?

We know we don't want to have the same outcome next time and believe that we can avoid that not-so-pleasant future outcome by explaining how it happened this time. If we can explain it, we can fix it. Usually, this last little bit of thinking is only true (if indeed it is true at all) for the coaching staff and the players. Fans and parents try to explain losses as well, but they have very little influence on trying to fix the issues. Still, we all do it. We take comfort in figuring out what went wrong.

With that in mind, let's think about ordinary things that go wrong in a loss. Sometimes it is just bad luck in a somewhat even game. That isn't the situation I want to consider here. I want to consider a scenario where the other team outshoots your team badly. In that type of game, you usually are spending a lot of time in your end. We all know that too much time spent in your zone doesn't indicate success.

That leads to an easy chain of logic in the direction of how to fix it. The thinking goes, "We needed to get out of our end sooner. The breakout wasn't working." Seems pretty straightforward. What could be more apparent, right? And, yet, I am here to say that it isn't.

The thinking isn't deep enough. "We are having trouble getting out of our zone; therefore, we need to work on the breakout," leaves one crucial question unanswered. "Why wasn't the breakout working? Why were we unable to get out of the zone?"

In a breakout, what we are looking for is the best-case scenario. That scenario is a zone exit with control. The controlled breakout is much better than the options where you exit the zone without possession. Most of the time, when you give up control to get a zone exit, the other team gets another crack at possessing the puck in your end and generating scoring chances. Instead, it is the exit with control of possession that is the play that, if made consistently, gives your team a significantly better chance to win.

Further, the most common breakout drills in practice are based around a "puck retrieval" situation for the defense. These mostly happen when the other team is dumping the puck in behind your team's defenders. So, when we do the breakout in practice, we are working on getting the puck out with control off of a dump in. A dump-in is a pretty specific scenario. Does it solve the problem? Is the other team dumping it in a lot in games where you are spending a lot of time in your end?

In most cases, no. To make the difference in a game where you are getting it taken to you, what you want to stop seeing is situations where the other team has extended possession in your zone. You want to break those up by getting a zone exit. It's a different type of play than how 90% of all breakout drills are designed to work. These exits can happen after a missed shot or a rebound that comes to one of the players on your team, but this isn't ideal either. You aren't looking to give up a shot in order to get a zone exit. Instead, you want to create a turnover. 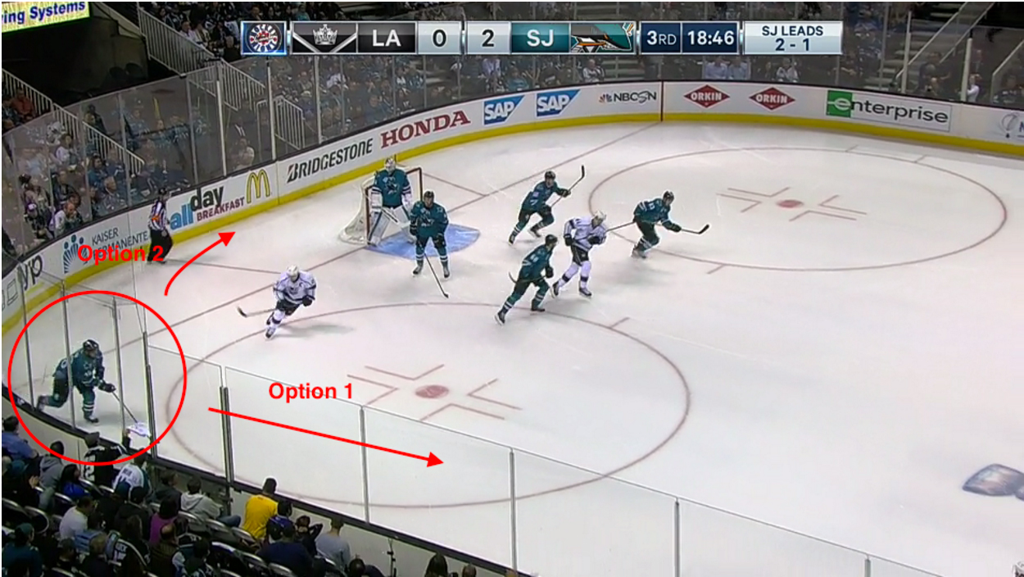 So what needs to be worked on to stop the onslaught? The answer is bad news because it is hard and not fun to work on in practice. To create turnovers when the other team is pressing you in your defensive zone, your team needs to improve at defensive zone coverage. You need to take away options, time, and space from the other team when they are in your zone. This will cause them to make more risky plays, creating turnovers.

Ok, now imagine we have forced the opposition to turn the puck over. How do we get out of the zone? Getting the puck off of a turnover in the D zone looks very different from a puck retrieval situation from a dump-in. It encompasses a wide range of possibilities of where the player on your team may get the puck and how much pressure they may be facing.

One key though is that it usually is not a good option to go back behind the goal line to initiate the classic first-pass on a breakout to a wing along the boards near a hash mark. More often, the player who gains the puck either has an easy lane or pass to exit the zone (Great! See Option 1 above) or is under pressure and has to work to create some time and space. While earning time and space, they evaluate options including "safe" passes (remember we need to keep the puck out of danger areas).

Meanwhile, teammates need to put in the work to get into position for these safe passes. However, since this play doesn't include the "usual" breakout scheme of working behind the goal line to start the play, players have to figure out how to do this on the fly. The good news is that the same support concepts that players work on as a part of the usual breakout (or neutral zone regroup) play should help them figure out how to support their teammate here.

So, to get more zone exits in games like these (actually, it is better to say "to get zone exits earlier in the other teams' offensive zone possessions") teams don't need to work on the usual breakout. Instead, they need to work more on D zone coverage and general skills about how to support teammates improvisationally in plays that cannot be correctly simulated in practice. This is because there are just too many ways these turnovers can happen in games to cover all scenarios in controlled practices.

Next time you are trying to explain a loss, and the breakout comes up, consider the following question: "How many times did we even touch the puck when we needed to get out of our zone?" Or consider, "how much time and space did we have when we did touch the puck in our end?" Usually, the answers to these questions will point the way to the problem a lot better than just looking at the breakout itself. 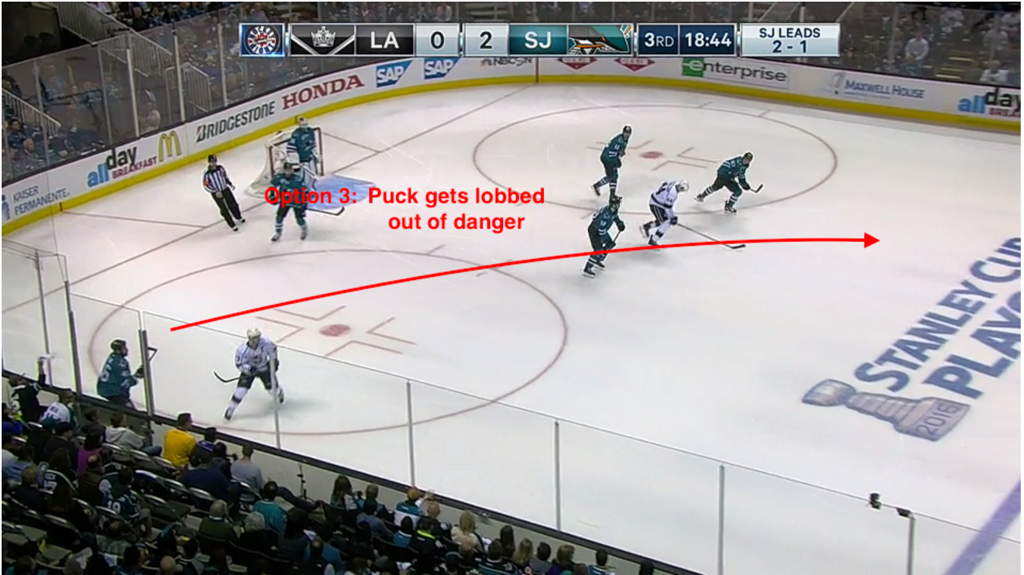