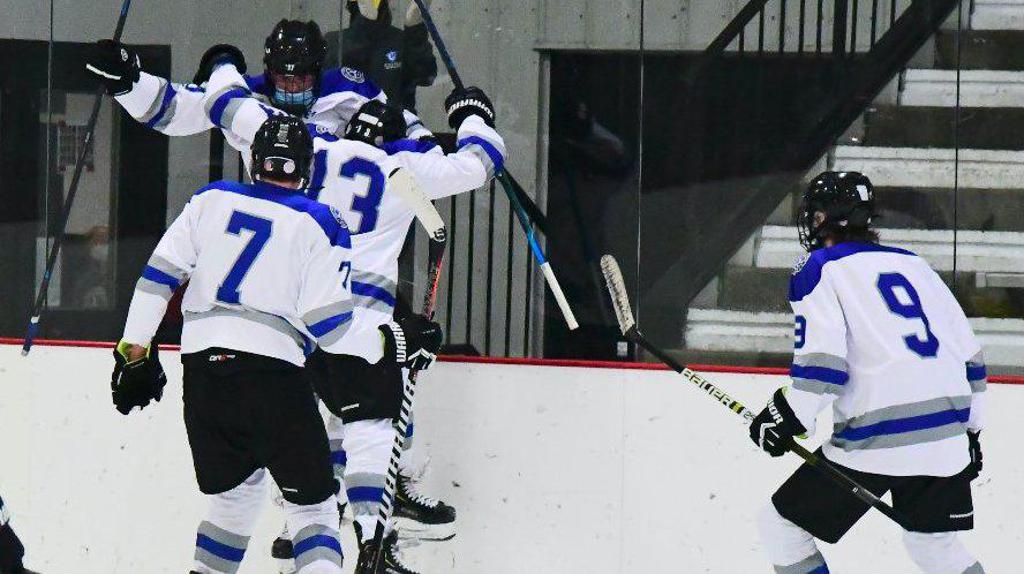 WINONA, MN (February 24, 2021) – Cotter Schools, of Winona, MN announced today that it has commenced the first season of its boys' high school hockey team. Cotter, a private Catholic school serving 460 students in grades 5-12 has educated generations of area students for more than a century. Now they are venturing into the sport of hockey with hopes of putting the school on the map as a destination for student athletes wanting a strong academic experience and athletic opportunities.

In a time where many high school hockey programs are consolidating with neighboring schools, the students and parents at Cotter wanted their own identity, one that matched the founding principles of the school. For many years Cotter had a strong hockey program but most recently it has participated in a co-op team with Winona High School.

"It didn't surprise me that these students wanted to do all they could to create their own identity in the game of hockey," said Cotter President Sister Judith Schaefer. "The word "can't" isn't in our vocabulary at Cotter. We do things differently here. It's the Cotter way."

Plans were set in motion about two years ago when a group of parents and boosters decided the time was right to form a Cotter Rambler Hockey Team. And while the team only has 10 players, and they must borrow goalies from their opponent, the foundation is being laid for a program that has very high aspirations.

"We are playing a junior varsity schedule this year with the intentions of playing at the varsity level next season," said Marie Barrientos, Interim Athletic Director. "It's very exciting to see our boys' step onto the ice in their Cotter hockey jerseys. We know that this is just the start of something wonderful."

At the helm for the Ramblers is veteran coach Martin Raymond who has more than 25 years of coaching experience around the globe. Raymond said he was drawn to Cotter because of the school family and the potential to build a strong program from the bottom up.

"It is a big challenge, but also an honor to start a program," said Raymond. "We are a small team in terms of numbers, but our work ethic and commitment are second to none. We hope to build this team into a contender in a short amount of time."

For players and families from Cotter the ability to revive the hockey program and add to the athletic lore of the school was important.

Cotter Hockey parent Mike Slaggie said that giving hockey players from Cotter their own identity was important to parents, boosters, school officials, and most importantly, the players, including his son Alex, a freshman and third-generation Cotter student.

"It is an ambitious undertaking, especially in a pandemic," he said. "It has been so rewarding to see our players represent our school. It is meaningful to know these kids are taking pride in the fact they are playing for Cotter and all of the tradition and excellence the school stands for."

The effort to start Cotter's own team was a grassroots approach. Careful consideration was made to hold true to Cotter's mission.

"This is a great time to be a part of the Cotter family," said Slaggie. "The addition of a hockey team goes hand-in-hand with other enhancements happening on campus. The time was just right."

With plans to welcome students in grades K-12 soon, new dormitory facilities, $20 million in classroom renovations and a 30-year-old international boarding program, Cotter Hockey hopes to attract players from the local area and abroad to solidify its fledgling hockey program.

For player Ashur Rouleau, who joined the team in January, becoming a part of the Cotter family is a hockey dream come true.

"It is a great program full of hard-working players and coaches willing to push the players to their full potential," he said. "The team is awesome, and we all get along great. Support by the parents and Cotter community has been great as well and I look forward to being a part of the program in the future"

Even in its' infancy, the Cotter hockey team is making its mark.

"We are not judging this year by wins and losses," said Coach Raymond. "We are working harder and harder each day to build for the future."

Even the state's highest-level team, the Minnesota Wild, has taken notice of the Cotter Ramblers. The team was asked recently to present a Cotter hockey sweater to the Wild so it can be displayed in the Xcel Energy Center concourse with every other boy's and girl's hockey team in Minnesota.

"This truly is a thrilling time to be a part of this school," said Sister Schaefer. "I just love watching our boys play and give everything they have playing a sport they love. My hopes are that they have a great experience and that I can someday ride on the Zamboni."