A deep crop of seeded teams should make for an entertaining few days in St. Paul.

We’ve made it. Despite a strange, taxing season that had a constant fear of virus shutdown looming over it, it’s Tourney time, and we’ll have full championship brackets featuring some of the best teams in each class. For TV viewers across the state and the lucky few who make it in the arena, it’s time to kick back and watch some hockey. Here are some storylines to watch. 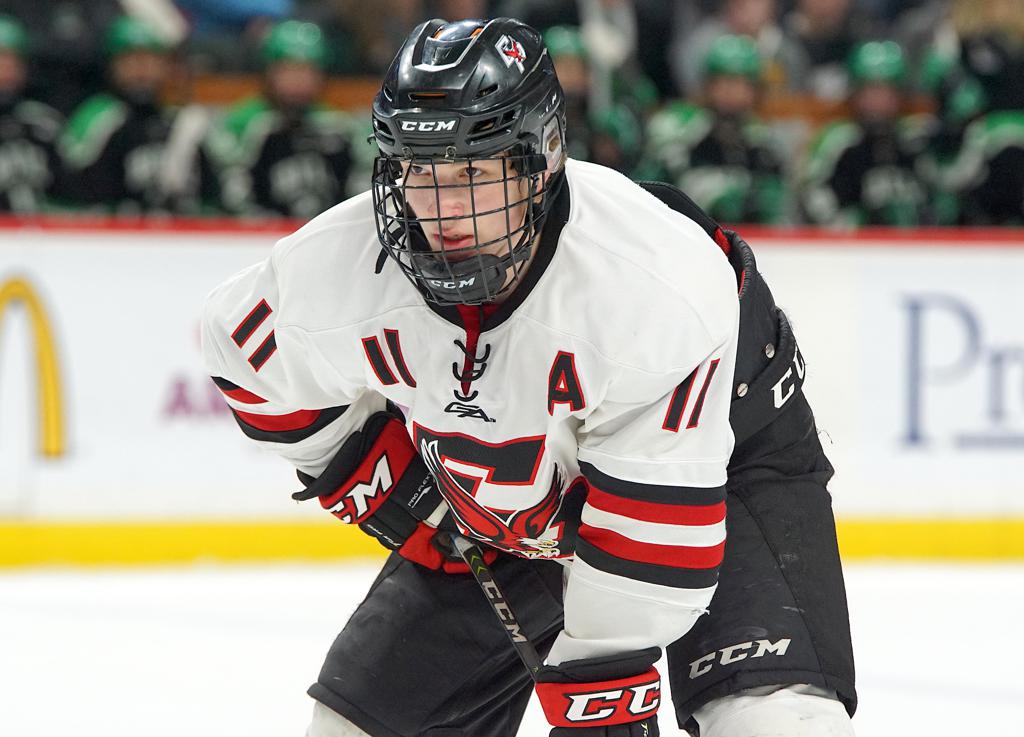 Carter Batchelder and the Eden Prairie Eagles hold the No. 1 seed in the Class AA field.

There are some good stylistic contrasts in the AA field this season. Wayzata and Hill-Murray, who meet in the first round, are defensive stalwarts with great systems play and some of the cleanest, most reliable breakouts you’ll ever see. Eden Prairie and St. Thomas Academy, who have the primetime slot, are on the other end of the spectrum, with the machine of Eden Prairie’s top unit (Carter Batchelder, Jackson Blake, Drew Holt, Luke Mittelstadt, Mason Langenbrunner) going up against Jackson Hallum and the Cadets’ potent attack. The stylistic collision happens in the first round in the nightcap between high-flying Maple Grove, led by Mr. Hockey contender Kyle Kukkonen and offensive defenseman Henry Nelson, and an Andover team that locked down in the 7AA final against Grand Rapids and has just enough scoring power to make things thorny, courtesy of Garrett Schifsky. Sooner or later, these contrasts will be on full display.

None of the top four seeds in AA have safe first-round games, and we could argue about the seeding all day. Still, Hill-Murray, Lakeville South, Eden Prairie, and Maple Grove are pretty clearly the top four coming in, and there’s no shortage of intrigue if they do all advance. These Eden Prairie and Maple Grove groups had an epic rivalry up through the youth ranks, and while some of the faces have changed, a potential semifinal there would be a hot ticket (if there were, in fact, many tickets being sold). For all the hype, Maple Grove has still never seen Friday at the X. Eden Prairie may be under the most pressure to win as two-time defending runners-up with a senior-heavy group in the final year of the very successful but thus far title-free seven-year Mittelstadt family era. Lakeville South, among the favorites for the first time ever, has something to prove as the relative newcomer to this group. Then, there are the defending champs from Hill-Murray, perhaps less dynamic offensively than a season ago but looking like one of the most impenetrable defenses in recent memory.

Out of the bubble

While the top AA teams weren’t quite as limited as Gentry or Hermantown, several teams were constrained to conference-only schedules. We still have little sense of just how good Lakeville South and Maple Grove are, since they’ve played no one of note outside their conferences, even in the playoffs—save for each other, that is. Andover’s mild upset of Grand Rapids seemed about in line with what we expected of the Huskies, but isn’t overly telling, either. The seeding suggests the other AA coaches had little respect for those limited schedules, and the Cougars and Crimson may come in with some chips on their shoulders based on how they were ranked.

Vastly diminished fan bases, dressing before entering the arena, a weird Thursday off day, no consolation bracket, the looming threat of exposure or a positive test: this is a very different sort of State Tournament. Does it all affect anyone, and who handles it best? 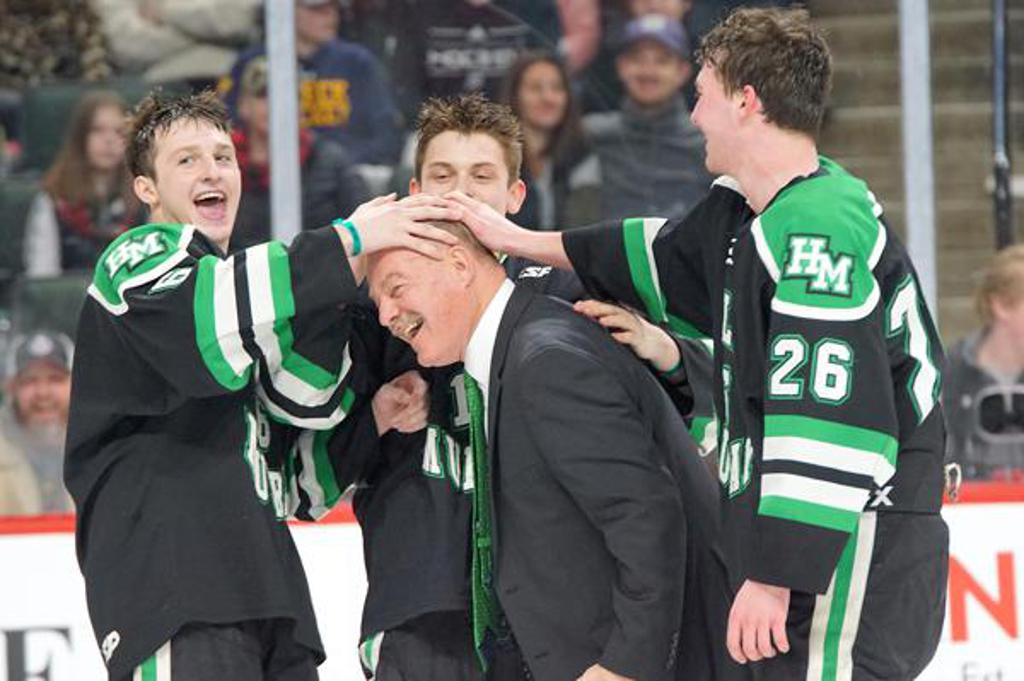 The Trojans emerged out of the 6AA meat grinder with their characteristic stout play in all zones. This team has more firepower than some past Wayzata editions, as Jake Schneider (12) and Gavin O’Connell (18) give them some legitimate scoring punch, and Carson Peters (25) is a very productive defenseman in this system. As usual, they have strong, steady depth, and sophomore goaltender Will Ingemann (1) has proven equal to the task.

The Trojans' run through 6AA suggests they can cause fits for anyone, though Hill may be a tough matchup in that regard, given the Pioneers’ own strong discipline. The Trojans will undoubtedly miss the offensive that Jake Keller brings to the lineup. Keller suffered a broken collarbone in the section final and will not suit up for the tournament.

The Pioneers have suffocated most of their opponents this season, allowing just 21 goals in 20 games. Unsurprisingly, their two leaders are defensemen: Mr. Hockey finalist Joe Palodichuk (2) and Matthew Fleischhacker (11). Offensively, it’s scoring by committee; junior Dylan Godbout (17) is the flashiest of the bunch, but there are just a bunch of reliable forwards here, including Max Zupfer (18), Jared Jensen (12), and Axel Begley.

Nick Erickson (1) has been rock-solid in goal, and this team’s breakouts and lack of mistakes had them playing arguably the best hockey of anyone down the stretch. The one lingering concern is an offensive power outage afflicting them at the worst possible time.

State appearances: 18 (three in a row)

The Spuds turned a rebuild into a reload: despite being the youngest team in the field, they came on strong toward the end and marched past Roseau to retain the 8AA title.

Max Dronen (26) is the senior leader of the squad, and Harper Bentz (19) is the most prolific of the sophomores, with Gavin Lindberg (3) and Aaron Reierson (22) next in line among forwards for total points. Joe Gramer (23), one of several players with familiar last names to those who have followed the Spuds over the years, is their next star on defense.

Senior Will Kunka (30) put up strong numbers in goal. While they have been playing well lately, their regular-season games against Tourney entrants suggest they’ll need to step it up a notch to have any success here.

State appearances: 5 (three in a row)

The Cougars are Class AA’s only undefeated team, though they are not without a couple of blemishes from ties in their South Suburban Conference schedule.

Their top line may be second only to Eden Prairie’s thanks to big man Cade Ahrenholz (19), tenacious junior Tanner Ludtke (4), and Cam Boche (9), who rode a senior year points explosion to Mr. Hockey finalist status. The two Jacks on defense, Jack Novak (14) and Jack Malinski (21), give them strong balance, and there’s plenty of depth, too, including sophomore star Ashton Dahms (22).

Cody Ticen (30) and Ethan Dahlmeir (35) have split time evenly in goal. There are still some questions here, given their schedule, especially with how they’ll hold up against a solid defensive squad in the semifinals, but the pieces are here for a deep run.

-The Cadets return to primetime at the X a year after upsetting top-seeded Andover. They face a very different opponent this time around, but are also a very different, far more offense-oriented team themselves. Mr. Hockey finalist and Vegas Golden Knights third-rounder Jackson Hallum (15) is one of the state’s flashiest players, and he has a strong supporting cast in seniors Jared Wright (16) and Tanner Brouwer (8), juniors Tyler Grahme (9) and Max Nagel (7), and sophomore Tommy Cronin (14).

The ability of a fairly inexperienced defense in front of goaltender Carsten Lardy (1) to hold up under fire from several other great offenses will likely determine how far this team can go.

State appearances: 13 (three in a row)

The Eagles boast one of the most fearsome top units in recent memory. Seniors Drew Holt (8) and Mr. Hockey finalist Carter Batchelder (11) play alongside junior dynamo Jackson Blake (43) on a group with incredible playmaking ability. The star power on the defense is just as good, with Mr. Hockey finalist Luke Mittelstadt (27), draft pick Mason Langenbrunner (22), and the solid Kam Langefels (24) carrying the load. Their depth is not on the level of some of the other top teams here, though the lower lines have been doing enough for much of the season, with Riku Brown (21) adding some scoring heft.

Zach Hayes (30) will be in the spotlight in goal as the Eagles look to avenge their two straight championship game losses and win the title that has eluded them here in the 7-year Mittelstadt era.

State appearances: 2 (two in a row)

A season after coming in as the top seed and losing in the quarters, the Huskies return a bit more under the radar but capable of causing problems. They’re led by sniper Garrett Schifsky (17), the one real holdover from last season’s team, plus star sophomore Gavyn Thoreson (12) and Ethan Lindahl (26), while Weston Knox (24) leads the way defensively.

Will Larson (35) was a star in goal in sections. If they can keep up the strong defense that made their second Maple Grove game close and helped them upset Grand Rapids, they have a formula to make a run here. Maple Grove is the only team that has beaten them this season.

State appearances: 4 (two in a row)

-The Crimson waltzed through most of their conference-only schedule, save a loss to Lakeville South when the two filled an empty slot on their calendar late in the season; this was supposed to be our chance to test them, but with yet another conference opponent up first, that may have to wait for another round.

Kyle Kukkonen (9), who has put up 72 points in a shortened season, is among the Mr. Hockey frontrunners. Sam Jacobs (21), Landen Gunderson (17), and Chris Kernan (27) also put up video game numbers, and two-way defenseman Henry Nelson (12) gives them a second Mr. Hockey finalist. Four additional players recorded 20 or more points, showing off this group’s depth. Jack Wieneke (1), while not tested much this season, is a Brimsek finalist. Time to learn what this team is made of.