The biggest matchup of the weekend saw two top-five Big Ten teams square off, with the No. 2 ranked Minnesota Gophers (8-4) traveling to Ann Arbor to play the No. 3 ranked Michigan Wolverines (9-3).

Unfortunately, due to illness, multiple players could not suit up in this series, with Justen Close and Aaron Huglen missing for the Gophers and standout freshman Adam Fantilli missing for the Wolverines.

Rhett Pitlick sniped one home to start the scoring in the first frame before Dylan Duke added a power-play goal later in the period to even things up. In the second, still tied at 1-1, Rhett Pitlick added his second goal to retake the lead, with his previous Chaska High School teammate, Mike Koster, feeding him a beautiful backdoor pass. Dylan Duke then added his second goal of the night, batting the puck home in close on the power play. With eight minutes remaining in the period, Jimmy Snuggerud scored his ninth goal of the season to make it 3-2. Early in the third, after taking a five-minute major penalty earlier in the game, Logan Cooley redeemed himself, scoring off a one-timer to make it a two-goal lead. Luke Mittelstadt added a fifth insurance goal late in the game, scoring his first collegiate goal in the Gophers' 5-2 win.

Game two on Friday night was another high-scoring affair that saw the Gophers go into the first intermission up 2-0, with goals scored by Jackson LaCombe and Rhett Pitlick, his third of the weekend. The second period saw three goals scored, two by Jaxon Nelson of the Gophers and one by Dylan Duke, with Duke adding his fourth goal of the series eight minutes into the third, bringing the score to 4-2. Matthew Knies added a power-play goal a couple of minutes later to make it 5-2, with Mackie Samoskevich responding only 24 seconds later to bring the score to 5-3.

There would be no late comeback in this game, as Ryan Johnson added an empty net goal with a few minutes remaining, securing the 6-3 win and road sweep for the Gophers. Over the two nights, Owen Bartoszkiewicz saved 59 of 64 shots faced, improving his win-loss record to 3-0. The Gophers will again be on the road this week as they head to Arizona to square off against Arizona State on November 25th and 26th. 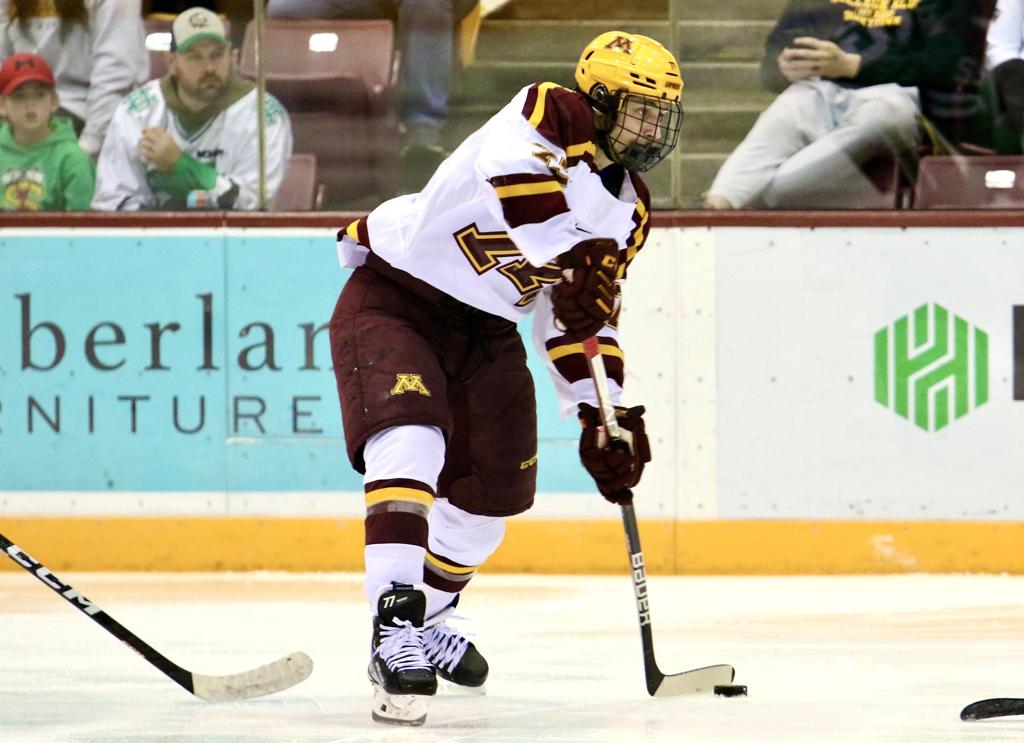 Will Hillman got the Mavericks on the board first, scoring off a rebound at the 6:16 minute mark of the first period. Mankato then doubled its lead almost halfway through the second, with Lucas Sowder tipping home a shot in front on the power play. The Wildcats then added a power play goal of their own to make it 2-1 before tying the game at 2-2, scoring with less than a minute remaining in the second period off an AJ Vanderbeck breakaway.

After all 17 shots faced were saved in the third period, the teams headed to overtime, where AJ Vanderbeck fired home a shot to claim two points for the Wildcats in the CCHA standings.

In game two, the Mavericks' goal-scoring leader, David Silye, started things off by putting home a power play goal less than three minutes into the game. Later in the period, Northern Michigan went on their first power play, where David Keefer scored to tie the game at 1-1. In a game with 16 penalties called, the Mavericks added another power-play goal early in the second to go up 2-1.

Cade Borchardt added to the Maverick lead a handful of minutes into the third, tallying his tenth point of the season. The game's final goal was an empty netter scored by Ryan Sandelin, securing the 4-1 win and the series split. With the win, Keenan Rancier improved his record to 4-3 when in net this season, saving 18 of 19 shots faced.

Still unranked and sitting at 6-6 on the season, the University of Minnesota Duluth traveled to Kalamazoo, MI, to play the Western Michigan Broncos (ranked No. 14 with a record of 8-5) in a two-game series.

Night one saw a flurry of goals in the first period, with three goals scored by each team. Two freshmen, Kyle Bettens and Cole Spicer, netted their first collegiate goals to put the Bulldogs up 2-0 before the Broncos scored three unanswered to make it 3-2. Ben Steeves then scored on the power play to retie the game, marking his seventh and team-leading goal of the season.

In the second, the Bulldogs took a 4-3 lead early through a Quinn Olson goal before the Broncos responded again, tying the game at 4-4. That score held until late in the game when Hermantown native, Darian Gotz, exited the penalty box with roughly a minute remaining and found himself on a breakaway where he beat the goaltender, scoring his first goal of the season and the vital game-winner.

Saturday's game saw another high-scoring affair, with Cole Spicer scoring his second goal in two nights to start things off. At the 11:38 minute mark, Zak Galambos scored from the point to tie the game at 1-1, but the Bulldogs still won the period, with Dominic James scoring with 1:30 remaining to retake the lead.

With less than two minutes remaining in the second, the Bulldogs made it 3-1, with Ben Steeves scoring off a rebound. The Broncos then tallied a goal with only seconds remaining in the period, which triggered a comeback, with Western Michigan adding three goals in the third period to win the game 5-3. In the loss, goaltender Matthew Thiessen saved 27 of 31 shots faced.

The Bulldogs will take the holiday week off before playing Colorado College at home the following weekend. 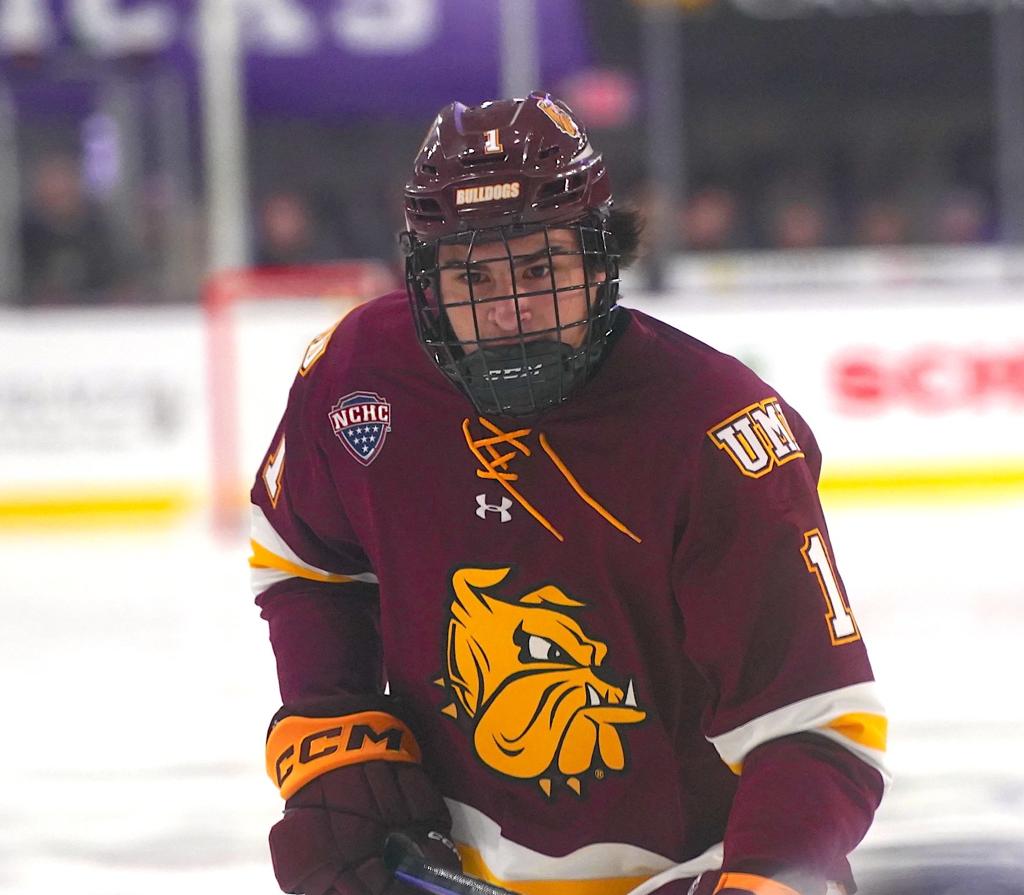 After a scoreless first period on Friday night that saw great play from both goaltenders, the Huskies ended the deadlock off a fluky goal, with Brendan Bushy shooting the puck down from his own defensive zone on the penalty kill and bouncing it past goaltender Kaidan Mbereko.

In the third, Tigers points leader Noah Laba scored five-and-a-half minutes into the period to tie the game at 1-1. With 3:32 remaining, the Huskies scored the go-ahead goal through Dylan Anhorn and then added an empty net goal to win 3-1. Goaltender Jaxon Castor made 27 saves in the game, improving to 5-2 in his seven starts this season.

The Huskies came out firing Saturday night, tallying three goals in the first period with goals scored by Jack Rogers, Josh Luedtke, and Grant Cruikshank. Recently returning to the lineup, Luedtke scored his first goal of the season after being out due to an injury for the month of October.

Three minutes into the second period, Zach Okabe scored to make it 4-0. Late in the game and still leading 4-0, Okabe added another goal, his eighth of the year, to help the team claim the 5-0 victory and come away with all six available points for the NCHC standings. Dominic Basse saved all 36 shots faced, recording his second shutout of the season while improving to a record of 6-1. 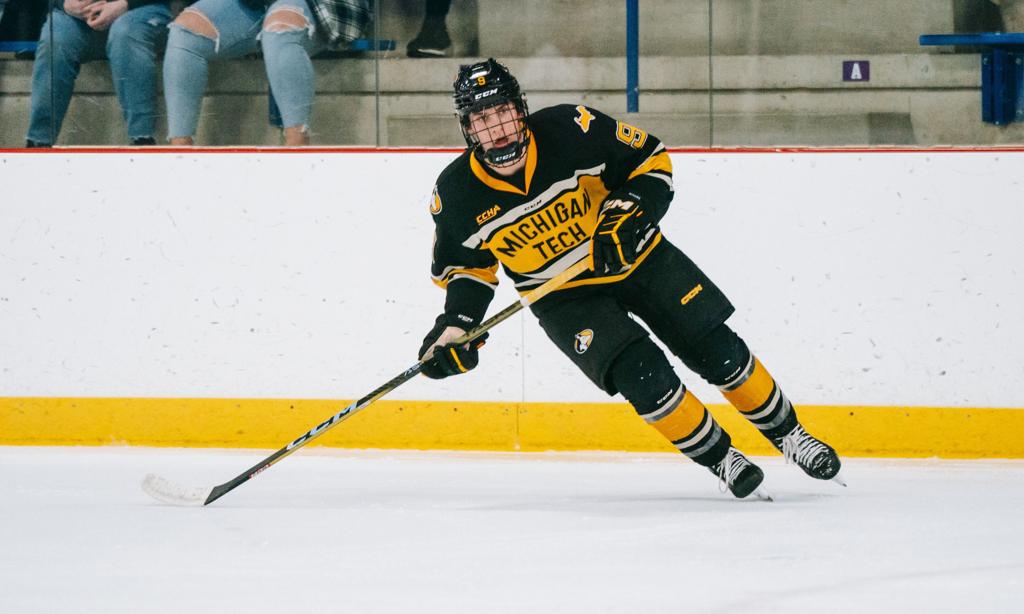 After four consecutive losses, the University of St. Thomas Tommies (2-10) hoped to right the ship at home against the Michigan Tech Huskies (6-3-2), but unfortunately, the Tommies fell short in both games.

Michigan Tech started the scoring in the first, going up 1-0 with two minutes remaining in the period before doubling their lead at the 13:04 minute mark of the second. Two minutes later, the Tommies responded, with Jarrett Lee scoring off a set-up from Josh Eernisse.

On the power play to close out the period, goalie Aaron Trotter caught the Huskies on a line change and played the puck up to Luke Manning for a breakaway, with Manning scoring to go into the break tied 2-2. In the third, the Huskies' Kyle Kukkonen tallied a power play goal four minutes into the period, and Michigan Tech did not look back, adding three more goals to win the game 6-2.

Junior defenseman, Brett Thorne, had a four-assist night for the Huskies, with goaltender Blake Pietila earning his seventh win of the season.

Game two saw a highly eventful first period, with five goals scored and six penalties. In a span of four minutes, the Huskies tallied the first three goals before taking a five-minute major penalty with 7:33 remaining in the period. That penalty helped the Tommies get back into it, with Luke Manning and Luc Laylin scoring twenty-three seconds apart to make 3-2.

Both teams then honed in their defense in the second, allowing zero goals. At the 12:33 minute mark of the third period, Tim Piechowski tied the game up at three off a nice tip in front.

The Tommies were given the opportunity to complete the comeback with a power play awarded late in the game. However, the Huskies found themselves on a 2-on-1, with Ryland Mosely scoring shorthanded to snatch the win and series sweep. 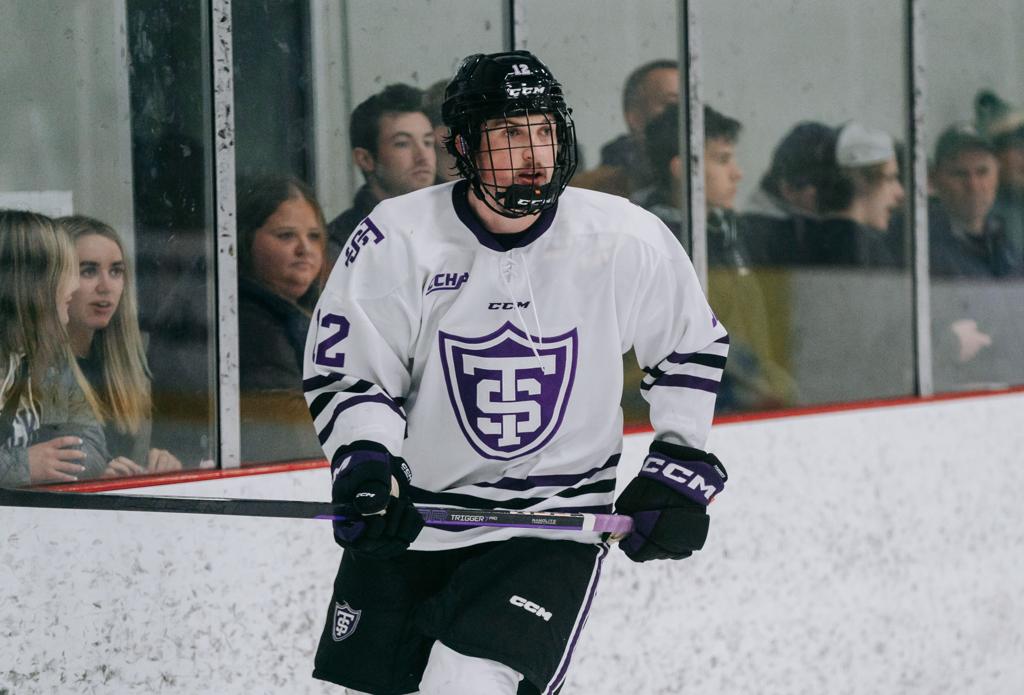