Recapping a wild weekend of college hockey in Minnesota.

After dropping one spot in the USCHO rankings to No. 11, Minnesota State Mankato (8-5-1) returned home to take on the Ferris State Bulldogs (4-6-2).

Game one Friday night saw the Bulldogs jump out to an early lead in the first, with goals scored by Tyler Schleppe and Ben Schultheis, his first goal of the season. In the second, the Mavericks went on to outshoot the Bulldogs by a 10-4 margin, but both goaltenders held firm, with Ferris State holding onto their 2-0 lead into the third period. Two minutes into the final frame, David Silye recorded his twelfth goal of the season on the power play, making it 2-1. Ferris State goaltender Noah Giesbrecht stopped everything else the Mavericks threw at him, saving 33 of 34 shots faced while helping his team earn the night one win.

The Mavericks came out firing Saturday night, scoring two quick goals less than three minutes into the first period, with the goals scored by two Minnesota natives, Ryan Sandelin and Adam Eisele. The Bulldogs closed out the period on a high note, scoring two late goals from Jason Brancheau and Andrew Noel to go into the first intermission tied at 2-2. Like Friday, the Mavericks dominated period two, outshooting the opponent 17-3 but could not retake the lead. With just under five minutes remaining in the third, the Bulldogs' Stepan Pokorny scored the go-ahead goal and ultimately the game-winner, with the Bulldogs claiming the 3-2 win.

The Mavericks outshot the Bulldogs 39-13 in game two, for a series total of 73-26, but still came away winless. This series sweep marks the first time the Mavericks were swept at home, dating back to October 9-10, 2015, when they were swept by Nebraska-Omaha.

Sitting firmly in the No. 3 spot in the rankings in back-to-back weeks, the St. Cloud State Huskies (11-3-0) squared off against the North Dakota Fighting Hawks (6-6-3) for two games at home.

Griffin Ness scored on North Dakota's first shot of the game a few minutes in, before St. Cloud tied the score at 1-1 at about the midway point of the period. Jackson Blake then tallied his ninth goal and eighteenth point of the season to put the Fighting Hawks ahead prior to the first intermission.

Ninety seconds into the second period, Jami Krannila scored to retie the game, and from that point forward, it was all St. Cloud. The Huskies added three more goals in the second, first from Grant Cruikshank shorthanded, then from Jack Peart, and finally, Veeti Miettinen scoring on the power play. Up 5-2 in the third, the Huskies' Jami Krannila and Kyler Kupka added two more goals in the final frame to beat North Dakota 7-2. Goaltender Jaxon Castor earned his sixth win of the season in net, making 30 saves for the Huskies.

Saturday's game followed a similar storyline to the night before, with North Dakota starting off the scoring in the first. After Matteo Costantini scored goal one, Grand Rapids native Gavin Hain scored to make it 2-0 North Dakota heading into the first intermission. Riese Gaber unleashed his powerful wrist shot on the power play to put the Fighting Hawks up 3-0 early in the period, but the Huskies responded, scoring six unanswered goals in back-to-back nights to defeat North Dakota 6-3. Brendan Bushy answered immediately after Gaber's goal before senior forward Zach Okabe recorded three consecutive goals for the natural hat trick, with the first goal coming late in the second and the next two early in the third. With the momentum strongly in their favor, the Huskies' Kyler Kupka added goal No. 5 before Jack Peart capped off the win with an empty net goal.

The last time the Huskies swept North Dakota was nine years ago in November 2013, with it being their first sweep at home against the Fighting Hawks since November 2001. 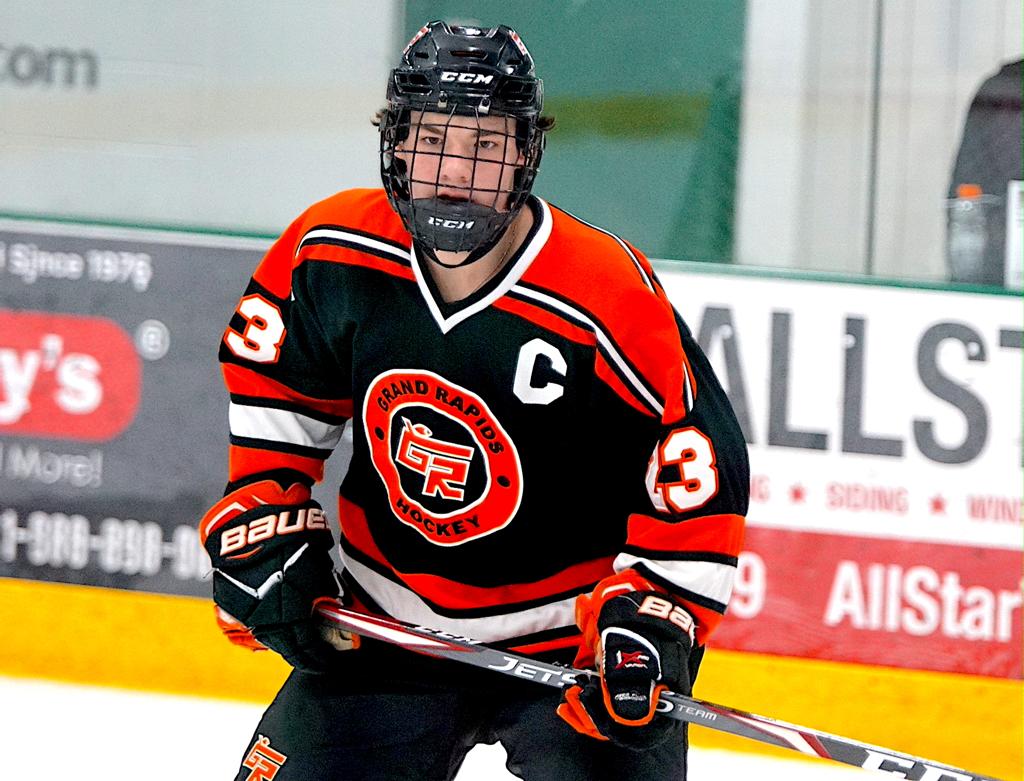 The No. 4 ranked Minnesota Golden Gophers (11-5-0) traveled to Michigan to battle the No. 13 ranked Michigan State Spartans (11-4-1). You would be hard-pressed to find many faults in how the Gophers played Friday night, with Logan Cooley starting off the scoring in period one and the team not looking back.

In period two, goaltender Justen Close saved all eight shots faced, with Rhett Pitlick scoring late in the period to make it 2-0, his fifth goal in the last five games.

The Gophers did not let up in the third, with Bryce Brodzinski scoring at the 11:26 minute mark to bring the lead to three before Matthew Knies made it 4-0 only a minute later. With one minute remaining in the final period, Logan Cooley recorded his second goal and third point of the night to cap off the 5-0 win. Justen Close turned away all 25 Michigan State shots, improving his season record to 9-5 with three shutouts.

The Gophers again started off the scoring in Saturday's game, with Jimmy Snuggerud scoring on a 2-on-0 breakaway for his eleventh goal of the season. With the score still sitting at 1-0 in the second, the Gophers ramped up their play, adding three goals in the period from Bryce Brodzinski, Jaxon Nelson, and Matthew Knies to make it 4-0 heading into the second intermission. The Spartans recorded their first goal of the series a bit over two minutes into the third before adding a second goal seven minutes later, bringing the score to 4-2. The Gophers soon regained their three-goal lead via a Mason Nevers goal before Brock Faber added a sixth goal with less than five minutes remaining, his third point of the night. The Spartans Jeremy Davidson added a late goal to close out the scoring, resulting in a 6-3 win for the Gophers and an important Big Ten sweep on the road.

The Gophers stayed out of the penalty box for the third straight game, something that Coach Bob Motzko will love to see. Minnesota will return home after three consecutive road series to take on their border rivals, the Wisconsin Badgers. 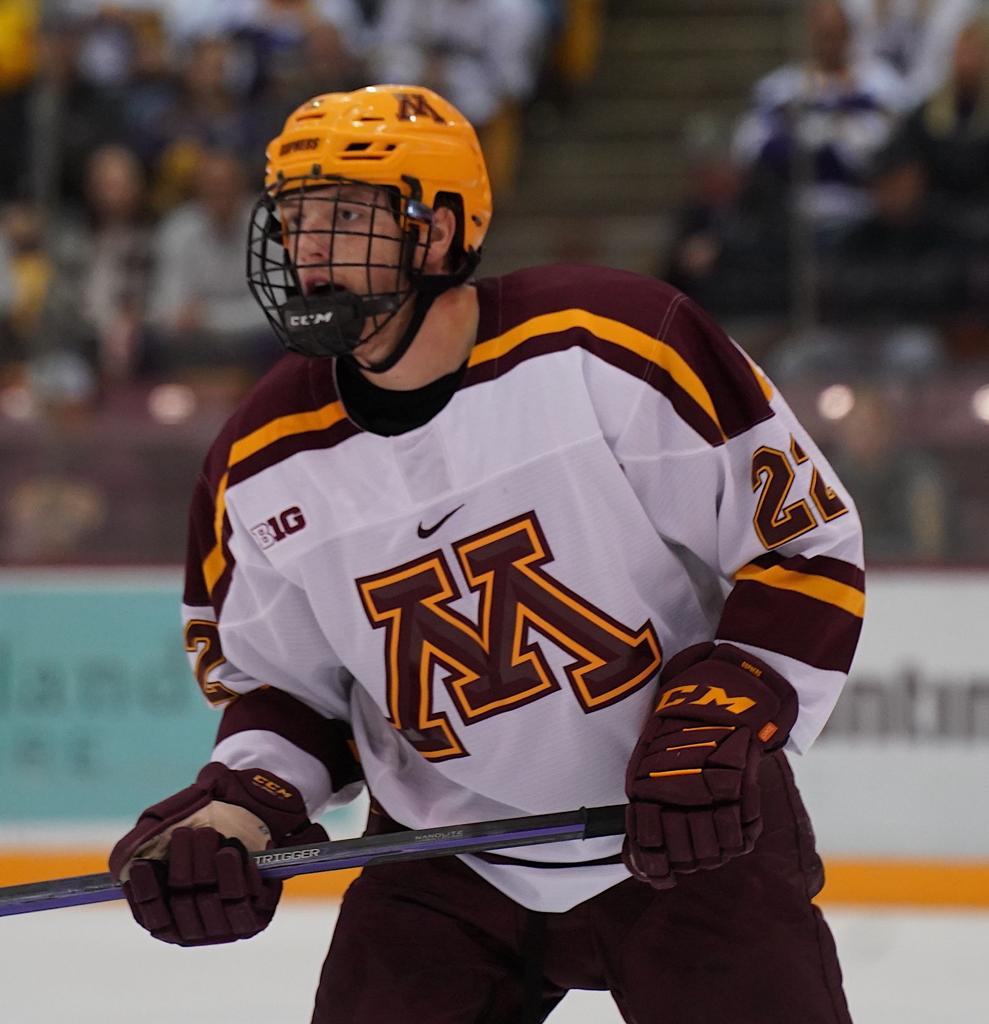 Bryce Brodzinski scored in each game this weekend for Minnesota.

Friday's game saw the lone first-period goal go to St. Thomas, with Nolan Sawchuk tallying his first goal of the season. The Beavers responded in the second, scoring three unanswered goals via Adam Flammang, Jackson Jutting, and Alexander Lundman to go up 3-1. The Tommies retied the game late in the period, with Mack Byers scoring back-to-back goals in a span of 1:08 to go into the second intermission tied at 3-3. The Beavers scored 27 seconds into the third before Josh Eernisse answered for the Tommies, scoring on the power play to tie the game at 4-4. Alexander Lundman then tallied his second of the night to put the Beavers up 5-4, and the team held on, adding an empty net goal to win 6-4. The Beavers' Mattias Scholl earned the win in net, saving 20 shots and improving to 4-2-3 in his starts this season.

After the 10-goal thriller the night prior, game two started slower, with the first goal of the game coming at the 6:35 minute mark of the second period when Mack Byers scored off a nice feed from Ryan O'Neill. The Beavers started the third period on the power play, where Will Zmolek scored his second of the season to tie the game at 1-1. Bemidji State's Ross Armour scored the go-ahead goal with 6:21 remaining, but the home team could not hold on late, with Mack Byers scoring his fourth goal of the series to retie the game with 1:20 remaining.

After a scoreless overtime, the Beavers won the shootout to claim the extra point for the CCHA standings. Both teams will continue CCHA play at home next weekend, with St. Thomas battling Ferris State and Bemidji hosting Lake Superior State. 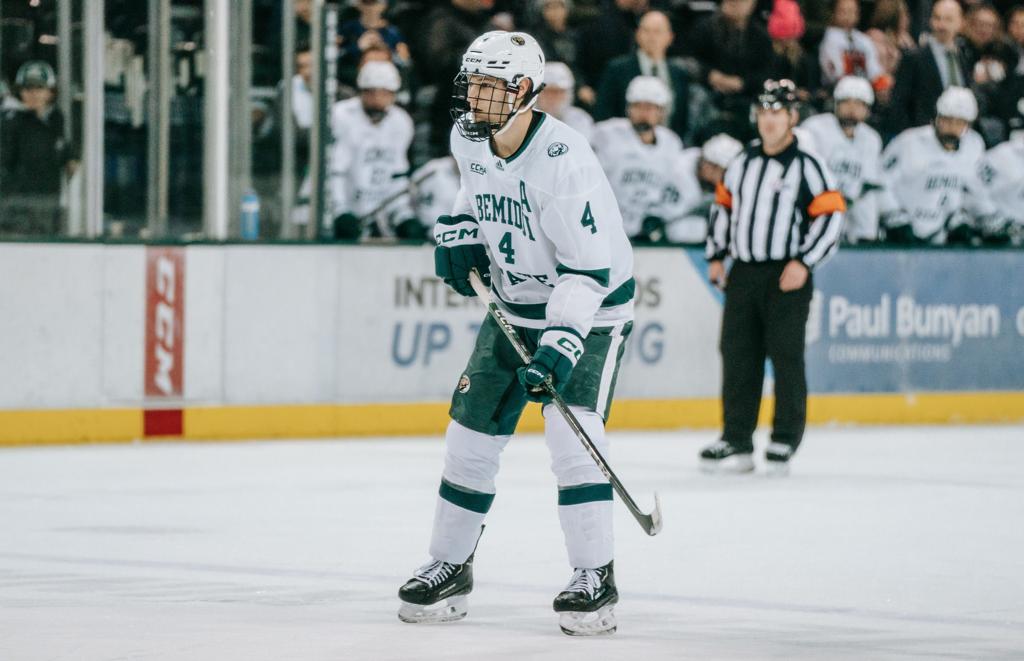 After skating to a series split in Colorado Springs a month ago, the University of Minnesota-Duluth (7-7-0) hoped for a series sweep against Colorado College (5-8-1) at home this weekend.

The Bulldogs outshot the Tigers 16-7 in the first period, but both teams came away without a goal. Colorado College broke the deadlock early in the second, with Patrick Cozzi scoring shorthanded. With 3:33 remaining in the period, Colorado College doubled their lead off a Hunter McKown goal, scoring his team-leading eighth goal of the season.

After a third period filled with penalties, Hunter McKown added a late empty net goal to help the Tigers win 3-0 in game one. Kaidan Mbereko was fantastic in net for the Tigers, saving all 39 shots faced.

The Bulldogs struck first in game two, with Darian Gotz recording his second goal of the season only 2:36 into the game. Three minutes later, freshman Ben Steeves scored to make it 2-0 on a superb solo effort, causing a turnover and then burying the puck over Mbereko's shoulder. In the second, the Bulldogs increased their lead to 3-0, with Ben Steeves scoring his second of the game off a feed from Isaac Howard.

Early in the third, Steeves capped off his great night with a hat trick, scoring his team-leading eleventh goal of the season. That 4-0 score held until the end of regulation, with the teams again playing to a series split. Senior goaltender Matthew Thiessen brushed aside all 24 shots to earn the shutout, marking his first career collegiate shutout and the Bulldogs' first shutout of the season.

The Bulldogs will again be at home next weekend, facing off against the Denver Pioneers, who currently sit atop the NCHC standings. 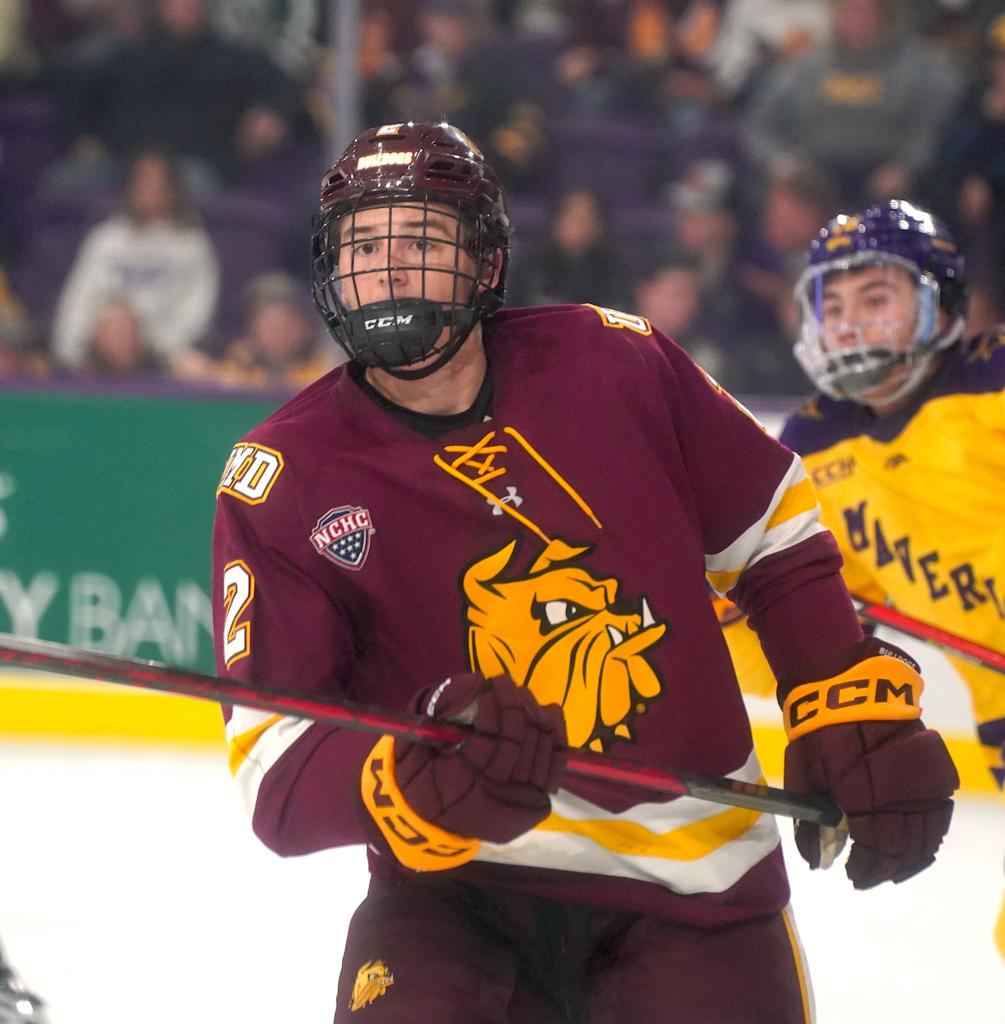