Rankings from GHS to 10U are in for this week. 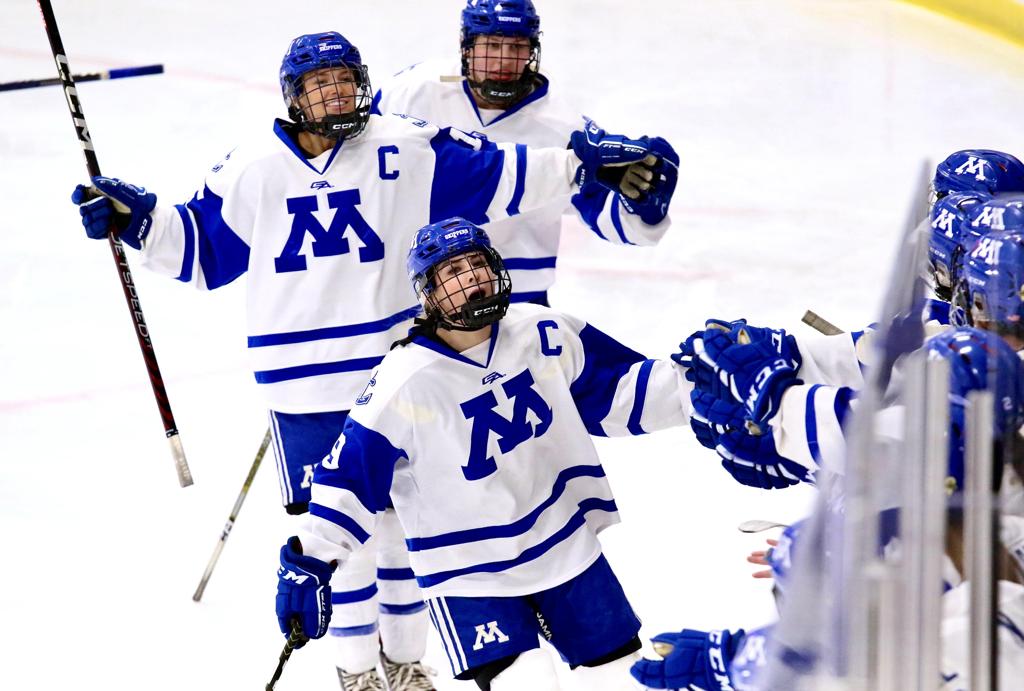 The Huskies shut out Anoka 8-0 and Elk River/Zimmerman 6-0 in their two games since the last batch of rankings. Stats have yet to be uploaded for the Elk River/Zimmerman game, but the win over the Tornadoes is the latest reason required conference schedules are on their way to the history books.

Through no fault of their own, the Huskies outshot the Tornadoes 53-3 in the win, which mercifully went to running time for the entire third period. Neither team benefits from a game like this, and with the gap widening in hockey, teams will likely search for alternative avenues for scheduling.

An 8-0 win over Eden Prairie and victory in a 2-1 overtime thriller against Hill-Murray move the Skippers to 9-1, propelled primarily by senior Minnesota commit Ava Lindsay.

Arguably the Ms. Hockey frontrunner, Lindsay recorded four goals over the two games, including the game-tying and game-winning tallies against the Pioneers on Saturday afternoon.

A three-goal second period powered the Hornets to a 3-2 win over No. 5-2A Maple Grove on the road at the Maple Grove Community Center.

Hannah Halverson, Whitney Horton, and Tori Anderson each scored once for the Hornets, and I can’t recommend watching the replay of the game (especially Horton’s goal) on the Youth Hockey Hub’s YouTube channel.

The Stars had games against Owatonna and Orono postponed last week, and I’m begging the universe to at least let the game against Orono be rescheduled. A cross-class classic between the highly-ranked Stars and Spartans? Sign me up.

Not since the Minnesota Wild unveiled the franchise’s nickname 20 years ago has Aldrich Arena seen so many bodies make their way into the penalty box.

The Wildcats and Stars combined for 17 minor penalties over three periods, including eight in the final frame.

A 3-0 win over Elk River/Zimmerman doesn’t change much for the Crimson, and a 3-2 loss to Edina does nothing more than block Maple Grove from inching into the top four. Goaltender Dani Strom played well in both games despite the different outcomes. The St. Thomas commit stopped 35 of 38 28 shots in the loss to the Hornets, then made 28 saves in the shutout of the Elks.

A massive Section 5-2A game looms with Champlin Park/Coon Rapids on Tuesday night.

The Spuds made their lone game count last week, topping recently added top-10 team Holy Family 3-2 in overtime. Neither the Spuds nor the Fire capitalized on the power play, which has been par for the course for Moorhead all season, with its shorthanded units killing off 97.1% of penalties.

Roseau and No. 1-1A Warroad are on deck for this week.

Hill-Murray stands pat for another week.

The Pioneers were a bounce away from handing second-ranked Minnetonka just its second loss of the season, and as lopsided as the shot chart was in favor of the Skippers (38-17), the bulbs in the goal column on the scoreboard were much closer, and mean much more.

Prior to the Minnetonka loss, the Pioneers scored two-dozen times in a 12-0 win over Metro East Conference foe Two Rivers/St. Paul. Ellah Hause led the way for the Pioneers with two goals and six points.

Is this case of failing upwards? Not really. I don’t think.

Despite losing to Moorhead, Holy Family advances one space in the rankings after beating former No. 6-2A Benilde-St. Margaret’s 5-2 and Alexandria 6-1 before falling to the Spuds on the road.

Freshman Haley Box has impressed as we approach the midway point of the season, leading the Fire with 11 goals and 19 points. Box scored four of the Fire’s 14 goals over the last week.

The Red Knights went down 4-1 to Holy Family and never caught up in a 5-2 loss last week, then failed to hammer down a win over Proctor/Hermantown in a 2-2 tie on Saturday.

The comeback attempt against the Mirage was impressive, with the Red Knights outshooting the northern visitors 37-21 and maintaining the edge in possession throughout the final period and overtime.

However, you'd like to see a (previous) top-six Class 2A team convert on a power play in a sudden-death situation.

The Ponies march right back into the top 10 after muttering to myself for the better part of an hour about several other teams deserving the No. 10 ranking.

Since losing to Benilde-St Margaret’s, the Ponies have taken care of business, winning three straight games, albeit against unranked teams.

Cretin-Derham Hall is the lone team on the docket for the Ponies this week, and then they’ll compete in the Breck Holiday Tournament at the end of the month. 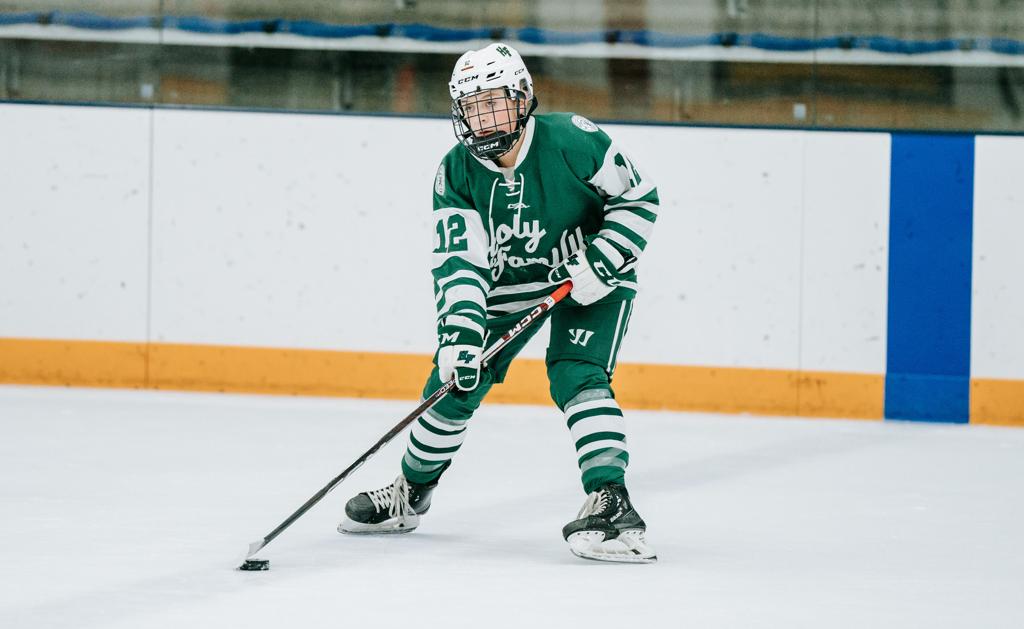 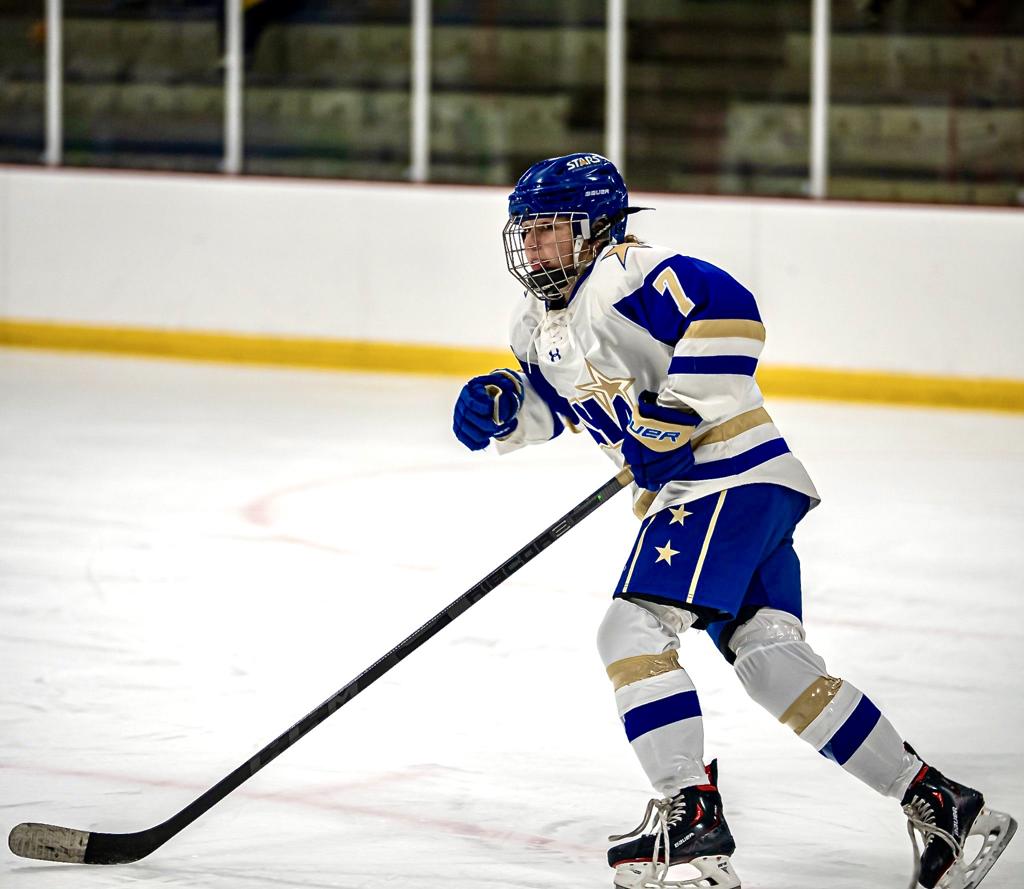 The Warriors did not play last week.

They will take on No. 6-2A Moorhead on Thursday before kicking off the Warroad Holiday Invitational against Lakeville North the day after Christmas.

In addition to making SOMEONE WHO WILL REMAIN ANONYMOUS of the Her Ice Podcast duo look ridiculous for predicting that the Class 1A top-three would change from now until the end of the season, Holy Angels has shattered the glass ceiling constructed by Warroad, Orono, and Proctor/Hermantown.

The Stars rode a pair of goals by Emilie Anderson and a 26-save performance from goaltender Eva Bentley to a 2-1 victory over previous No. 2-1A Orono last Thursday night. The win should pay dividends come section seeding time, giving the Stars the edge over the team that ended their season last year in the Section 5-1A finals.

Metro West foes Chaska/Chanhassen and New Prague are on the Holy Angels schedule for this coming Tuesday and Thursday, respectively.

The Mirage was on its way to two wins over the last week before surrendering a 2-0 lead against No. 8-2A Benilde-St. Margaret’s in the second period of Saturday’s afternoon contest and settling for a 2-2 tie.

In the scheduling valley of the pre-Christmas season, the only game on tap for the Mirage this week comes against Cloquet-Esko-Carlton.

Plain and simple, the Spartans ran into a revenge-minded Stars team hell-bent (heaven-bent?) on beating the team that needed their 2021-2022 season in last year’s Section 5-1A finals.

The Spartans will be just fine, and they showed that by blanking Waconia 5-0 behind a Zoe Lopez hat trick after falling to the Stars.

A conference game that, by scoresheet measurables, was never competitive?

ARE WE SENSING A THEME HERE ABOUT COMPETITIVE BALANCE IN CONFERENCES, YET?

Like Warroad, Crookston had the last week off, but the Pirates are back at it before the holidays with games against East Grand Forks (Tuesday) and Detroit Lakes (Thursday). 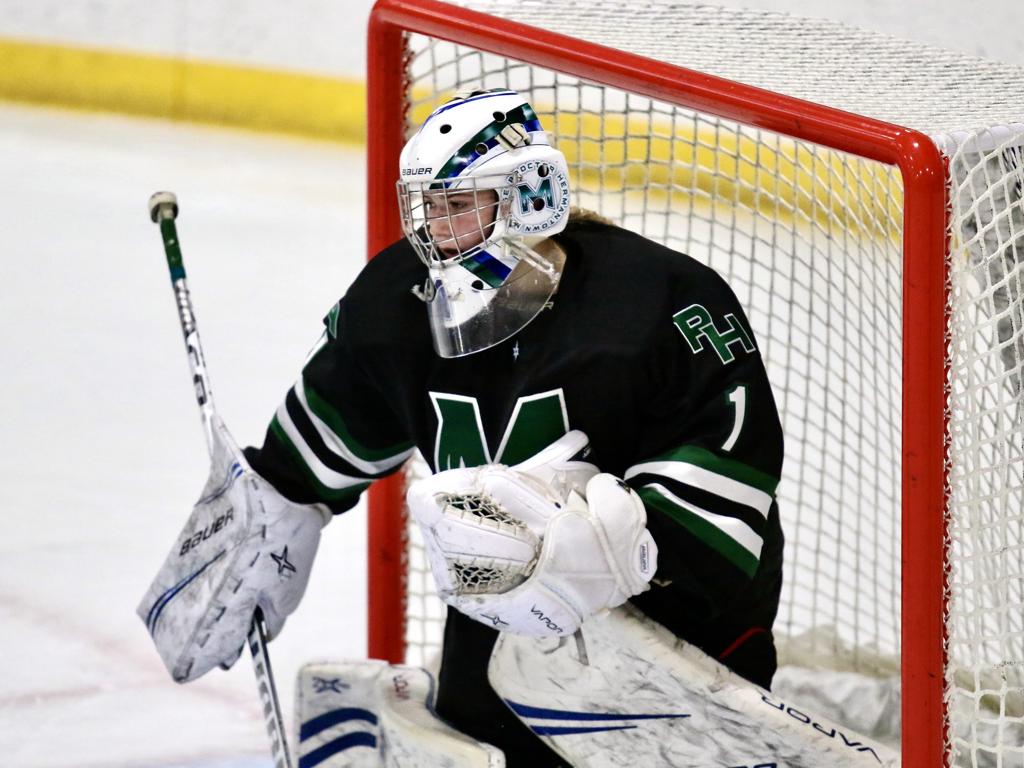 Neelah McLeod made 35 saves on 37 shots in Proctor/Hermantown's 2-2 tie with Benilde-St. Margaret's on Saturday. 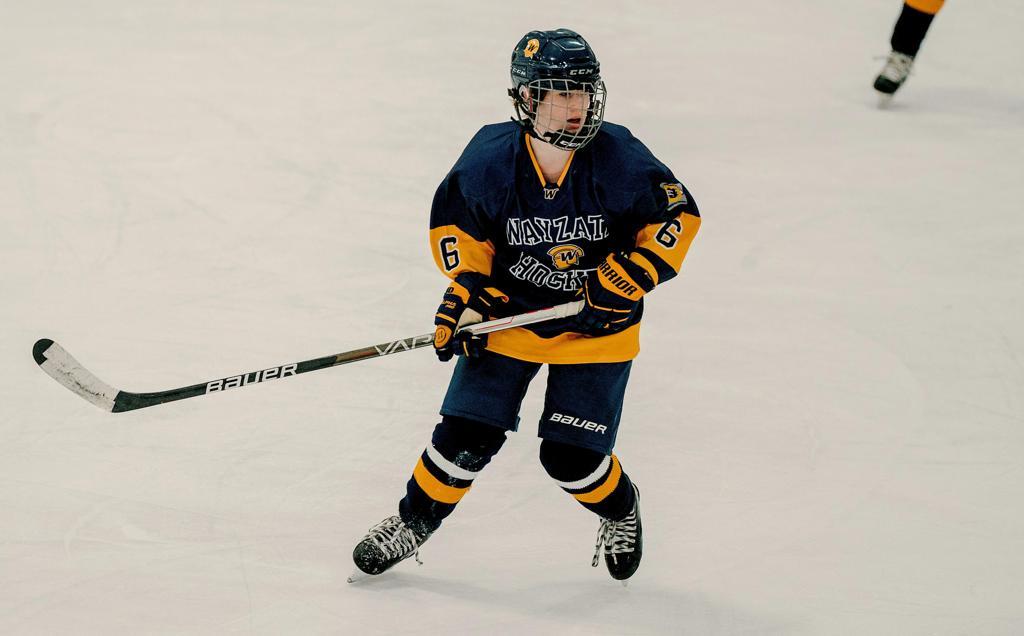 Top three teams establish themselves with clean sweeps. The teams ranked 7 to 20 all beat each other pretty bad this week. No team really has a lot of bragging rights.

We put Proctor-Hermantown in at number 10, the Mirage have a nice resume and a recent tie with No. 4 Minnetonka-Black.

Grand Rapids-Greenway won their home tournament against tough competition this weekend, defeating now-ranked No. 3 Owatonna. Speaking of Owatonna, the Huskies have jumped to third place after only losing to number one Grand Rapids-Greenway this past weekend. Lakeville is another big mover, moving up three spots to number six, as the Icecats are 12-2-1 on the year. 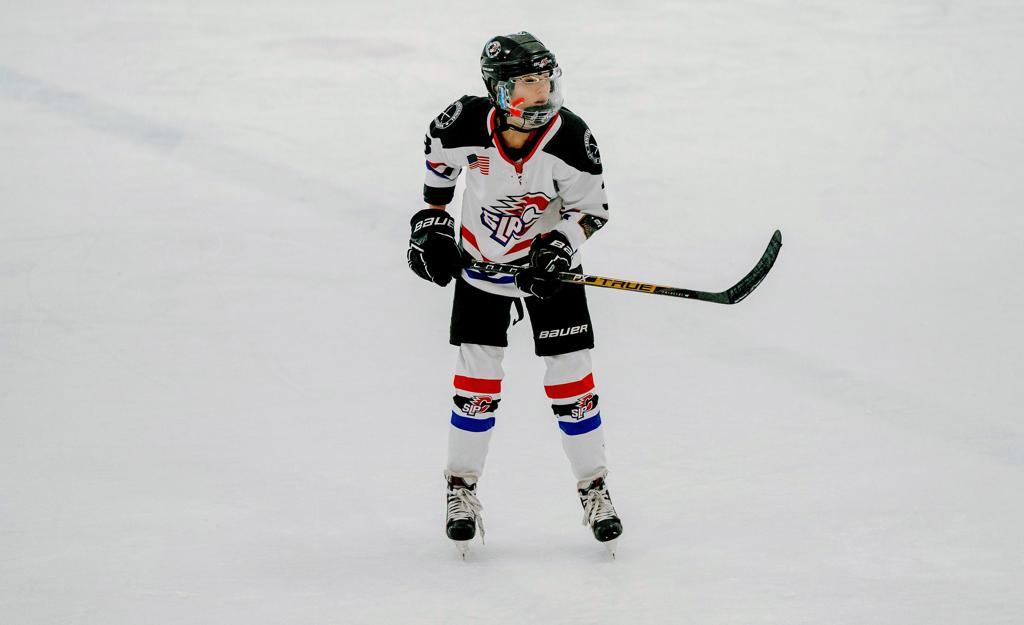 CENT/SLP stays at #3 after going 2-0 on the week (pic: Brenna Nowling)

A crazy week in 12A. Despite some unexpected results, the rankings didn't change a lot.

Grand Rapids played Hibbing (and lost), but split with Anoka-Rogers and Centennial/SLP.  The Lightning stayed at five this week.

A few teams outside the top-10 did well, including Hibbing and Cloquet.  Bluejackets beat GR-G and the Lumberjacks beat Alexandria.

There was very little movement this week, as the current top ten only lost one game all week combined. Rock Ridge moves up one spot to number nine; the Wolverines are the benefactors of a team dropping out. Wayzata (Blue) is the one new team in the rankings; the Trojans are 11-2-1 so far this season. 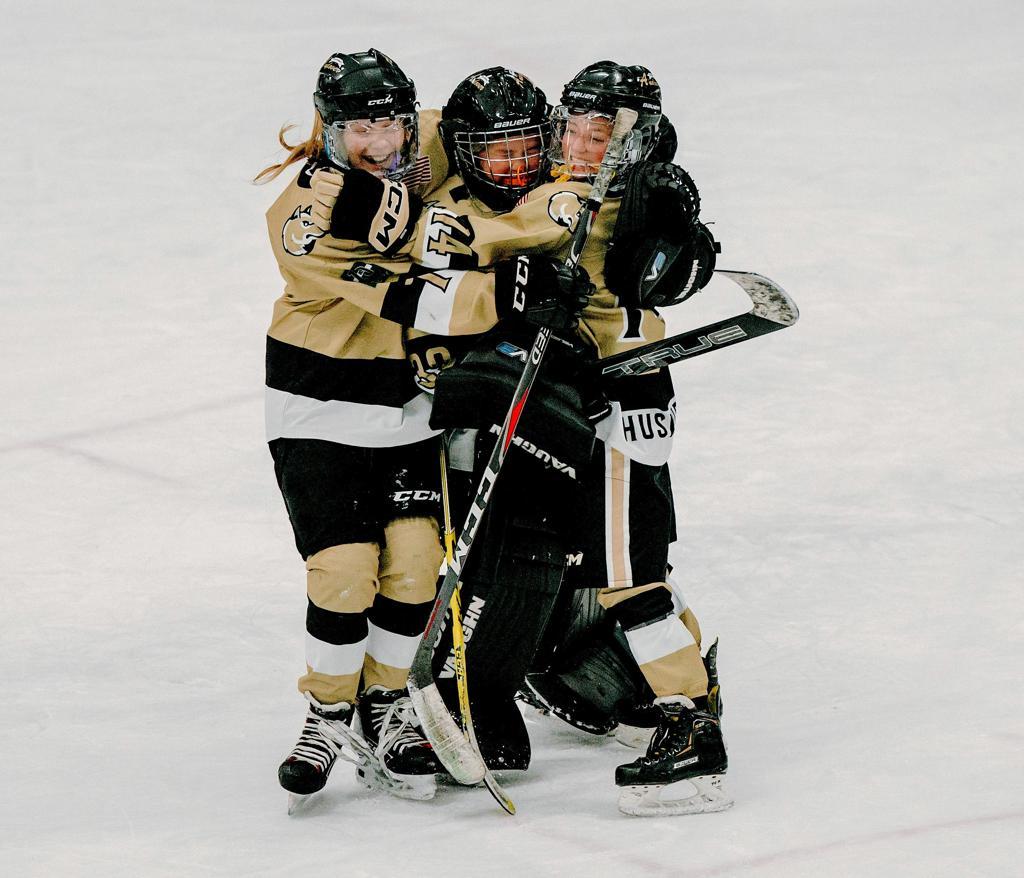 Andover comes in at No. 10 this week.

Only one loss in the entire top-10 this past week. It was an impressive loss at that!

The top six teams in our NOW Rankings have five teams with only one loss and Bloomington who is still undefeated.

Not a ton of games were played this week within our top ten. Roseville/Mahtomedi Blue is creeping up and is within striking distance of the top five. Centennial/Spring Lake Park Black is new in the rankings this week; they are outscoring opponents 129-19 right now. There is another new team in the rankings this week, and that is number ten. Forest Lake Gold is on a hot seven-game win streak.