The YHH Staff's take on the top-10 at each level. 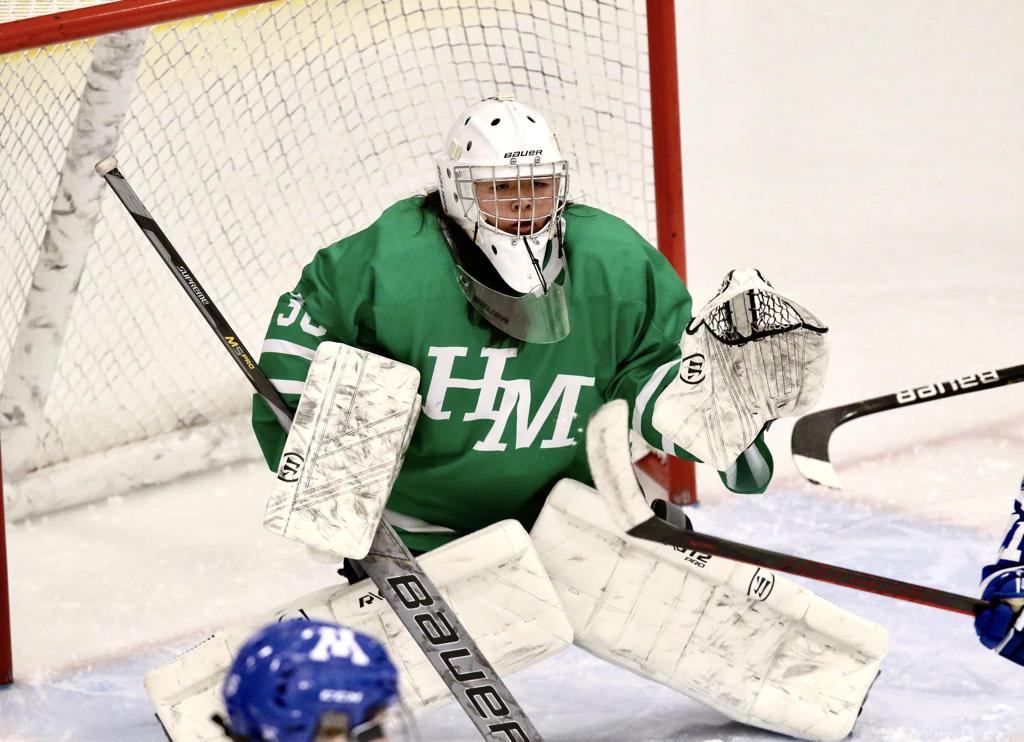 Grace Zhan led Hill-Murray to a win and a tie last week, stopping 88 shots in games against Moorhead and Warroad.

Josie Hemp totaled a goal and four assists in the win over Buffalo, while Lauren Mack and Ellie Zakrajsheck each scored once in the victory over North Wright County.

The Skippers will face Wayzata on Tuesday and No. 4-2A Edina on Saturday this upcoming week.

A weekend slate that included Blake and Class 1A power Proctor/Hermantown proved no contest for the Huskies, as the defending Class 2A state champs cruised past the Bears 6-1 and then thumped the Mirage 7-2.

Statistically, Isa Goettl and Ella Boerger lit up the scoresheet in each game, with Goettl notching four goals and nine points and Boerger totaling two goals and seven points over the weekend.

It would also be of note that the Huskies took 10 penalties in the win over the Mirage, were it not for the fact that Proctor/Hermantown went 1-9 with the player advantage.

The overtime heroics of Ellie Sarauer extended the Stars’ winning streak to eight games on Saturday, as Gentry battled back from a 2-1 to sneak a win over Holy Family on the road in Victoria.

The Stars will now host Moose Lake Area and Hastings this weekend before making a northern swing through Proctor/Hermantown, Crookston, and East Grand Forks.

The Hornets used a pair of power-play goals to eke out a 2-1 win over No. 1-1A Warroad at Braemar Arena on Friday night, holding the mighty Warrior power play to zero goals on four chances in the process.

Lorelai Nelson scored both goals in the win for the Hornets, who also got a sparkling performance from Uma Corniea, who stopped 39 of 40 shots in the win.

The Pioneers topped Moorhead 6-1 in their first game back at Aldrich Arena since Dec. 10, then followed the win with a 3-3 tie against Warroad, proving that the girls in green can survive (and thrive?) without senior defender, team captain, and even after missing two games their third-leading scorer Ellah Hause.

Grace Zhan’s goaltending stole the show for Hill-Murray over the weekend, with the Dartmouth commit making 39 saves in the win over the Spuds and 49 stops in the tie with the Warriors.

Back-to-back wins last week push the Crimson one slot ahead of Holy Family this week, and putting Alexandria into running time on Saturday only strengthens the Crimson cause.

Playing without all-world starting goaltender Dani Strom has given sophomore Elie Hancock the reigns between the pipes, and Hancock has answered the bell. Hancock stopped 26 of 28 shots in the win over the Rogers, then made 24 saves as the Crimson blew past the Cardinals on the road. Forwards Bella Shipley and Stella Retrum combined for four goals and 12 points in the Alexandria win.

Holy Family took No. 3-2A Gentry Academy to overtime in its lone game last week, and if the Fire had pulled off the upset, the rankings would have been more chaotic than the Bay of Pigs.

Alas, the Fire finds itself burning at the No. 7 spot this week and, after the loss to the Stars, find itself 1-3 in games decided in extra innings this season.

Myah Krueger and Hunter Reardon each scored once in Stillwater’s win over Suburban East Conference rival White Bear Lake, the only game on the Ponies’ schedule last week.

As mentioned last week, finding scoring punch without its leader in goals, assists, and points, Josie St. Martin, will be critical for the Ponies to tread water until her return from Sweden.

Fortunately for the Ponies, their next two games come against Mounds View/Irondale and Woodbury, programs with a combined record of 12-17-1.

The loss to Hill-Murray, especially by the decisive score of 6-1, stings the Spuds, but thanks to Blake’s .500 record, Champlin Park/Coon Rapids officially tying 1-12-2 Eagan, Centennial/Spring Lake Park not having any wins to get jazzed about…the Spuds remain in the top-10.

The Spuds bounced back from the loss to Hill-Murray with a 4-1 win over St. Cloud on their way back up I-94, powered by two goals from Anika Stromme.

Alexandria comes to town on Tuesday, then Sartell/Sauk Rapids makes the trip to the Moorhead Sports Center on Thursday, then the Spuds travel to North Wright County to polish off a three-game slate.

Two goals in the third period allowed BSM to pull off a 4-1 win over Chaska/Chanhassen last Thursday, giving the Red Knights a victory in their lone game of the week. The Red Knights got two goals from Ella Pasqua in the win and outshot the Stormhawks 49-8.

The rescheduled game against Orono is on deck for Tuesday night, then dates with Eden Prairie and Holy Angels to round out the week. 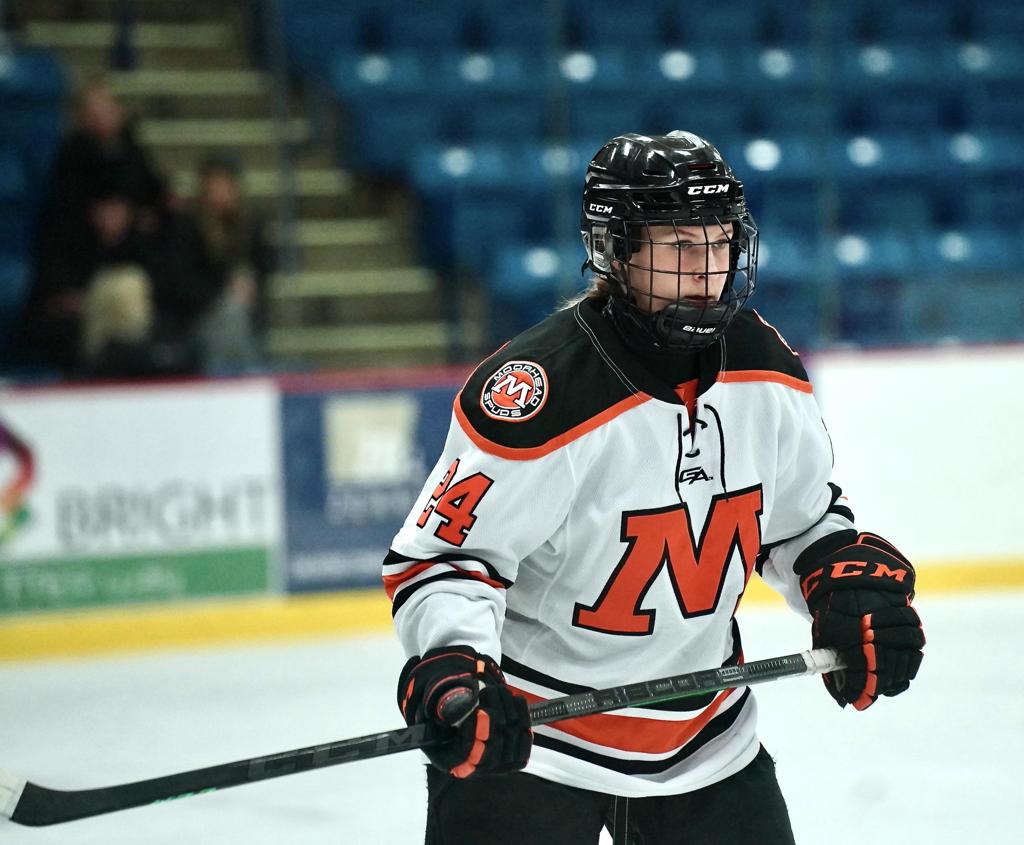 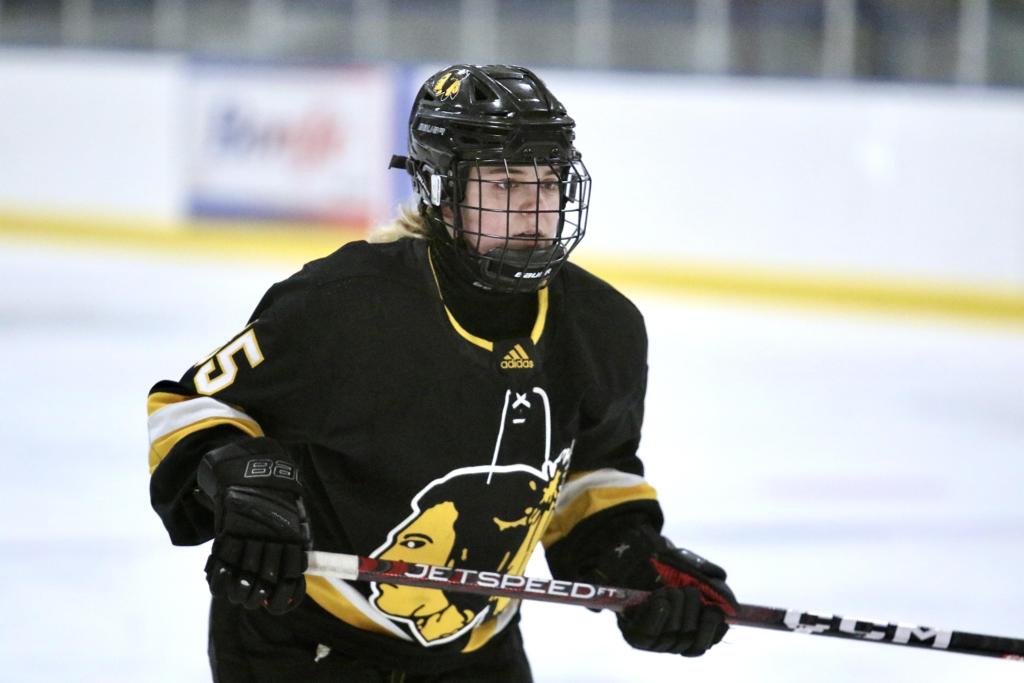 Lila Lanctot was one of three goal-scorers for Warroad in Saturday afternoon's 3-3 tie with Hill-Murray.

You can’t knock Warroad for a loss when you consider the opponent (Edina), but if you wanted to nitpick, it would have been nice to see the Warriors pull off the win against Hill-Murray.

In any case, those games will not shake the Warriors from the top spot in Class 1A. They’re too deep and have a top unit that can compete with anyone in the state.

A five-goal second period led the Stars to a 6-0 win over Metro West Conference foe Bloomington Jefferson on Thursday, giving the Stars a boost heading into two more conference contests this week against New Prague and Minneapolis.

Normally I wouldn’t hold a loss against arguably the top Class 2A team in the state against a Class 1A squad, but the combination of losing by five goals, being outshot by a 22-shot margin, and only converting on one power play out of nine chances slots the Mirage in at No. 3 this week.

The Mirage topped Section 7-1A rival Moose Lake 7-1 prior to the Andover loss, offering the program a small piece of consolation heading into next week.

29 saves from Sydney Ries and the friendly confines of Vets Arena allowed Simley to pull off the mini-upset win over South St. Paul last Thursday, giving the Spartans their (probably overdue) spot in the top five.

The Spartans have won 11 in a row heading into this week, where they’ll face Hastings on Tuesday and No. 5-2A Hill-Murray on Friday.

While a 3-3 tie with South St. Paul leaves much to be desired for Class 1A hockey fans hoping for a decisive result either way, the Spartans picked up a 6-5 overtime win over last season’s Section 1-2A champion Northfield to push past Mound Westonka/Southwest Christian this week and hang on to the No. 5-1A slot. 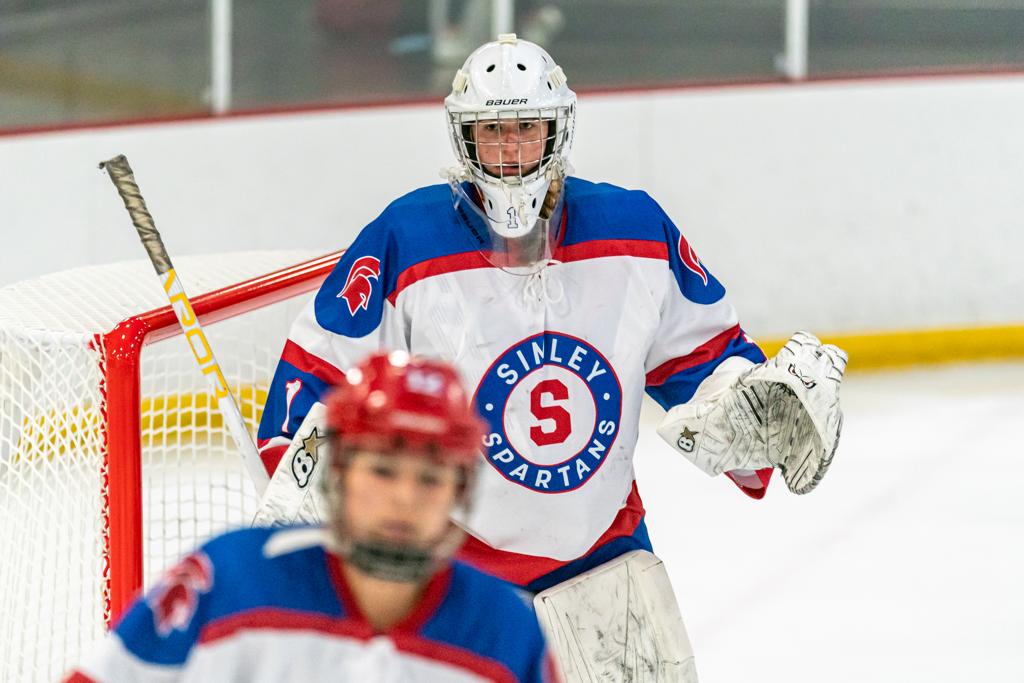 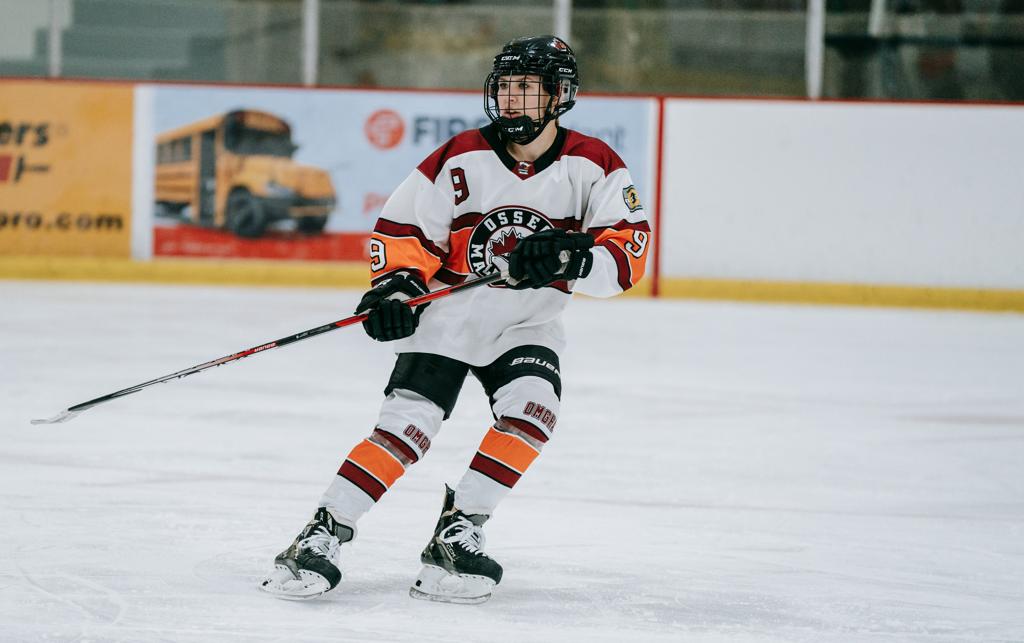 OMG is the new #1 this week after a win over previous #1 Wayzata(pic: Keira Thompson) 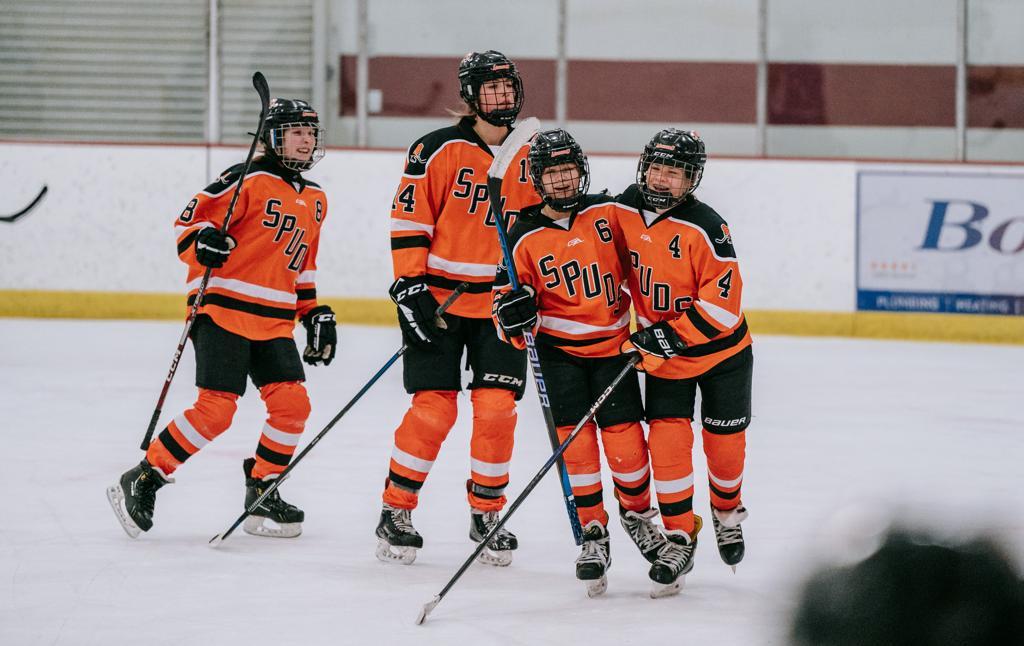 Spuds are #4 this week

Orono Westonka is the only change in the rankings this week, as the Warriors beat No. 7 Stillwater this past week. One major thing to watch as the season nears the final stretch: will Grand Rapids-Greenway stay undefeated? At this level, there are three contenders from different parts of the state. In the north, you have Grand Rapids-Greenway at (16-0). For the South, Owatonna is (20-1-2), and a metro team that is a contender is OMG White at (21-3-3). 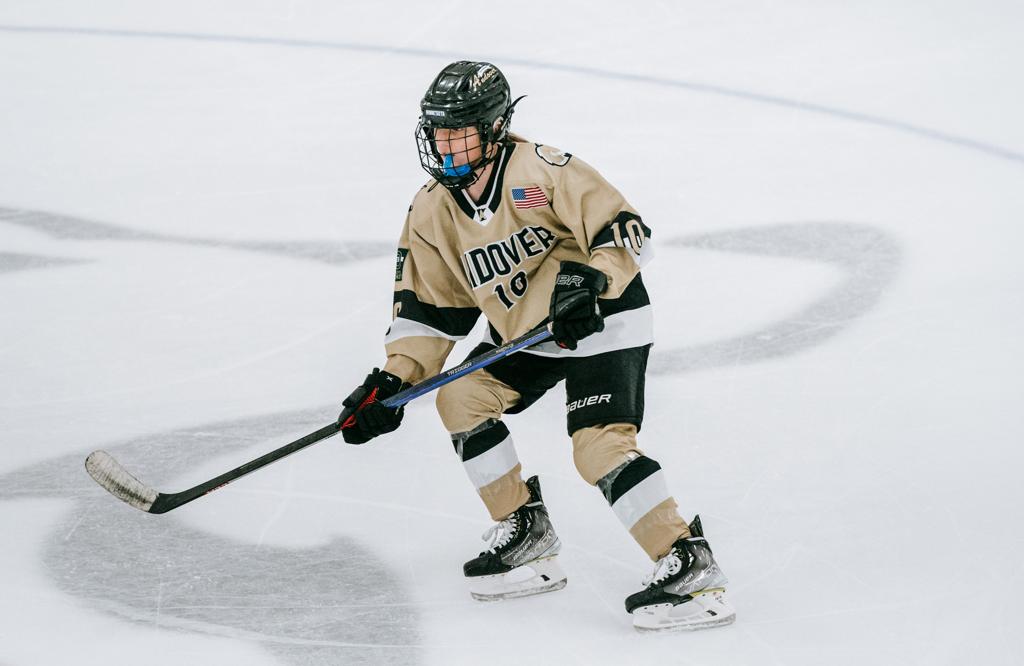 Woodbury keeps humming along at #1. The Preds haven't lost since November 6 (Cent/SLP). 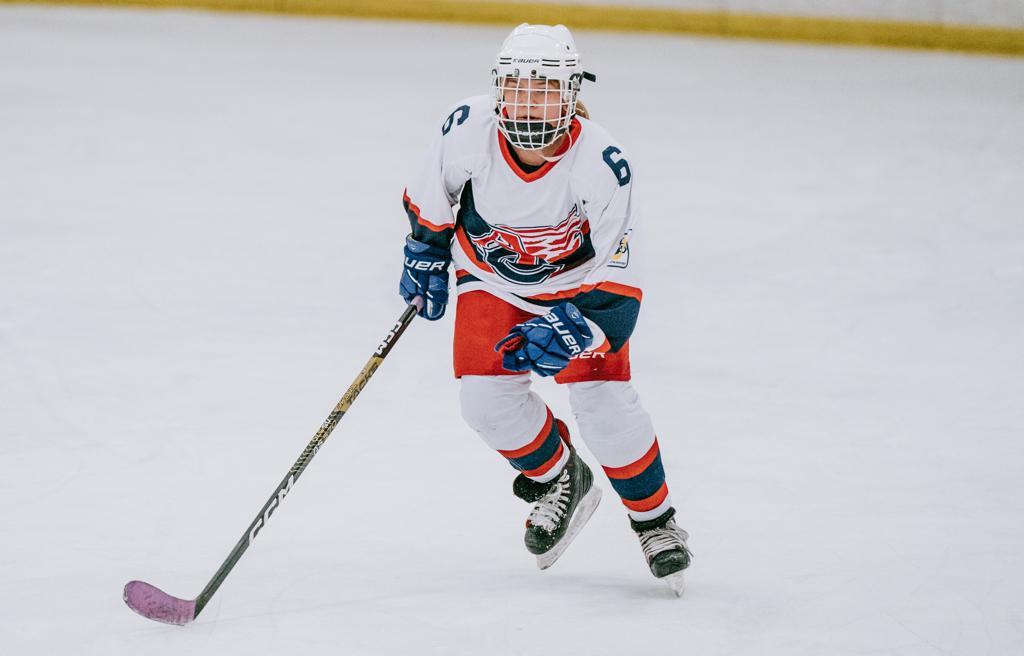 Armstrong Cooper is up three spots to number two, and being on a 12-game win streak is a big part of their rise. Wayzata Blue is the biggest riser at this level, and the Trojans go from ranked tenth to number four this week. The Trojans are on a seven-game winning streak. The myriad of new teams this week entering the rankings are the trio of Two Harbors/Silver Bay at number seven, Edina Green at number nine, and Woodbury Black at number ten, respectively. 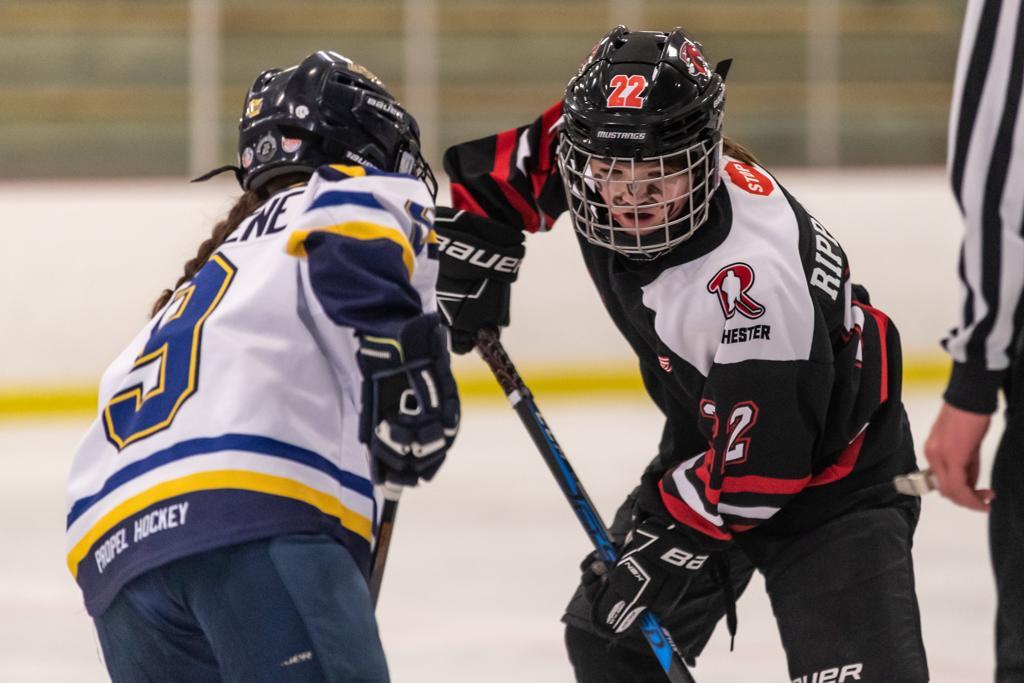 Rochester is hanging on at #10 this week. The Mustangs were idle.

If there was an award for hottest team in the state...it would go to No. 3 Chaska Chan. The Stormhawks have won 12 of their last 13, including two tourney wins (YHH Danglefest and Scheels Fargo).

No. 1 Anoka-Rogers hangs onto #1 despite a tie with a scrappy White Bear Lake team.

Some very good teams at this level, including No. 6 Lakeville. The Cats have quietly ran up a 10-1-1 record so far. 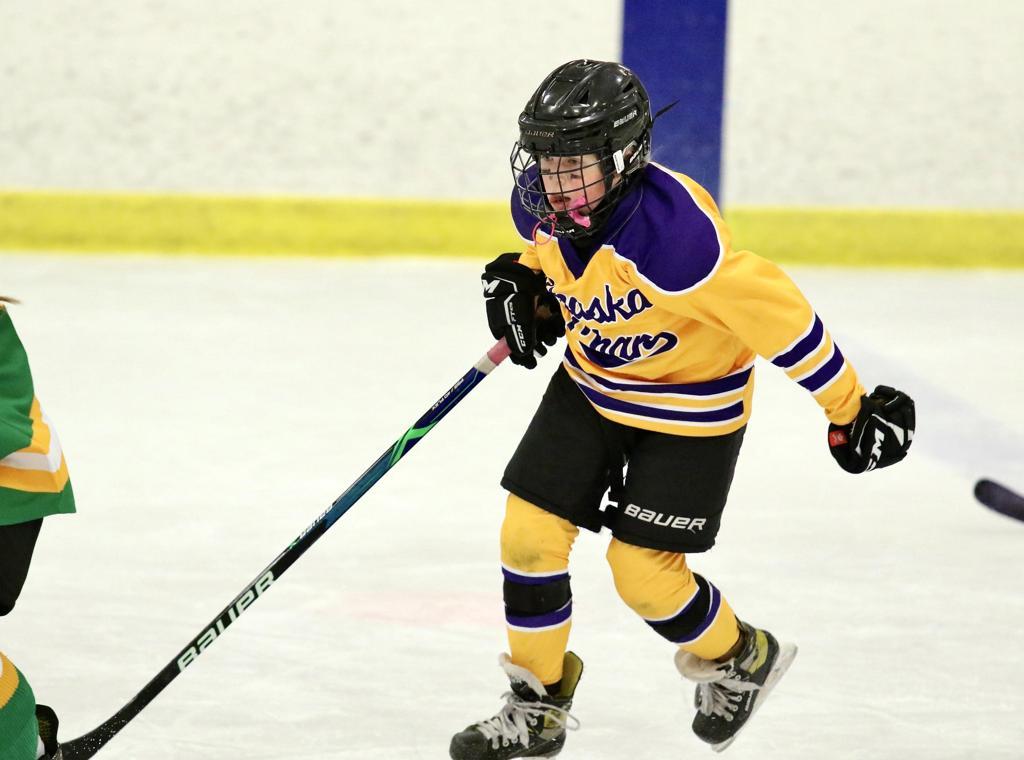 Number two: Roseville/Mahtomedi Silver wins a tournament in Blaine this weekend, and the Marauders continue to dominate. Armstrong Cooper Red is up one spot this week to number six, and the Wings only have one loss all season. There are a pair of new teams that entered the rankings this week. The new first team is number eight, Hastings, and the Raiders are currently on a seven-game winning streak. Marshall has been having a solid season, and the Tigers are recognized for their success and enter the top ten.