Minnnetonka wins 6AA Sectional in the chase for #3 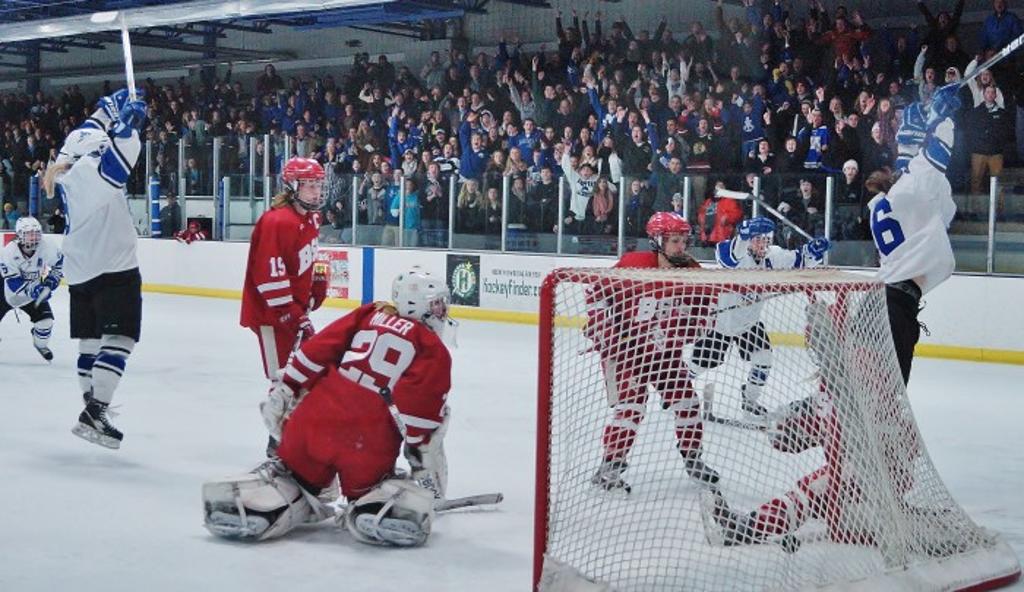 Two-time defending state champions, Minnetonka, was in trouble deep into the third period.  They trailed a Benilde-St. Margaret team 2-0 with less than seven minutes left in the game. The Red Knights simply wouldn’t let the Skippers “have their stick”.

The #1 ranked Minnetonka players could hold their stick and skate, but as soon as they tried to use it on the puck, a Red Knight would step in and knock it loose.  The #3 ranked Benilde-St. Margaret team did that over and over again until the last seven minutes of the game.

In those seven minutes, somehow, the Skippers put a game together and scored three goals (two while on the power play including the game winner) to keep their “three-peat” hopes alive.

Last night’s game played at Parade Ice Arena would be the third game between the two teams.  The Red Knights beat the Skippers 3-0 in early December and lost two weeks later 2-1 in the semifinals of the Eden Prairie tourney.

The two top ranked teams played a so-so game for the first period.  Perhaps they waited until the stands were full to really start to roll.  The third period was the barn burner.

The pre-game start after the national anthem was played was different.  The two teams stood at their blue lines with helmets off for a couple of minutes after the anthem ended with the refs skating up and down the two lines of players.  Then on cue, both teams rapped their sticks on the ice and went to their respective nets.

And then there was another long huddle at the nets in front of a quiet rink before the teams broke for their bench and center ice.

The tone for the game was set at the 11 minute mark of the first period.  The teams played the opening minutes raggedly.  Each team had some pressure and the Red Knights were starting to pressure each Skipper fighting for puck control, but the play had no flow.  At the 11 minute mark, Benilde scored.

It was a simple play.  Red Knight defenseman, Kelly Pannek, picked up a loose puck along the right boards and took off beating the Skippers defense on the outside and cutting back into the top of the crease area to put the puck in the net.  Just like that, Benilde led 1-0.

Most thought that Minnetonka would counter quickly, but that one goal lead became a mountain for the Skippers.  The game tempo moved up, but the Skippers could never get fully organized and on the attack.

Once in the Knights’ zone, the Skippers tended to skate the center high moving from side to side while the wings go low after the puck usually along the end boards.  The first problem they had was to get the puck into the end board area to get pressure.

In the Tonka half of the ice, Benilde was constantly stepping into the breaking Skipper and one way or another knocking the puck loose.  Another Red Knight would take the loose puck and either counterattack or dump the puck.  If a Skipper got loose for a shot, Benilde’s nearest defender would step into the puck blocking the shot with her body or reach with the stick and block the shot sending the puck harmlessly to the boards.

It was not a great period of hockey, but Benilde had done what was needed and took a 1-0 lead into the locker room.  The Skippers looked grim as they left the ice, the Red Knights looked loose.

The second period opened with Minnetonka gaining control of the play down low in Benilde’s zone.  The Skippers would get the puck to the blue line and would pass or a skater would skate the puck along the blue line looking for a shot.  They got no shots on the net as the Knights continued to pressure the Skipper forward’s stick once they went for a shot.

The game pace was fast when play transition and the teams fought to setup in their opponent’s zone, but once in the zone, the puck movement slowed.

The play and game pace picked up after the second penalty.  Minnetonka started to dominate play with six minutes left on the clock.  They were succeeding in getting the puck into the Red Knights’ zone and gaining control down low, but still not getting the good shot on the net.

At the 4 minute mark, Benilde forwards came alive and applied tremendous pressure on the Skippers, bottling them up in the Tonka zone for a two minute stretch, keeping the pressure on and preventing the Skippers from changing lines until Minnetonka finally iced the puck.

After that burst, the Knights drew their third penalty of the period for tripping.  Benilde was tiring.  They had to work hard to kill the penalty especially the last half of the penalty.  They did.  Both teams looked spent as they left the ice.

The Red Knights still led 1-0.  Tonka got more shots on the net in the second period (10), but Benilde’s defense containing the Tonka sticks on the shot was still holding.  Most of the Skipper’s shots on net were weak.

In the opening minutes of the third period, the Skippers drew a penalty and gave up a goal.  The Red Knights established control of the puck on the power play low in the Tonka zone on the right.  A Benilde forward took a shot at difficult angle and the puck rebounded to the weak side of the net where Caitlin Reilly rapped it into the Skippers’ net.

Benilde led 2-0 and for the Skippers’ the mountain got higher.  Liv Halveorson and Kelly Pannek got the assists.

Benilde started to send a single player high into the blue line area after that goal.  Minnetonka was breaking through the Red Knight’s defense in the Skipper’s half of the ice regularly and starting to set up and control the puck in Benilde’s zone.  The Knight players, low in their zone, were looking to beat the defense with a pass along the board or into the center ice area.

It kept the Skipper defense from being too aggressive, but opened the center blue line area.  The Skippers had two great scoring chances after falling behind 2-0 but could not beat Benilde’s goalie Miller.

With a little less than 8 minutes remaining in the game, the Red Knights picked up a tripping penalty and the Skippers came alive.  They worked the puck constantly to the defense at the center blue line for a hard shot.

Thirty seconds into the power play, Tonka scored on tipped shot from the center blue line.  Hannah Behounek got the goal.  Amy Petersen got the assist.

On the ensuing face off, the Skippers carried the puck into the Knight’s zone and slid the puck into the area at the top of the crease from the left side.  A Skipper and a Knight locked up with the puck dangling loose between the two player’s skates out of Miller’s reach.  The puck was knocked into Miller’s pads (she had dropped to her knees) and the Skipper’s Amy Petersen took a hard shot and drove the puck through Miller into the net.  Peterson got the goal and Sydney Baldwin the assist.

The Skippers had climbed that mountain.

Now they came down with a vengeance.  Trying to break through the Knights defense just inside the blue line, the Skipper forward fell and for a moment, it looked as if the refs would let it pass.  They didn’t.  They delayed, but called a tripping penalty on the Knights.  That is all Minnetonka needed.

Thirty seconds into the power play, a Skipper forward drilled a hard shot on Miller who stopped the puck but couldn’t control the rebound.  The puck bounded forward off a skate of a Benilde defender and into an open area in the crease.  Tonka’s Behounek reached around the defender and caught just enough of the puck to send it towards the open right side of the net where Laura Bowman was waiting.

Bowman put the puck into the back of the net high over a Benilde defender outstretched leg 6 inches inside the right post.  It was an unassisted goal.

After taking the lead 3-2, the Skippers were flying off the mountain.  The Red Knights pulled their goalie in the last minute, but the Skippers never let the Knights get set, constantly knocking the puck off their stick and tying them up.  The clock ran out with the puck in the neutral zone.

The Skippers head to the state tourney next week, likely as the #1 seed, and an opportunity to “three-peat”.  Benilde goes home after losing their third straight 6AA regional final to the Skippers.

RT @usahockey: "One of the greatest rivalries in all of sports." 🇺🇸 vs. 🇨🇦 tonight at 7:30 p.m. ET on @NHLNetwork! #MyWhyTour game previe…