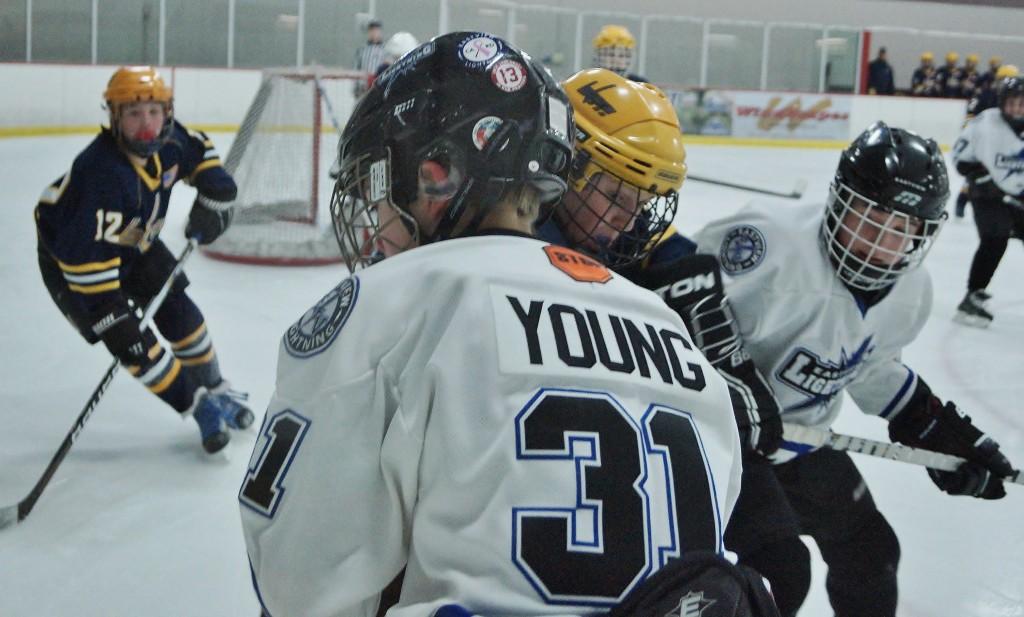 While all the attention is focused on the holiday tourney results, a key game was played last night at the Eagan Civic Arena.  YHH #16 ranked Prior Lake AA beat #3 ranked Eastview 3-2 in a key game that provides a mid-season match-up of the strengths of D6 versus D8.

Six of the 8 teams playing in the East Regional March 1-3 at Cottage Grove will come from D6 (three) and D8 (three).  D6 and D8 teams will be playing for one of the two coveted East Regional seeds to the state tourney.

Last week, Eastview lost to Jefferson AA in the opening round of Bloomington’s Midwest Regional Tourney and came back to beat D8 rivals Rosemount 3-0 and Woodbury AA 2-1 to win the consolation title.  Prior Lake has won their last four games beating Centennial AA 3-2, Stillwater AA 2-1, Rochester AA 3-0 and White Bear Lake AA 2-0.  They were impressive wins and holding four good teams to three goals was even more impressive.

It looked to be a good game.

Both teams opened the game playing tentatively.  It almost cost Prior Lake a goal.  Eastview caught Prior Lake’s goalie out of the net in the right slot area, and tried to put the puck in the open net in the first minute of play.  The Lightning had three good shots at the net, but couldn’t score before the Lakers cleared the zone.

The Lakers controlled the play after that score.  They established control of the puck in the Lightning zone moved the puck well and had some good shots.  But they could not beat the Lightning goalie Trevor Lunde.

Still the Laker defense men were controlling the puck at the Eastview blue line, bottling up the Lightning forwards on the breakout.  As a result, Prior Lake kept the pressure on the Eastview defense.

As the first period wore down, the overall game play became ragged and very loose.  The last two minutes were dominated by Prior Lake, but they couldn’t score despite some nice passing on a “give and go” play.

The pace picked up in the opening minutes of the second period.  It became more of a transitional game with both teams having good scoring opportunities.  Neither team could hold the other in the zone after a scoring chance.

Eastview’s goalie Lunde came up with a big save on a tough close-in shot with 7 minutes left to play in the second period, but a minute later was beaten by a hard tough shot from the Lakers’ Joey Collins in the left slot.  Collins’ goal was unassisted and it tied the game 1-1.

With the second period winding down, both teams seemed to tire, the game returned to a ragged loose style that marked the end of the first period.

With a minute to go, Eastview suddenly up the pace.  They pressured Prior Lake’s goalie Ryan Miller down low around the net.  The Lightning’s Jack Young took a pass from behind the Laker’s net, squared and fired a hard shot from just under the right faceoff dot.  He caught the goalie moving too soon and hit the right side of the net.  It was a spot the Prior Lake goalie had just vacated.  Chris Fan got the assist.  The Lightning led 2-1 as the second period ended.

Eastview played flat in the opening minutes of the third period and they began to play defensively.  Their forwards started to give the Lakers more and more ice to maneuver.  And it cost the Lightning the game.

In one thirty second period, Prior Lake scored two goals.  With the Lightning not forcing in the neutral zone, the Lakers set up in the Lightning zone and attacked.  At the 7 minute mark, the Laker’s Lukas Metcalfe scored to tie the game 2-2.  Brock Penton and Bennet Holst got the assists.

The Lightning upped the pace after Prior Lake scored the third goal.  They pressured the Laker’s defense in the last minutes of the game, but could not score.  Prior Lake won 3-2.

Prior Lake returns to D6 action this weekend.  Saturday the Lakers host Burnsville in a D6 game and Sunday they host #7 ranked St. Michael/Albertville.

For the Lightning, this was the first of two tough games they played this week.  Sunday the Lightning, unbeaten and perfect at 7-0-0 in D8, will play Lakeville South also unbeaten and perfect at 8-0-0.  The winner of that game will have an edge in the D8 playoffs.  This will be the only D8 game between the two teams.  The two teams have split their two non-league games; Eastview won 3-1 and lost 2-1.

With five regional seeds at stake for the D8 Peewee AA teams, the winner of Sunday’s game will probably end up in the East Regional.

RT @HocIQ: These fellas have put some miles on & taken a beating. The safest way to learn/gain confidence with body contact/checking. Who’s…