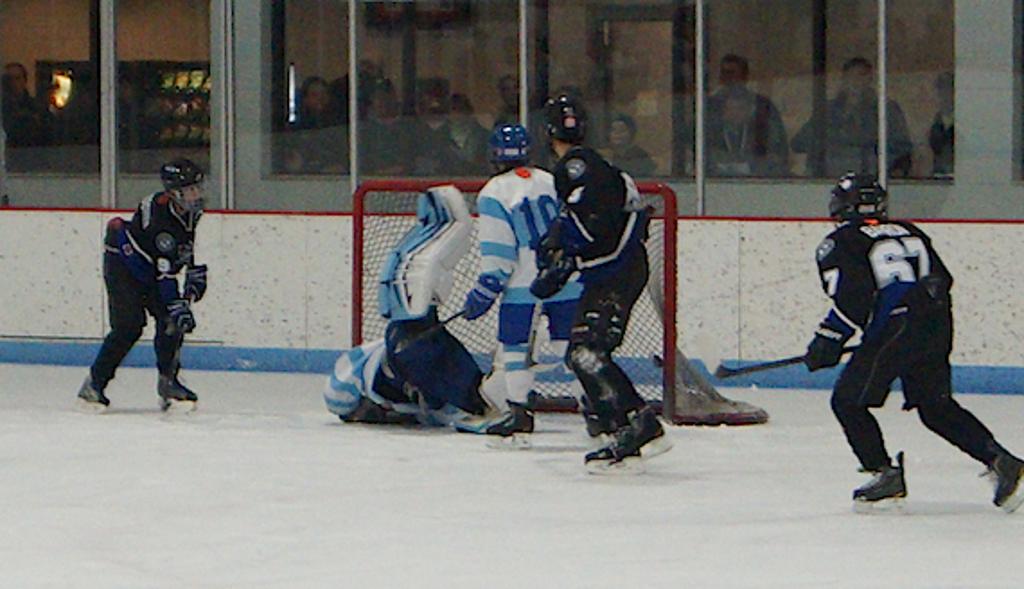 Noah Desrocher knocks home a goal past a flying Evan Redepenning in Friday’s first round game versus Jefferson.

We saw 4 games Friday at Bloomington Ice Garden (3 PeeWee and 1 Bantam B).  Two overtime thrillers featuring projected favorites losing in dramatic fashion.
Game 1: #2 Stillwater upends Wayzata (Navy) in overtime.  Matthew Stanton scores with 6 seconds left in Overtime to lift #2 Stillwater over Wayzata (Navy).  For a full game recap, see this link. A great game played by two great teams. Both teams had their chances to end it regulation, some denied by goalies Jaxson Stauber from Wayzata and Mitch Bailey from Stillwater.  Other chances were denied by the officials.  Both teams had goals disallowed by the officials with less than five minutes to go.

Game 2: Tartan beats neighbor Woodbury, 5-2. A tale of special teams prowess.  Woodbury scored the game’s first two goals (both on the power play).  Tartan scored the next five goals, three of which came on the man advantage. It was like watching two separate games.  The first game was all Woodbury, the Predators controlled the play, the shots and the certain outcome.  And then Tartan got an unexpected break and cut the Woodbury lead in half at 2-1.  From that point on it was all Titans.  Luke Mountain for the Titan really stood out – big strong skater with great hands and silky smooth moves.

Game 3: Jefferson finally beats Eastview.  Over the past few seasons, these two teams have played each other  a bunch.  Twice as Squirts, MASH league, a tryout scrimmage in October, etc.  All of the outcomes were ties or Eastview victories.  Friday’s game was no different.  Eastview jumped out early with a beautiful goal by Eastview manchild Christopher Fan on a breakaway. The Jaguars answered with a tip in goal of their own in the second period to tie it 1-1 after two.  Early in the third period, Jefferson applied pressure and got a point blank shot on Eastview backup goalie Trevor Lunde…and Lunde made a remarkable save to keep the score 1-1.  Eastview would finally break the tie with a rebound goal by Eastview great, Noah Derocher to make it 2-1 and then a minute later the Lightning added an insurance goal by Tim Kapala to make it 3-1 with 8 minutes to go.  At this point the game slowed a bit.  Jefferson was running out of steam and Eastview was relieved to be up by two goals.  Usually in hockey this is a danger point for one of the teams.  Either they are going to get blown out or the other team is going to come back. With about 5 minutes left with Eastview carrying the play looking for goal number 4, Jefferson speedster Nathan Johannes got free on a breakaway.  And guess who was there to answer? Lunde again! He stonewalled Johannes with a pretty glove save to keep the score at 3-1. With less than three minutes to go Jefferson Defenseman Tristan Larson got a loose puck in at the point and he fired into traffic in front where Jefferson big man Justin Zielinski got a stick on it for a Jaguar goal, 3-2 Eastview.  And then one of the key plays of the game happened.  Scrappy Jefferson centerman Tyler Rollwagon got loose in the Eastview corner and a desperate Eastview defender slashed Rollwagon baseball style for a two minute rest in the sin bin.  With the goalie pulled Larson again got the puck at the point and got a puck on net.  And guess who was there to knock it for the game tying goal?  You guessed it, Justin Zielinski.  His second goal in two minutes. Overtime came and went with two shots each for both teams and very few really good scoring opportunities. Then came the the shootout.  Jefferson got on the board first. Tristan Larson made a pretty move on Lunde to make it 1-0 after the first round of five.

Eastview superstar Joey Stillings froze Jefferson goalie Evan “Chewbacca” Redepenning to tie it in the third round.  Lunde and Redepenning would show more brilliance until the final round.  With the shootout score at 1-1, up stepped Cole Jungwirth from Jefferson with a chance to win it.  Cole, a right handed shot came in wide on Lunde and froze him with a fake shot and then dragged it wide as Lunde went to a butterfly expecting the shot, to which Jungwirth held the puck long enough to create space and drive the puck home for the win. Jefferson wins their second shootout in two weeks and advances to the next round.  Many at rink speculated that this game was the Championship game being played in the first round.  If so, it was a great Championship game played by both teams.

Game 4: Wayzata “A” leaves lasting impression on AA Rosemount, winning 7-1.  In the nightcap game of the PWA Division, Wayzata “A” played very well rounded complete game to defeat Rosemount 7-1. The Trojans have three balanced lines with a next mix of size, speed and talent.  These kids just kept coming in waves nearly outshooting Rosemount by 15 shots in the game.  They lead 1-0 after an evenly played first period.  Rosemount had it’s chances early but could not capitalize.  Wayzata’s Linden Olness played great when his team needed him.  Eventually in the second period Wayzata got on a roll.  Adding three goals in the second period to put the game out of reach.  Of the seven goals scored by Wayzata, all were scored by different players. A testament to their balance and unselfish play.

BHS Let's try that again. Red Knights too much for #2 Chan. BSM defense the key in this one. BSM > Chanhassen (4-… https://t.co/inUxEmjMpg