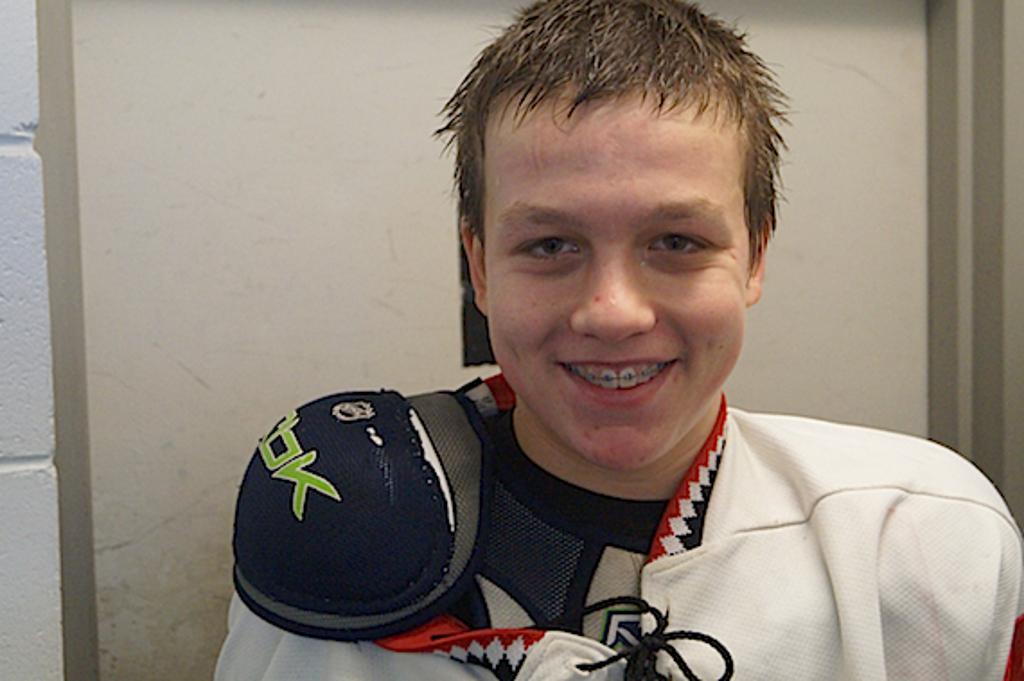 Matthew Stanton caught smiling after his game winning goal versus #1 Wayzata on Friday.

In what amounted to be the Championship game of the Midwest Regional, the top two teams in Bantam B faced off Friday.  In nearly 40 combined games these teams had only one loss.  And for the record, Stillwater and Wayzata haven’t exactly played soft schedules.

Historical Background: A good number of the kids on these two teams have a little history… Stillwater was #1 and Wayzata #2 going into the state tournament two years ago in Pee Wee B1 played in Stillwater. Stillwater took over the #1 spot that year after winning the OMG Pee Wee B1 tourney in the end of January… a spot held previously by Wayzata who got knocked out of the tourney in an upset by none other than the other Stillwater Pee Wee B1 team. Stillwater ended up losing in the Semi’s and Wayzata won the state. Last year Wayzata and Stillwater were in the same region in Pee Wee A…in a mild upset Wayzata beat Stillwater in the first game of regions but Stillwater came back through the losers bracket beating Wayzata in a rematch to end the Trojans season… Both of these two teams have a good number of first year bantam players (more than 10 for each team…) who have seen plenty of each other over the years even though they are on opposite ends of the metro!
The game started out fast.  Stillwater scored within the first minute to make it 1-0.  The game stayed that way for most of two periods.  Each team having a slight advantage in play in both periods, but no out right dominance.  As a whole not a lot of great scoring chances for either team.  The speed of play was that of a Bantam A game, both teams lack a physical presence of a Bantam A team, but skill and speed was a plenty.

Speaking of skill and speed  Wayzata’s Seth Pribbernow got loose behind the Stillwater defense late in the second period and beat Stillwater goalie Mitch Bailey over his left shoulder.  At the end of two, it was tied 1-1. Wayzata began to take control of the play in the third period, getting several great scoring chances and controlling the offensive zone.  Bailey was up to the task making nearly 30 saves in this tough fought battle.

Controversy Part 1: When two top teams play each other and it’s tied late, you can feel the tension in the rink mount.  With less than five minutes to play Wayzata found themselves knocking the Stillwater doorstep.  With three Trojan attackers hacking away at a game winning goal, Bailey’s mask came loose and hit the ice.  In a three to five second flash, Wayzata got what seemed like the game winning goal.  After a quick huddle, the lead official waved off the because he realized what had happened to Bailey.

Controversy Part 2: Minutes later it was Stillwater’s turn to strike.  On a pretty three touch passing sequence a Stillwater forward attempted a wrap around on Wayzata daredevil goalie Jaxson Stauber.  To which Stillwater thought went in.  Neither Stauber or the lead official agreed.  Some Stillwater fans are still scratching their heads.

Near the end of regulation Wayzata had one more golden opportunity for the win.  A Wayzata forward was open on the backdoor and slid it past a sliding Bailey, but just wide. In the end, it was 1-1. After a short break, both teams sent out four attackers for a five minute overtime.  With no break after two periods the players were exhausted, the ice was slow and the scoring chances were slim despite several odd man rushes. Each of these rushes would end with a wimper or weak shot on goal. Until very, very, very late in the overtime session. Matthew Stanton got his hands on a loose puck and headed toward the net two on one.  Stanton wound for a slap shot that sizzled toward the far post past Stauber.  Of which the puck hit and caromed into the net with six seconds on the clock and the win for Stillwater. Just like that it was over and so was Wayzata’s undefeated season. Final score 2 to 1 Stillwater.