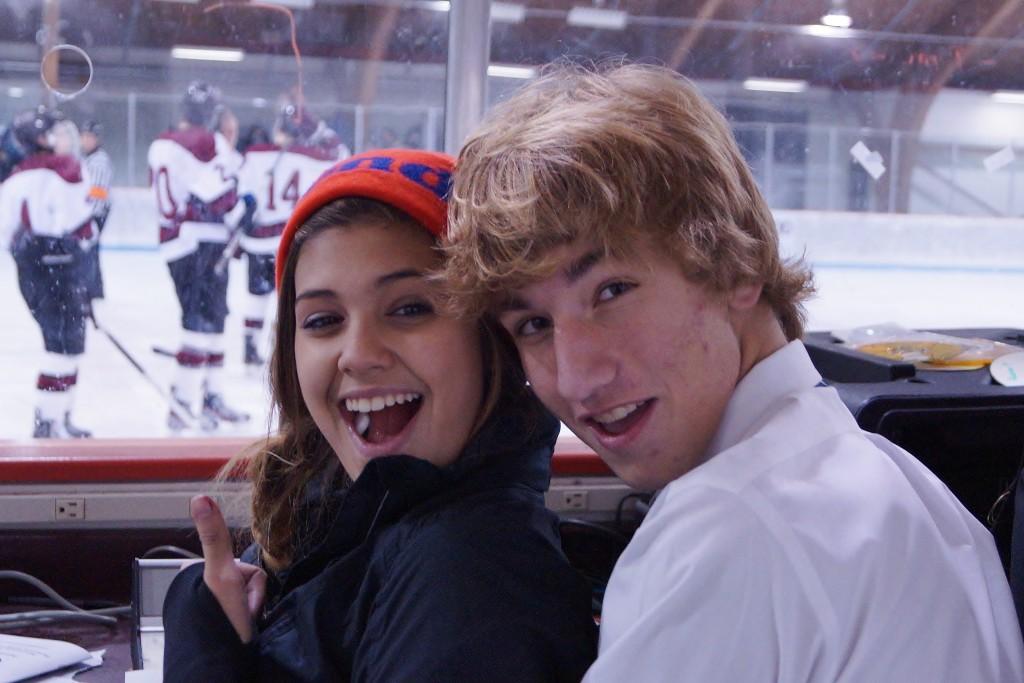 Sometimes when I go to watch a game, events and things happen to change a story from what was intended to a story that has a different meaning. This past weekend’s storm altered my plans, but left me feeling better about this time of the year.

The first winter strom slowed down everything his weekend. I ended up caught between storms, grandkid’s games and a desire to watch the Shattuck-St. Margaret’s Bantam team play Russell Stover.

Both teams are ranked in the top 20 of the USA 98 Tier I rankings. Shattuck is ranked #3 and the Russell Stover team ranked #18 going into the three friendship game series played this past weekend at the Shattuck’s “old” rink in Faribault. The 3:30 (I thought) Saturday game started at 4:30. My mistake and that and pending snow meant I couldn’t stay much beyond the first half of the game.

But in the middle of all the running from arena to arena this past 10 days, I was caught totally off guard by Christmas trees. The “new” Shattuck arena was stuffed with Christmas. There were three decorated trees actually in the arena. And in Shattuck’s “new arena”, they had put out hot cider and hot chocolate and ginger cookies at a table near the entrance.

The “new arena” was decked out in holiday themes and people started to steam into the arena seating for a holiday ice skating show, no tickets necessary. Instead the SSM people gave you candy canes to eat as you watched the performance.

Everything was so unexpected. I felt like the “Grinch”. My “puzzler” was sore.

Next door in the “old arena”, the Russell Stover and Shattuck-St. Mary’s team were preparing to do battle. I walked the short distance thinking how could it be so. “An arena that came with ribbons! It came with tags and Christmas trees! It came with packages, and boxes and bags! My puzzler was puzzling some more.

The Shattuck bantams have three Minnesota kids on their roster this year; Mason Palmer (Plymouth), Ryan Lindgren (Lakeville), goalie Ryan Edquist (Lakeville). And the “old arena” is old. For whatever reason, the dinginess seems to go hand and hand with the toughness of the games played there.

The boards are blacken along the ice with puck marks and stick marks made over the years. Some marks were probably made by Parise-J. P. that is when J. P. skated for the North Stars in the early seventies. Zach probably added a few.

The Shattuck bantam team was led by Jordan Greenway last year. This year they are led by JD Greenway, his brother. Jordan was good size player last year and led the Shattuck bantam team in scoring; but JD is just large. His whole presence on the ice is large and from the length of his hockey hair, it should have been March, not December.

Two minutes later, Shattuck’s Brett Crossley (Cole Habour, NS) picked up the puck behind the Stover’s net, fed a quick pass to Sam Shrout (Southlake, Tx) in the slot who banged it in the net. Shattuck went up 2-0.

A minute later with Shattuck still pressuring the Stovers in the Russell Stover zone; their Stover’s coach called time out and gave his team a stream of invective language. He really chewed them out and sent them back out on ice. It was “Grinchville”. The Stovers played better after that. The first period ended with Shattuck up 2-0. There was a hockey game brewing. Sadly, I had to leave.

One more stop at the “new arena” to sort out this Christmas feeling. The festivities were in full swing with skaters performing to the “Nutcraker’s Suite”. Tins of candy canes were on each table in the entry way. The outdoor Christmas tree was lighted. I stepped inside and took a picture of the skaters on the ice and left.