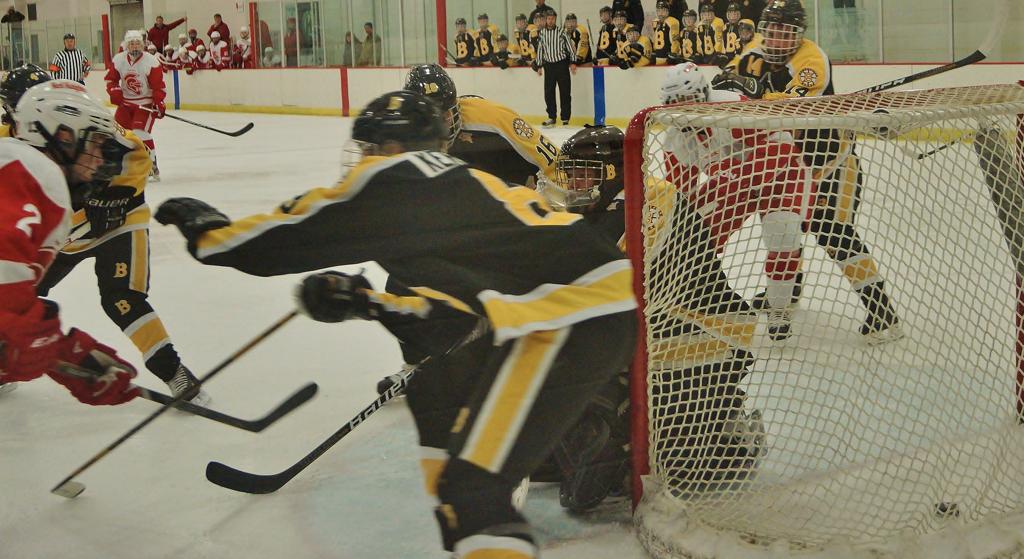 Benilde-St. Margaret”s Chris Hickok (left) watches his shot slide through the goalie for the Red Knights first score to tie the game 1-1

Top ranked Benilde-St. Magratet’s clashed with Burnsville last night at the St. Louis Park Ice Arena. On a sheet of ice in front of a wall of 1300 roaring fans, the Red Knights buried the Blaze scoring five second period goals. The Blaze never got roaring and Tyler Sheehy (a former YHH top peewee pick) was a marked man all night by the Red Knights’ defense.

The Blaze opened their season a week ago, losing to Hill-Murray 2-1 and then upset (then #3 ranked) Eden Prairie 5-2 last Tuesday. The Blaze are tough this year despite losing leading scorers Corey Chapman, Hunter Anderson, and Mason Wyman from last year’s team. The core of Burnsville’s great peewee A/bantam A teams are beginning to show up at the high school level.

Tyler Sheehy, leading that core, has garnered most of the attention, but Sheehy was a second line player on the youth teams behind Cole Borchardt and Brock Boeser. Borchardt saw part time play last year as a Blaze, but is ready to step into a full time role joined by Boeser from last year’s Bantam A team.

With this year’s bantam A team doing well, the Blaze should make a run for the state tourney for the next three years.

Benilde-St. Margaret’s is the defending state champions and are bent on keeping the title this year. The Red Knights moved out of the North Suburban Conference this and are playing as an independent team. The Red Knights will still be playing in Section 6AA in the state tourney precursor (Section 6AA includes Wayzata, Minnetonka, and Eden Prairie among others). As a result, the Red Knights have taken on a tough schedule playing teams throughout the state. They beat Moorhead 6-1 at Moorhead in their opening season game last Saturday.

The first period got off with a bang for Burnsville. Thirty seconds into the period, the Blaze’s Boeser picked up a rebounding puck to the right of the Red Knight’s goalie Andrew Sprang and backhanded the puck into the net to give the Blaze a 1-0 lead.

After that score, the game became a fast paced transitional game for the next few minutes, but the Knights were gradually building pressure on the Burnsville defense. They started to trap the Blaze in the Blaze zone by playing high, forcing the puck low, and trapping the Blaze defense when they attempted to breakout either right or left.

The result was no team could sustain possession in the Blaze zone, but the puck never cleared the zone, until the Blaze made a mistake in attempting to clear the puck along the end boards right with no Blaze defender there. It ended up on the Knight’s Chris Hickock’s stick on the end boards. With no Blaze defender there, Hickock soloed behind the net, read Burnsville’s goalie Chris Mellon, and beat Mellon on a wraparound shot to tie the game 1-1. Zack Hale got the assist.

The Red Knights pressured the Blaze for the next few minutes, almost scoring a power play goal. Halfway through the first period, the Blaze took the lead again, scoring on a power play. This time, the Blaze worked the puck into the slot area and took a shot on goal. The puck was neatly tipped over Sprang’s save attempt on the original shot. It was a quick 1-2 goal, neatly executed. The Blaze led 2-1. Ian Taylor scored the goal, Tyler Sheehy and Teemu Kivihalme (don’t you love the Finish names) got the assists.

The first period ended with the Blaze leading, the crowd into the game, and everyone expecting an exciting end to the game. It didn’t happen.

In the opening minute of play, a Red Knight came flying done the right side, beat the Blaze defender on the outside and put a hard shot on Mellon. Mellon couldn’t control the rebound and it bounced on to the ice in the front crease where Grant Besse rapped the puck into an open net. Dan Labosky, always a team leader in assists, got the assist. That tied the game 2-2.

Benilde continued to pressure the Blaze, keeping the puck on the Blaze half of the ice. The Burnsville forwards simply could not beat the Knights defense at the Blaze blue line. If the Blaze dumped the puck into the neutral zone, they couldn’t regain control to carry on the attack. Worst, the Blaze defense went into a shell.

The Knights scored twice in two minutes. They jammed the puck in the left side of the net at the 11 minute mark to take a 3-2 lead. Naas got the goal; Alec Baer the assist. Two minutes later, Baer scored. Baer picked the puck up after a Burnsville rush failed to score, and counter attacked. He skated through multiple Blaze defenders to put the puck in the net and give Benilde a 4-2 lead. Naas and Evan Fleming got the assists.

To their credit, the Blaze came back to score a power play goal. This time Sprang couldn’t control the initial shot and the puck bounced lose in front the net with multiple players crashing for the puck. The Blaze’s Sam Dockry ended up putting the puck in the net, Sheehy and Boeser got the assists. The Blaze had cut the lead to 4-3 with three minutes left in the second period.
Then Burnsville lost the game.

The Red Knights countered a minute later with two goals in twenty seconds. The first was the game killer. Spencer Naas scored BSM’s second wraparound goal of the game. This time, no one read the goalie; Naas scored it by sheer physical strength and speed. It put the Knights up 5-3, Ben Newhouse and Seth Chumley got the assists.

The crowd was quiet from the start of the third period. Play became ragged. Six penalties were called, four on Burnsville. The game slowed.

The Blaze had a power play when the third started, but failed to sustain pressure on the power play after the initial attack. The Blaze chased the puck as the Knight ‘s killed the penalty. The game became a “fait accompli”.

With five minutes left in the period, Burnsville drew two simultaneous minor penalties creating a 5 on 3 power play for the Red Knights. This time, Labosky, playing the point on the power play, took the puck inside the blue line and walked it over to the slot. His move drew the left defense toward him. Labosky faked a shot to freeze the defense and fired a pass to Besse low left. Besse one timed the puck into the net bouncing it off both the high corners. It was a neat play and the Knights led 7-3.

With two minutes left in the period, the Blaze’s Ian Taylor scored his second goal of the game to end the scoring 7-4. Sheehy and Kivihalme got the assists.

Both Benilde-St. Margaret’s and Burnsville have lost kids to the USA National teams this year that could have played on these teams. Benilde has lost Ryan Collins and Jack Glover to the National U-17 team and Burnsville has lost two to the U-18 team, Hudson Fasching and Clint Lewis. Wonder what this game would have been like if those kids were playing at St. Louis Park last night?

Tyler McCracken scores for North Dakota! Bringing the score 4-3 to against the Sharks in the 2nd half of the BEL Qu… https://t.co/pKnqHjG1Tq