Orono’s Best of the West Tournament 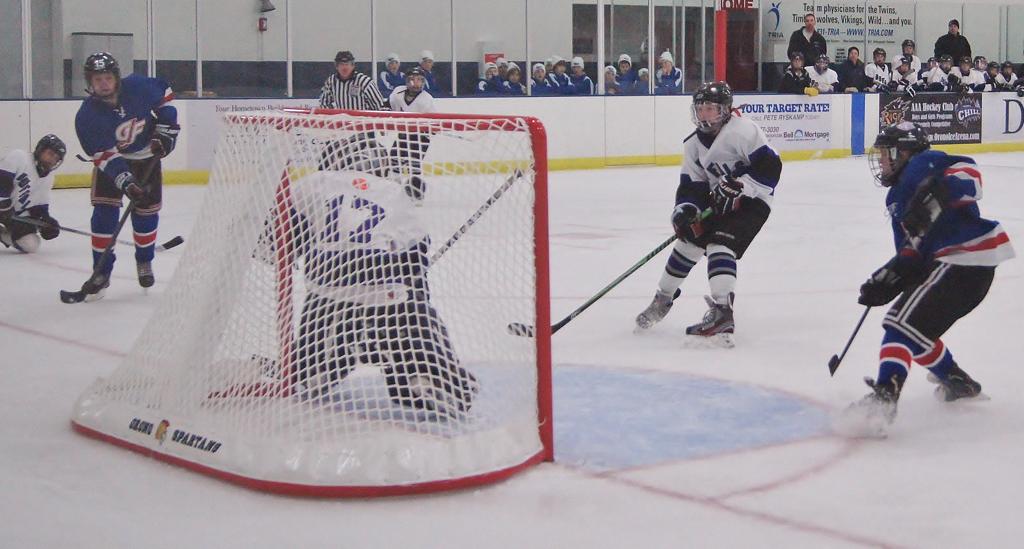 Two struggling teams, Buffalo AA and Kennedy A played in the peewee A opening game. Both teams have similar records in their leagues; the Bison are 1-3 in D5’s peewee AA gold league, Kennedy is 0-3 in the D6 peewee A league.

The first pool points goes up for grabs before the game starts. Under Orono’s modified points system for the tournament, each team sends three shooters out on the ice for a fast paced shootout (the next shooter must be ready to go 15 seconds after the previous shooter ends). During pool play, the shootout win gets two point towards determine seeding to the Championship round played Saturday night.

Each game is worth 10 points. With each team playing two pool games, twenty points total is on the line in determining the top four seeds among the 10 teams.

In the opening game, Kennedy A won the shootout.

Before the puck was dropped, Kennedy A had won two points. The Eagles went on to win the game 3-2 to take an additional 6 points and 8 points for the game. Buffalo was blanked, taking no pool points.

The second game matched Rogers AA against Osseo/Maple Grove A. Rogers has had a slow start in District 10 going 1-5-1 in their first 7 games. They tied Centennial A 1-1, beat Coon Rapids A 4-1, and lost to Blaine AA 6-0 in their last 3 D10 games.

OMG A has gotten off to a good start in District 3 regular season play. They beat St. Louis Park A 3-1 and Armstrong Cooper AA 1-0, tied Crow River A (also playing in this tourney) 1-1 and lost to Wayzata A 4-1. The Crimson had a tough Spring Lake Park tourney in early November, finishing tied for 7th place after losing 3-2 to Forest Lake AA and 4-0 to D3 rival Wayzata A 4-0.

All three OMG shooters scored in the pre-game shoot out to take 2 pool points. In the game, OMG had the early pressure and scored three minutes into the first period. Jack Dorholt scored the goal. Anthony Samson and Evan Stenslie got the assists.

With a minute left on the clock in the opening period, Rogers’ Gabby Billing scored to tie the game. She beat the OMG defense on a rush and beat the OMG goalie with a top shelf backhand from the right side of the crease. The first period ended in a tie, 1-1. Billings scored a shorthanded goal.

That ended the scoring for the game. The two teams tied 1-1. The second period was evenly skated. In the third period, Rogers had to kill a 5 on 3 penalty situation. OMG’s big defense man moved to forward in the last minutes of the third period. He pressured the Rogers defense in the Royals’ zone, but OMG could the score.

OMG had difficulty in controlling the power play. Their points could not hold the zone under pressure. Rogers played a tough, steady game. OMG won 6 pool points for their effort (3 for the tie, 2 for the shootout, and 1 for less than three penalties). Rogers won 3 pool points for the tie.

Orono A and Northfield A played the third peewee AA/A game of the day. Orono A had a good Hopkins tourney over the Thanksgiving holidays. They beat Anoka AA 4-3 in their quarterfinal game, lost 4-2 to Edina A, and beat Jefferson AA 2-1 for third place. They got off to a slow start in D3, losing to the Mpls Storm A 5-2, tying Crow River 3-3, and losing a tough 1-0 game to OMG’s AA team. They have won their last two games beating Crow River 6-2 in a return match and Hopkins 7-1.

Northfield plays out of District 9. Orono would be the Raiders first real test of the season. The Raiders won their first five games before losing to Mankato A 6-2 last weekend.

Orono won the shootout point and won the game 6-2. The Spartans jumped out to a 4-0 lead in the first period. Four Spartans scored in the opening period. Blake Weyerhauser scored 90 seconds into the first period. At the 9 minute mark of the first, Orono added three goals in a two minute span.

Denny Ekertain walked in from the left side of the Raider net and shot. The puck found a crack in the Northfield goalies’ position. Orono went up 2-0.

A minute later, Davy Burns scored for the slot high right to give the Spartans their fourth goal. The first period ended with Orono up 4-0.

The Raiders stated to skate in the second period. Northfield scored twice. Garrett Sawyer scored in the opening minute of the second period. At the 9 minute mark, Jacob Halverson made a nice rush, beating the Orono defense, to score. Between those two goals, Orono’s Brenden Darby scored. The second period ended with Orono leading 5-2.

Orono added a goal in the third period to win the game 6-2. Orono ended up with 9 pool points for their effort, Northfield had one.

The last two periods were evenly played between the two teams and both teams showed that it was an early season game. The play was ragged at times with stoppages, missed passing opportunities, and failures to handle the passes. Both teams have talent.

The fourth game matched the Omaha Lancers AA against Crow River. The Lancers are currently the 10th ranked USA 00 Tier 2 team in the nation (out of approximately 550 teams). The Lancers just played in their silver stick qualifier winning all four games to bring their season record to 12-2-2. They play AAA organizations and lost to the Madison Capitals 00 AAA team 4-2 and tied the Capitials 5-5 in early November.

Crow River has a 2-5-2 record in the early season and are coming off of two tough D3 losses (Mound/Westonka 4-3 and Wayzata AA 3-2). This was predicted to be the best game of the opening round. It was.

The Lancers won the pre-game shootout. They opened the first period with a goal to take a 1-0 lead. The Lancers’ Thomas Jarman scored from the blue line. His shot fluttered in a high arc, flying over the Crow River goalie, and into the net. The goalie never saw the shot and didn’t realize the puck was in the net.

After that goal, Crow River drew four successive penalties and spent the remainder of the first period playing shorthanded. They killed all four penalties. The period ended with Omaha ahead 1-0.

In the second period, the Tigers stayed out of the penalty box. As a result, they dominated play controlling the puck in the Lancers’ zone. But Crow River couldn’t score. The Lancers started to “fly” one forward out of the zone to break pressure. The first 5 times, the playing ended with an icing call. The pass failed to connect.

The sixth time, with 2 minutes remaining in the period, the pass connected. Cooper McDermott got the breakaway goal to put Omaha ahead 2-0 as the second period ended.

Crow River’s Steven Hajas scored the Tigers only goal of the game in the opening minute of the third period. They couldn’t get another. Both teams went scoreless after that. Omaha won the game 2-1.

The Lancers took 9 of the 10 possible pool points. Crow River failed to get a pool point.

It was a game that matched size and strength against quickness and finess. First period penalties neutralized the Tiger size, the second period dominated by the Tiger size, and the third period played evenly.

The fifth game matched Buffalo and the Grand Forks Seawolves. The Seawolves usually make one trip into Minnesota a year, so it was a treat to see them show up in the Orono Tourney. They had a 5-1 record coming into the tourney. The Seawolves had beaten Rosemount AA 5-2 and East Grand Forks 8-1 two weeks ago. Their single loss this season was to their rival Grand Forks Greyhounds last week 4-1.

The Seawolves and the Greyhounds are in the same association.

The Seawolves played Buffalo AA in an evening game. Buffalo AA had lost to Kennedy A in the noon opener. The Bison are off to a slow start in D5 this year. For the past few years, that has been a Buffalo trait, start slow in D5 and a strong finish. They beat Redwood Falls and then lost three straight games, St Cloud AA 10-1, MAML AA 6-4, and River Lakes AA 3-2.

The Seawolves traveled 300 miles to take the ice at 7:30 pm. They wasted little time scoring 5 goals in the first period to take a 5-0 lead. Braden Costello got two of the goals; Judd Caulfield got the opening goal, Tyler Heffarth and Ethan Scheffer scored.

The Seawolves added a goal in the second period, skating off a 5 minute major penalty to take a 6-0 lead.

They won the game 8-1 and were by far the best team in the opening day games. But the Seawolves took only 6 pool points with their win and will need to rack up the points against Orono in Saturday’s game to advance.

The final game of the day matched Rogers AA and Proctor A. Proctor A has been a pleasant surprise in the early season. The Rails (named after the switchyard, not the bird) have beaten Hermantown A’s twice this season 2-0 and 8-2. They also beat the Duluth East A team 6-2. Their two losses were to AA Hibbing 2-1 last weekend and to Denfeld A 3-0.

Proctor won the shootout, but Rogers came back with two third period goals to win the game 2-1. The Rails have an impressive passing game and can move the puck. As a result, they pressured Rogers early in the game, controlling the puck for long periods in the Royals’ zone. But the Rails couldn’t score.

The first period was scoreless. Proctor scored early in the second period. Evan O’Conner got the goal, Jordan Linder the assist. Going into the third period, the Rails led 1-0.

Three minutes into the third period, Rogers tied the game on a goal by Nicholas Johnson. Mat Schaeffer got the assist.

The game breaker came with 5 minutes left on the clock. A Roger forward, trying to beat the Rails defense in the Proctor zone, realized he was not going to break the defense. He flopped on the ice and laid there hoping for a penalty. The ref called two minors on the Rails and put the Rails in a 5 on 3 penalty kill for 90 seconds.

The Royals scored with 10 seconds left in the power play. This time Schaeffer got the goal and Johnson the assist. The winning came off a shot that was going wide right and bounced left at a weird angle and ended up in the net. The Royals won 2-1.

Rogers took 7 pool points in their second game of the day. They ended pool play with 10 points. Proctor got 2 points for winning the shootout. The Rails will play Crow River Saturday.

At the end of the first day, Kennedy seems positioned to advance to the championship round. Kennedy needs a good game against Northfield.

Omaha and Osseo/Maple Grove A play each other in a game that will determine who advances. The Grand Forks Seawolves play Orono in their second game in another championship round determination game. Three of these four teams (Omaha, OMG, Grand Forks, and Orono) will likely advance with Kennedy to the championship semifinals played Saturday night.