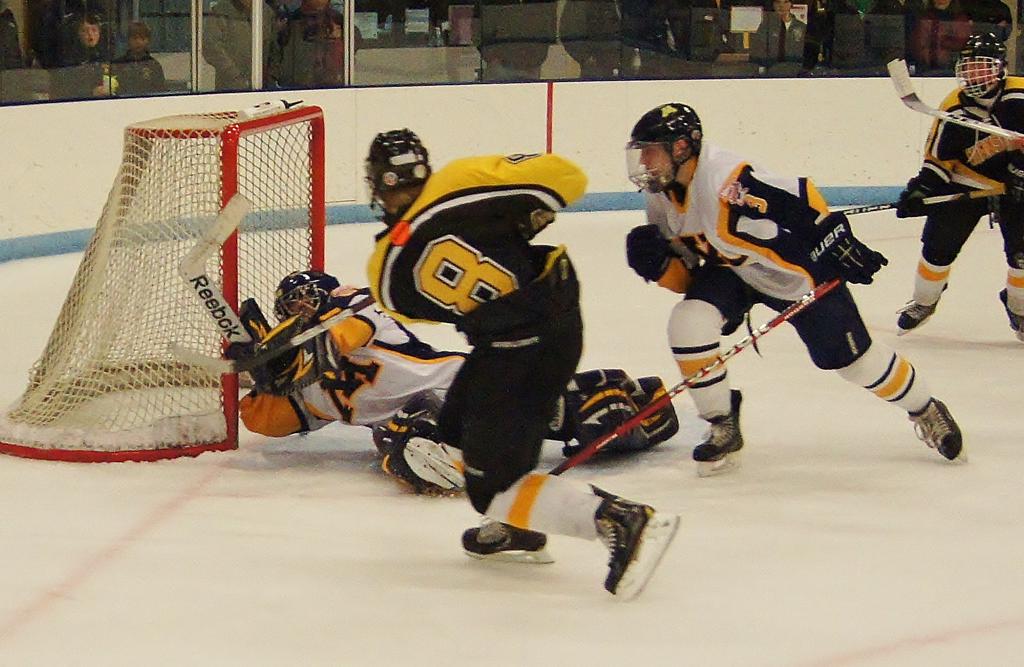 The Burnsville Bantams and the Lakeville South Peewees needed tie breakers to get to Sunday’s championship round. Earlier Saturday, most people at the tourney Saturday thought (or hoped) that these two teams would go home after the final pool games were played.

Two pools were dominated by a single team. Mahtomedi Bantam A has had a great opening season and came into the tourney with a 7-1-1 record. They won their pool beating Hermantown AA 2-1 on Friday, beating Andover 3-0 in Saturday’s morning game and tying Lakeville North AA 3-3 in the evening game. The Zephyrs took the #3 seed.

Chaska AA opened pool play Wednesday tying Eastview AA 3-3, beating the Wayzata A team 4-0 on Friday, and beat Woodbury AA 4-3 on Saturday to win their pool and take the #2 seed.

The final two seeds were determined by Saturday’s final pool game between Anoka AA and Burnsville AA. Both teams had won their first two pool games. Anoka beat the Minneapolis Storm A 3-1 and Blaine AA 3-1 on Friday. Burnsville AA beat the Storm A 7-2 and Blaine AA 4-3. It looked like “a winner take all” game, the loser would go home. Hermantown AA appeared to have the wild card seed for Sunday’s games.

Anoka AA won 4-2 and took the #1 seed; Burnsville AA took just enough pool points to tie Hermantown AA for the wild card and won on the “goals scored” tie breaker to move on to Sunday and send the Hawks home.

In Sunday’s championship round semifinals, Burnsville AA came back to beat Anoka AA 4-0 and Mahtomedi A easily beat Chaska AA 5-1. That set up the championship game between the Blaze and the Zephyrs. Anoka AA and Chaska AA played for third place.

Mahtomedi was the surprise in the tourney. They had played great defense in their first four tourney games led by goalie Will Swanson. The Zephyrs’ defense had given up just 5 goals. Burnsville had the firepower scoring 17 goals in their four tourney games.

It looked like a classic matchup, a strong defense versus a strong offense. But the refs stepped in. In the first 14 minute period, eight penalties were called, five on Mahtomedi.

The Zephyrs drew the worst penalty, a checking from behind and game misconduct penalty, one minute into the 14 minute period. The Zephyrs’ remaining penalties were staggered such that they spent most of the opening period on the penalty kill.

As a result, Burnsville just attacked the Zephyr zone in wave after wave often getting two or three shots in combination at the Zephyr net. Still it took the Blaze almost 10 minutes to score their first goal.

The Zephyrs’ Swanson was that good in the net. The Blaze’s Eric Otto scored on a shot from deep in the left corner. The puck “fluttered” at little and slowed. Swanson glove save attempt was a little too quick and the puck snuck into the upper left corner caroming off Swanson’s glove. Otto scored unassisted.

Two minutes later, Burnsville’s Colton Kirschbaum scored on quick shot off a rebound from the slot. The Blaze’s Gavin Wagner and Jake Thomas got the assists. The first period ended with the Blaze leading 2-0. They out shot the Zephyrs 15-1 in the period.

At the 8 minute mark, Burnsville scored. This time Thomas got the goal and Kirschbaum the assist to put the Blaze up 3-0. Fifteen seconds later, the Zephyrs drew their second major penalty for checking from behind.

A minute into the penalty, the Blaze’s Dalton Weigel scored a power play goal unassisted. Weigel picked up the puck in the slot area in front of the Zephyrs’ net and powered the puck past Swanson for the goal and ended up flying into the end boards. The Blaze led 4-0 as the second period wound down. Burnsville outshot the Zephyrs 33-3 in the first two periods. In the 28 minutes of play, the Zephyrs played an estimated 8 minutes at full strength.
The Blaze added two goals in the third period to win the game 6-0.

In the Third Place game, Anoka AA beat Chaska AA 2-1. The Tornados were down 1-0 going into the third period. Anoka tied the game with 7 minutes left in the period. Reese Grailer scored the goal on pure hustle, beating the defense to a loose puck in the slot and flipping the puck over the sprawling goalie.

Benjamin Saba and Jack Giddings got the assist. With two minutes left in the period, Anoka’s Taylor O’Neill scored the game winner on a shot into the upper half of the Hawks net. Colin Hans got the assist.

Eastview AA beat the Mpls Storm A 4-1 in the first semifinal game Sunday morning. The Lightning applied pressure in the first period. They controlled the puck in the Storm zone for most of the period but could not score until defenseman Joe Stillings took over. Stilllings rushed through the Storm defense to score an unassisted power play goal with three minutes left in the period.

A minute after Stillings’ goal, Eastview’s Luke Barron scored to put the Lightning up 2-0.

The Storm came back to close the gap to 2-1 in the opening minutes of the second period. The Storm’s Sande Spencer scored; Jimmy Schmiesing got the assist.

Four minutes later, Eastview’s Jake Mccormick scored to give the Lightning a 3-1 lead. Owen Dauk got the assist. It was the Lightning’s only even handed goal. The second period ended with the Lightning leading 3-1.

The Lightning’s Noah Desroscher scored the only third period goal to end the scoring 4-1. Deroscher took a pass from Chris Fan in the slot area and beat the goalie on the left side. Fan got the assist.

Lakeville South AA scored three first period goals to jump out to a 3-0 lead over Hastings AA. The Cougars added two goals in the second period, and three goals in the third period to win 7-1. Ten Cougar players either got an assist or a goal. Jack Olsen led the Lakeville South scoring with one goal and two assists. Dawson Klein scored two goals for the Cougars.

Hastings AA’s only bright spot was Jaden Axelrod. Axelrod scored the only Raider goal. It was his second shorthanded score in two games.

The Championship game was as good as expected. Eastview AA scored in the first five minutes of the opening period to take a 1-0 lead. Stillings scored the unassisted goal. Two minutes later, South tied the game on a goal by Ty Black. Dawson Klein and Jack Olsen got the assists.

South had pressured Eastview AA in the opening period, out shooting the Lightning 13-4. But after that opening flurry of shots, the game settled down.

Lakeville South AA scored the winner when the Cougar’s defenseman Jack Olsen scored unassisted with 4 minutes left in the second period. Neither team could score in the third period. It was a cleanly skated, fast paced game. The Lightning out shot the Cougars 9-8 in the last two periods.
The Mpls Storm A beat Hastings AA for third place.

In pool play, Edina White beat Minnetonka 5-1, Farmington 6-2 and Burnsville to sweep their pool. Prior Lake won their pool. Burnsville and Lakeville North playing in the same pool as Prior Lake, took the #3 and #4 seeds.