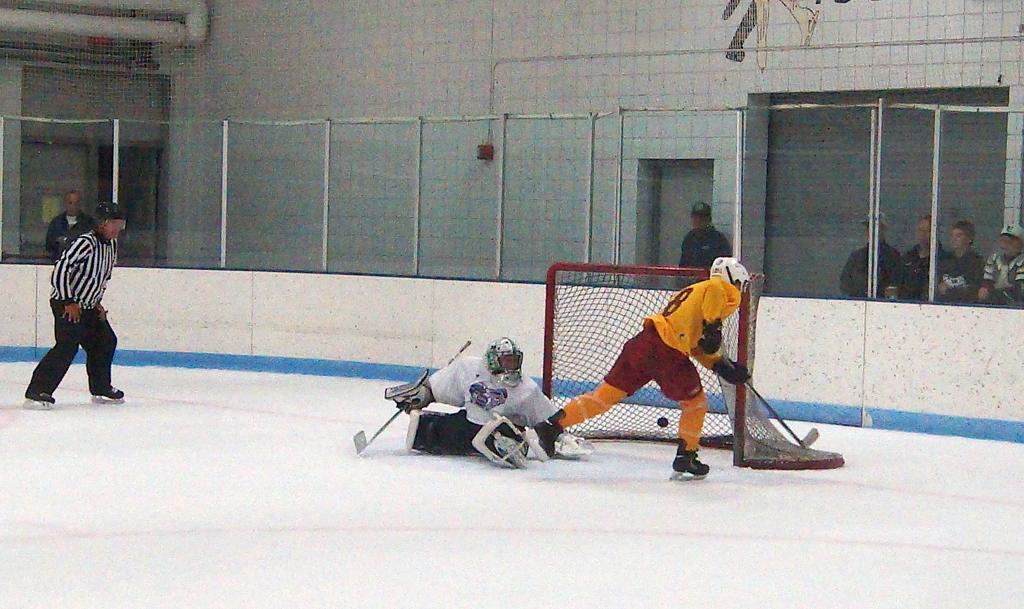 Nine games were played Saturday in the YHH PeeWee Challenge at Bloomington Ice Garden. The top teams in both boys and girls began to separate themselves with three still alive on the Boys side and the two finalists are set for the Championship on Sunday morning.

The Mavericks on the Boys side controlled their destiny with two wins to capture the Boys title. The Gophers on the Girls side had their sights on sweeping the Girls pool. 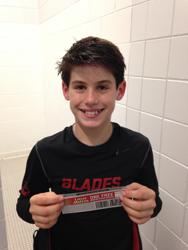 The Huskies got two unassisted goals by Ben Dexheimer to beat the Bulldogs Saturday on Rink 2 in Bloomington.  His first tally was  pretty end to end rush where he beat Zach Wiese on the short-side. A minute later, St. Paul phenom Matt Gleason evened the score 1-1 on a pretty one-timer feed from Will Magnuson. The second half was a back and forth even battle with both teams with opportunities but nothing to show for it. Until Dexheimer got loose in the slot after weaving through two Bulldog defenders and fired another wrist shot past the Bulldog goalie for the win.

Game 2...Irish score 5 in the Second half to beat Gophers

Coming off tough losses the night before both teams came out hungry. For 18 minutes, both teams were starving until Prior Lake's Owen Neuharth popped in a goal on the Power Play for the Gophs to give them a 1-0 halftime lead. The rest of the game was all Irish. Early in the second, Brett Oberle scored and nine seconds later Brainerd's Westin Andres knocked up the eventual game winning goal. Oberle would go onto get a hat trick for the Green Machine as they rolled to a 5-1 win over the Gopers.

The Mavs with a championship within their grasp with two wins, scored three of the games first goals leading 3-1 after one (goals by Streeter, Miller, and Overman). But the second half was the Matthew Gleason show. He score two goals including the Game tying goal with 1:25 to go for the Hatty. In the overtime, the Dogs got caught for too many men and were forced into a shorthanded situation to end the game. Killing the penalty propelled them two goals in the shootout, one by Gleason - no surprise - and the game winner by Ryan Mulrenin. The win put the Bulldogs in a position to win the Challenge with a win over the Gophers and some help from the Irish on Sunday.

Game 4...Huskies take out Gophers, control their own Destiny

For the third game in a row, the Gophers got out to an early lead. Minneapolis' Will Svenddal opened things up with a nice shot that Cooper Olson. The Huskies would battle back and score the next three two by Stillwater's Charlie Strobel and another by Billy Rose who left the rink with a goal and two assists. Johnny Mittelstadt would make things interesting scoring on the Power Play in the middle of the half. But Noah Tussey would complete the All District 2 scoring line for the Huskies making it 4-2 with five minutes to go.

Game 5...Irish win their second of the day, knocking the Mavericks out 1-0.

Both teams came into the final game of Saturday needing a win and some help on Sunday to get the Champions T-Shirt. A low scoring affair would benefit both teams in the Goals Against Tie Breaker system. Both teams took the defensive charge to new heights...or new lows if you are a fan of high scoring games. Tyler Oakland got the lone goal of the game after he picked up a loose puck in the slot and rifled a wrist shot top shelf late in the first half. There was no more scoring the rest of the way. Both teams had flurries but neither team was able to convert. 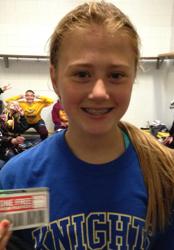 Mackenzie Bourgerie had 2Gs for the Gophers Saturday, she was our Lotzza Motzza POTG (nice photo bomb work by her teammates, too)

Game 1...Bulldogs stave off Huskies in first and cruise win 5-0

Facing elimination with a loss, both teams battled hard to get to 1-1 on Saturday afternoon. Neither team could get the puck past the goalie, but the Huskies were the one's shaking their head. Bulldog Goalie Anna LaRose turned away 17 shots to keep the score 0-0 at halftime. In the second half, the Bulldogs turned tables on the Huskies outshooting them 15-4 and scoring five unanswered goals. Madison Mashuga got the first (and the GWG) and a minute later Lindsey Booth busted out giving the Dogs a 2-0 lead early in the second half. With each goal, the Bulldog's confidence began to increase with each shift. Scoring three more goals in the next five minutes (Koehler, Alvarez, and Nelson each scored)...the Bulldogs cruised to 5-0 lead setting up a Play In game with the Mavericks later in the evening.

In a matchup of two talented teams with a lot to play for in a short 4 game tournament. The Gophers and Mavericks both won Friday, making this a huge game for both teams. Mackenzie Bourgerie scored on the first shift for the Gophers, but Kensie Malone answered for the Mavericks 19 seconds later. The two heavyweights (talent that is) would battle for the go ahead goal when Lindsey Maloney would knock in a loose puck in front to give the Gophers the lead for good 2-1. With 13 seconds left in the period, Jenna Hartung would get on the scoresheet for the Gophers. Down 3-1 at halftime the Mavericks would get 17 Shots on Goal in the second half and only muster one goal and lose 4-2.

In both teams second games of the day, the Gophers came out flying scoring three goals in the first five minutes. First Brieja Parent scored in traffic and then Emily Roder banged home a rebound to give the Maroon and Gold a quick 2-0 lead. Later in the period, CeCe Ziegler did what CeCe Ziegler does best. She stickhandled her way out of a tight spot in front of the Gopher net and took it end to end in highlight reel fashion giving the Gophers a 3-0 lead. The two teams would trade goals in the second half (Einan and Shearan) to come a final score of 4-1.

The Mavs/Bulldogs played what amounted into a Semifinal game on Saturday night. Both teams were 1-1 and with the winning team going to the Championship on Sunday. The Mavericks, coming off a tough loss to the Gophers scored two late goals in the first period, one on a pretty breakaway goal by Sydney Langseth and the other by Jordann Swingle. Early in second, the Mavs put the Bulldogs away with two early goals by Edina's Sophia Doll and Lily Delianedis to make it 4-0. Bridget McGuire and Lindsey Booth would score for the Bulldogs while Delianedis and Doll would boost their point totals with goals to make the final 6-2. 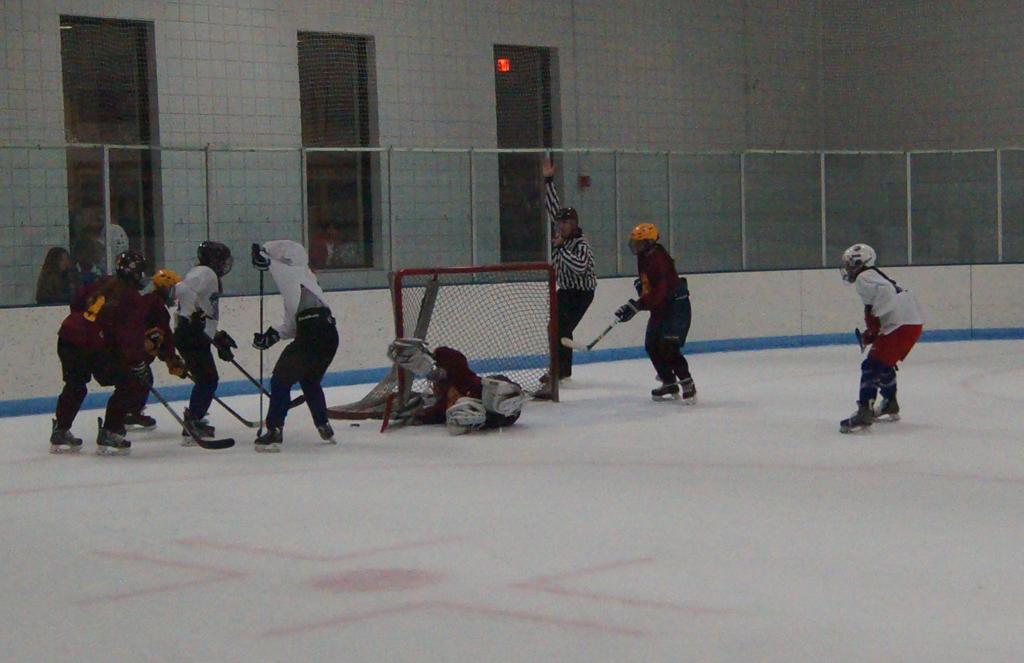 Josie Bothun with a big save for the Gophers Saturday.