Kenai River was in the Cities. Kenai and Apple Valley MN are the only two hockey teams to have brown and gold colors.

The NAHL's Minnesota Magicians played their home opening games last Friday and Saturday against Kenai River.  The Magic Men beat the Brown Bears Friday 6-4 and lost Saturday 5-1.  The split was enough to keep the Magicians in second place two points behind the division leading Wilderness.  Next Saturday, the Magicians travel to Cloquet to play the Wilderness at the Northwoods Arena in a clash of two teams that could be contending for the National Junior Title next April. 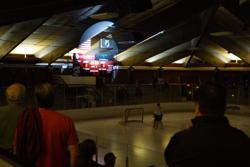 A quiet pause for our country before the game. A live performance of the national anthem ended with a ChIcago Blackhawk style rapping of the sticks.

In the first two games of a 30 home game season, the Minnesota Magicians tangled with Kenai River.  The NAHL franchise Brown Bears are located in the heart of Alaska's playground, Soldotna AK.  Soldotna is in the middle of the Kenai Peninsula (not far from Homer AK for readers who are "Deadliest Catch" fans).  Compared to the rest of Alaska, the Kenai Peninsula has mild weather year round; the peninsula stretches 150 miles, equivalent to driving from the Twins Cites to Duluth.  The Kenai River franchise is in its eighth year in the NAHL and has lost to Fairbanks in the divisional semifinals the past four years.

The Brown Bears have four returning players on their roster, but lost last season’s NAHL scoring leader Alec Butcher (66 points/24 goals in 60 games).  They have picked up some veteran help including defenseman Ben Campbell in a trade with Fairbanks.  Kenai gave up Jake Bushy to the Ice Dogs.  Campbell is from Duluth and played for Denfeld; Bushy is from Duluth and played for Marshall.  In the off season, Kenai picked up veterans forwards Maurin Bouvet/Amiens FRA and Logan Wending/Fairbanks AK.  Bouvet played for Corpus Christi last season and posted 25 points/10 goals in 53 games with the IceRays.

Forward Matt Rudin (last season 30 points/15 goals in 58 games) returned along with defenseman Tyler Andrews (16 points/6 goals in 51 games).  Both players are tied for the Brown Bears scoring lead going into this week ends games.  Goalie Zach Quinn returns.  Quinn was in the net for most of the games last season posting a 17-18-2 record giving up an average of 2.6 goals a game while stopping 92% of the shots on goal.  Defenseman Will Schwartz/Lino Lakes MN (Centennial) is on the Brown Bear’s roster.  Schwartz played for the Cougars in the Class AA state tourney at the Xcel last March.

The Magicians come into the Kenai River weekend games sitting on top the Midwest Division behind good goaltending, steady play at forwards, and up and down defensive corps.  The Magicians made some roster moves this week.  Forward Jack Murphy/Prior Lake was dealt to Kenai River before Friday’s game and played for the Brown Bears in Friday and Saturday’s games.  Defenseman Kyle Gonzalez/Chino Hills CA and forward Francois Lemelin/Petawawa ON were released.  Defenseman Spencer Kuhlman/Shattuck-St. Mary’s joined the team.  Forward Lukas Laub did not dress for the weekend and defenseman Nolan Schaeffer did not dress for Friday’s game.

Magicians' Jack Christensen watches Brandon Loven (to his left) bury his pass in the back of the Bears' net for a 1-0 lead Friday.

A tightly played first period produced only one goal. The Magicians Brandon Loven/East Grand Forks MN scored halfway through the period.  His goal came after Jack Christensen/Ridgefield CT and Kane Durment/Kildeer IL had teamed up to frustrate the Kenai River defense behind the Brown Bears’ goal.  Christensen snapped a quick pass from behind the net that Loven one-timed in stride beating Kenai’s goalie Zach Quinn/Westland MI.  The Magicians started quick in the period and dominated play for the first few minutes and ended the period dominating play.  Kenai had opportunities in the middle of the period but couldn’t beat Magicians’ goalie Jens Vaughan Ahrens.  The shots on goal were even 9-9.

The second period was a wide open affair with scoring triggered by penalties.  Seven goals were scored; three power play goals and three shorthanded goals.  The game was tied at the end of the period 4-4.  Kenai pounded the Magicians’ net at times, but Ahrens used his strength to hold position in the face of numerous Brown Bear rushes. He faced 21 Kenai River shots in the second period.

The second period opened with the Magicians on a four minute power play courtesy of a Brown Bear high sticking double minor at the end of the first period. The Magic Men had a horrible power play.  Kenai came out bent on not giving up a power play goal and got the tying goal when Maurin Bouvet/Ameins FRA scored unassisted after picking up a loose Magician pass at the Minnesota blue line and beating Ahrens on a solo rush.  Minnesota finally scored on the power play goal two minutes after Bouvet scored when Tony Uglem/Moorhead MN tipped in a shot from the blue line.  The Magic Men led 2-1. 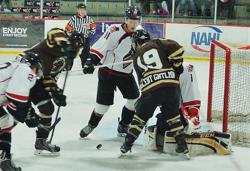 Magicians' goalie Jens Vaughan Ahrens faced up close pressure like this three foot shot most of the second period.

You can’t do that!

Leading 2-1, the Magicians lost their cool.  Thirty seconds after scoring to take the lead and with the teams at even strength, the Magicians drew a needless high stick penalty.  When the puck popped high and a Kenai player tried to use his hands to control the puck, he was rapped in the hands by a Magician trying to bat the puck out of his hands.  The Magician used his stick in front of the ref.

It took the Brown Bears’ Sam Carlson/Eagle River AK 30 seconds into the power play to tie the game 2-2.  Five minutes later, halfway through the second period, two Magicians were called for penalties at the same time.  The NAHL has instituted a NHL style of refereeing.  Plays can be reviewed during the game and will be reviewed after the game.  Refs and players will be talked to by the league's ref coordinator based on those reviews.  That results in the refs taking the time to review plays during the game.  That happened halfway through the second period.

Two Magicians penalties were called at the same time, one a high sticking and one a five minute major.  The major was the correct call when a Magicians’ defense man lined up a Kenai forward and delivered an elbow to the head (see picture).

The Magicians and Ahrens killed the 5-on-3 penalty.  As the first penalty ended, the Magic Men caught the Kenai defense forward just as the Magician player came out of the penalty box.  A lead pass led to a 2-on-0 rush.  Jack Christensen got the goal; Tayler Brierly/East Grand Forks MN got the assist.  Magicians led 3-2.  With the Magicians still man short on the five minute major, Kenai’s Jack Murphy/Prior Lake MN scored a power play goal.  Murphy hit a puck shot from the blue line three feet wide of the left post and tipped that puck into the net to tie the game (picture sequence at the end of the post).  The Brown Bears had just picked up Murphy in a deal with the Magicians before the game. 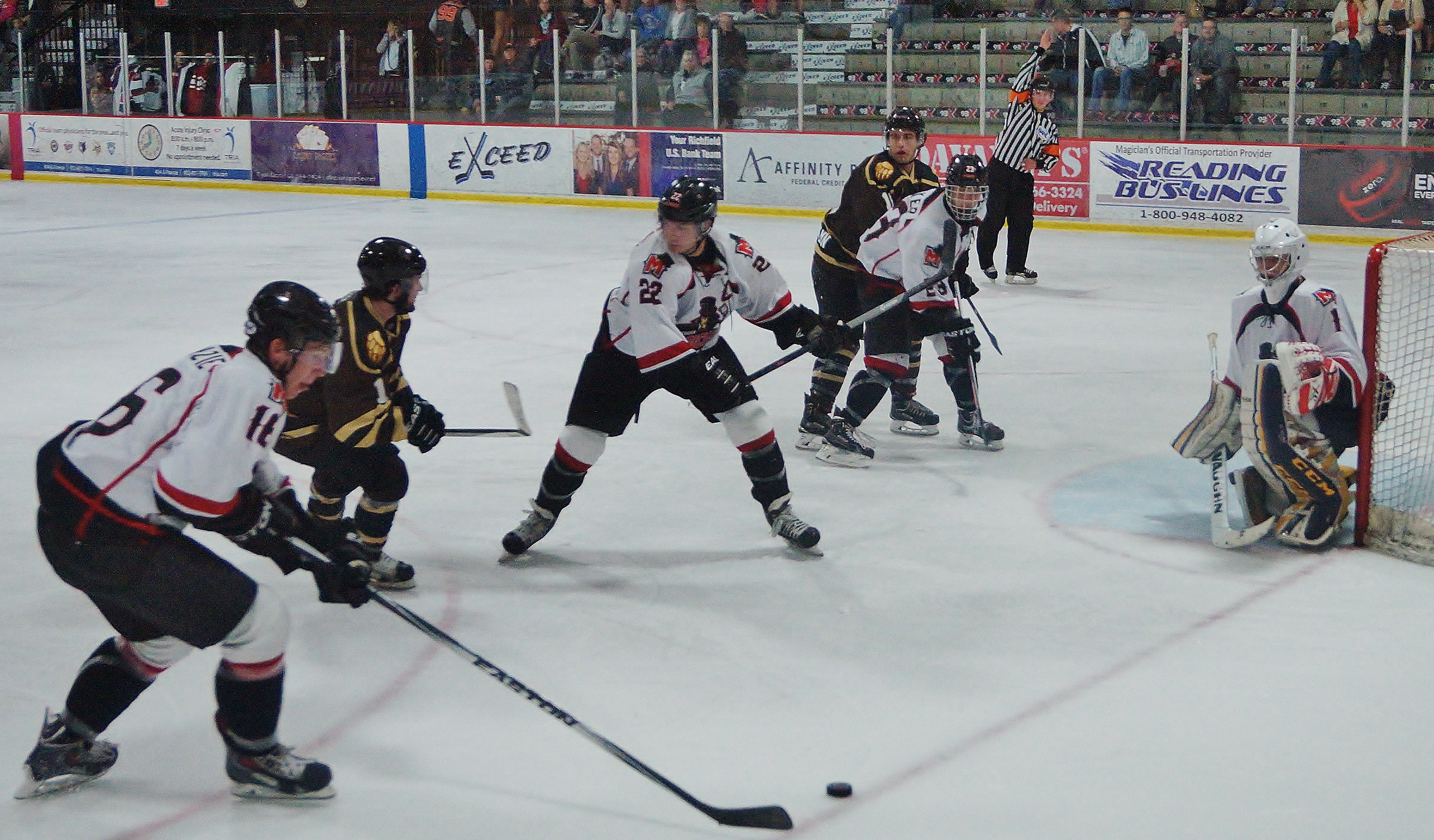 The Magicians drew a five minute major on this play. In a delayed penalty situation and a Magician almost touching the puck, a Magician defender lines up a Kenai player with his elbow with the Ref's eyes on his back dropping the Kenai player to the ice.

A minute after the tying the game and with the second period winding down, the Magicians Kane Durment tied up the Kenai defense and snapped the puck into the net to put the Magic Men up 4-3.  Matt Colford and Tony Uglem got the assists.  The Magicians drew a penalty after the score.  Kenai River’s Tyler Andrews/Anchorage AK scored 16 seconds into the power play.  The second period ended in a 4-4 tie with the Magicians working hard in their defensive zone to preserve the tie.

When it is over, it is Davanni’s Pizza time!

The Magicians came out with pressure in the third period.  Kenai River’s goalie, Quinn had to make some tough saves, but he could not stop the Magicians’ Marc Michaelis/Mannhhiem GER.  The aggressive play of the Uglem and Colford’s line tied up the Kenai defense in the Brown Bears zone for over a minute and resulted in a Brown Bear penalty.  Michaelis’ line replaced Colford/Uglem on the following faceoff and a minute into the power play, Michaelis buried the puck from the left faceoff circle.  It was the winning goal.  Magicians led 5-4.  Sam Becker/Roseville got the assist and it was Pizza time at Davanni’s Richfield.  Any ticket holder from Friday’s game is entitled to a free pizza because the Magicians scored 5 goals.

Kenai River sagged after the fifth Magician score.  They tried to mount some pressure, but the Magicians just moved the puck and continuely were forcing the play into the Brown Bears’ zone.  With six minutes left Durment scored an insurance goal, Michaelis and Thomas Delaney got the assists.

Kenai River beat the Magicians 5-1 Saturday to avenge their Friday loss.  The Brown Bears built three goal lead in the first half of the game on goals by Tyler Andrews, Jack Murphy, and Tanner Schachle and added to goals by Jack Gessert in the third to win 5-1.  The shots on goal were fairly even (33-29).  After keeping their defense together in Friday’s game, the Magicians’ defense struggled in this game.  Brandon Loven got the lone Minnesota goal.

Heading into next week’s play, the Magician are in second place in the NAHL’s Midwest Division behind the Minnesota Wilderness.  The Magician’s will travel to Cloquet Saturday for an early season battle for first place between the two contenders.

The Wilderness beat Fairbanks twice this past weekend, 4-3 and 5-3 (they have given up three goals each in their last four games).  Jesse Norling/Blaine and Jack Forbort/Duluth East led the Wilderness to Friday's win each getting three points.  Forbort got the winning goal 10 seconds after Fairbanks had tied the score 3-3 halfway through the third period.  In Saturday’s 5-3 over the Ice Dogs, Tyler Cline/Blaine, Tobias Bjorklund/SWE, Robb Stautz/Roseville MN, and Darian Romanko/Shoreview MN scored.  Stautz got the winning goal.  Goalie Brock Kautz/Rochester MN got the win Friday; Ryan Anderson/Roseau MN got Saturday’s victory. 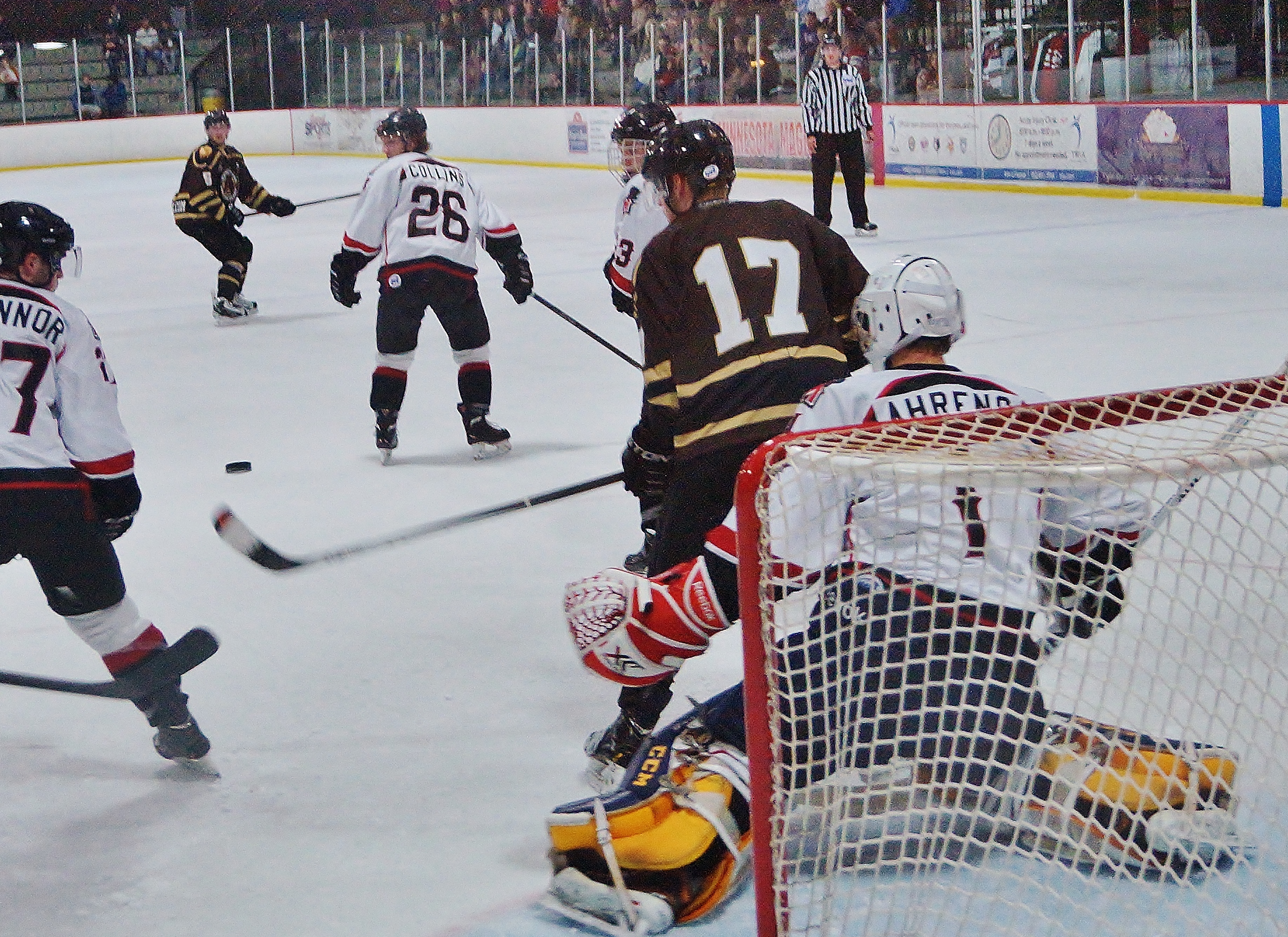 Picture 1 of 4: Kenai's third goal starts with this shot from the blue line. Note the puck is coming right at the camera and on its current path will be at least 3 ft wide of the net. Murphy's stick is in the lower left corner moving up. 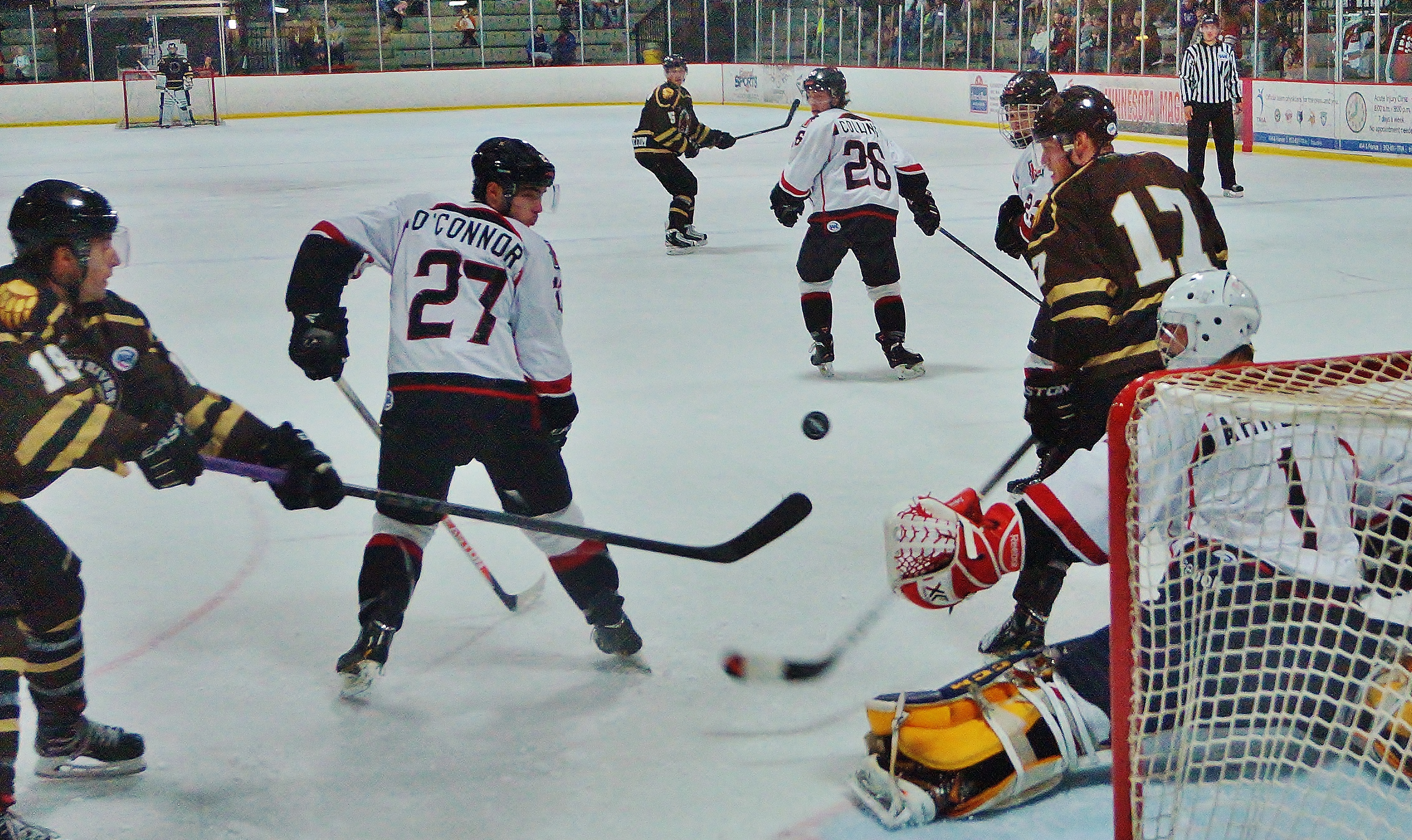 Picture 2 of 4: Kenai's Jack Murphy (#19) has already tipped the puck and changed its path. The puck has been deflected towards the upper left corner and slowed. Goalie Ahrens reacts but can't move his glove the needed foot in the time to block the shot 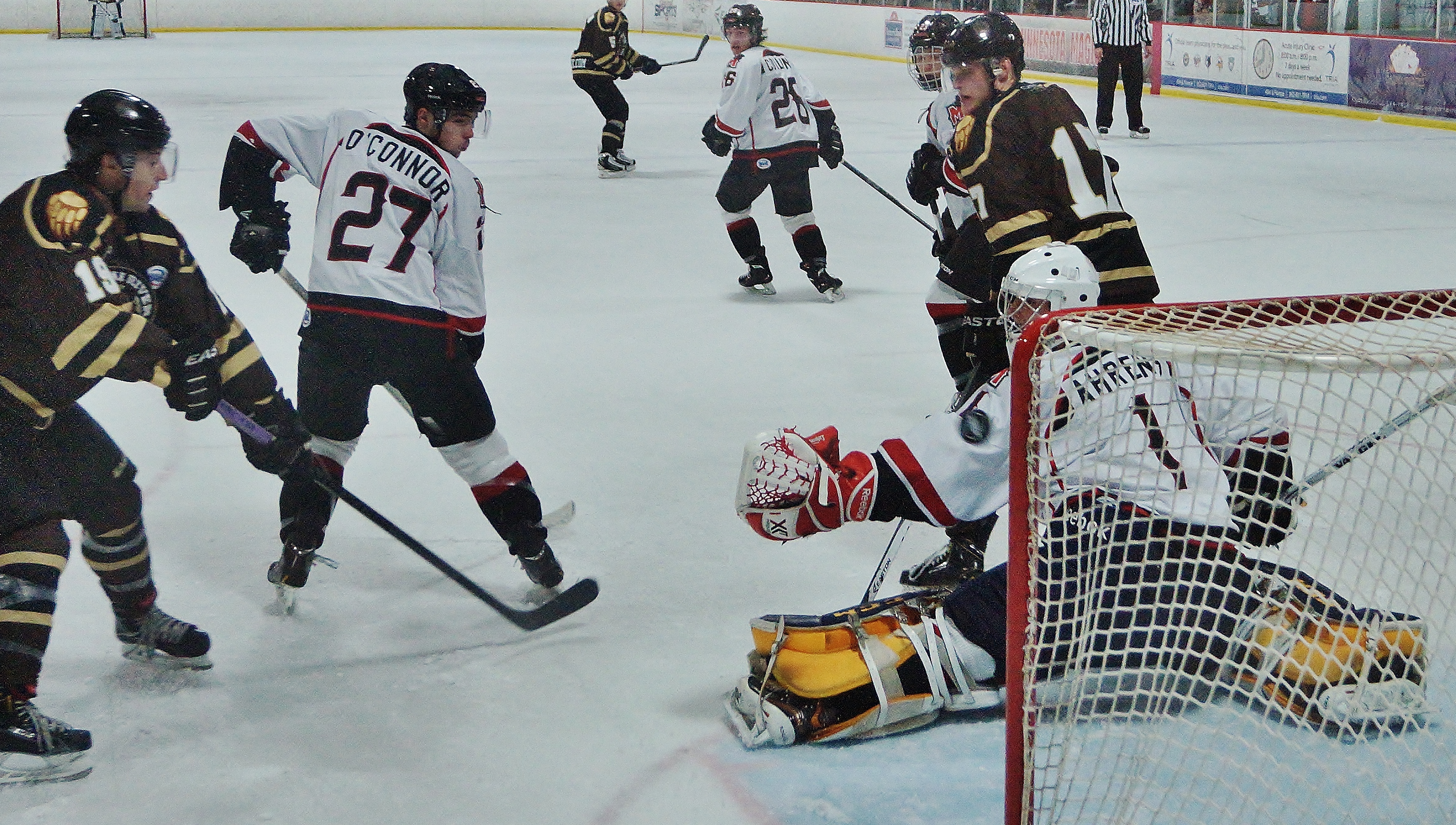 Picture 3 of 4: The puck is now past goalie's Jens Vaughan Ahrens glove and headed for the net. The puck can be seen just past Ahrens' left arm heading into the net. 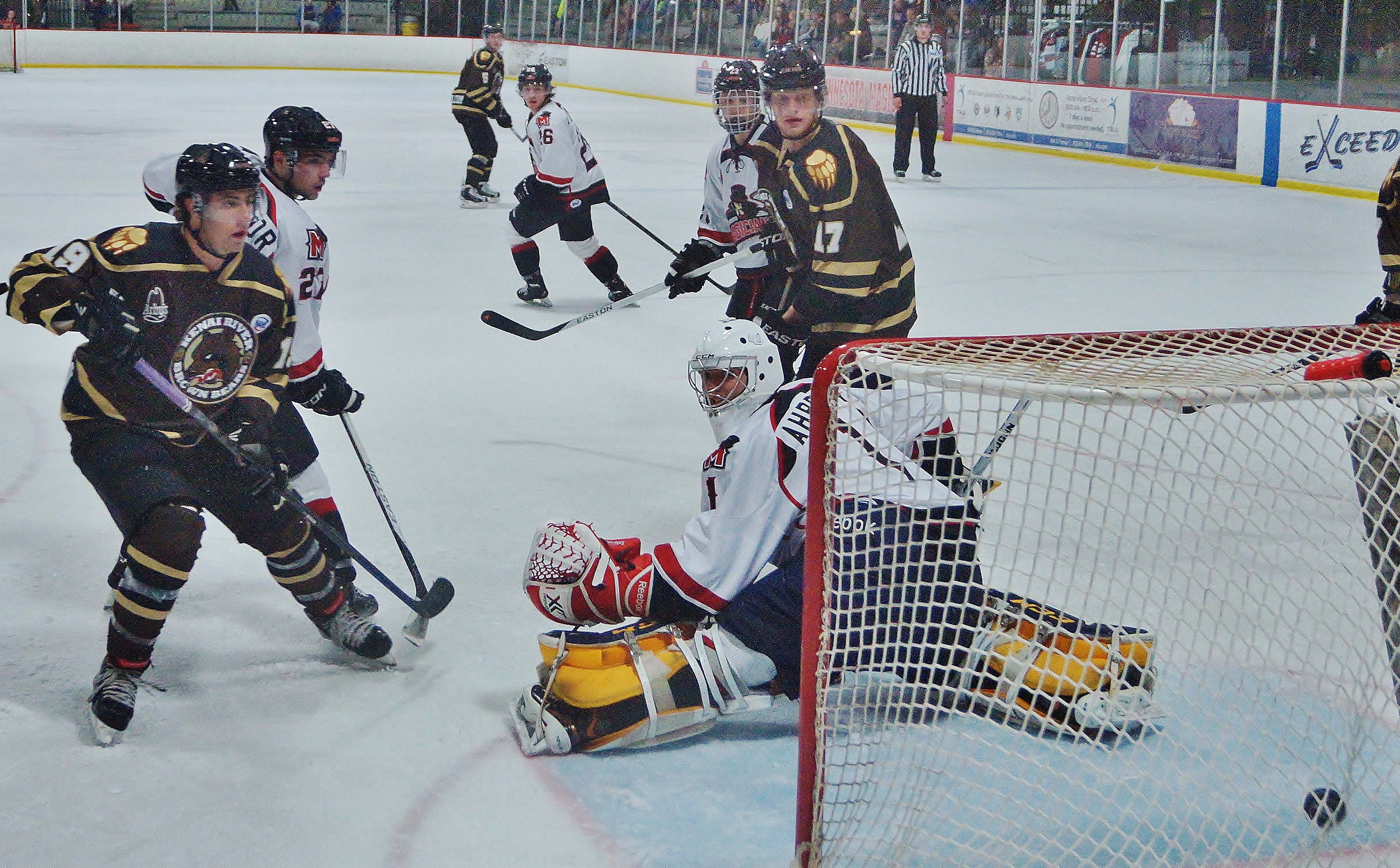 Picture 4 of 4: The puck is in the back of the net. The irony is that Jack Murphy did not get credit for the score as often happens on tips. These pictures were taken 75 milliseconds apart. Reactions at that speed are needed to play NAHL hockey.