The Elite D's Are In!

Cade McEwen bangs the puck to the left boards against U16's

The Minnesota Elite Prep Development League (MEPDL) will join the fray for a berth to USA Hockey’s National U16 Tier I.  The league has submitted declaration forms to USA Hockey stating their intent to participate in USA District/Nationals for the 2014/2015 season.  This means that at least three teams (Shattuck-St. Mary’s, the Minnesota Magicians, and MEPDL) will compete in the Minnesota District tournament next March for the right to represent Minnesota at the U16 level.  The MEPDL will not send a U18 team.

The Upper Midwest High School Elite League (UMHSEL) and the MEPDL cooperate with each other as a before league in Minnesota for high school hockey players.  Generally, the UMHSEL teams have junior and senior high school players on its rosters; the MEPDL teams have sophomore and freshman players on its teams.  But that is not a strict rule.  Basically, the UMHSEL has fixed its league to six Minnesota based teams and Team Wisconsin.  At various times during the season, teams like the Colorado Rampage and the Chicago Fury, and USA Hockey’s U17 team will play a round of games as part of the league schedule.

Players from the MEPDL are often called up to fill a UMHSEL team roster at various times during the season and a MEPDL select team will play a round of league games on an October weekend.  The UMHSEL and the MEPDL each has its own season ending tourney; but a select MEPDL team plays in the UMHSEL tourney replacing Shattuck (Shattuck usually plays the following week the CCM International Tourney with two UMHSEL select teams, Minnesota Red and Minnesota White, and five other teams from Canada and the USA.

Each July, the Upper Midwest High School Elite League has its tryouts.  The top players in the state usually make a spot on one of the six UMHSEL teams.  Those not making a spot are encouraged to try out for the MEPDL in early August.  Players making the MEPDL teams can be “called” to play on UMHSEL teams during the season.  Often, as an UMHSEL player moves on to junior hockey, an MEPDL player will take his spot.  The MEPDL teams are heavily loaded with high school players in their junior year.

This year’s MEPDL has nine teams and like the UMHSEL will play teams outside the nine league teams as part of normal play.  Each team plays a 18 game schedule.  Team Wisconsin has a U16 team and a U15 team.  The U15 team plays in the MEPDL.  Last weekend, the Badgers U15 team lost twice to MEPDL teams while the Badgers U16 team was playing Shattuck’s U16 team in Green Bay WI (winning 5-3 and losing 6-3 and 6-5 to the Sabres).  The Badgers’ U15 team plays as a ninth team in the league.  Last season, the Badgers posted a 8-12-1 record.  Norway, So Minn (Rochester MN based), Shattuck’s U16, Canadian, and North Dakota teams will often be added to the league schedule.

Like the UMHSEL, the MEPDL teams have double names, a color and a general area that the players are drawn from except for the U16 team this year.  No team names show up on their jerseys in the pictures, so a team’s color will be used often in these write-ups.

The U16 team (the Gold) and another MEPDL select team (the Grey) played in the Showcase at Blaine two weeks ago against U16 national competition.  Both MEPDL teams posted a winning record at the Showcase.

Northeast (White) and West (Maroon) are tied for the league lead halfway through the season.  The Northeast team has six Grand Rapids teams on its roster; most of its players play high school hockey on the Iron Range or in the Duluth Area.  The West team has players on it mostly from the Twin Cities western suburbs (Edina/Wayzata/Maple Grove) but also have players from St. Cloud and as far south as Luverne. 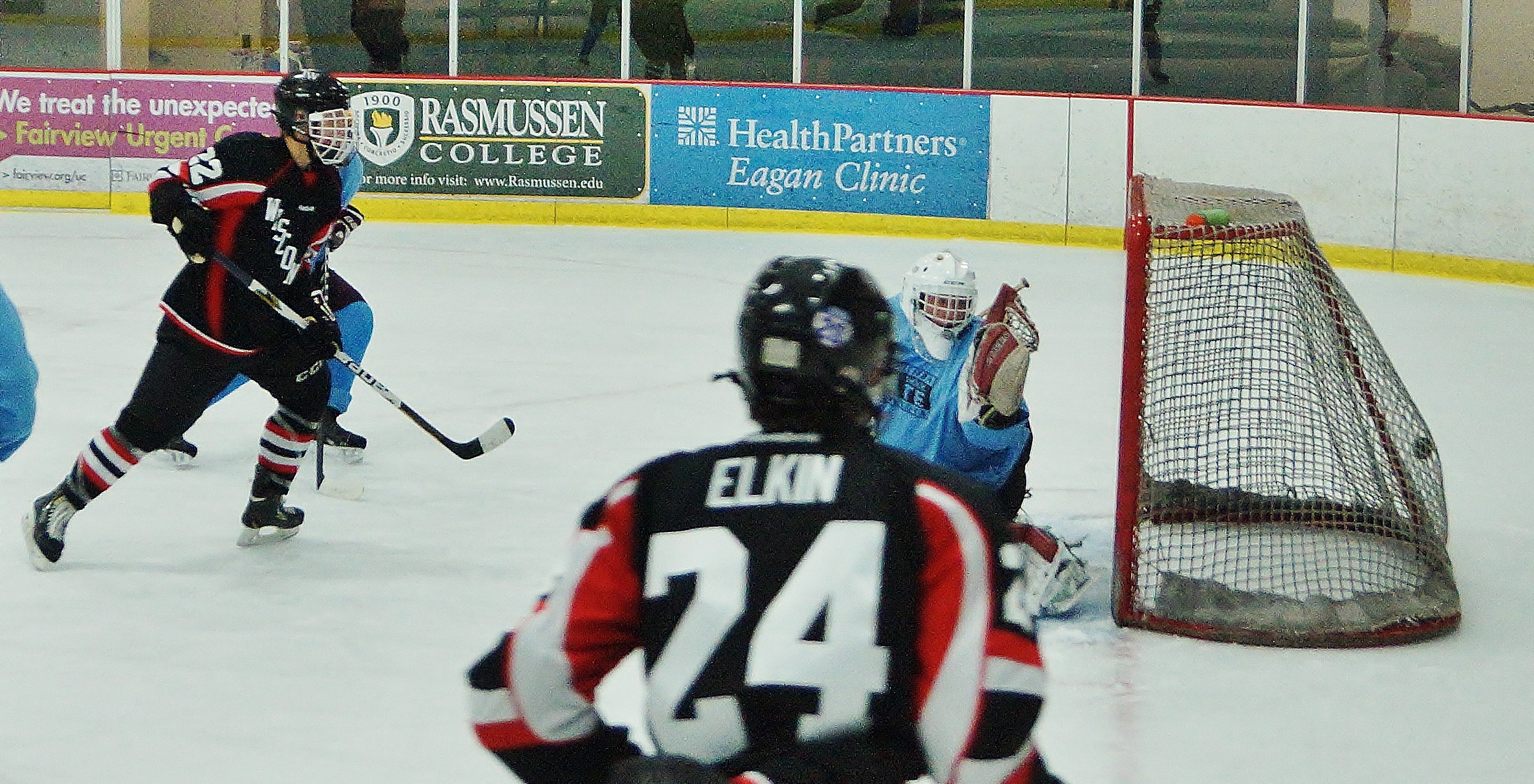 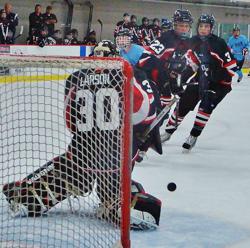 Metro Northeast (Orange) and Metro Southwest (Red) are in third and fourth place.  Ten of the Orange players play hockey for Stillwater and Hill-Murray high schools.  The Red roster is populated with players from the South Suburban high schools (Burnsville, Farmington, Lakeville North, and Lakeville South).  Metro Southeast (Grey) and Metro Northwest (Green) are in fifth and sixth place.

The Northwest and U16 teams are in seventh and eighth place.  Players from the northwest corner of the state dominant the Northwest roster.  The U16 team is the core team that will represent the MEPDL in the Minnesota District tourney and consists of ninth and tenth graders.

Three games were played Sunday morning at the Eagan Ice Arena.  The games featured two potential U16 National tourney teams, Team Wisconsin and the MEPDL U16.

The So Minn team consists of player from the Rochester area and the Big Nine Conference.   They are playing seven MEPDL games this season and with the win over Team Wisconsin have a 3-3 season record.  The Badgers lost twice on the weekend and have 1-7-1 record.

The Badgers’ U16 team took a 1-0 lead in the first period on a Cale Bowman/Wausau West score, built the lead to 3-0 and lost the game in the final minutes of the third period giving up two power goals in the last four minutes of play.

Peter Verstegen/Oshkosh North and Jack Gorniak/West Salem scored in the second period to put the Badgers up 3-0.  That is when the So. Minnesota players went to work.  They built pressure on the Wisconsin defense as the period progressed.  With 12 minutes left in the game, Judd Schulz/Mankato East scored to cut the Badger lead to 3-1.  Brandon Ratzloff/Rochester Marshall got the assist.  Three minutes later, the So Minn team took a tripping penalty.  With the clock winding down and on the power play, the Badgers looked in control of the game.  Then they lost control.

Thirty seconds into the Badger power play, So. Minnesota’s Ben Papke/Northfield scored a shorthanded goal that turned the game around. Minnesota trailed by goal 3-2 with 6 minutes left in the game.  The game got tense.  Rochester Marshall’s Isaac Lamppa and Josh Frerks got the assists.  The shorthanded goal fired up the So Minn team.  They scored twice after that penalty.  It was not so much that the Badge defense sagged, but that the Minnesota team came up with two exceptional plays. 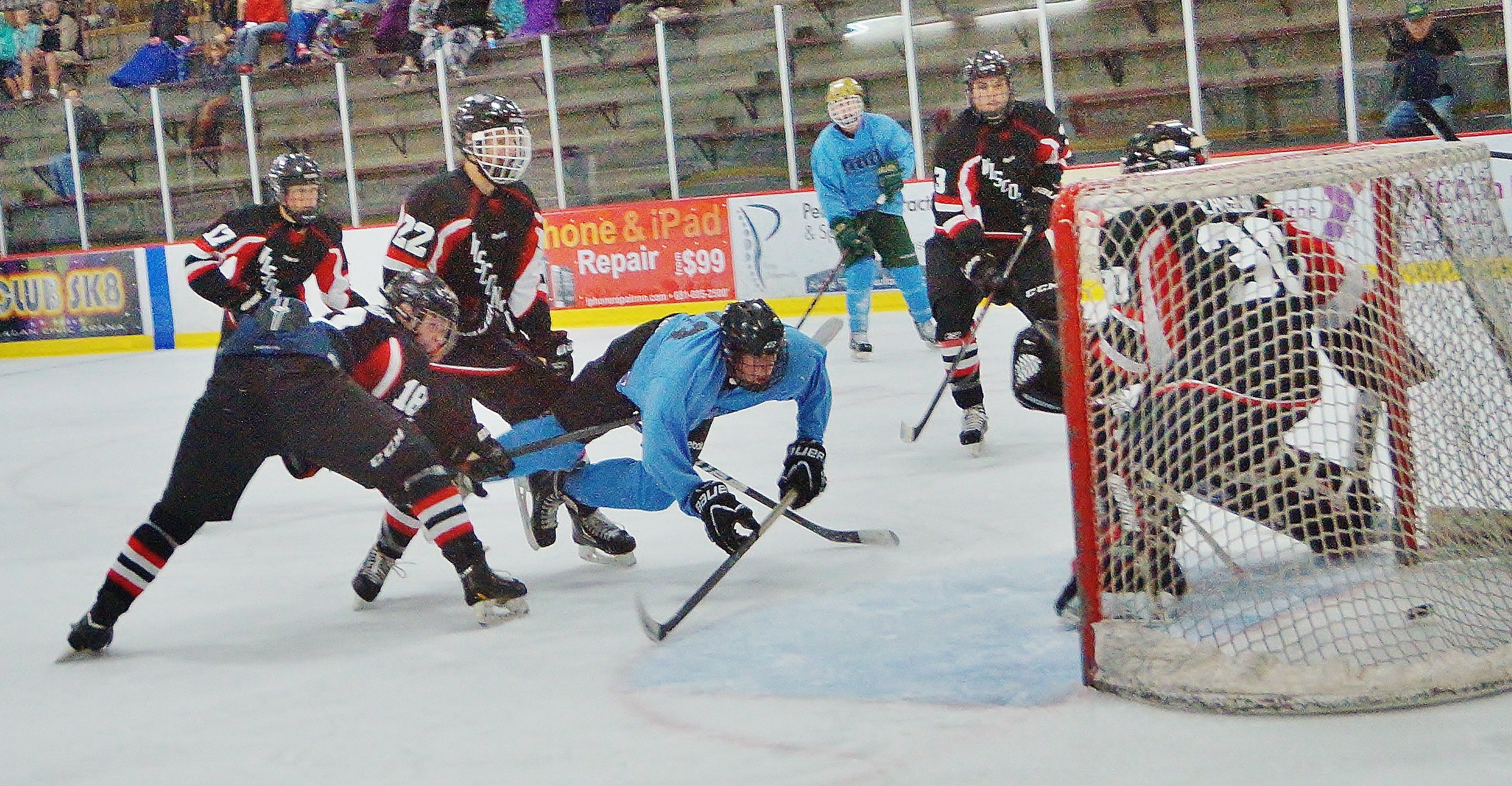 So Minn's Judd Shulz dives to get his stick on a hard sliding pass from the right to score the tying goal 3-3 against the Badgers U15 team.

The first play came two minutes later Wisconsin drew a tripping penalty.  Minnesota set up in the Badger zone and they were trying to move the puck and catch the Badgers over shifted on a weak side play.  Thirty seconds later, a South player managed to thread a needle with a pass that slid across the top of the crease.  Judd Schulz came out of nowhere from the top of the slot diving to tip the sliding puck into the crease to tie the game.  Tyler Loe/Mankato West and Anthony Oliveto/Rochester Mayo got the assists.  It was a totally unexpected play to most fans.  It was a great play only to be topped by the game winner a few minutes later.

With less than two minutes left, Team Wisconsin drew another penalty for elbowing.  Again, Minnesota set up in the Badger zone on the power play.  Again they try to hit the weak side play with Badger defense well aware of their intentions and blocking every opening.  Still Ratzloff managed to thread the needle with a hot pass from the right side to the open slot left of the net.  Defenseman Andy Carroll/Northfield timed the hot pass perfectly from Ratzloff moving from his defensive post on the left blue to hit the puck in stride 10 feet from the net and bury the puck in one motion.

It was a great pass and a great move by defenseman Carroll to come low in the slot recognizing an over shift right on the Wisconsin defense.  Ratzloff and Lamppa got the assists.  The goal won the game. 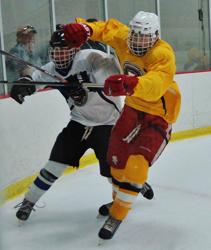 White and U16 players clash in Sunday's 4-1 game won by White.

It may be a surprise to some, but at YHH.  The White beat the U16 behind a hat trick by John Hartfiel, a 2012 YHH Top 50 peewee A pick who played for the Minneapolis Storm.  Of course it helps to have Nolan Sullivan/Lakeville South, another 2012 YHH Top 50 peewee A pick, as a line mate.  The two combined on all four White goals.  Sullivan scored and assisted Hartfiel on two goals.  Hartfiel’s third goal was unassisted.  Cade McEwen/Hermantown had another good game in the nets.

The U16’s Griffen Ness/Wayzata scored the lone Gold goal with 30 seconds left in the game.  Ness had a good game Sunday and has showed steady improvement over the past year.  The Gold had  good a Showcase tourney the week before beating Pikes Peak 4-2, losing to the Minnesota Magicians 3-1, losing to Team Wisconsin U16's 5-4, beating Everett Jr Silvertips 9-3, and easily beating the Fairbanks Artic Lions, but like the Badger U16’s struggle against the junior laden MEPDL teams.

Forward Chase Brand/Park Rapids and defenseman Cameron Buhl/South St. Paul are leading the U16’s in scoring.  Brand and defenseman Justin Kelley/Maple Grove has the most goals.  Hill-Murray’s duo of Kyler Yeo and Dylan Mills has added some scoring punch, but with more than 20 skaters on the roster, the team has not settled yet.  Goalie Ryan Bischel/Benilde-St. Margart’s has played well for the Gold.

The Orange scored late in the opening period on a power play goal by TJ Sagissor/Stillwater and held on to that goal lead to win 4-3.  Luke Ranallo/Hill-Murray scored for the Metro team late in the second period to put the Northeasters up 2-0 only to have Northwest’s Maxfield Oelkers/Warroad cut the lead to 2-1 thirty seconds later.

Sagissor scored early in the third period to Metro up 3-1.  That score held until Seth Benson/Moorhead scored for Northwest with under 4 minutes left in the period to cut the lead to 3-2.  Forty five seconds later, Metro’s Landon Lushanko/Chisago Lakes scored to put Metro up 4-2.  Lushanko’s goal turned out to be the game winner when Northwest’s Jack Stensgard/Moorhead scored in the last minute to make a one goal game 4-3.  Metro outshot North West 17-6 in the second period.

League leading West (Maroon) travels to Faribault for a Thursday game against Shattuck.  Saturday and Sunday the league returns to Eagan for 11 games (seven Saturday).  The Sr League plays two games on the weekend playing Team Wisconsin’s U15’s and Northwest.  The Badgers U15’s also play games against the Metro Southeast and Metro Southwest teams on the weekend.  Sunday at 9:00 AM, the two teams tied for the league lead, West and Northwest play each other.