Hibbing Sophomore Phenom ends Recruitment with a pledge to the Bulldogs 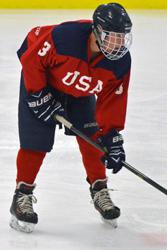 Two years ago a very trusted source told YHH that there is this defenseman from Hibbing that is blowing up the Iron Range. He was small and had a really long last name is all we remember. Last year, all we heard about was number 7 from Hibbing. We first asked, "is he small and have a really funny last name?" Yep, that is the guy.

We then saw him play a few times. The Blue Jacket Bantams came to town twice last year, we saw him have his way with the metro Bantams on both trips. We liked his game so much, he was named a finalist for the YHH Bantam Player of the Year. Later last Spring, we saw him again at the U16 Festival in Plymouth against the best in MN. He did so well, he was invited to the National Camp in New York.

On Wednesday, the sleek skating Defenseman with incredible hands ended his recruitment and gave his verbal commitment to Hibbing native Scott Sandelin and the UMD Bulldogs. He was being pursued by several schools, but ultimately chose the Dawgs over another the dog, the St. Cloud St. Huskies. 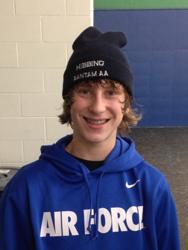 Perunovich in February '14 after being name POTG by YHH

YHH caught up to the Hibbing Sophomore Wednesday to get his thoughts on why he chose UMD. "I chose UMD because it was close to home and I knew so many of the players that are coming here and how good they are. It is very exciting."

Like so many of the players who commit to a Division I school, Perunovich expressed his gratitude to his mom and dad and the rest of his family and friends for helping him get to this point of his young career. "My family and community have been very supportive of me and all of the Hibbing players dating way back to when we were really little."

Despite being smaller in size, this has never hurt his ability to make an impact on just about every shift. As a Sophomore at Hibbing, he lead the entire team in scoring with 11 Goals and 42 Assists. He is a phenomenal playmaker who makes even the Zamboni driver look good in Hibbing.

RT @2012mnblades: 12 Elites take home The Battle for the Windy City title! It’s an honor to bring back to back titles home to our Blades fa…